The Ministry of Agriculture of Iraq projects its planting area for Barley in MY 2022/23 at 699,829 ha. Considering the low rainfall and the reduction in the surface water discharge by the upstream countries, it is expected that no more than 50 percent of the above-planned area will be harvested. The USDA forecasts MY 2022/23 Barley production at 280,000 tons on a harvested area of 210,000 ha. MY 2021/22 Barley production was forecast at 418,000 tons.

Water shortages devastated Iraq’s Barley crop, and the low production is expected to continue into MY 2022/23. In the C&S, total production was 267,000 tons, with Qadissyia Governorate producing the most at 65,000 tons, or 24 percent, of the crop. Barley production in the rain-fed zones in this region was only 5 percent of total production. The KRI produced 151,000 tons of Barley in MY 2021/22.

The USDA forecasts total Barley consumption in MY 2022/23 to reach 1.15 million tons. The consumption of Barley in Iraq is used primarily as animal feed for cows, sheep, and goats, more so than feed-grade wheat. The drop in Barley production severely impacted livestock producers in Iraq due to a sharp increase in feed prices. A small amount of Barley flour is used for human consumption and imported mainly from Turkey and Iran.

Barley ending stocks to reach 109,000 tons in MY 2022/23. Smaller production in the current and forecast marketing years put downward pressure on stocks. Also, because of the lower production, the market price of Barley has exceeded the MOT (the Ministry of Trade) announced prices. This, as well as the lifting of subsidies on the inputs, led many farmers to not market their Barley to Government silos as in previous years and instead sell their grain on the local market.

Iraq does not import substantial quantities of Barley. However, MY 2021/22 production of Barley was very low and insufficient to meet local market demand. As a result, MOA decided to allow the import of 1.5 million tons of Barley over the next year to be imported in two lots of 750,000 tons every six months. The private sector will carry out the imports against licenses issued by the MOA. Each license should not exceed 40,000 tons.

According to AgFlow data, Romania led Iraq’s Barley import market with 0.1 million tons in 2021 – 2022, followed by Russia (0.06 million tons) and Argentina (0.02 million tons). The USDA forecasts MY 2022/23 imports of Barley is forecast to reach 750,000 tons. In MY 2020/21, Iraq exported 700,000 MT of surplus Barley to Iran in compensation for its debt incurred for the import of natural gas from Iran. Selling subsidized crop yields in Iraq, such as wheat, Barley, and corn require ministry approval. 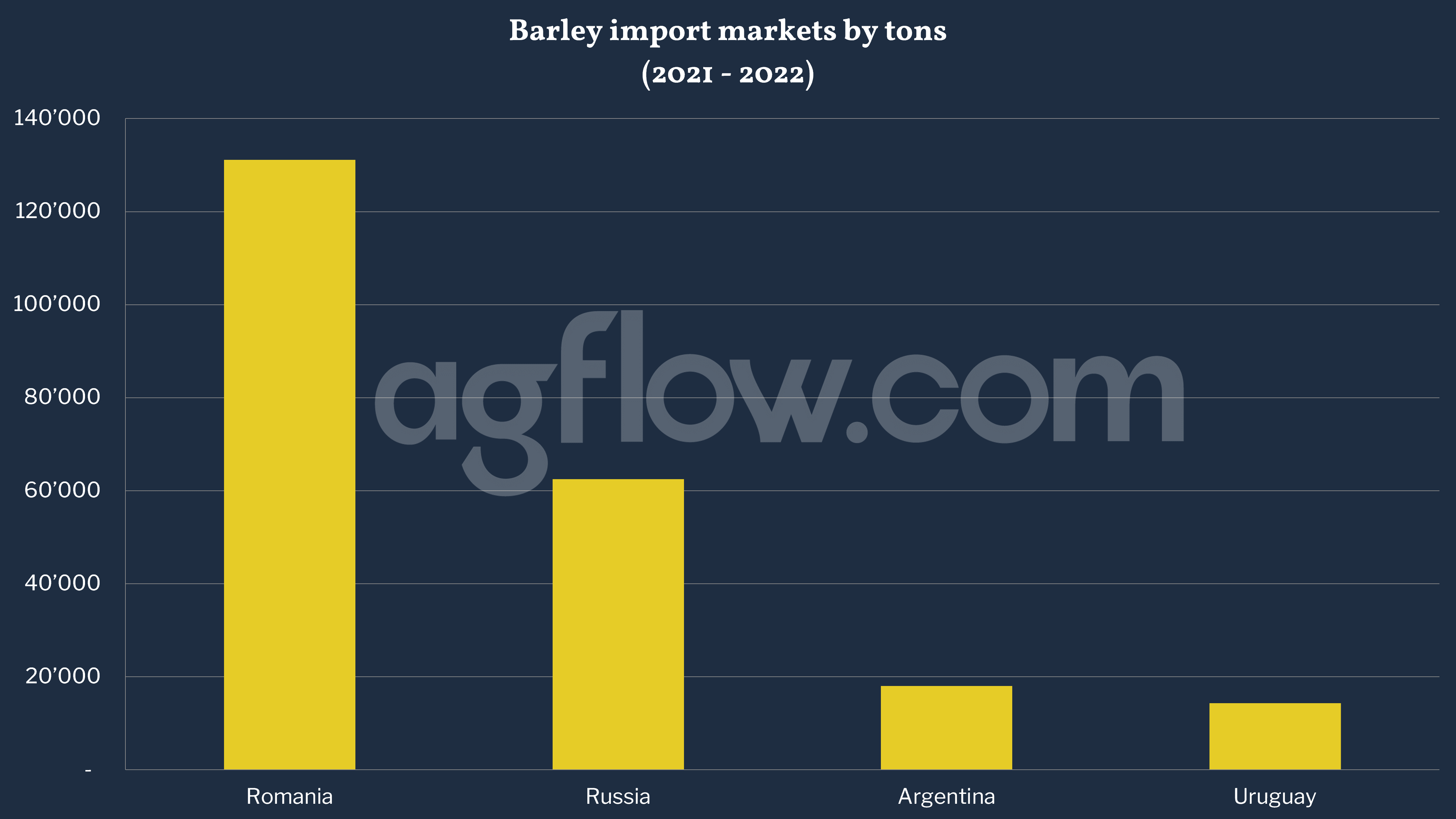 MOA completely lifted its input subsidies on Barley production in MY 2022/23. Farmers are no longer able to purchase seeds at 70 percent of their value, fertilizers at half price, or receive free pest spraying. The MOT buys Barley from farmers at a set procurement price of 420,000 dinars/tons ($290/tons), the same price as third-grade (feed grade) wheat. Barley is then distributed to livestock farmers through many state-owned firms. The USDA expects that higher purchasing prices for Barley will be put in force in MY 2022/23.

Companies affiliated with the MOA purchase domestic Barley from farmers. These firms then resell the grain to farmers and fisheries as feed at a reduced rate. Animal breeders may buy up to 30 tons of Barley per season. Currently, farmers pay 200,000 dinars/ton ($138/ton) for Barley. Often farmers keep a large share of their Barley production for feeding livestock throughout the year.