Evolution of French Wheat Prices, a Breakdown by Protein Level

French Wheat Prices and the spread between the various protein level products are critical to grasp the market in its entirety. The Wheat Prices are for Milling Wheat products and focus on the price gap between protein levels. This difference is essential for stakeholders as it can drastically change cargos’ price and result in significant losses or gains. Following the German study, understanding the French market requires looking at the Wheat Price curves by protein levels in conjunction with the Wheat Price’s correlation and collinearity statistics. The evaluation of this data will provide insight into the market and understand how to address it.

Conversely to Germany, in 2018, there are several Wheat prices available but only for two different protein levels. Many additional Wheat price quotes appeared and disappeared between Sep 2018 and Sep 2020, with new protein levels introduced for those. As such, a first look at the data highlights that the most quoted Wheat price is for 11% protein level Wheat. Looking at price coverage will provide more insight into the reason as to why this is. 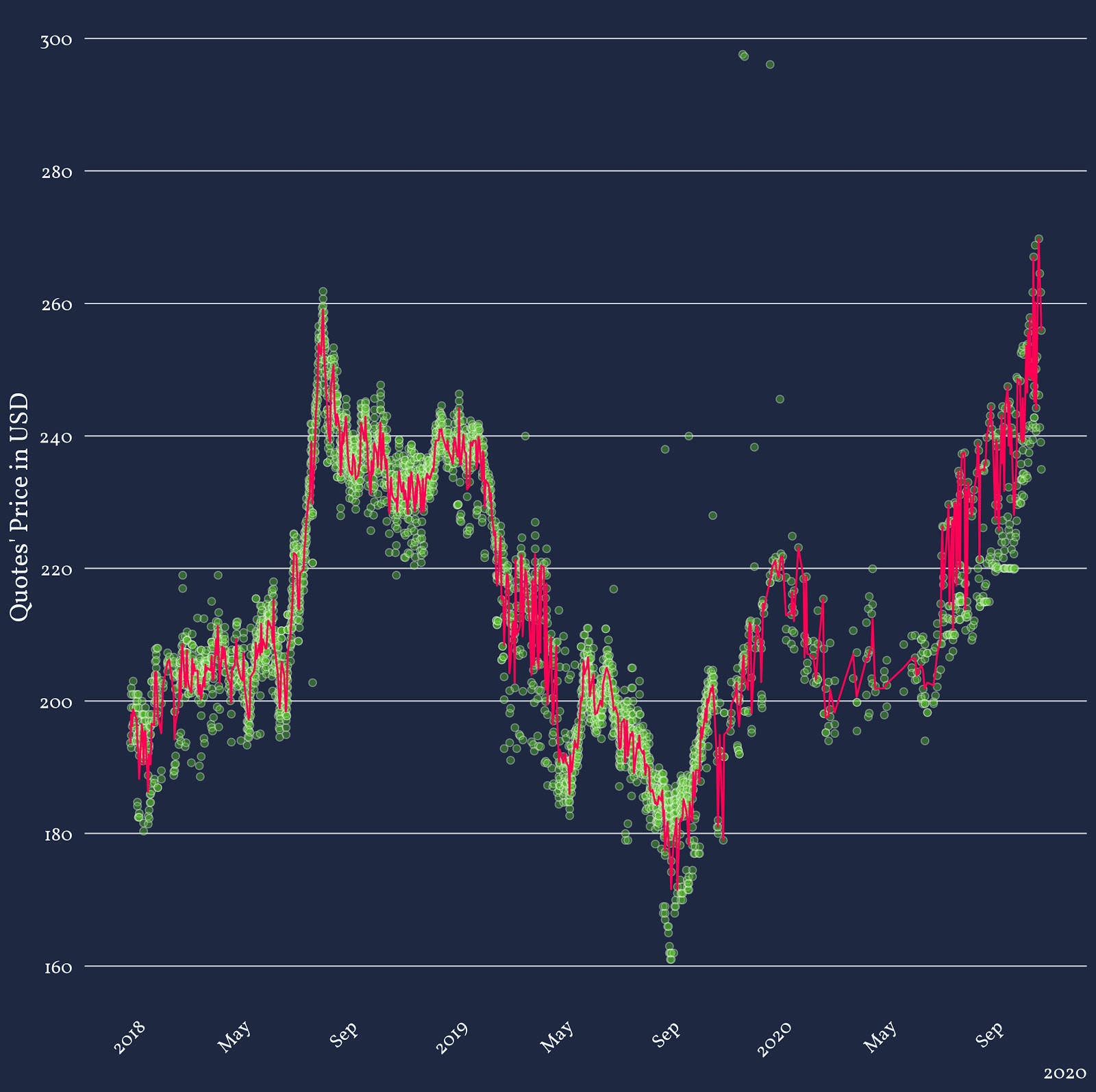 In this instance, the curve and points in Figure 1 showcase a very different situation to Germany:

Moreover, the seasonal market rally behind 11% protein Wheat for both the 2017-2018 and 2019-2020 campaigns highlight the impact droughts had in the Summer of 2019. That year the rally stopped around July, with prices dropping to their lowest point in this time frame at the end of the campaign. This drop in France’s Wheat prices is due to the hard drought of summer 2019, just the same as for Germany’s Wheat prices.

Remarkably, the start of the bear market for these products is also the inflexion point for 11.5% protein Wheat prices, with CNF going bull. Similarly, the emergence of 13.5% Wheat prices and growth synchronized with the 11% Wheat price curve when the market bulls also indicated this trend. 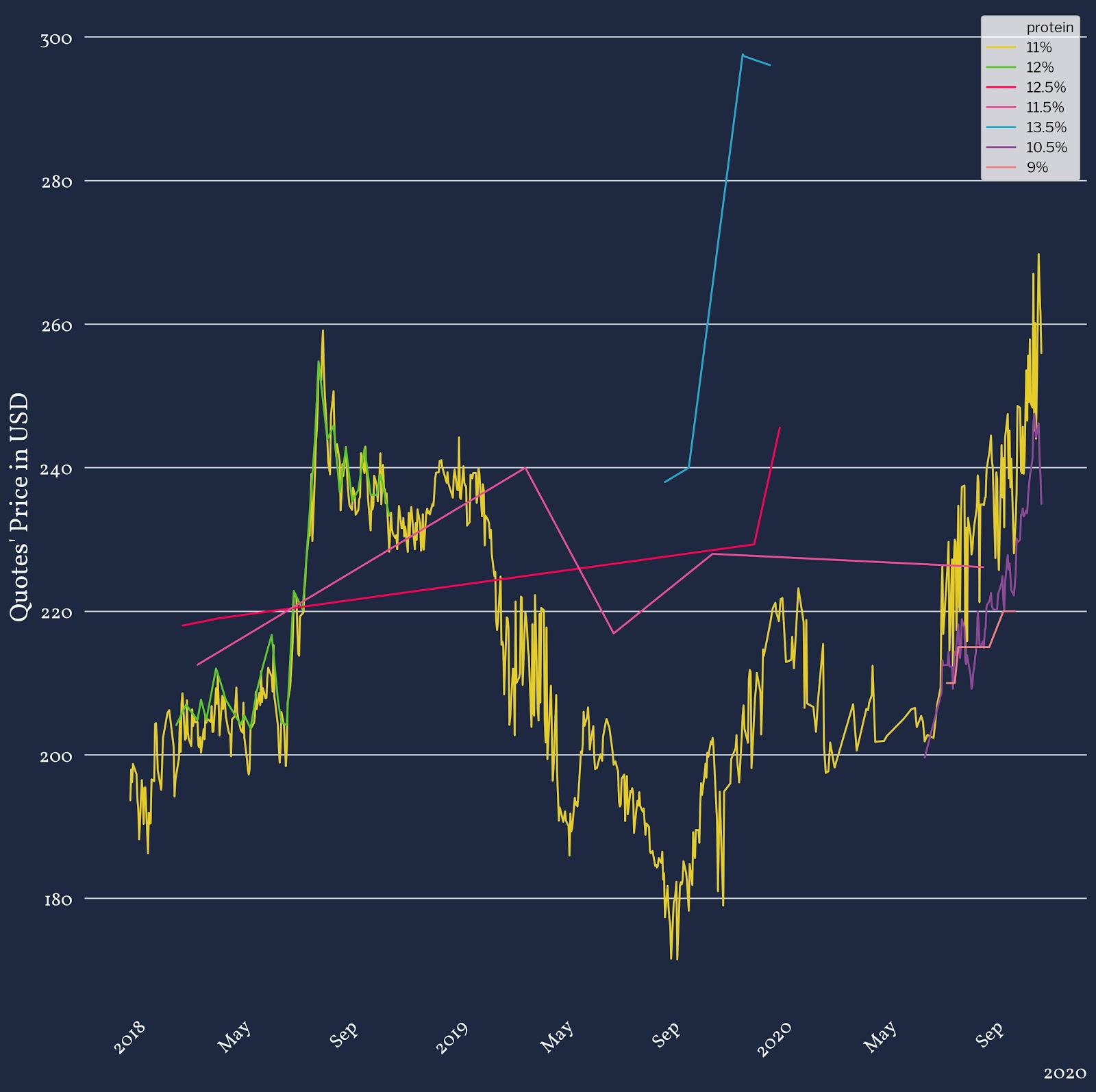 Figure 2 displays the Wheat price curves by protein levels for the French dataset. Although there aren’t many data points for several products, it is still possible to highlight the following:

These two observations provide great insight into the French market. Indeed, for the first point, the fact that these two products appeared at crucial inflection points supports the idea that these products’ purpose was to propose alternatives to the top product and stabilize or boost the market at the end of the 2018-2019 campaign.
Moreover, the lack of data for  13.5%, 11.5%, and 12.5% Wheat prices stresses these products’ strategic purpose even further.

Therefore, France’s 11% Wheat is predominantly driving the French market, since at least 2018, which already differs from the German Wheat market.

However, where Germany had numerous products with various protein levels, the norm for the French market is to view other protein products’ quotations  – namely 9%,  10.5%, and  12% Wheat – during the Spring rallies, probably due to seasonality and better climate conditions, as well as boosting the market rally before the end of the campaign. That said, 13.5% and 11.5% Wheat prices appeared with the necessity to both boost and stabilize the 11% Wheat prices during the 2018-2019 campaign, in bear and bull markets alike. Nonetheless, the limited amount of data for these Wheat prices only shows that it was not a sought-after alternative.

A similar table to the Germany Wheat Price one also provides excellent insight into the French Wheat Price relationships. Following the trends found previously, the table can highlight the trend around 11% Wheat prices.

Figure 3: Table for Correlation and Collinearity for Average Protein Wheat levels For France

The combinations computed in the table for Figure 3 exclude obvious perfect correlations (comparison with the same parity), leaving only combinations between the top products for each origin. Moreover, combinations that had correlations below 0.725 were excluded.

The changes for collinearity statistics between similar combinations are due to the variable dependence in multicollinearity. Perfect correlations between some combinations don’t show relevant numbers for the collinearity test, as (almost) perfect combinations’ p-values are just rounded to 0 since they are so small, and t-values tend to minus infinity.  On the other hand, while some price curves are significantly correlated, they may not be collinear.

This data then shows that France Wheat prices align, correlate, and are collinear with the  11% Wheat price curves. Nevertheless, the long term relationships between Wheat prices are not particularly relevant, as the Wheat prices for products other than 11% Wheat are situational.

The data for the France Wheat prices showed that 11% Wheat prices drove the entire market, and were in fact the only consistent product in time.

Conversely to Germany, where the market demand and weather conditions drove Wheat products and prices to a standardized market, the French market already had a standardized market since 2018. The other various protein Wheat prices are specific to situations and appeared during the end-of-the-campaign rallies or to boost the bear 11% Wheat market. As such, long-term relationships between the Wheat prices are either irrelevant or biased, as they follow the rally.

In conclusion, the French Wheat price market differs greatly from the German one, in all aspects. While the impact of the Summer 2019 drought is also visible, the Wheat prices dynamics are completely different to what was observed in either Germany, with the exception of having a standardized Wheat market, or the Black Sea prices.

However, AgFlow’s French Wheat prices dataset also showed the lack of incentive for premiums on the most consistent protein Wheat prices.

Finally, the impact of E.U. policies is unclear, as the common denominator between Germany and France is a standardized Wheat market, but they also had distinctive dynamics and protein products throughout time. In the end, a country-by-country approach to the market seems to be a better strategy when looking at E.U. cash Wheat prices.

It could also be interesting to look at supply and demand data -and more specifically at the main shipment destinations for both countries – as this could provide an even deeper insight into their European and global Wheat exports.

Read also: Evolution of Wheat Prices on cash markets by protein levels in Germany since 2018