Brazil Corn Cash Prices are one of the most critical parities available in South America. In February, the First Crop harvest—which is also the main crop for Corn—begins. As harvesting continues until March, it is necessary to look at the cash market prices ahead of the end of the harvest. Moreover, in 2021, the cash grain market (and the Agricultural one generally) is a bull one. China’s imports are stronger than ever, and this economic pressure drives the global cash market prices upward.

How have Brazil Corn Prices Evolved Since Q3 2020?

The current bull market rose during Q3 2020. Therefore, understanding the 2021 prices for Brazil Corn requires tracing their evolution from this period until now. 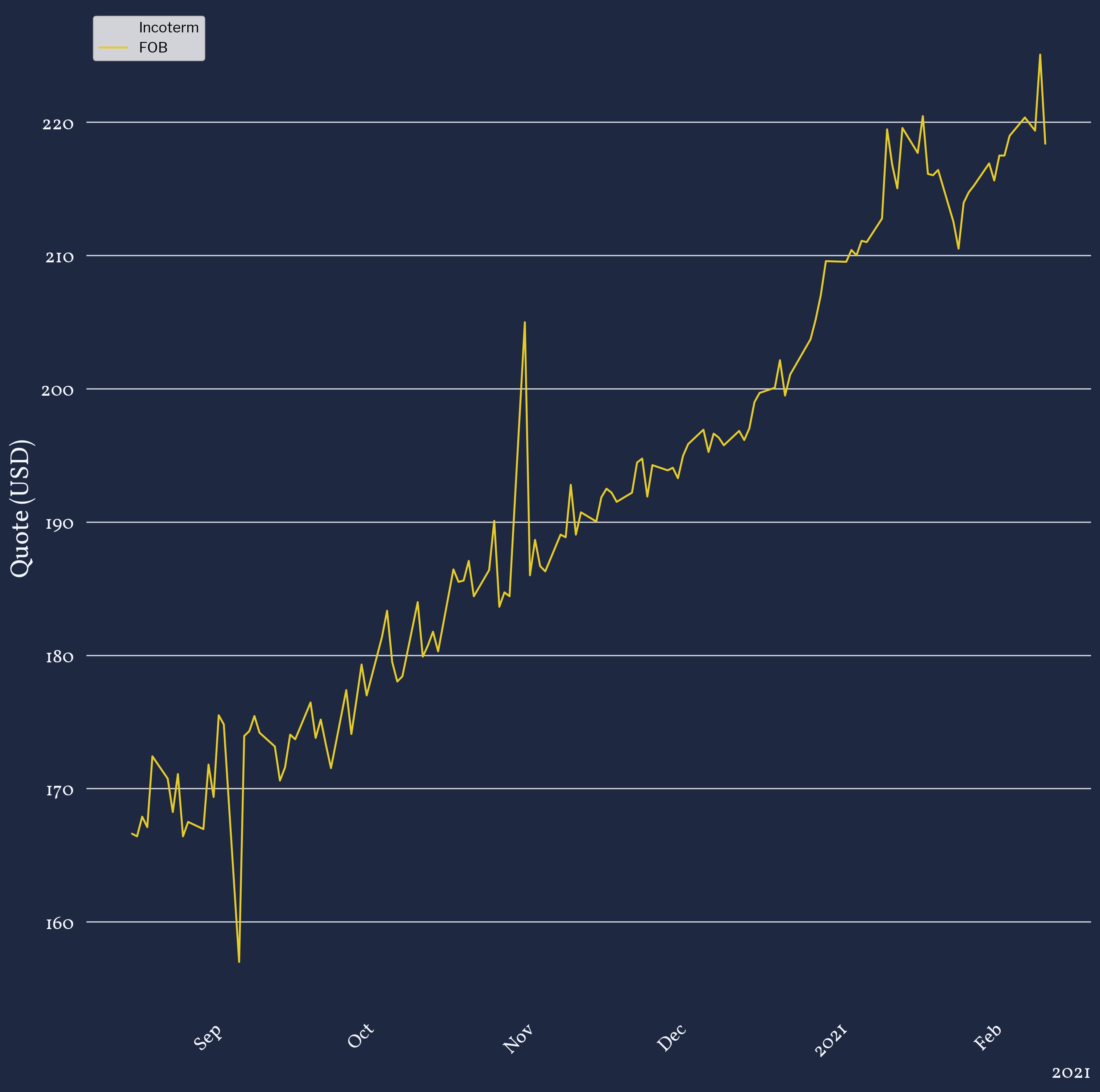 The time-series for FOB prices results from the aggregations of almost 1.5 thousand prices. Thus, prices displayed are not actual quotes but rather indicate the median value of all the FOB Brazil Corn prices recorded on any given market day by AgFlow.

The Brazil Corn FOB cash spot prices increased steadily by around 30% since the beginning of the bull market in September 2020. The time-series shows two important price movements, with the median falling below the 160$ level in Sep 2020, and a steep rise in Nov 2020 with $205 median spot prices.

Although potentially accentuated by the aggregations taking several regions into account, this evolution results noticeably from the bull market and crop yield expectations. The period in Figure 1 is also that of La Nina. This effect induces severe dryness, which hindered planting and expected yields — as shown for Argentina in an article in Gafta World— thus impacting prices, as measurements throughout the off-season changed the expected yields. 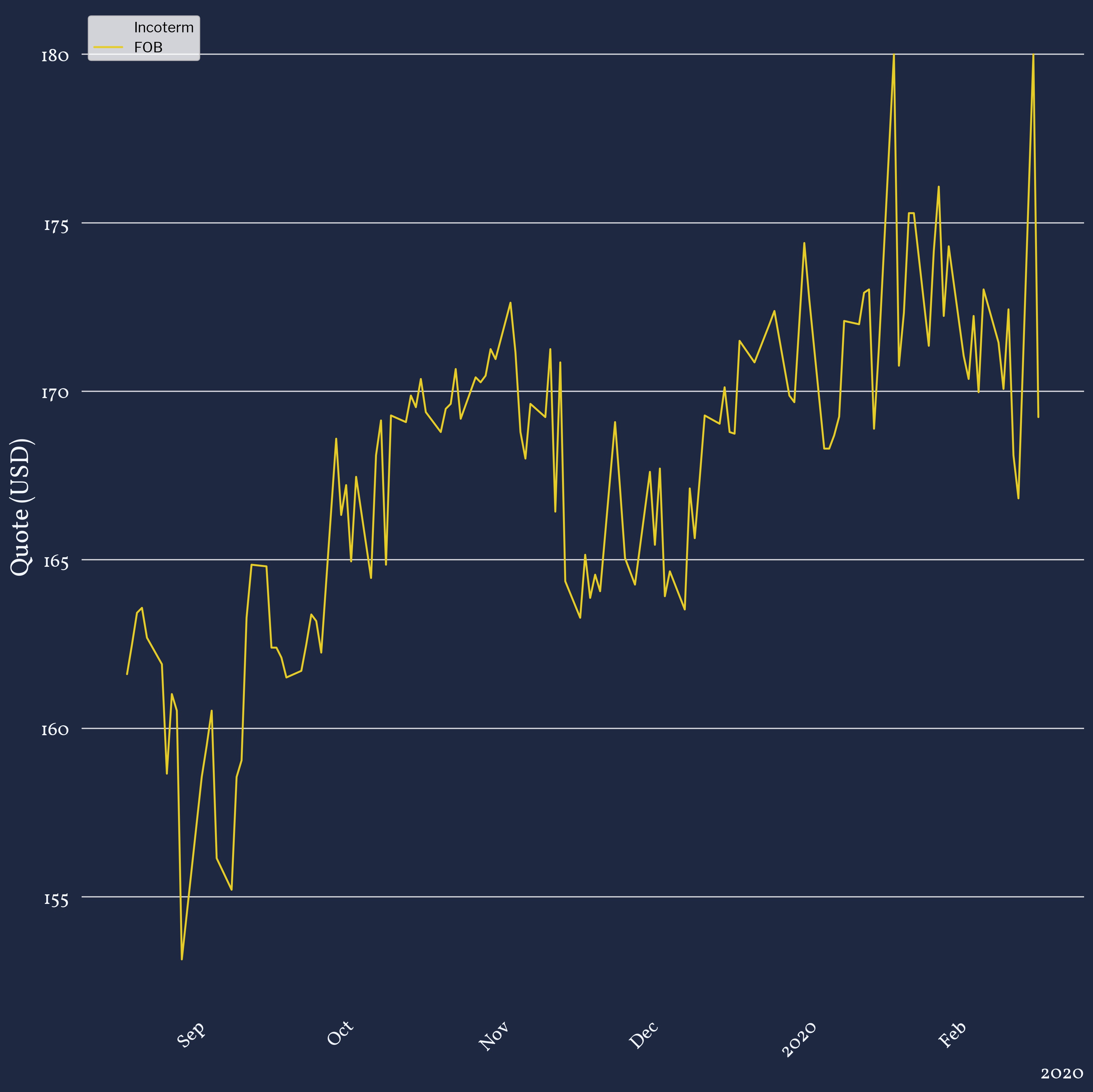 As a comparison, Brazil Corn spot prices last year at the same period, in Figure 2, also increased due to the seasonal rally. However, with higher expected yields and no bull market, prices were around 20% lower than for the 2020-2021 period. 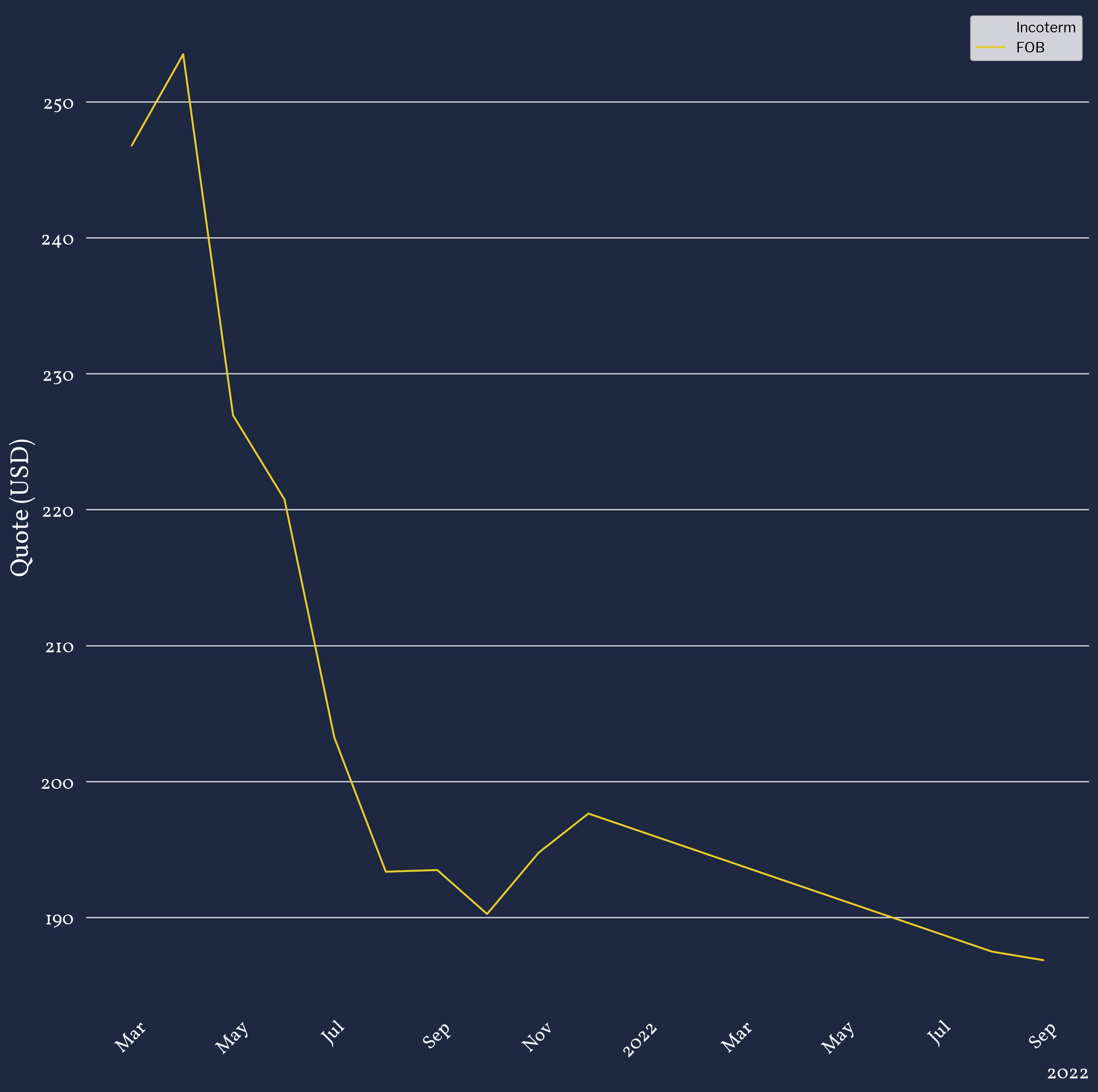 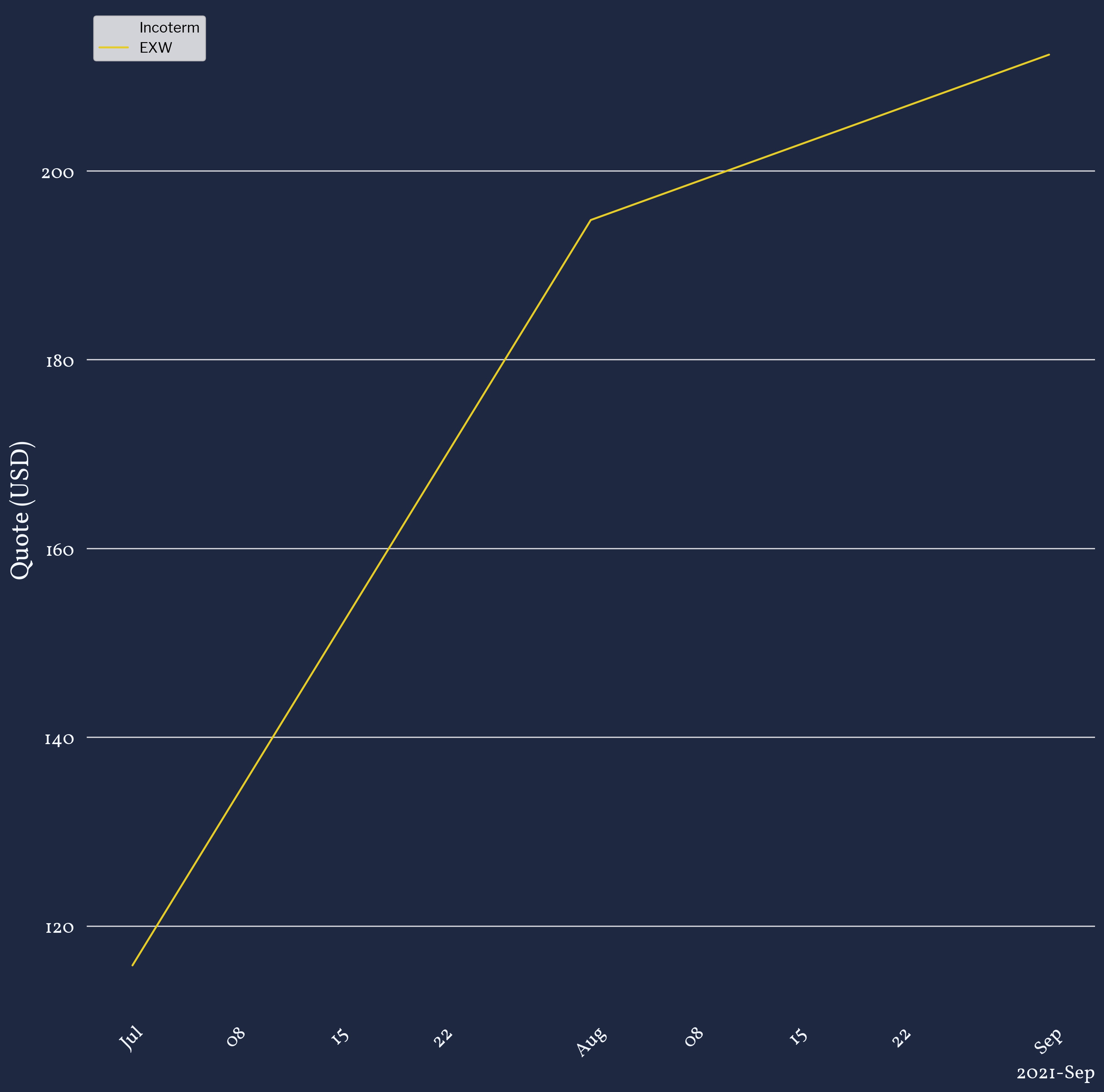 The two plots for FOB and EXW prices in Figure 3 show the evolution of forward prices for Brazil Corn. They reveal that both forward curves evolve in opposition to each other. This difference in trend is probably due to the nature of each incoterm. It seems that Corn FOB is more stable and sensitive to the seasonal rally, whereas Corn EXW looks more responsive to the bull market, even though the forward curve does not extend past Sep 2021.

Although La Nina hampered planting, the pressure from the bull market pushed the prices upward. Looking forward, FOB products cash prices are going down, with a better season expected in 2022, while EXW products are still rising under the bull market in the foreseeable future.

How Much Brazil Corn Has Shipped? And Where Is It Going?

As Brazil Corn cash prices increase with the Bull market, it is necessary to look at Brazil Corn shipments to understand their dynamics in the bull market and if it is possible to draw any direct relation between prices and shipments. 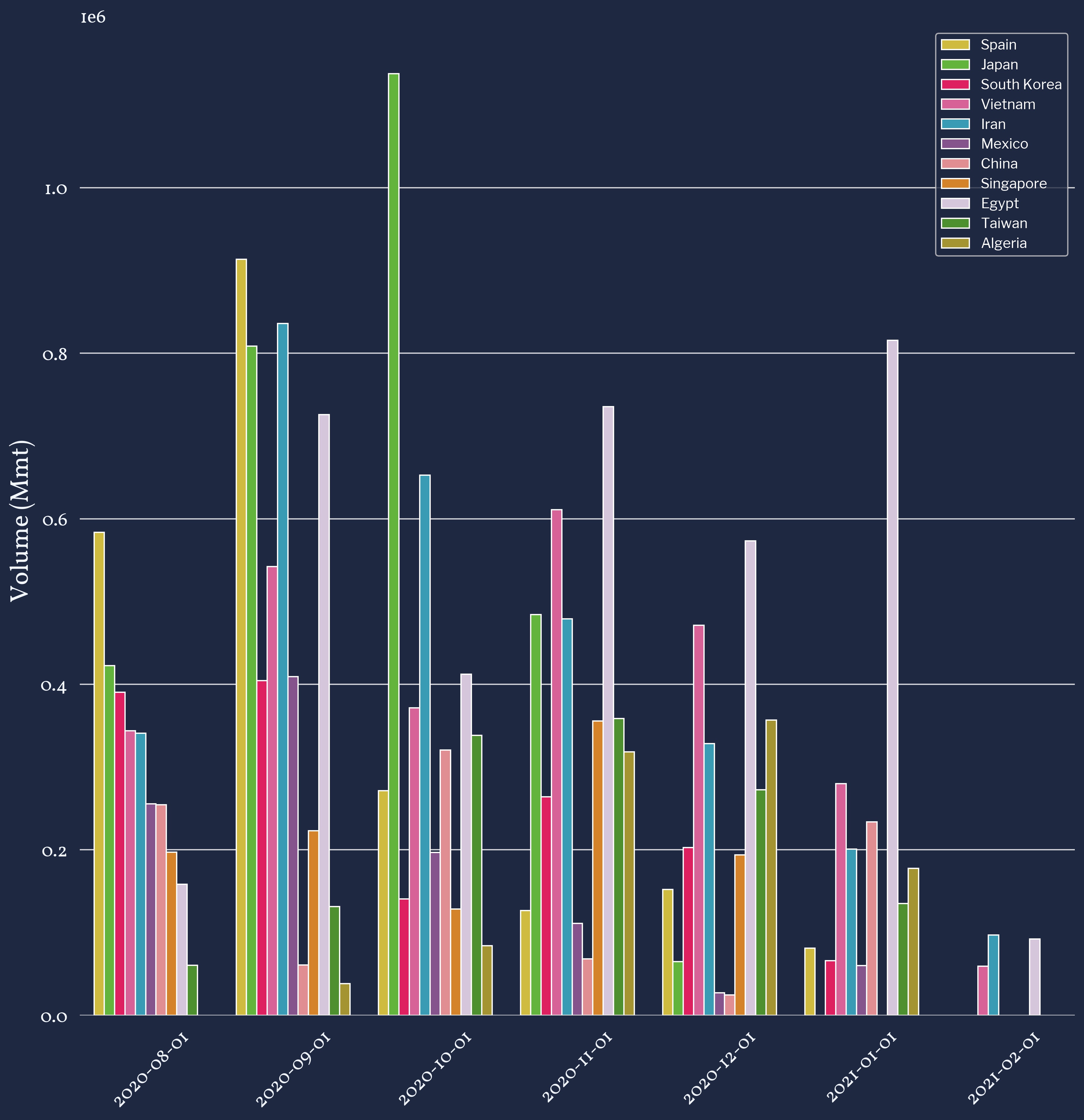 The bar chart in Figure 4 represents the total volume of shipments for each destination and month. As AgFlow tracks 46 import countries, only the 11 most important ones are shown.  Additionally, as Corn harvesting only started this month, the number of shipments for Feb 2021 crops is minimal.

However, shipments up until then show that some countries represent a considerably more significant share of the corn shipments, even among the top importers, and China is not among them. Thus,  Chinese imports must not be a driving factor for Brazil Corn cash prices.

Nonetheless, Japan or Algeria are countries that usually import agricultural commodities through Tender contracts. As shown in an AgFlow analysis, these imports are periodical, which means that perhaps China’s import shares could be more substantial with a more extended analysis period.

The shipment volumes also reveal similar spikes and overall increases that look similar to the Corn cash prices. In another AgFlow analysis looking at correlations between cash prices and trade flow volumes, this relationship was dismissed. In a bull market, however, dynamics change.

Therefore, is the bull market a driver to the correlation between Brazil Corn cash price variations and Brazil Corn shipments?

Is the Growing Demand for Corn Driving Up Brazil Corn Prices?

The Chinese market is the primary reason for the ongoing bull market. However, Chinese imports of Brazil Corn products are not as substantial as other countries, as shown in Figure 4. Nonetheless, it affects the global agricultural market and demand. In which case, establishing a direct relationship (in the form of a  mathematical correlation) could hint at how the bull market drives the entire Brazilian Corn market. 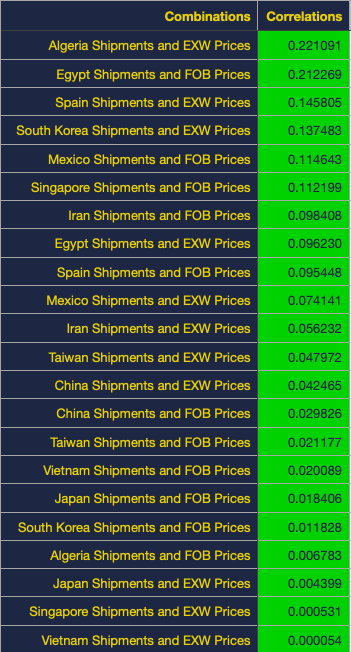 The table in Figure 5 is organized in descending order. The stronger correlations are at the beginning of the table and the weakest at the bottom.

This table reveals that the relationships between prices and shipment volumes are not strong and show no direct relationship. Moreover, there is little to no change in the correlation coefficients between FOB and EXW, indicating that the incoterm has close to no influence on the resulting coefficients.

In the end, the relationship between shipment volumes’ destination and price variations—with Incoterm—is not direct and cannot drive one another, thus reaffirming the conclusion of the article mentioned above.

The bull market does not drive the relationship between demand and price. Looking at more parameters (like supply and demand) can surely provide a better understanding and a stronger link between both.

Brazil Corn Market 2021 In A Nutshell

All in all, the Brazil Corn spot cash prices showed a steady increase for FOB prices in the last six months. Additionally, forward cash prices curves indicated that prices past the harvest season—and the rally behind Corn prices— are dropping for FOB products as yields should be more extensive in the coming seasons. On the other hand, EXW forward cash prices continue to rise in the foreseeable months. This increase, as a consequence of the bull market, is also resultant of  a rough season due to La Nina.

Shipment volumes further confirmed that the massive Chinese grain imports at the origin of the global bull market are only minimal for Brazil Corn, particularly when looking at other shipping destinations representing a greater portion of the total Corn export volumes.

Finally, Brazil Corn’s first crop of 2021 is highly priced due to a global hype around the bull market and a smaller yield as a result of the harsh conditions with La Nina. Moreover, while the Chinese imports are not the most important, this bull market condition will probably push shipments towards this destination.

In the coming months, it will be imperative to monitor shipment volumes to China, as well as tender contracts with other countries —like Japan, Algeria, South Korea, or Egypt— as the dispute for this limited stock will proactively change the pricing of Brazil Corn.

Read also: Do Not Base your Risk Management on Imcomplete Forward Curves