How Do USD and Emerging Markets Drive Commodity Prices?

The U.S. dollar plays a dominant role in global financial flows and commodity markets. This dominance is due to the reliance on global trade, debt financing, and its fungibility across all economies. Despite all the talk of China as a rising financial power, RMBs only account for less than 5% of global central banks’ reserves three years after gaining reserve currency status.

Let us look at a few figures illustrating the U.S. dollar prevalence:

While the dollar’s role in commodity markets and global trade is clear, the impact on specific commodities and developing economies is often misunderstood. The standard pricing tool for the dollar is the Dollar Index (DXY). The dollar index chart represented below is primarily comprised of European currencies (78%) and the Japanese Yen (13.6%). When traders or analysts quote a “dollar” price, this is almost always referencing the change in the dollar Index over a specific period. 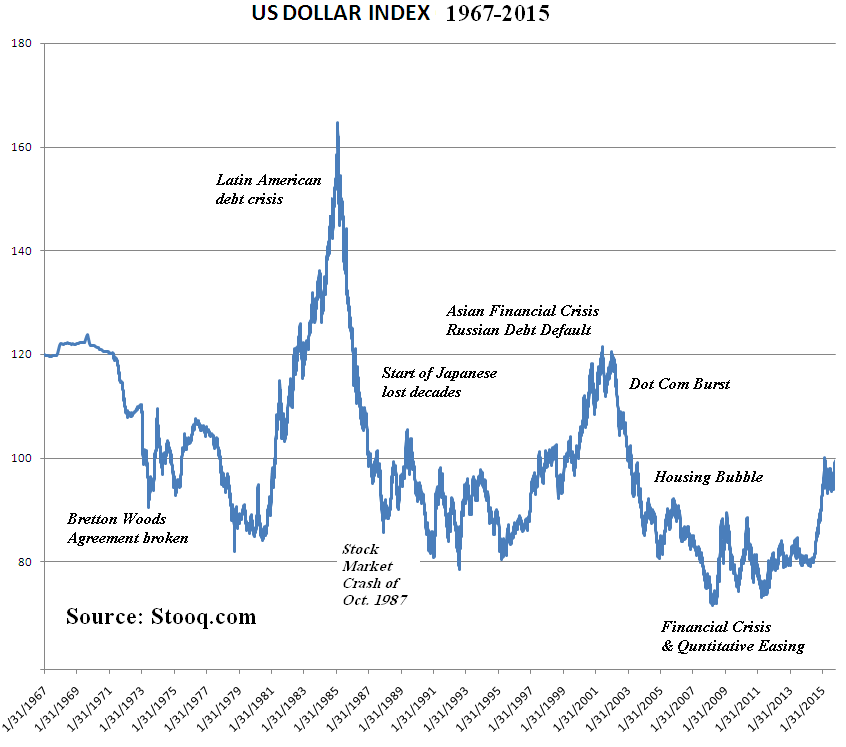 The reason the above chart is so misleading is that developed economies are not the drivers of commodity demand nor global growth. Aside from outliers such as the 2020 coronavirus black swan, it can be said that the United States will grow roughly 2% per year (give or take a couple of tenths of a percent on either side). To highlight what an outlier 2020 is proving to be – Goldman Sachs predicts the second quarter USA GDP at -39%. Developed economies are more immune to price shocks, and economic surprises will generally only increase or decrease overall growth to a small extent.

Developing economies are also much more dependent on commodity prices and favorable borrowing and exchange rates, with even small price shocks having substantial impacts on a given industry or economy. This leads to self-reinforcing feedback loops as foreign investors can be quick to shift from risk-taking to risk aversion and vice versa. When growth is positive, and investors desire more risk, developing economies benefit from a virtuous cycle of better growth leading to more investment. The opposite is also true with negative downturns, often leading to social unrest, currency crisis, or in extreme examples revolution.

The inherently fragile nature of emerging markets and their dependency on the U.S. dollar is often overlooked. Many professionals are only now becoming aware of the impact U.S. dollar strength as debt binges in recent years by foreign borrowers (sovereign and corporate) have become an increasing liability. The reasons for the massive increase are generally quite simple. Sovereign government’s ability to inflate away debt makes lenders wary of lending in one’s currency.

Second, after years of ultra-low interest rates, all borrowers could virtually access more and more financing, while kicking the can down the road on mounting debt loads. The debt crisis often becomes apparent with a sudden catalyst revealing the extent to which finances had previously eroded. The chart below shows emerging markets have taken on trillions of U.S. dollar debt over the last five years. 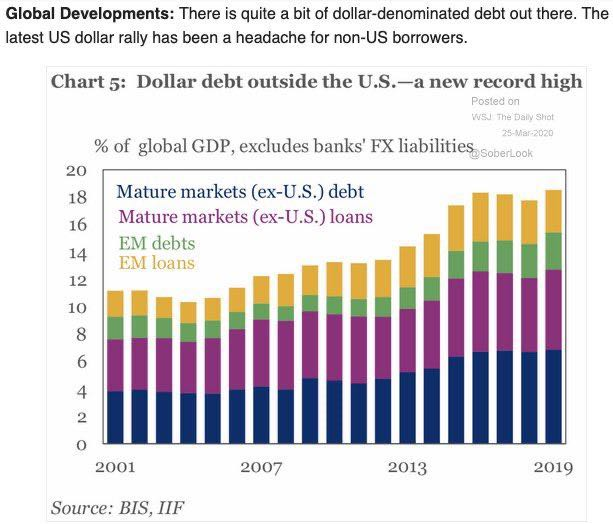 The chart below represents the monthly real trade-weighted dollar index from the Federal Reserve website. This weighting is updated annually based on global trade in U.S. dollars. It is essentially providing a much more accurate reflection of the dollar’s value based on actual transactions around the world. In this context, the dollar is now the strongest it has been since the mid-1980s against emerging markets and increasing almost daily. Whereas access to U.S. dollar financing was a competitive advantage only months ago, it has become a massive liability for a large number of developing economies.

Coronavirus is the Perfect Storm to Expose U.S. Dollar Dependency

As outlined above, negative feedback loops from lower growth forecasts and higher debt servicing costs can rise exponentially when countries have borrowed in U.S. dollars. The coronavirus has been the perfect storm to expose the compounding dollar liabilities as collapsing growth, and higher borrowing needs will force many emerging market economies into untenable positions. It is assumed that GDP forecasts across the globe, with most countries now expected to grow below -3% and China is now forecasting to grow close to 3%. Anything below 6% will force them to increase already massive debt loads, and this does not include the impact of fighting the coronavirus.

Argentina is close to default on its loan obligations. Brazil is on the verge of a currency crisis, and virtually all developing economies have seen growth and exchange rates slashed in recent months. Rising medical costs, ongoing countrywide shutdowns, and collapsing commodity prices will reinforce negative growth in the coming months making a “V” shaped recovery less and less likely. Argentina has become a case study of what can happen when the government’s ability to finance its deficits ends in default. The top chart below represents the official government exchange rate for the Argentina Peso and forward expectations from financial analysts. And as for the bottom chart below, it illustrates the “Blue dollar” rate or the exchange transacted in the private sector. The current Blue dollar rate is above 70% and has nearly reached 100% very recently, implying massive inflation or devaluation expectations going forward the government refuses to acknowledge. While analysts speak of deflation, many emerging markets are experiencing the opposite as local currency devaluations fuel rising domestic prices. 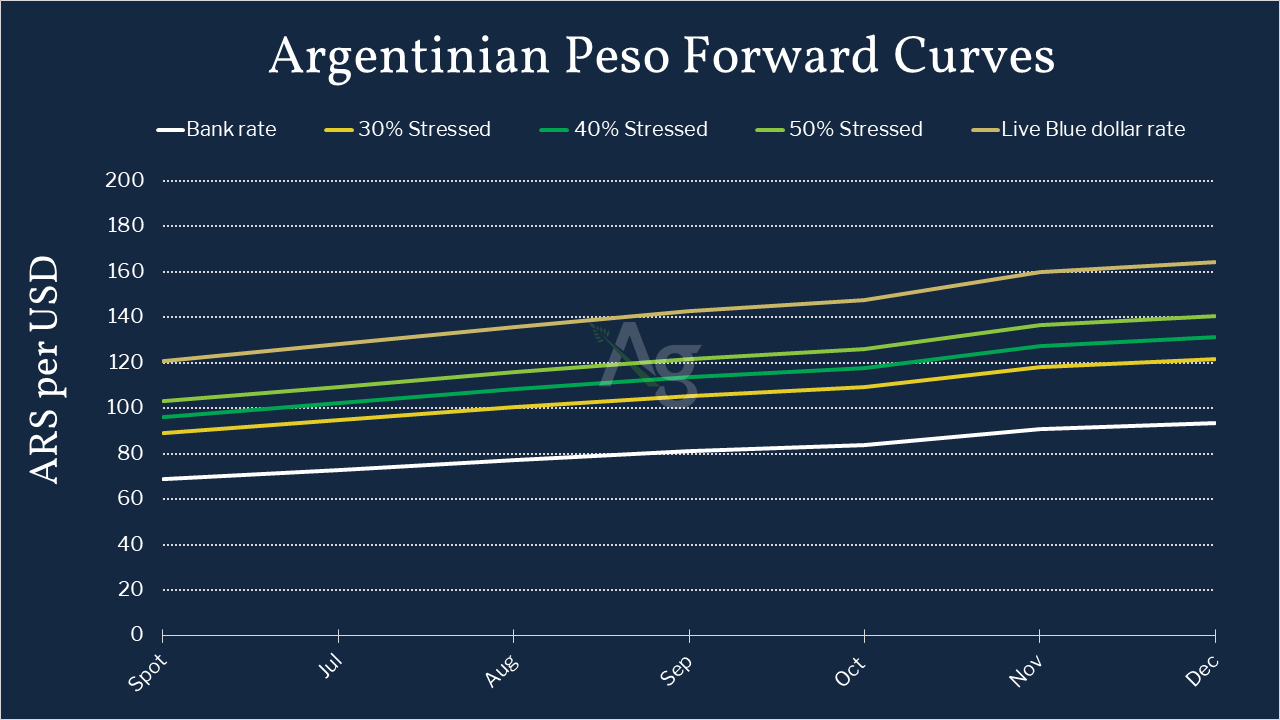 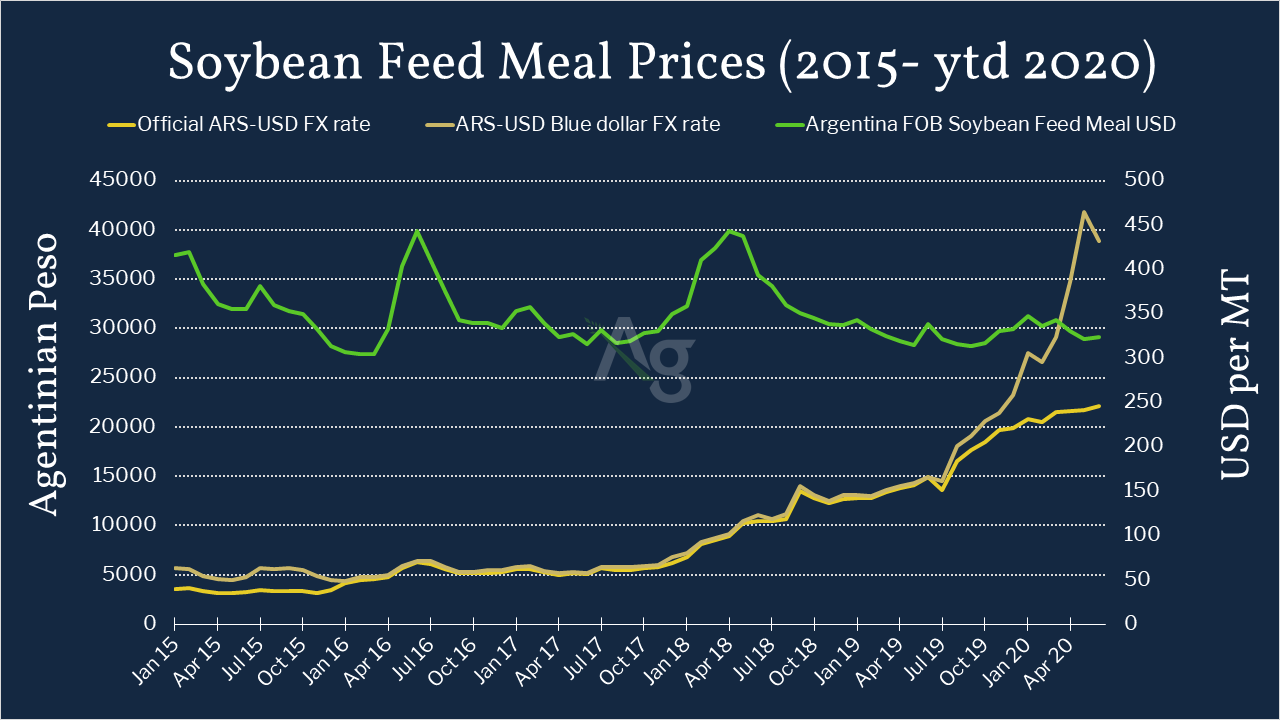 Weak currencies have several types of impact on local and global commodity markets:

Over the last several years, commodity production in emerging markets has increased to new records each growing cycle, with producers getting near or all-time high prices in local currency terms despite commodity markets underperforming virtually every other asset class since 2013. This has created a deflationary cycle in agricultural markets with technology and profitability, encouraging acreage expansion in most developing countries. Examples are wheat in former USSR countries, corn and soybeans in Brazil and Argentina, or cotton in India and Pakistan. Once the crop production is established, investment in storage, logistics, and export capacity soon follow. Brazil has been the quintessential example of this cycle over the last decade.

Brazilian export capacity is now over 15 MMT a month, with recent months setting new records consecutively. Over the current quarter, Brazil will ship just over 30 MMT soybeans to China with over 14 MMT in a single month. New roads from the interior and barge river loading facilities have facilitated the type of movement many thought impossible only a few years ago. There was an old joke around the Brazilian growth story: “Brazil is the country of the future and always will be!” Brazil has arrived as the dominant global soybean exporter, dethroning the United States.

In May, the WASDE report showed a forecast for next year’s Brazilian soybean crop at 131 MMT, which is nearly 40% more than the United States for the same crop year. Less than five years ago, the United States was the largest producer in the world. The chart below shows that farmers are now receiving nearly BRL 50 per bushel versus USD 8.40 cents per bushel in the USA. 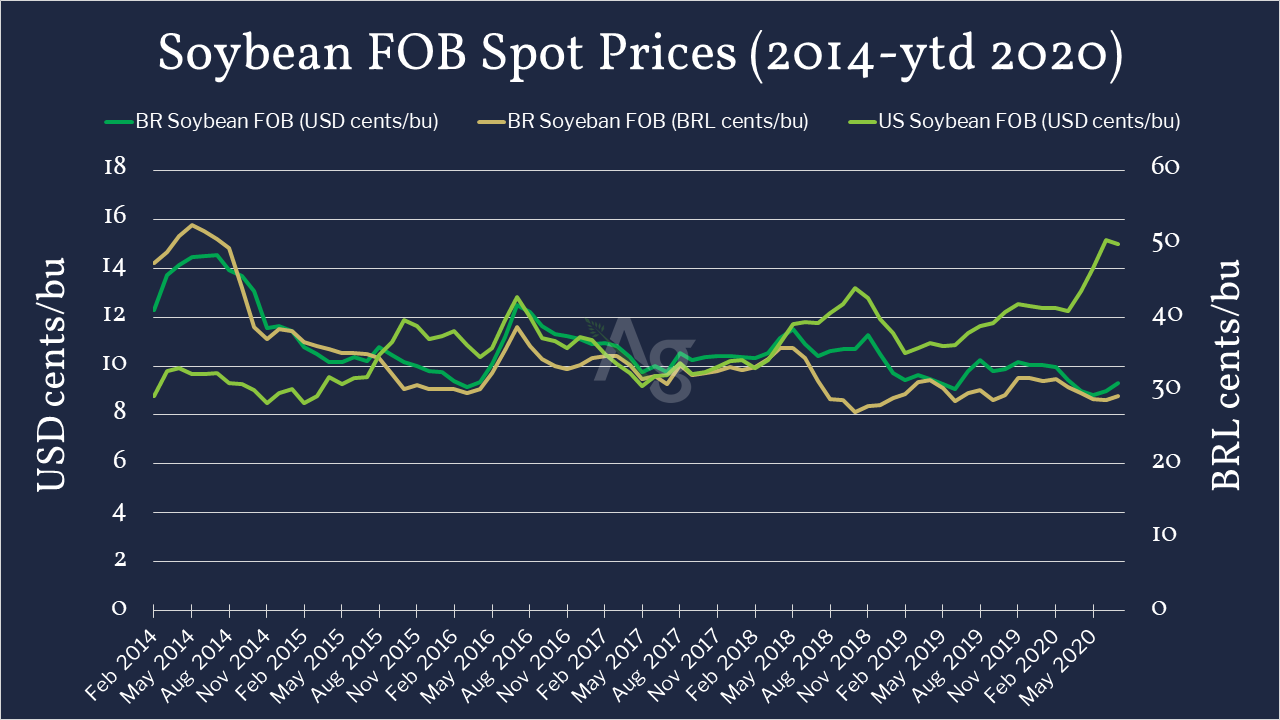 This is the same across several commodities grown in Brazil: corn, soybeans, sugar, cotton, and coffee. It is estimated for soybeans alone, Brazilian farmers have sold roughly 35-40% of the 2020/21 crop, and even small amounts of 2021/22. This is no different for wheat hedging in European or Black Sea countries, palm in Malaysia, or cotton in India. Currency weakness encourages production and hedging, but this does not work both ways. Conversely, commodity prices often have minimal impact on monetary or fiscal policy. There are occasions when major commodity price shifts, such as crude oil, can impact the financial health of a vast exporting country such as Russia or Venezuela, but not often in the agricultural markets.

Turning to Brazil’s southern neighbor, Argentina now sits on the brink of the ninth default in modern times, and likely not the last. Despite this, producers have done exceptionally well – sowing record acreage, exporting near-record crops, and processing at steady rates. How much longer will this continue before farmers once again begin hoarding crops and commercials demand significantly more risk premium for offering forward sales?

Traders and corporations are rarely well-positioned to manage risks associated with significant dollar strength in the emerging markets. The coronavirus has exposed a level of vulnerability, most thought impossible 3-6 months ago. The negative feedback loop has picked up steam and is likely to worsen in the coming months. This could continue to have a very negative impact on both cash and futures in the agricultural markets. Conversely, a change in the U.S. dollar trend relative to emerging market currencies may be the first sign the worst is behind the industry.