A Collision of Price Drivers

As the world economy increasingly looks less likely to achieve the so-called V-shaped recovery that most analysts anticipated in January and February – the broad debate on the impact of the virus that quietly began in Wuhan, China before quickly spreading around the world has now centered on an alphabet soup of possible economic outcomes. Will it be a V, U, W, L, or a tick-shape curve? 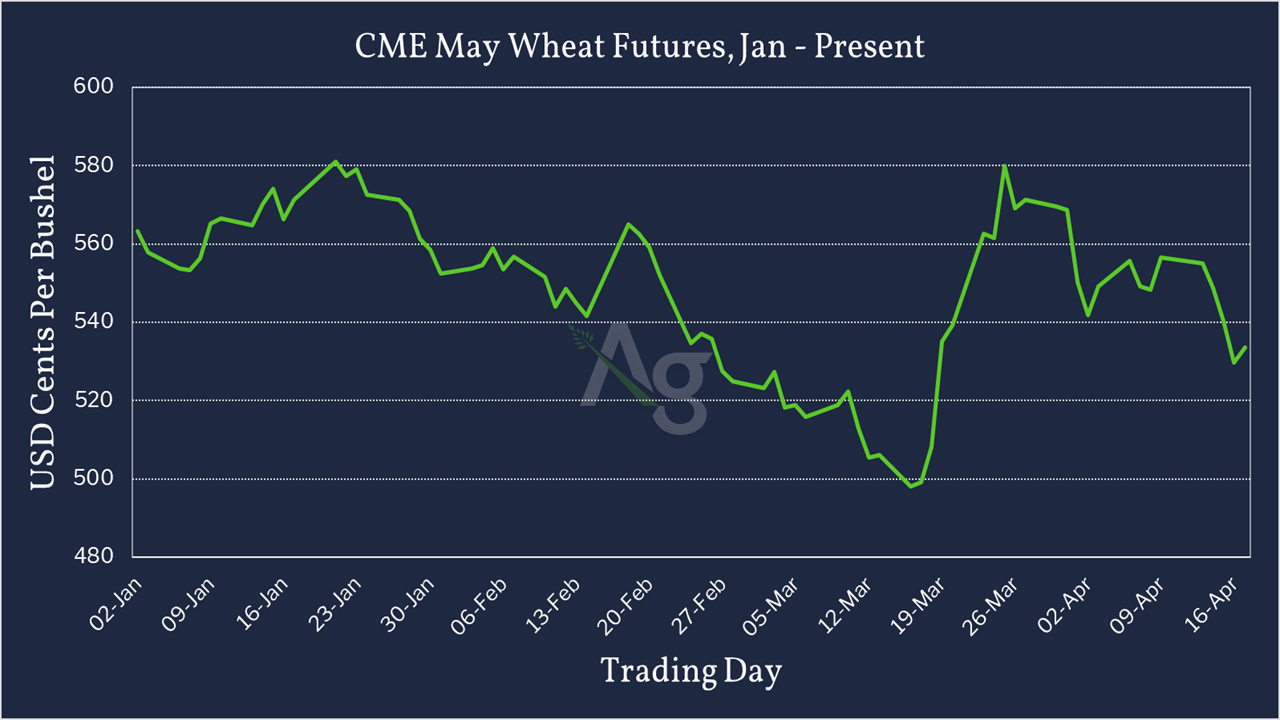 While Euronext’s milling wheat contract – the benchmark future for European pricing – has achieved and maintains a V-shaped recovery. 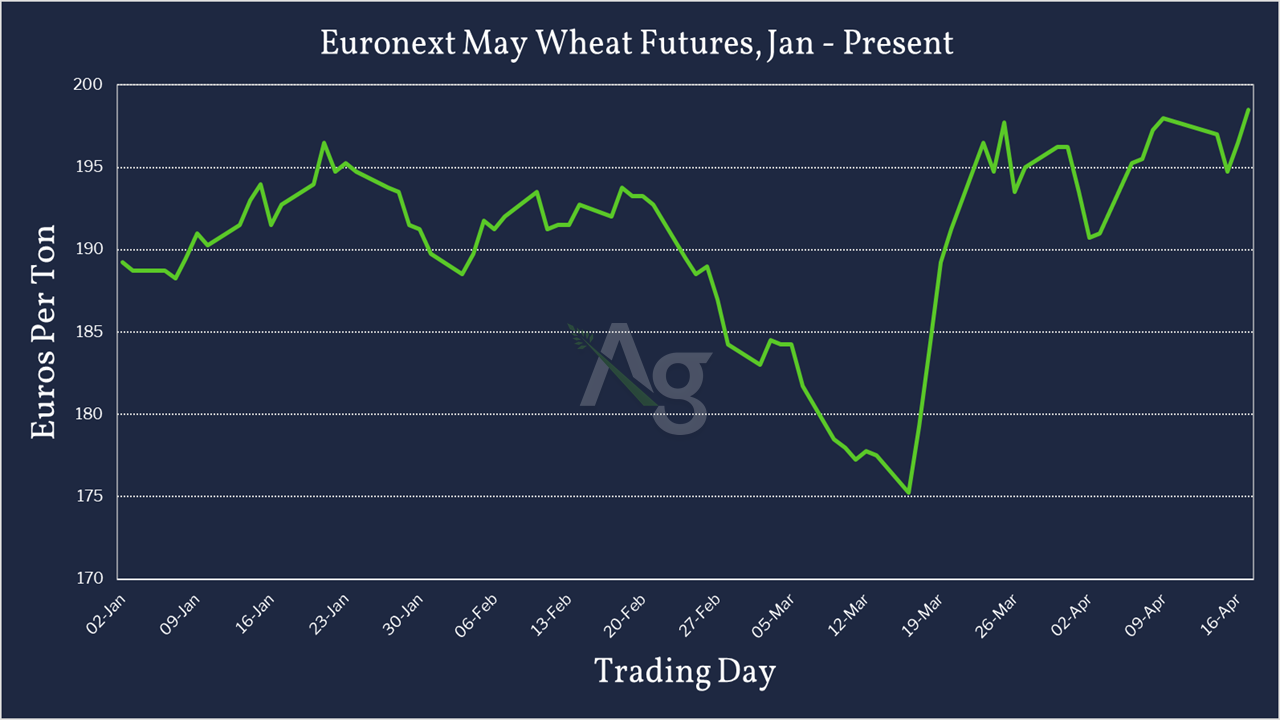 As Coronavirus first emerged, its first and obvious impact was a universal weakness in most commodities on expectations of dramatically slower global economic growth and subsequently reduced demand.

For most commodities, significant demand reductions have maintained steadily lower prices. For instance, crude oil traded at 20-year lows in recent days, despite agreements between OPEC and other producers to cut world oil supply by roughly 10%. Physical oil in the United States even briefly achieved the historical and previously unimaginable feat of trading below zero USD per barrel.

In the agriculture space, soybeans have returned to testing long time lows, after a brief rally on fears supply chain disruptions induced by Coronavirus mainly relating to exports from Brazil and Argentina to China. Corn, on the other hand, as a significant ethanol input in addition to being food input – is plumbing lows not seen since 2016.  Yet wheat, alone among all major industrial commodities, has shown renewed resilience and price volatility.

The Unique Nature of Wheat

Wheat is different from other major industrial grains and oilseeds commodities in many regards.

First, wheat is perhaps the most political commodity in the world, aside, possibly, from oil. Wheat is the main ingredient in one of the world’s most essential and fundamentally critical foods – bread and its many derivatives.

More than one-third of the global population depends on wheat as a staple of its diet. When milled into flour, wheat products account for nearly 20% of calories and protein consumed by humans, more than any other single food source.

Far more than corn and soybeans – primarily used for animal production – wheat is a fundamental and critical component of food and even national security in many countries. An increase in meat prices is a significant inconvenience, but meat prices do not cause fundamental political unrest, unlike wheat.

In 2007-2008 and 2010 wheat production challenges led to food security challenges resulting in political turmoil and widespread riots around the world.

While wheat crises in 2007-2008 and 2010 are widely known, a lack of appreciation for the power of wheat significantly contributed to the ultimate ouster of Egypt’s Mohamed Mursi in 2013 (Reuters, July 25, 2013: Egypt’s wheat problem: how Mursi jeopardized the bread supply)

Second, while the United States is the world’s largest producer and exporter of corn and soybeans, with Brazil acting as a second key exporter, wheat production comes from all corners of the earth. Wheat, as a grass with high nutritional content, is found in a wide variety of climates. Few, if any, other commodities have such a widespread production and export footprint coupled with such a diverse importing geography. 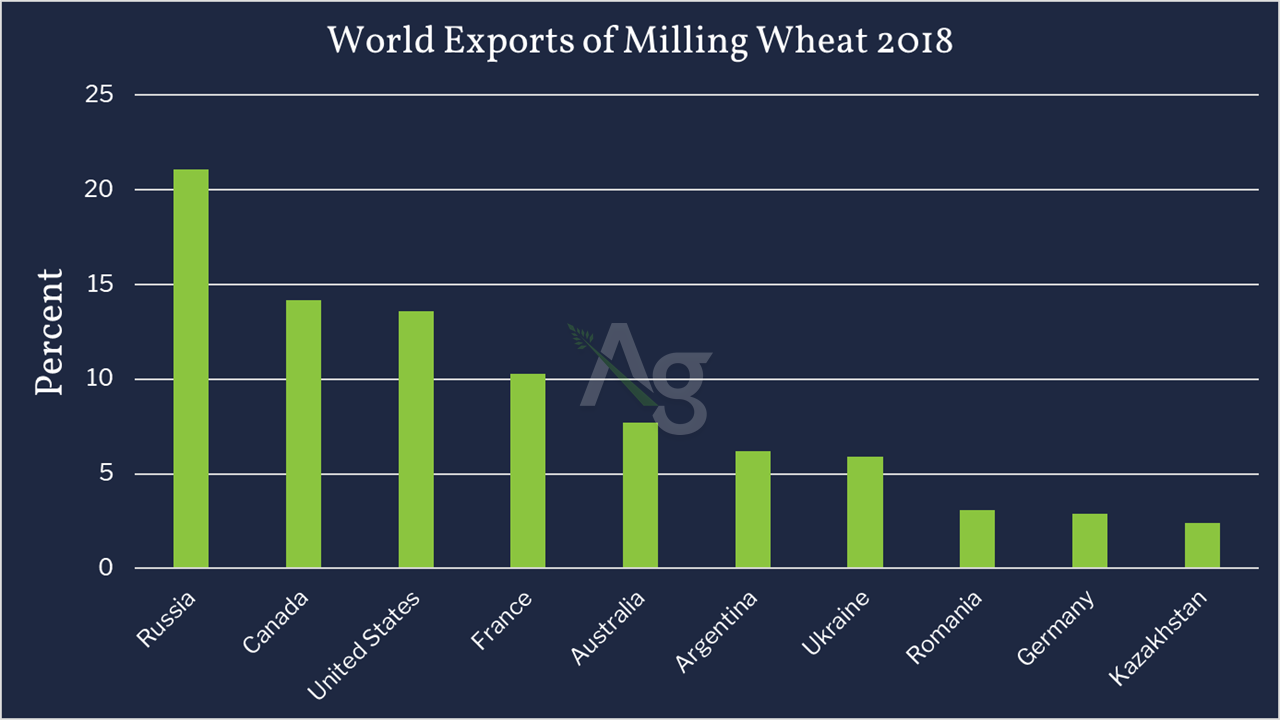 Third, though wheat is grown around the world and in both hemispheres, the northern hemisphere’s spring months of March, April and May coincides with the critical planting and growing phases of several of the world’s most important wheat producers and exporters – Russia, the European Union, the United States, Canada, and Ukraine.

While wheat’s wide production footprint acts as diversification for global food supply, buffering the crop against particular weather risks that might arise in any single country or region, its wide footprint also exposes wheat prices to more weather uncertainty than any other grain or oilseed commodity product. 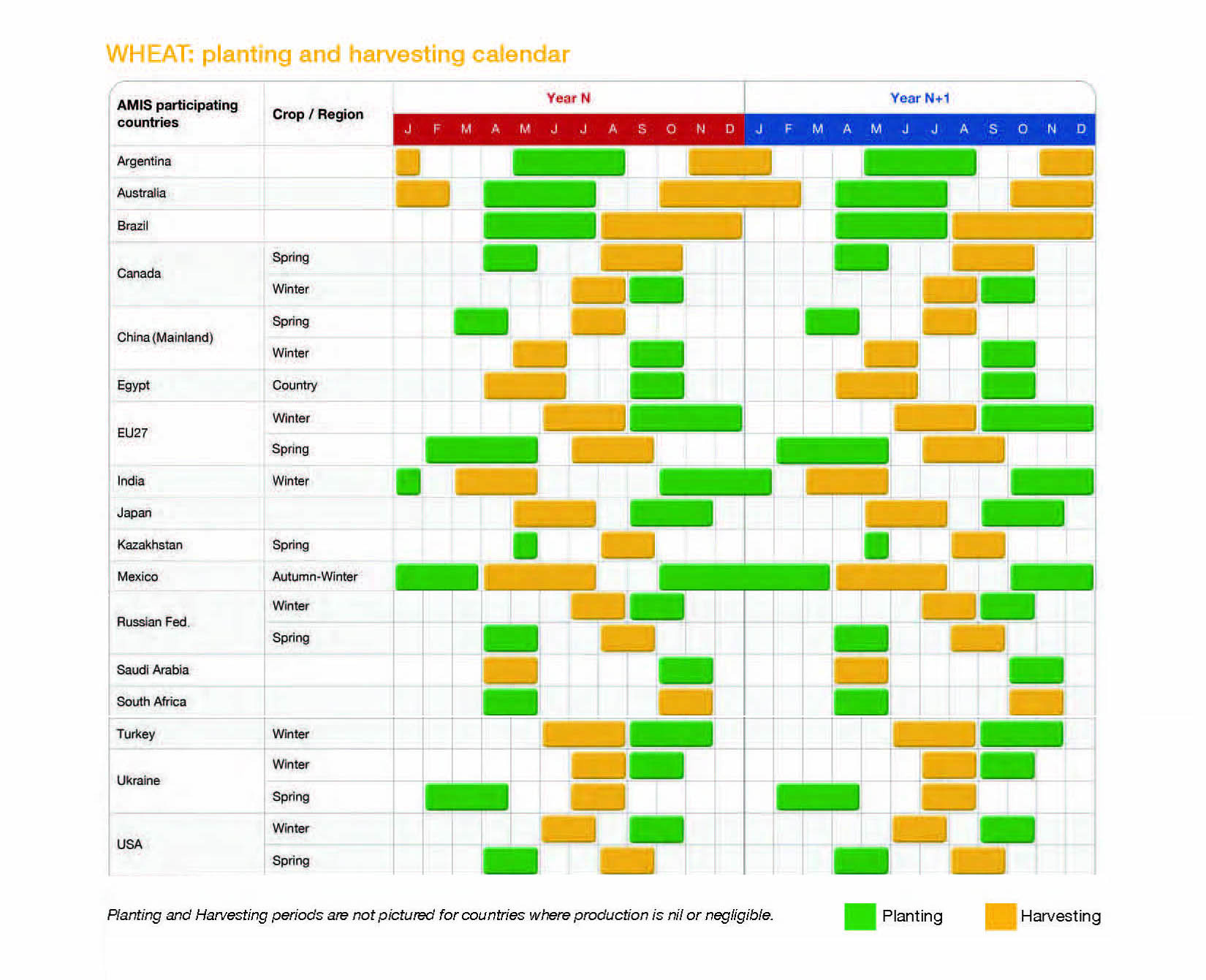 Corn and soybeans production, which is prominent in the United States, Brazil, and Argentina, faces acute price spikes when adverse weather impacts these growing regions during critical periods of the planting, growing, or harvesting period. However, given the relatively regionalized production base of these commodities, and assuming weather events to occur relatively randomly across geographic locations, the frequency of a weather event is low.

Put simply, wheat’s vast production geography provides a diversification of global supply and protection from a single major weather event. Still, the same wide production footprint, and a shared period of planting among key exporters, significantly increases the likelihood that in any particular year one or more growing region faces some form of weather event that induces broader price volatility, generally in the form of price spikes.

As a result, wheat has a historical tendency to experience sharp moves higher, often followed with a similar move lower, throughout March, April, and May.

In four of the past five years, for example, the CME’s July futures contract has experienced price spikes of more than 10% at least once and often several times during the March to May global planting and growing season. 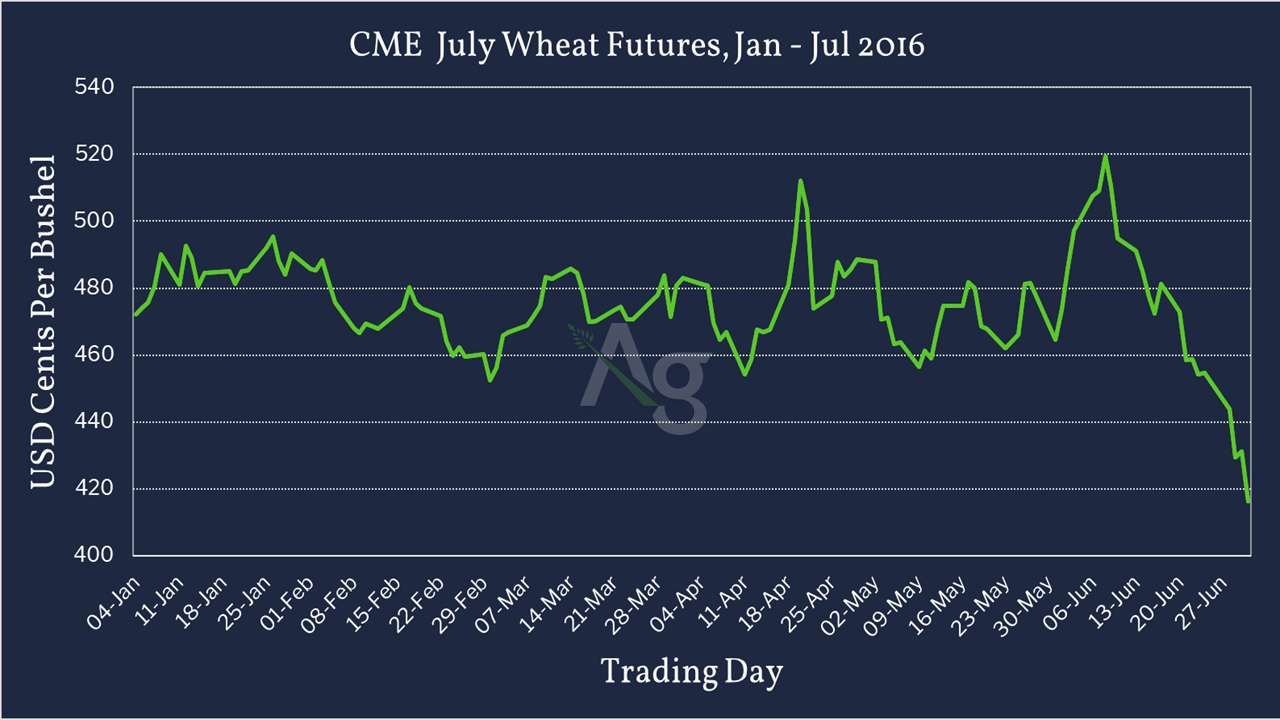 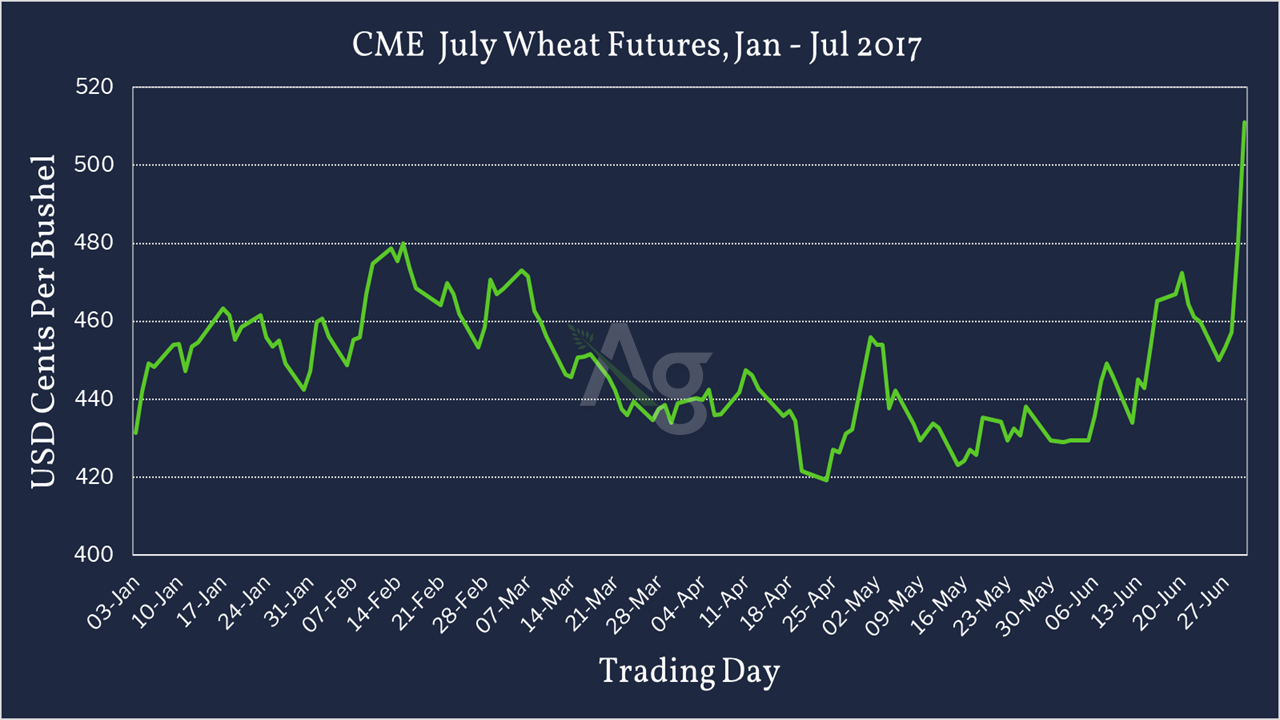 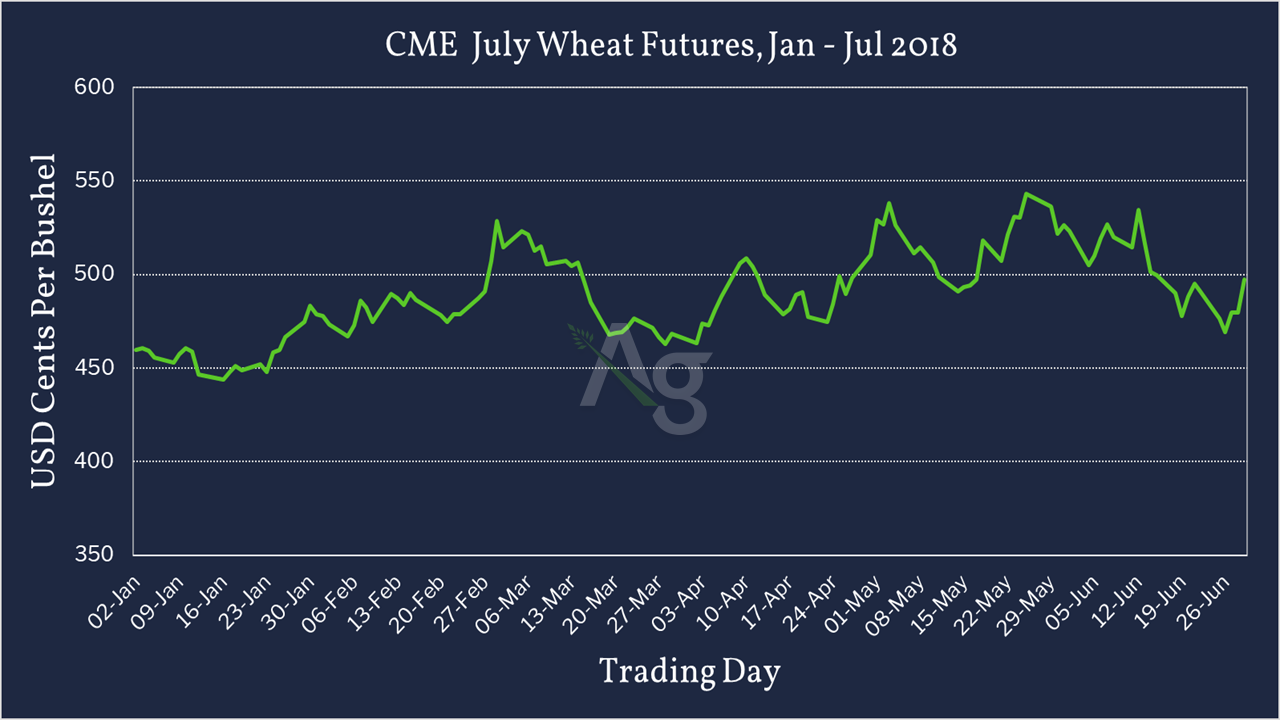 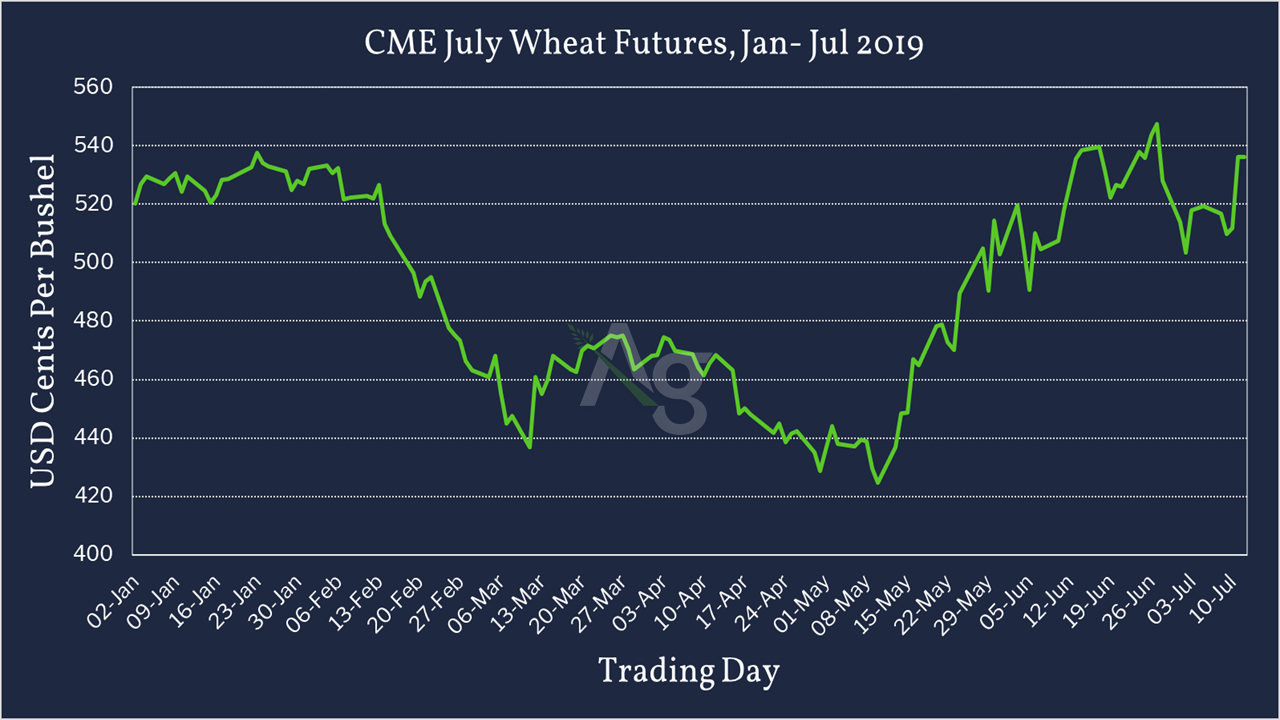 The Coronavirus outbreak of 2020 is bringing all of wheat’s particular nature to the fore. Wheat’s position as a political commodity and a key component of essential diets have quickly reached headlines as many key wheat importers look to ensure supplies amid the Coronavirus pandemic, and several exporting nations have, in one form or another, imposed or considered export restrictions to reduce risk of internal food inflation. Meanwhile, wheat has entered its planting and growing season in many countries, a period prone to price volatility and weather uncertainty, as Coronavirus continues to spread and threatens to close or slow exports from key exporting countries.

The Russian Agriculture Ministry proposed to limit the exportation of some grains, including wheat, to 7 million tons for April-June. On April 17, after weeks of speculation about whether a proposal of early April would be imposed, the deputy agriculture minister Oksana Lut announced the country would suspend grain exports until July 1, once its export quota is exhausted.

Russia’s official export data shows that as of April 17 (Official Russian export data) the country had exported roughly 1 million tonnes of wheat per week in the first three weeks of April, providing just over 4 million tonnes available for export. If the pace remains, wheat export limits from Russia will be reached by mid-May, triggering a full export ban until July.

Romania, the EU’s second-largest wheat exporter and a key Black Sea exporter, placed a ban on exports outside the EU in early April before unceremoniously removing the ban in mid-April.

Meanwhile, Ukraine, also a leading global milling wheat exporter, announced in mid-April that the country is ready to ban wheat exports if sales exceed limits agreed with traders. However, wheat export supply from Ukraine has mostly been completed from the current crop year, and the statement is moot.

On the other side of the trade ledger, key importing countries such as Egypt are looking to boost stocks as a preemptive measure after President Abdel Fattah al-Sisi encouraged authorities to build the country’s reserves of strategic commodities amidst rising global fears for food supplies. Several other nations have also looked to proactively procure wheat imports as Coronavirus’ spread threatens supply chains and encourages consumer stockpiling of essential foods.

As a crucial exporter to many key wheat importers, it is notable that France experienced a brisk wheat export pace throughout 2020. On April 15, FranceAgriMer raised its projection of French soft wheat exports outside the EU in the 2019/20 season, which ends June 30, to 13.2 million tonnes from 12.7 million estimated in March. In March, French soft wheat exports to destinations outside the EU reached 1.63 million tonnes, the highest March volume in figures going back to the 2009/10 season.

Throughout the winter and spring of 2020, dry weather has persisted in Russia’s southern regions, the country’s central area for wheat production and exports. This weather has led agriculture forecasters to downgrade Russian 2020 spring wheat production.  Still, Russian production is expected to be higher than in 2019.

France is also experiencing weather-related crop risk, with persistent dryness extending from winter into spring. FranceAgriMer reports that as of April 13, 61% of the French spring wheat crop is in good or very good condition, a percentage point lower than the previous week and the lowest rating in nine years.

In a joint statement March 31, the director generals of the U.N. Food and Agriculture Organization (UN FAO), the World Health Organization (WHO) and the World Trade Organization (WTO), jointly released a statement warning that uncertainty about food availability could spark a wave of export restrictions, creating, in turn, a shortage of supplies on the global market. Undoubtedly, global policymakers have learned the lessons of history.

Russia last entirely banned wheat exports in 2010 when a drought hit its harvest, rocking global markets. This move, which occurred roughly five months before the Arab Spring, led to widespread food inflation across the Middle East and North Africa and almost certainly played a crucial role in political uprisings that unfolded in January of 2011 and toppled regimes across the region.

However, export restrictions, quotas, or outright bans have always occurred during periods of significant crop failures.

In other words, in markets of generally significant supply-side disruptions where export restrictions fueled, rather than caused supply problems.

A demand-side impetus for export restrictions in an otherwise well-supplied market that is broadly witnessing demand reductions is unprecedented, and its outcome could very well not imply the dire warnings of long term food inflation or food insecurity.

Undoubtedly, export restrictions will, and are, producing additional supply chain hurdles, uncertainty, and volatility. However – extended and consequential food price inflation, or extended price rallies – are the product of supply and demand mismatches. And the long term supply and demand story will,  to no small extent, rest on production that is currently being planted or is growing across the northern hemisphere.

Another Spring Wheat Market with Added Uncertainty due to Coronavirus

The story of the 2020 wheat season might best be summarized as an unfolding weather market coupled with considerable demand uncertainty and a heavy dose of political intervention.

To quantify the magnitude of underlying trade activity, as a proxy for realized demand, it is helpful to consider AgFlow trade data.

According to data collected from AgFlow’s network of contributors, the number of concluded contracts for French and Russian milling wheat so far in 2020 is in line with a similarly slow market in 2019, but markedly behind the volume of completed contracts during the same period of 2017 and 2018.

Whether futures markets or the market for physical wheat, low traded volumes are rarely associated with committed and fundamentally driven bull markets. Instead, low volume is generally linked to highly uncertain conditions, or weak markets. 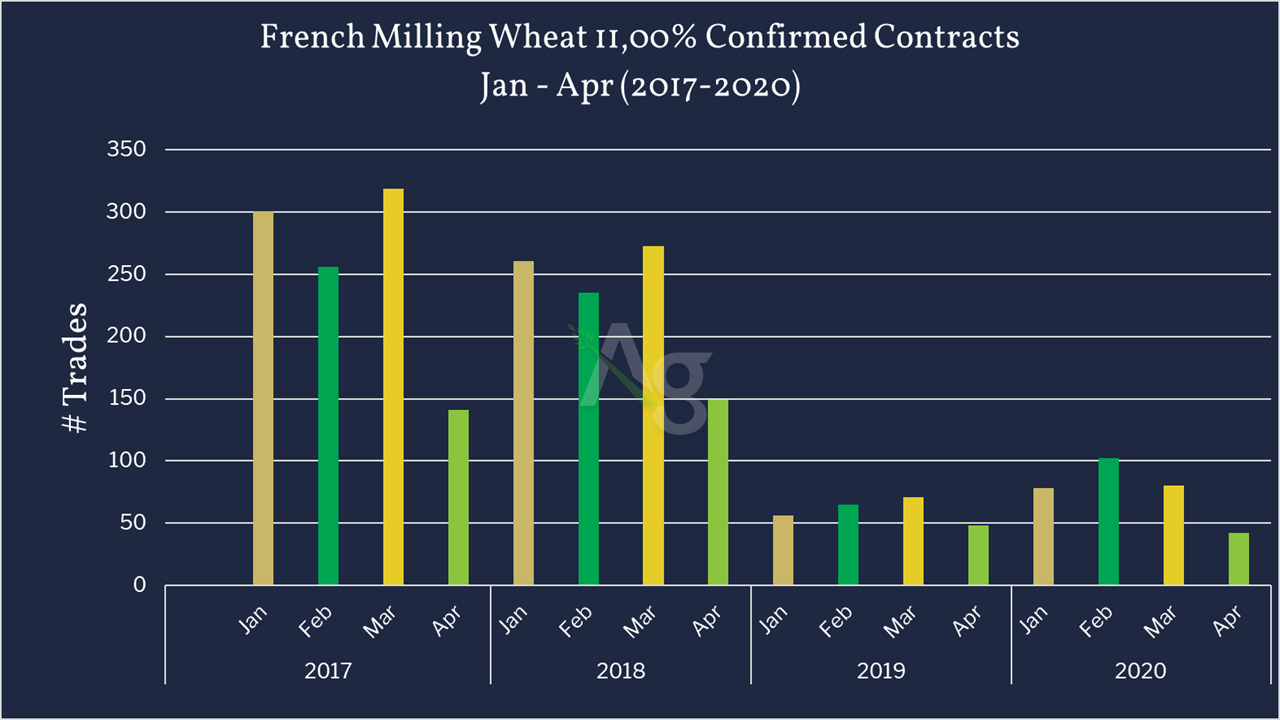 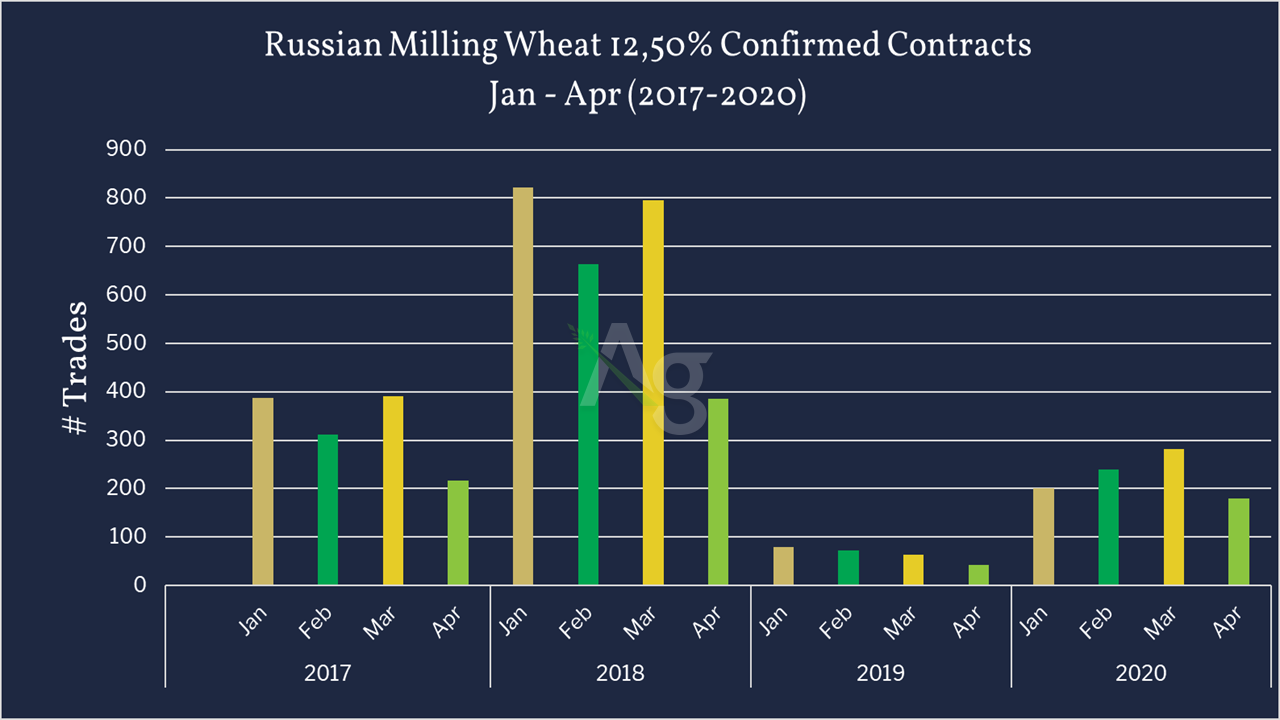 Quite simply, the Mediterranean and Black Sea wheat market is showing more signs of uncertainty, caution, and possibly confusion, than of an outright bullish mindset. Likely, volatility is the main story of spring wheat; thus, in the near future – call it a perhaps developing weather story in an overlay of global pandemic induced demand uncertainty and interference.

Finally – as the 2019/2020 export season comes to a close, considerations of old-crop export interference, and the logistical challenges they impose, will generally cede as weather and new crop production matters become increasingly paramount and are balanced against the unfolding impact of Coronavirus on wheat demand and its supply chain and the global economy more broadly.