The Impact Covid-19 Soybean Prices a Comparision with SARS

The coronavirus that is currently spreading across China and around the world has financial markets rattled for essential reasons – in China, as of February 3, more people have died from the coronavirus than from severe acute respiratory syndrome (SARS).

Monday, February 3, was, at least officially, China’s first day back at work after the Lunar New Year holiday, usually a week-long but which was already extended for three. Almost all of the country save Xinjiang is still on mandatory holiday until, for now, February 9. Even in municipalities that are nominally back at work, such as Beijing, the streets and subways remain eerily empty according to reports.

Having the world’s second-largest economy, and its economic driver in many regards over the past decade, on a forced weeks-long sabbatical with factories, farms, and other businesses shut is by all regards detrimental to the world economy.

And the market reacted in fashion on Monday with Chinese stock markets immediately opening down 10 percent, the daily limit, in many markets and the Shanghai Composite ending the day down approximately 8 percent.

However, experience with virus outbreaks in the past – most notably the SARS virus that spread globally from September 2002 to July 2003 – suggests that markets generally recover quickly and are not disrupted for extended periods surrounding epidemic or pandemic events.

Covid-19 in comparison to SARS & MERS

The Chinese economy is still reeling from the African swine flu that has, as a still-present challenge, wiped out half of China’s hog herd and driven pork prices sharply higher over the past year. However, the African swine flu is unique in its catastrophic impact on hog populations but does not impact human health. While critical for agriculture and related markets, it is distinct from a human contagion.

In terms of human epidemics or pandemics, the world economy has faced four significant global events in recent history – SARS in 2002, H1N1 more commonly known as swine flu in 2009, MERS 2012, Avian flu in 2013.

Of these outbreaks SARS and MERS, along with the current Wuhan coronavirus, are varieties of coronavirus.

The Wuhan coronavirus stands out by comparison in two regards – the disease appears to have a relatively low fatality rate, currently at just over 2 percent but appears to carry a significantly higher transmissibility rate.

By comparison, SARS ultimately was evaluated to have a transmissibility level of 0.4, and MERS still lower. The current Wuhan coronavirus strain appears, for the moment, to carry an infectious rate between 1.4 and 3.8.

In short – the current Wuhan coronavirus is relatively non-fatal but remarkably contagious, a factor that must be considered when considering the economic impact. A highly infectious pandemic risks prolonged impact on economic activity as governments take measures to prevent its spread with reduced global activity.

Economic analysts reviewing the likely outcomes of the current Wuhan coronavirus have broadly agreed on a number of points.

First, the full economic impact on China, and the world, hinges on the ability of the Chinese government to contain the virus and on the policy tools the government employs in reaction to the virus. Thus far, Chinese officials have acted aggressively to prevent further contagion, including a historically unprecedented quarantine of 100 million people.

Second, China’s heavily indebted private sector is a key challenge to watch as any prolonged shut down of activity – and increased operating costs – could be a watershed event that pushes widespread default.

In response to this concern, China’s leaders outlined plans on 2 February to inject fresh credit into the economy, including a net 22 billion USD to shore up money markets as well as looser borrowing terms for Chinese companies.

Third, in comparison to 2002-2003 when SARS erupted, China is a far bigger economy today with significantly larger economic importance, and the world economy is far more globally intertwined today than in 2002-2003. Thus, the economic impact of the Wuhan coronavirus will be greater than that of SARS.

Fourth, global economic growth is in a deceleration phase and as a result, the knock-on effects of extended disruption to travel, trade, and commerce generally could have a particularly acute impact.

According to conservative estimates published by Oxford Economics and reported in the New York Times, China’s economic growth is expected to fall to 5.6 percent this year, down from 6.1 percent last year. Notably, this estimate is based on economic impact thus far and possibly underestimate the final impact – SARS, for example, is generally stated to have had a 1 percentage point impact on Chinese GDP in 2003, twice the current Oxford Economics estimate of the Wuhan Coronavirus, which still has likely not reached its peak impact.

A reduction of Chinese growth to 5.6 percent, according to Oxford Economics, would slow global economic growth for the year by 0.2 percent, to an annual rate of 2.3 percent — the slowest pace since the global financial crisis a decade ago.

Fifth, recent trade disputes between the United States and China have significantly challenged the Chinese economy and the outbreak of SARS adds to the burden of China’s pledge to buy 200 billion USD of US imports over the next two years. However, despite this challenge, Phase One of the agreement explicitly outlines exemptions for natural disaster and certainly, the Wuhan coronavirus is a natural disaster under the agreement and thus should not put the deal in jeopardy.

In fact, there is a justifiable argument that in relation to the agriculture imports, namely soybeans, that will inherently be part of the 200 billion USD in imports, the Wuhan coronavirus could increase the urgency of imports as Chinese officials seek to avoid pressures on civil society.

On 16 November 2002, an outbreak of SARS began in China’s Guangdong province, which borders Hong Kong. The Chinese government, however, only notified the World Health Organization (WHO) about this outbreak on 10 February 2003, reporting 305 cases including 105 health-care workers and five deaths at that point.

SARS then persisted throughout 2003, with a peak in infections in March and April and the WHO declaring the world nearly SARS free by mid-June.

The impact of SARS on commodities prices broadly, as reflected by the Bloomberg commodities index, was an initially sharp decline throughout March, which then consolidated at the peak of the crisis, recovering to near pre-SARS announcement levels by June and before the WHO declaration. After the crisis had passed, the Bloomberg Commodity Index witnessed a sharp price rise throughout the rest of 2003, even as SARS remained on the global agenda. 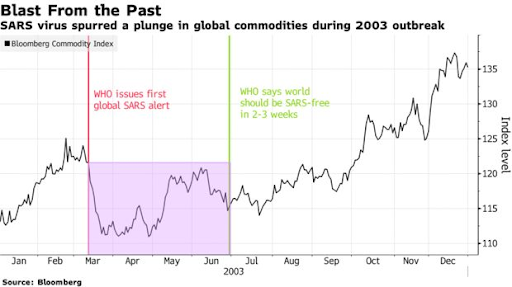 SARS impact on agriculture futures, meanwhile, was entirely negligible. In fact, soybean and corn futures rose throughout the pandemic. 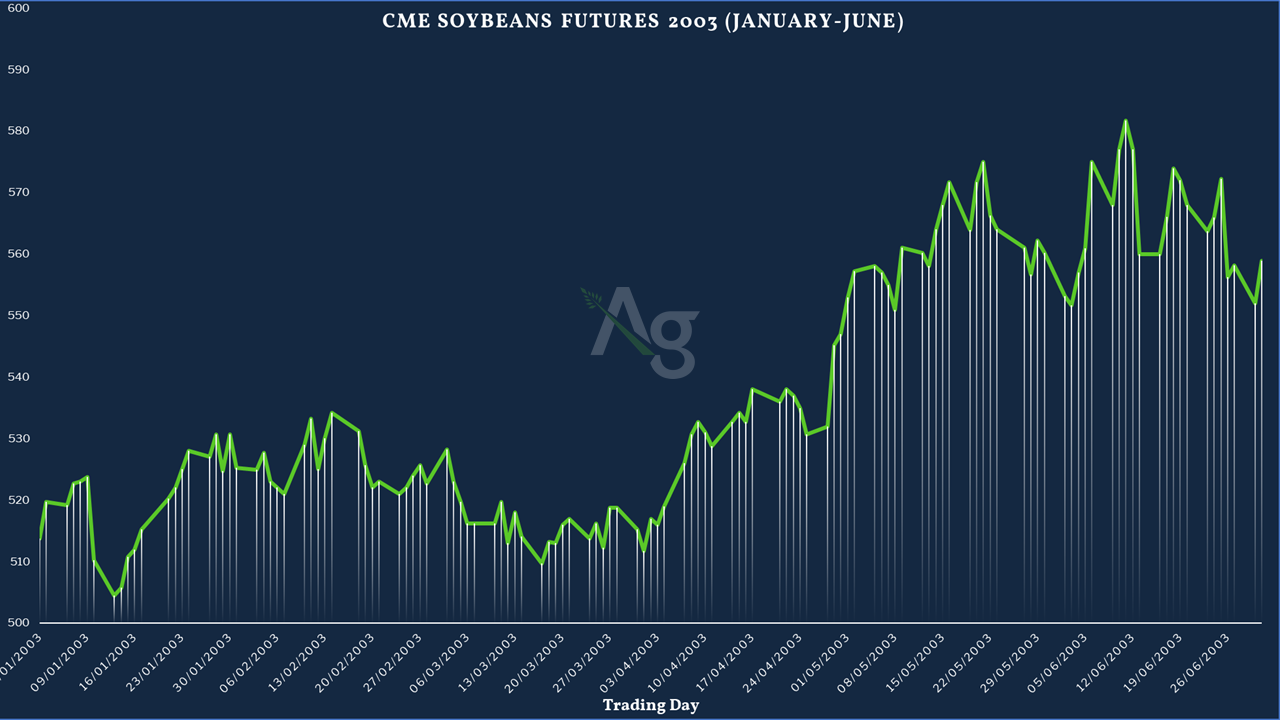 However, it is critical to note that in 2002-2003 China’s role in global agriculture imports was sharply lower than it is today. 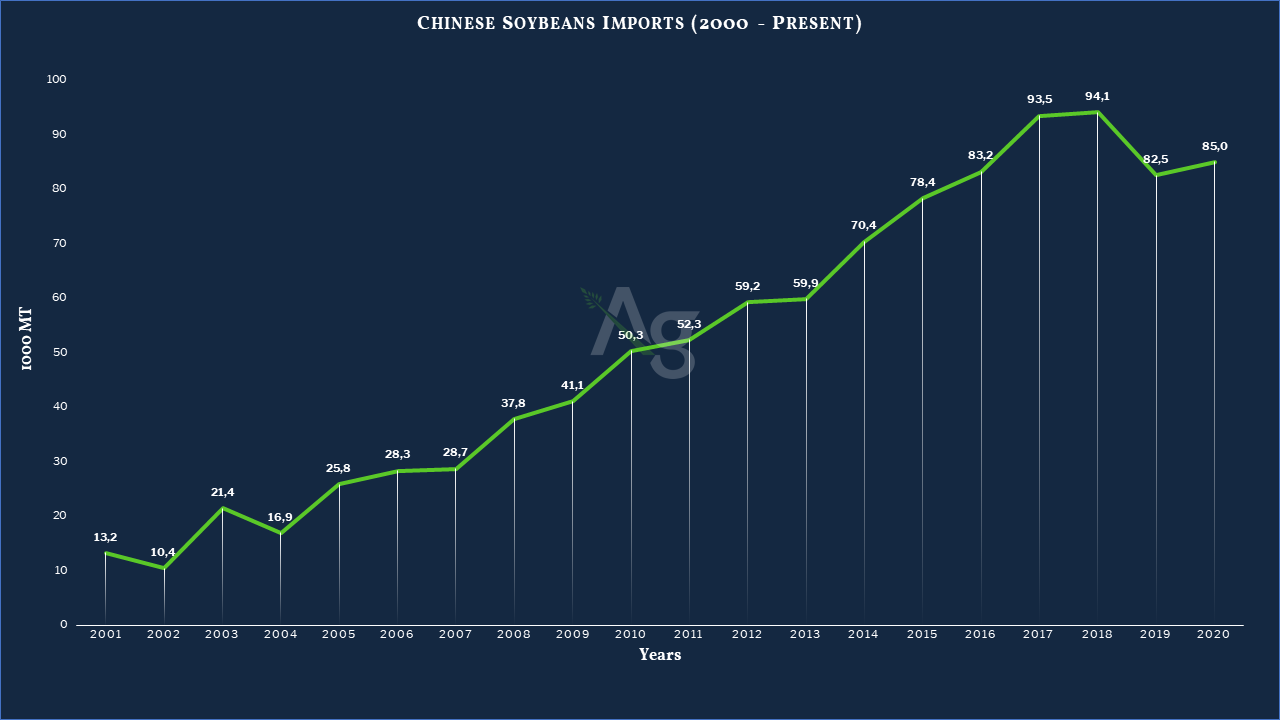 As a result of this significantly larger presence on global agriculture supply and demand, the broader behavior of the Bloomberg Commodity Index during the SARS pandemic is likely more representative of what traders should expect as a result of the Wuhan coronavirus. 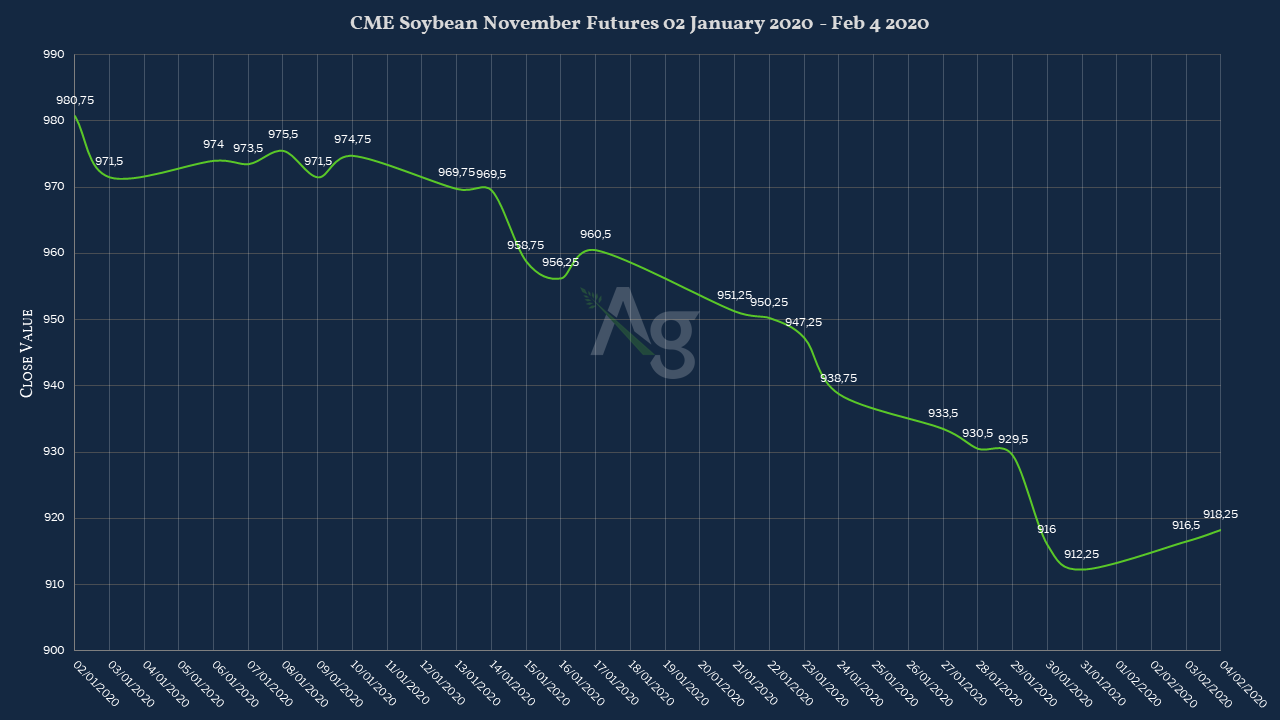 If history is any measure, then the Wuhan coronavirus spreading around the world is almost singularly comparable to the SARS pandemic of 2002-2003.

However, scientists from the Peter Doherty Institute for Infection and Immunity in Australia have successfully grown a Wuhan coronavirus sample, giving way to the possibility of a cure.

A second key difference between the SARS pandemic of 2002-2003 is the state of the global economy. China is a far more significant player today, and thus any domestic economic hit will have a far broader global impact. It is not impossible, given a comparison to 2002-2003, that the Wuhan coronavirus could push Chinese GDP growth as low as 5 percent and relay a significant hit to an already slowing world economy.

Similarly, in the case of agriculture, particularly soybeans, China’s role in global imports has risen markedly, and this is being reflected in soybean futures prices since the announcement of the virus.

However, if we can use history as a guide, and if this case is not different, then commodities prices generally recover from virus-induced panic selling after a virus, SARS, in particular, has reached the peak of their spread.

Likely the most pertinent approach for agriculture traders, especially soybean traders, anticipating the price impact of the Wuhan coronavirus moving forward – if the SARS pandemic is an apt comparison – is to observe the rate of new infections as a measure of when the peak of the epidemic has occurred.

This article does not constitute financial advice.