“The price of corn will not trade at zero.”

Such a statement – obvious to the point of ridiculous just months ago – seems somewhat less silly in a 2020 coronavirus pandemic economy where crude oil futures (NYMEX WTI) settled on April 20, 2020, at negative $37.63 per barrel.

The unprecedented value of WTI futures, breaking the previous record low of $10.42 per barrel set on March 31, 1986, was the result of delivery mechanics on the expiring May futures contract as opposed to fundamentally logical pricing.

Without venturing into the details, WTI futures specify that futures longs, i.e., those who own the contract, must take delivery of the oil in Cushing (Oklahoma) if these buyers remain long into the expiration of the contract.

Therefore, with expiry for the May contract on April 21 and little to no available storage capacity in Cushing, WTI futures longs had no option but to sell into a market well aware of the predicament.

NYMEX WTI futures are, as of writing, trading at around $18 per barrel, a level not seen since the 1990s and a level not approached since November 15, 2001, when the December contract closed at $17.84.

Similarly, corn has only traded at around $3 during the same periods.

With WTI having well and truly broken the $30 line and having established itself over the last half of April 2020 at 90s nominal price levels, one question emerges: Can U.S. corn break its long-held $3 price floor? 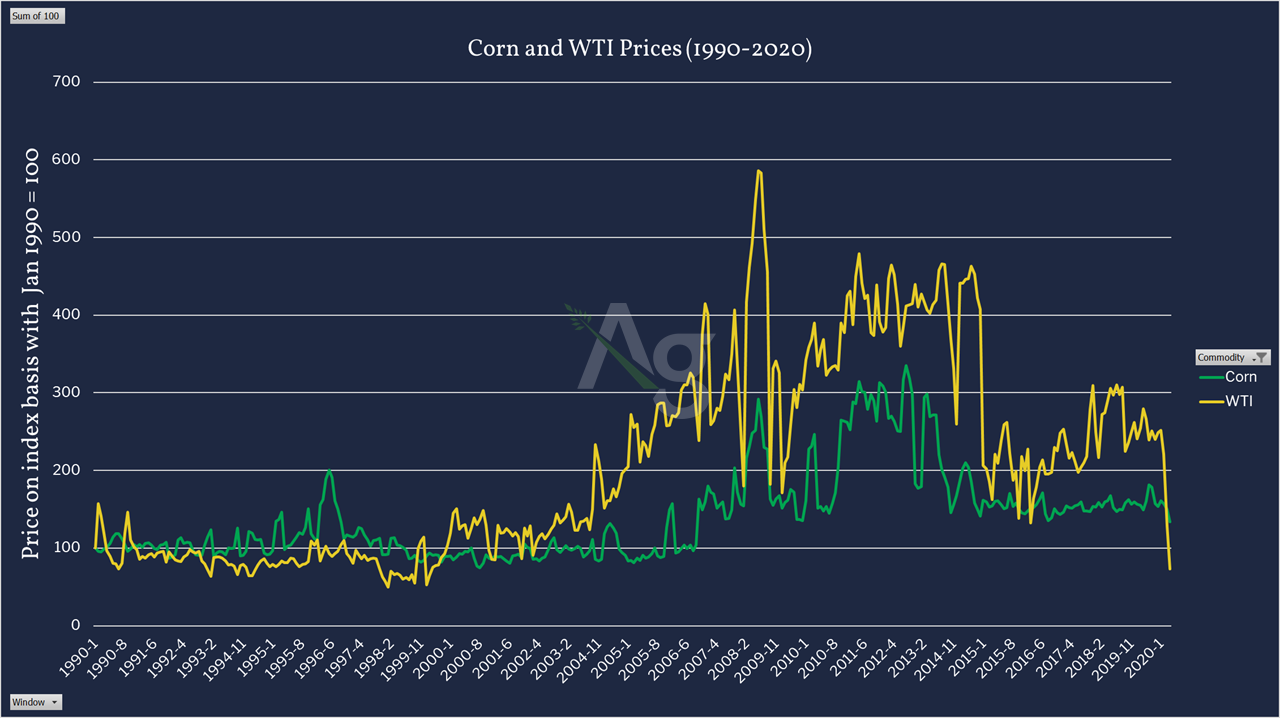 Corn and crude oil are certainly not the only commodities which have, since 2006/2007, exhibited some form of long-held and widely accepted price floor through even the worst of times. Many other commodities have found a new nominal level of price lows since the turn of the century and the beginning of what is often called the 2000s commodities boom, or commodities super-cycle. 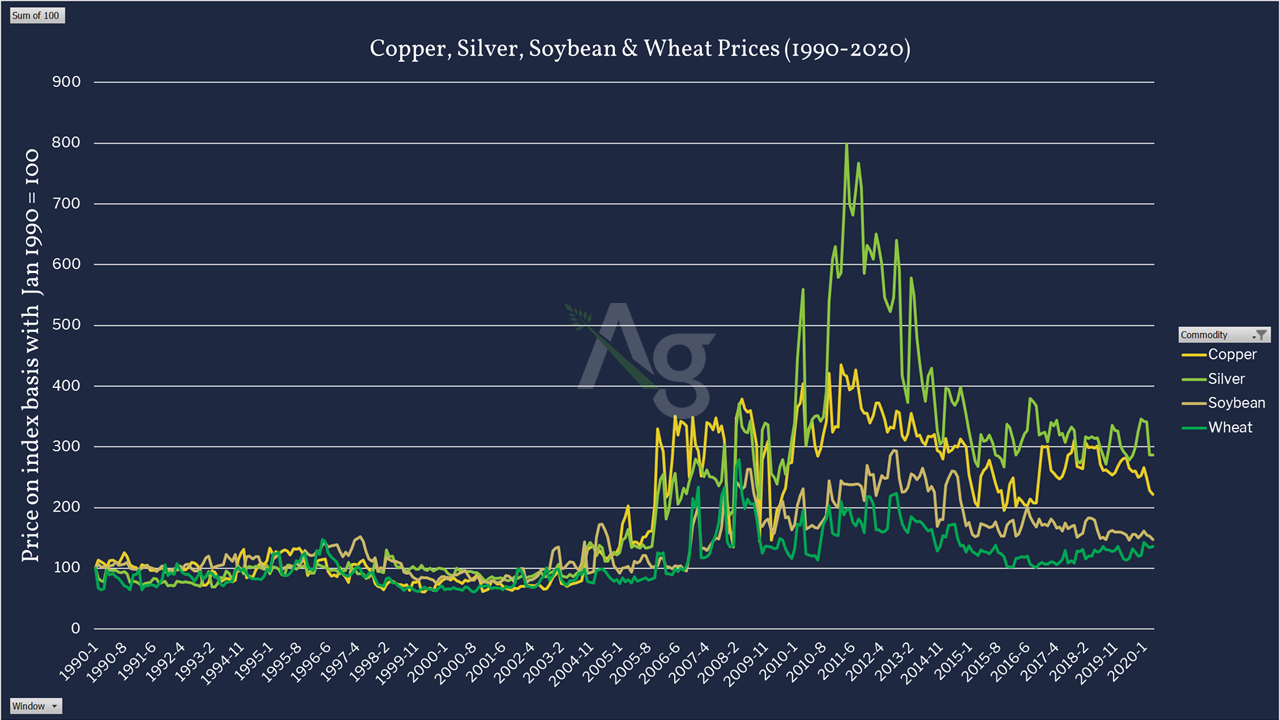 In short, industrial commodities price levels over the past 40 years, nearly universally, can be split into two periods:

Many discussions about the 2000 commodities boom concluded that the super-cycle ended in 2014. And indeed, there was a significant change in activity in 2014. However, it is notable that even as the more than a decade long boom cycle had ended in 2014, most industrial commodities still maintained a nominal price floor that prevented substantive moves back to price levels deemed acceptable in the 1980s/1990s.

The American Energy Independence and Security

The Energy Independence and Security Act of 2007 dramatically changed the nature and economic role of U.S. corn. With the U.S. as the world’s largest producer and exporter of corn, the commodity morphed from a food input, to at least in part, an energy product.

In the 2005/2006 crop year (that is, corn planted in the spring of 2005, harvested in the late summer of 2005, and used throughout the period until May of 2006) the USDA reported that 1.61 billion bushels of corn were used for ethanol production during the period or a total output of 11.11 billion bushels. Or roughly 14% of the total corn production. 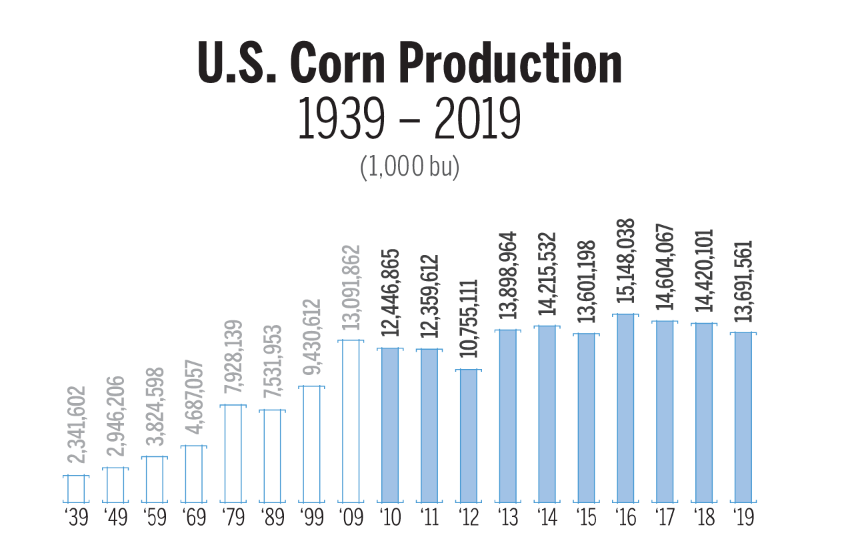 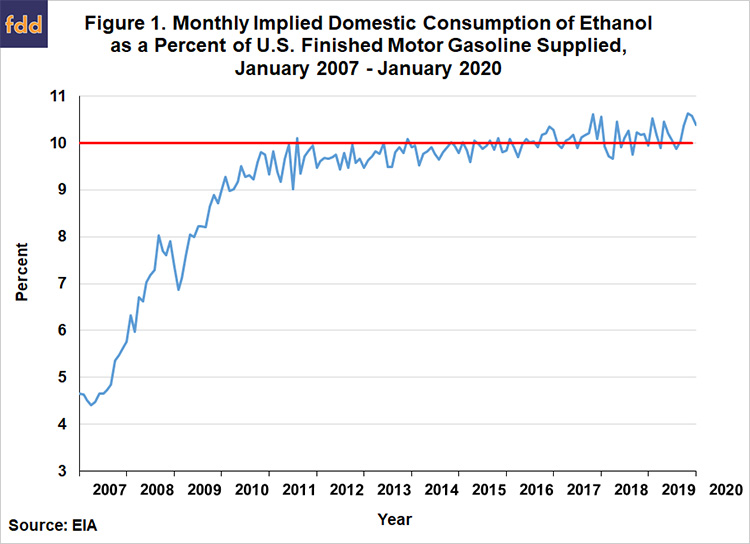 Storage and a Change in Producer Marketing

Finally, one of the most significant price supports for corn has been the rapid rise in domestic U.S. storage facilities. The American farmers applied a nearly Biblical approach to the windfall incomes the industry realized between 2007 and 2014. They invested their newfound and somewhat unexpected income in building on-farm storage capacity, among other investments.

This investment decision is reminiscent of Genesis 41, 29-30, which reads: “Seven years of great abundance are coming throughout the land of Egypt, but seven years of famine will follow them.” In response to this economic environment, Hebrew patriarch Joseph, who was an advisor to the Egyptian government, suggested rapid and expansive build-up of storage capacity. The concept was simple – if we have a period of great blessing to be followed by a period of famine, we should build the capacity to store grains during prosper times to survive in dire periods.

Similarly, the American farmer invested in storage during the commodities boom of the first 15 years of the 21st century.

According to a December 2018 Rabobank report, the American producer increased on-farm storage capacity by 20% between 2005 to 2018, with most of the build-up occurring between 2005 and 2014.

To put the significance of this storage capacity build-up into perspective, let us consider the carryout. Carryout is the amount of any agriculture product carried from one crop year to the next. A two-billion bushels carryout in the U.S. is a large carryout, one resulting of a very productive year with no weather problems.

Between 2005 and 2018, according to Rabobank, the American farmer built enough storage capacity to store the entire corn carryout in a good year. This storage build-up changes price dynamics. In essence, American agriculture producers gained control of the price floor with the ability to store the crop. The American farmer, in aggregate, has the physical capacity to decide not to sell.

Furthermore, the period between 2007 and today introduced a second phenomenon – access to technology and data. The American corn producer has as much access to data as the most prominent global traders, including ADM, Bunge, and Cargill. He can store his production and has access to the tools to make an informed decision. 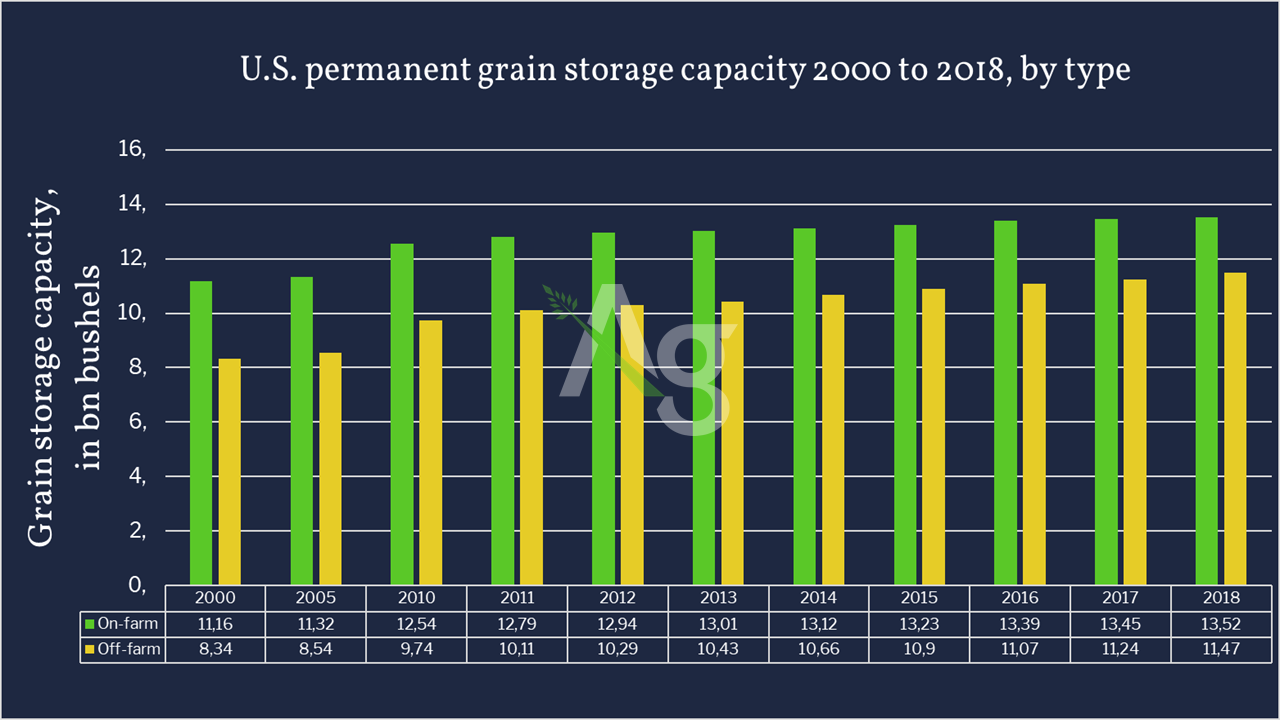 Will the Price of Corn Follow Crude Oil Futures and Break its Long-Held $3 Floor? 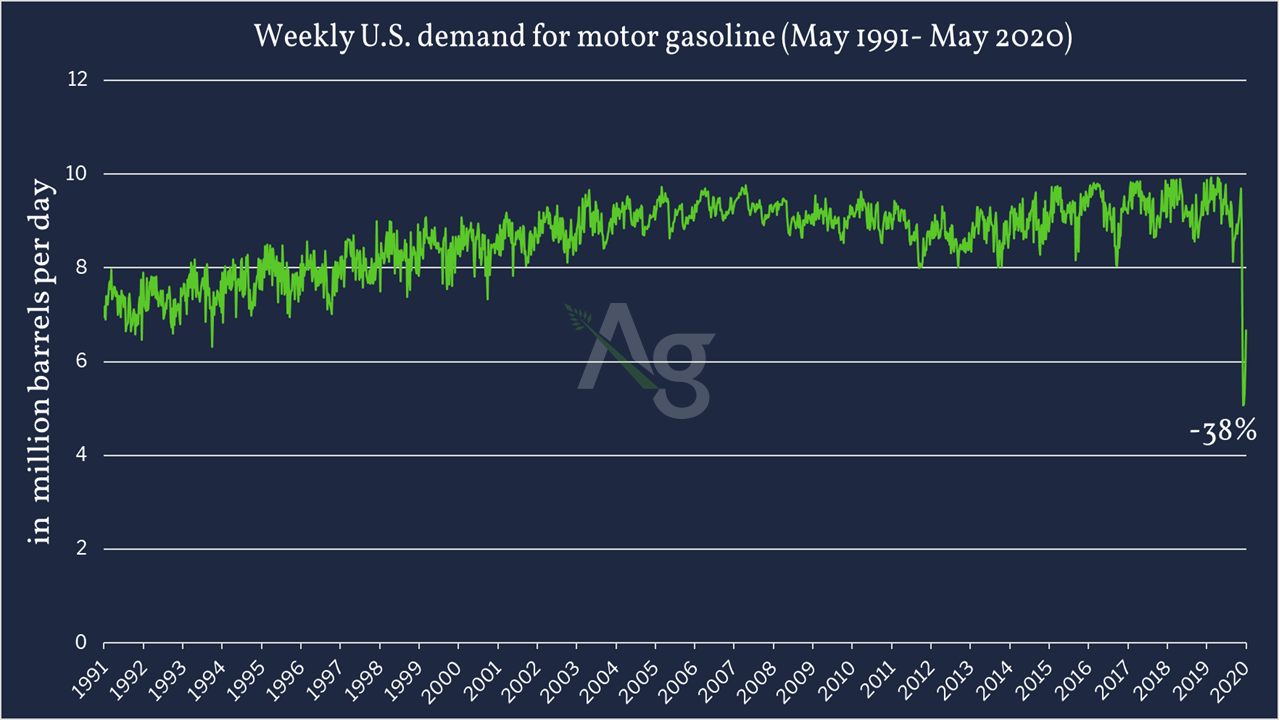 Assuming the ethanol blend into gasoline products – or the amount of ethanol used in each barrel of gasoline – at roughly 10%, this means the month of April reduced ethanol production by 1.3 million barrels of ethanol, which translates into 151 million bushels of corn reduction in merely the month of April.

The United States Department of Agriculture’s (USDA) published on March 31, 2020, its Prospective Plantings report – one of the main releases of the year. In which, it indicated producers’ intentions to plant 97 million acres of corn in 2020. That is the world’s largest corn crop in human history.

The Prospective Plantings report is published once a year on the last day of March. It is a survey conducted yearly by the USDA, in which American producers state how many acres they expect to plant for each crop. This highly awaited forecast provides the market with a solid expectation of the size of each crop for the coming crop year, barring weather disruptions. However, the report is a projection with caveats – it reflects planting expectations, not planted corn.

Once producers have decided to plant, their hands are often tied. Some farmers might have an agreement where they can exchange their corn seeds and related inputs for producing another product. But in most cases, once American producers have invested in producing a particular crop by purchasing seeds and fertilizer, they are locked in this position. Concretely, if you intend to grow soybeans, you buy a specific blend of fertilizer and nutrients optimized for soybeans. If you want to plant corn, this calculus is dramatically different.

Under current planting intentions and consumption trends, a massive corn supply appears to be a likely scenario during the 2020/2021 marketing year.

For perspective, recall that American carryout (corn carried from one year to another) is generally between 1.7 and 2 billion bushels. This means that the American farmer is currently on pace to produce 1.2 billion additional bushels on top of the average carryout, in short, setting the 2020/2021 carryout to be roughly 66% percent higher than a “normal” U.S. corn carryout.

Since 1997, final corn planted acreage as opposed to planting intentions announced during March only dropped by over a million acres (with a record of 3.1 million acres in 2019) on five occurrences:

In conclusion, a record crop is likely coming, unless planting season difficulties reduce the producer’s ability to plant their intended acres. As for the demand, it has decreased significantly as the need for ethanol erodes due to global travel bans and the pandemic economy, which are highly destructive to fuel demand.

If there is one thing that coronavirus has made clear, it is that forecasting can prove complicated. Therefore, let us keep it simple and stick to addition and subtraction.

According to the USDA’s April 2020 report – which does not include the known increase in planting intentions – the corn carryout for 2019/2020 is 2.1 billion bushels.

The April 2020 USDA report also did not include the marked reduction in gasoline – hence ethanol use – in April, which could mean as much as 150 million bushels of corn, pushing the 2019/2020 carryout to well over 2.2 and closer to 2.3 billion bushels.

Finally, keep in mind that the April 2020 WASDE forecast explicitly ignores a possible 1.1 billion bushel increase in production, based on 97 million acres of corn planted and corn yields matching that of the crop grown in 2019.

This simple accounting leads to a potential 2020/2021 carryout approaching 3.4 billion bushels of corn and does not consider any extended reduction of gasoline use throughout the summer of 2020.

In such an environment – if corn planting goes according to plan, and no weather event significantly reduces yield per acre – the $3 per bushel price floor might be a difficult line to defend.