Year of the Tiger: Is China Going to Pounce on Soybean, Corn & Barley in 2022?

In 2021, China massively imported Grains & Oilseeds from around the world, reaching record import volumes and directly contributing to a global bull market, as well as the freight congestion crisis. However, later on in 2021, China slowed down on imports as domestic stock units filled up and domestic prices decreased, also contributing to Soybean crush margins reducing and even becoming negative. In 2022, China declared its intention to promote domestic crops over imports thereby decreasing imports over the year compared to 2021. Despite this declaration, China imports in January 2022 increased by 8% compared to 2021, and February imports are already on pace to overtake the total volume imported in February last year. Therefore, are Chinese imports going to follow the trends according to reports, or does China have other plans in 2022?

China imports an extensive range of Grains & Oilseeds to feed its population and fuel its livestock industry, as it is the largest pork producer globally. The top import commodities are Soybean, Corn, and Barley. Unlike in 2020/21, Chinese supply and demand crop reports for 2021/22 forecast similar or lower imports for these three commodities compared to the previous year. 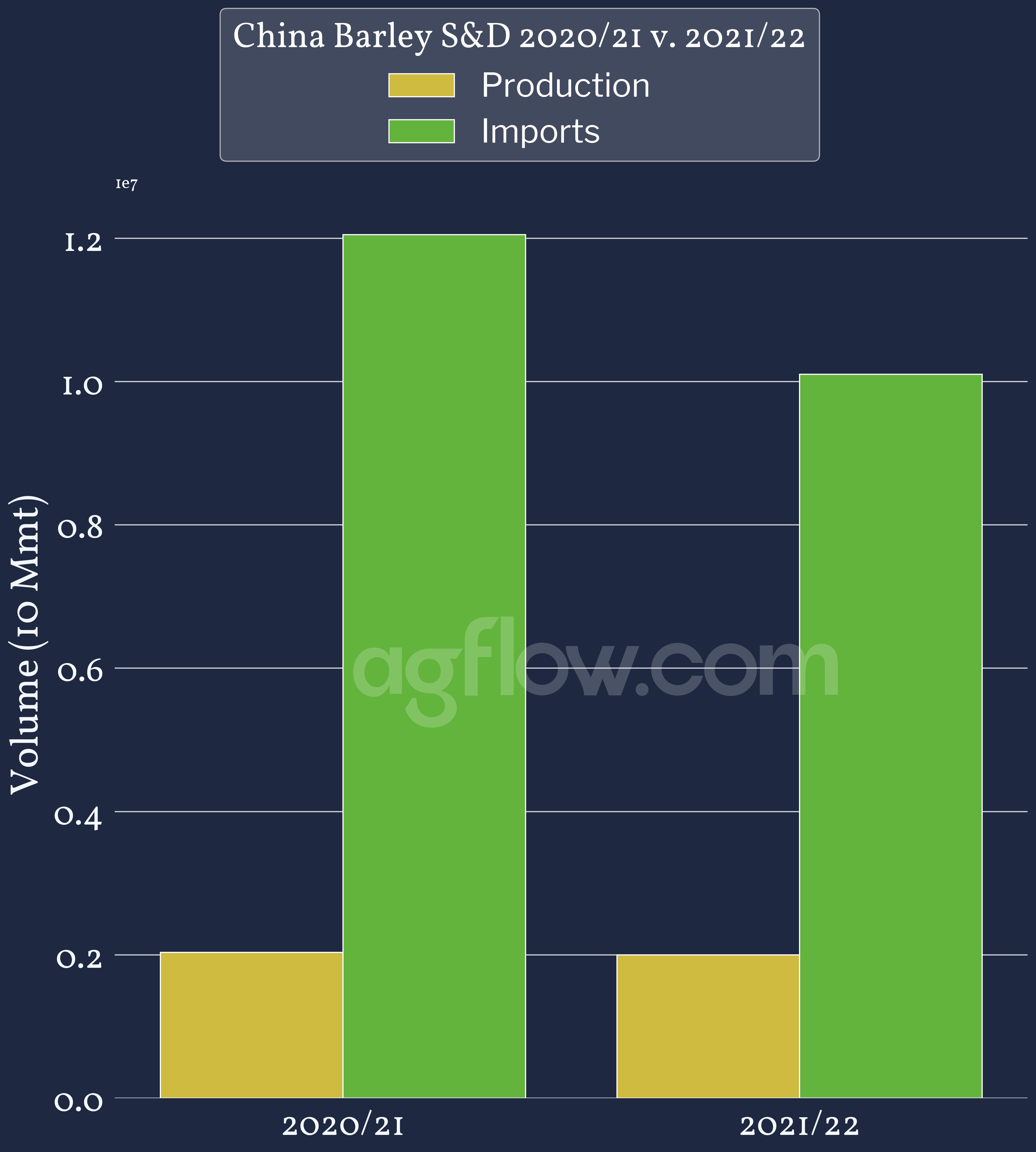 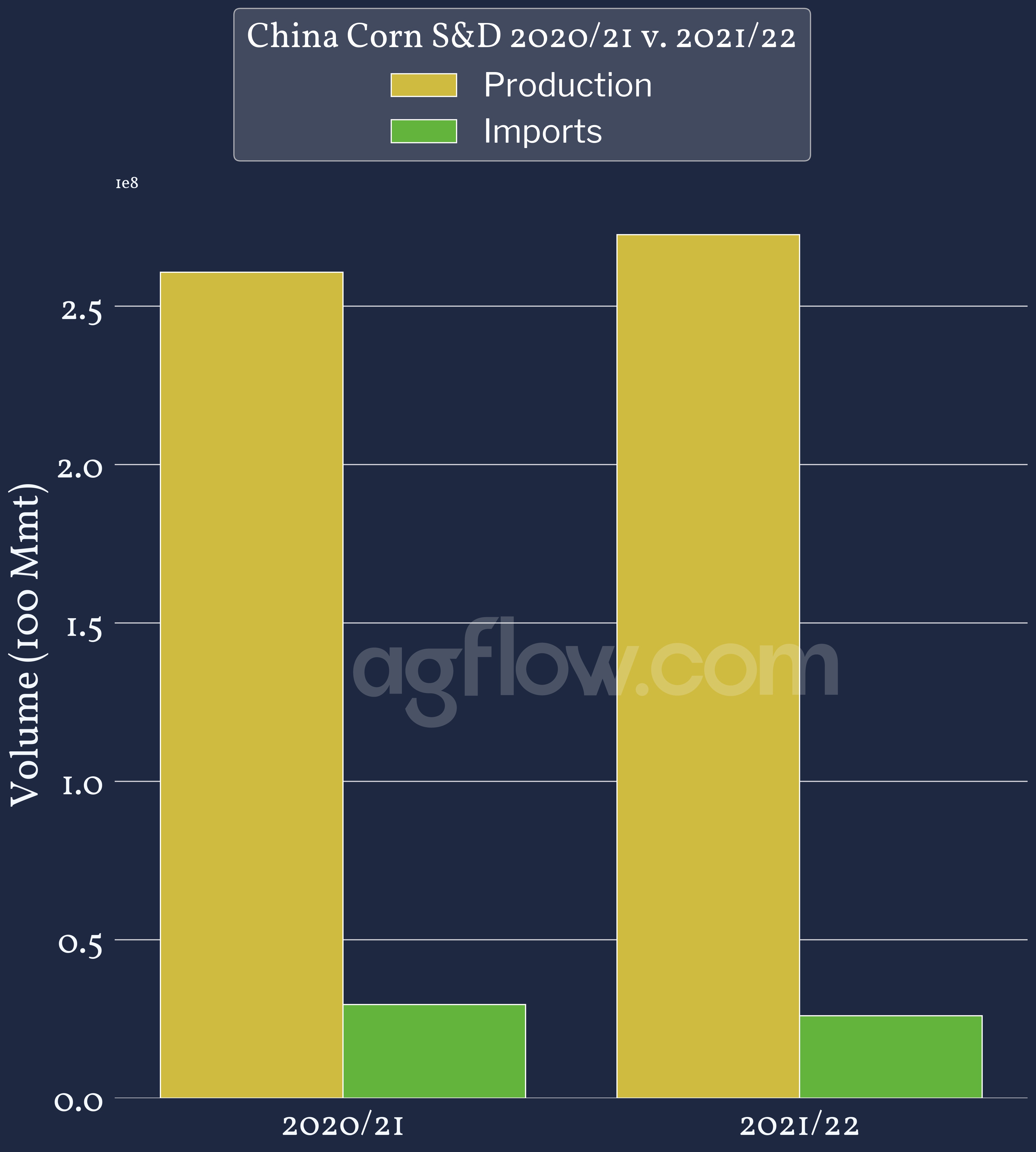 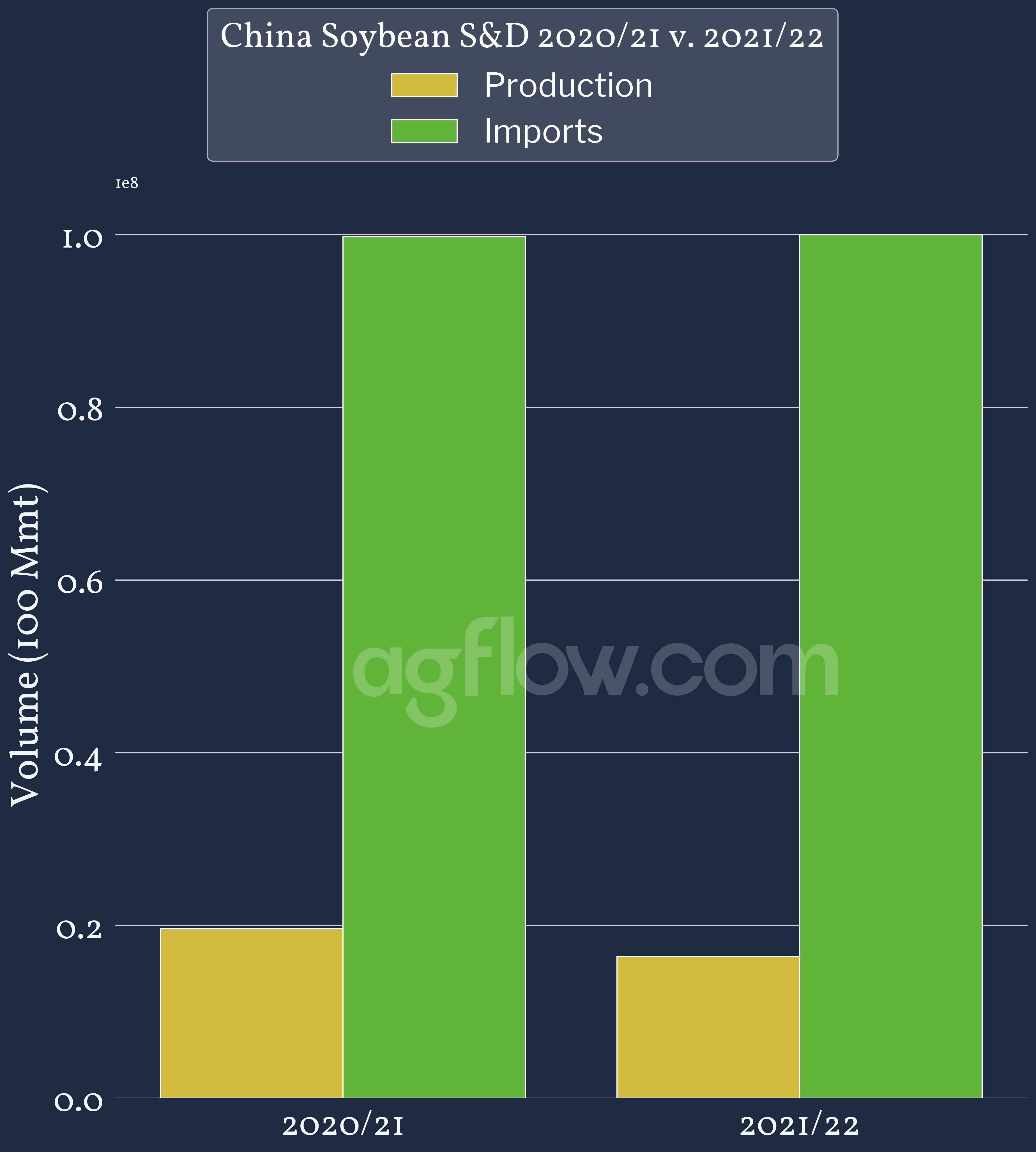 China Barley, Corn, and Soybean production and imports displayed in Figure 1 show China plans to reduce Barley and Corn imports in 2021/22, but for different reasons:

Soybean differs from the other two major commodities because while production is estimated to be lower by around 3 Mmt, imports are improving only by 238 kmt. Therefore, Soybean supply is decreasing by 2.762 Mmt, representing about 2.3% of the 2020/21 supply, and thus remaining roughly similar overall. 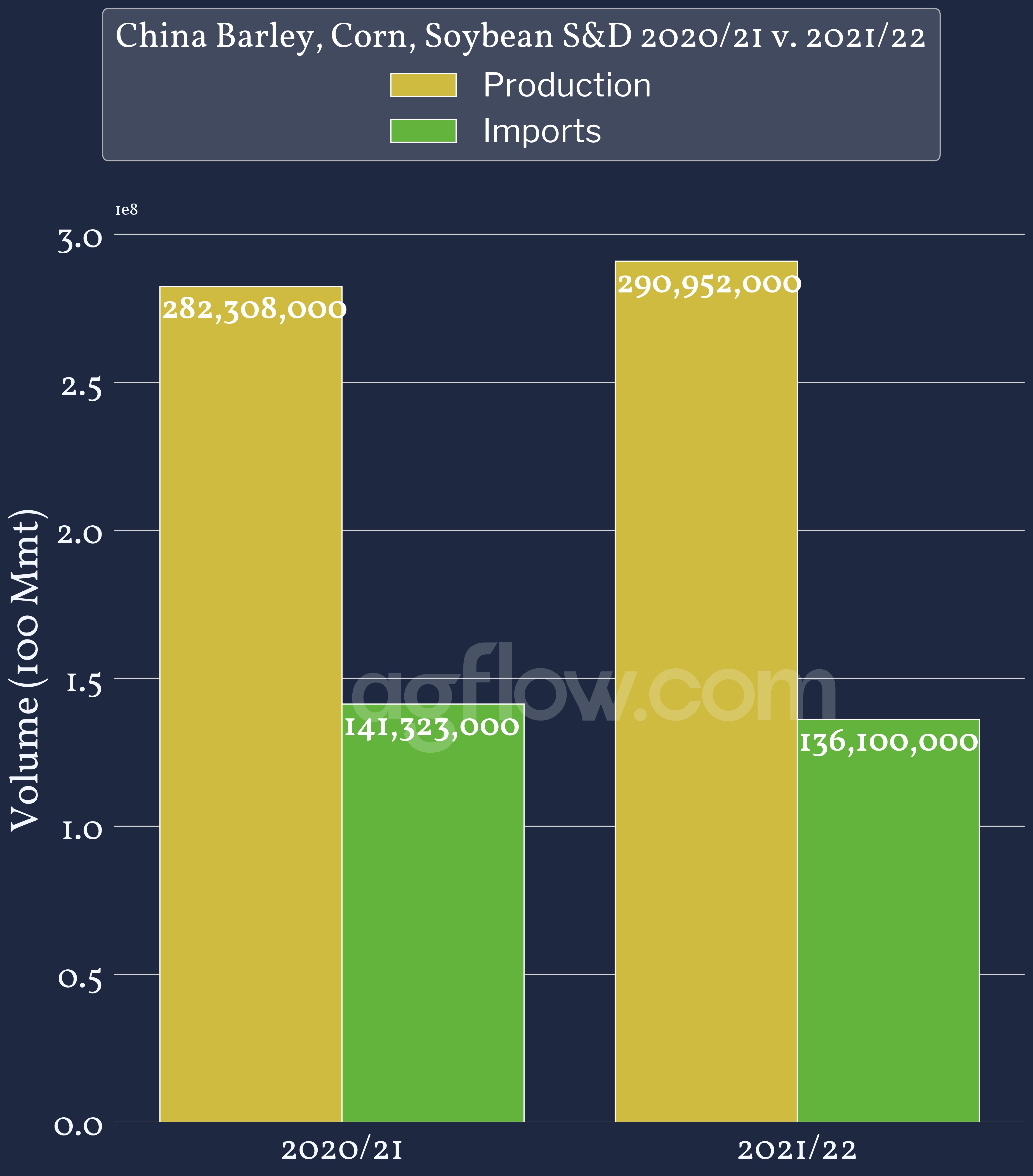 The total Production and Imports for China Barley, Corn, and Soybean in Figure 2 show that for the top 3 commodities, China intends to rely more on domestic production in 2021/22 and decrease imports to retain an almost similar total supply. China’s 2021/22 S&D can be interpreted as the first step towards its 5-year plan to improve domestic crop production and reduce reliance on imported products (Farm Weekly), focusing on Oilseeds and Soybean in particular.

Track Up to 19 S&D Metrics for Soybean, Corn, and 27 Other commodities in China Over 7 years

Read also: What Should You Expect From The US Soybean Crop in 2021/22? 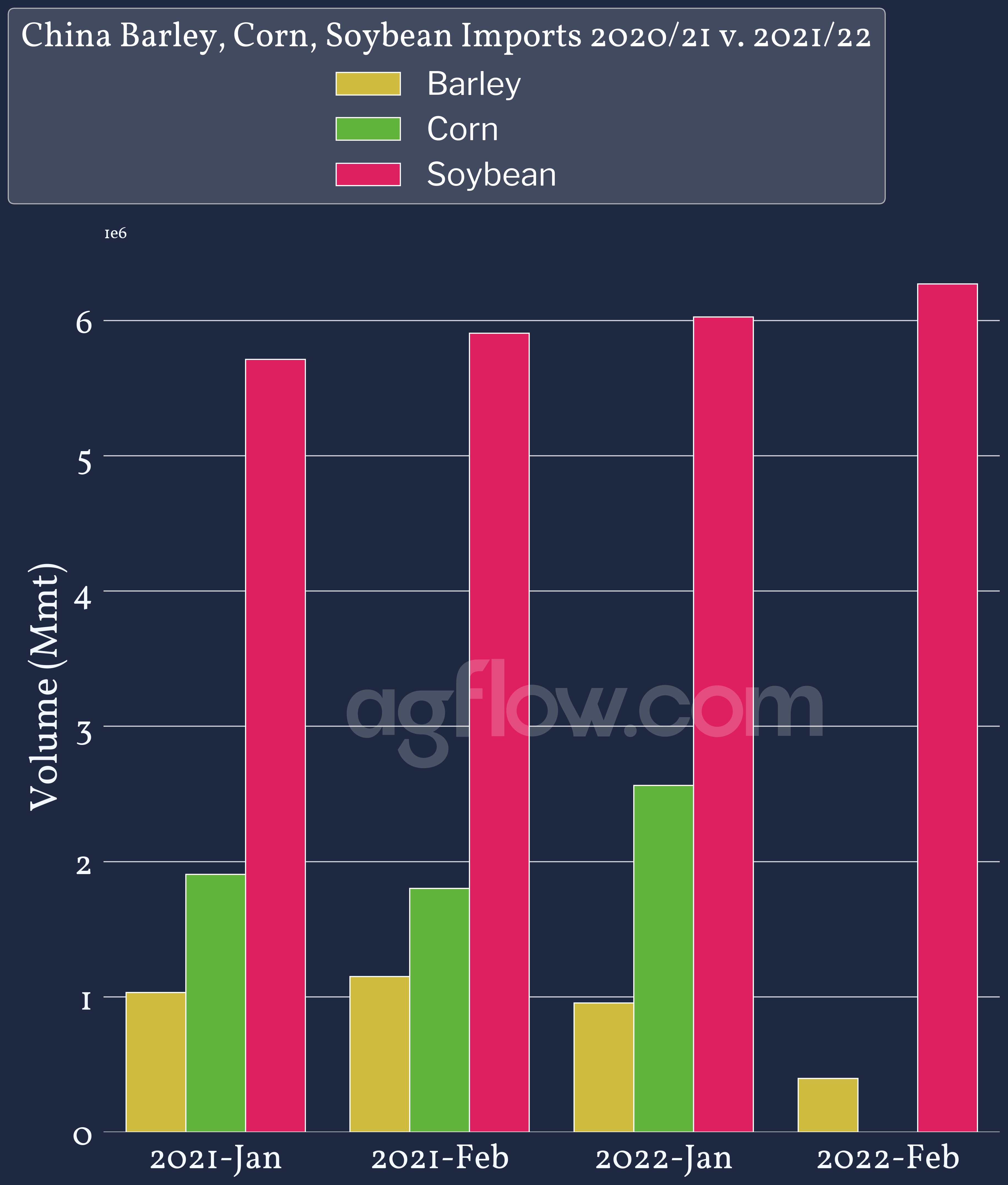 China imports featured in Figure 3 show that imports increased YoY in January 2022 for Corn and Soybean. Moreover, imports in February 2022 (dated from 02/02/2022) demonstrate that Soybean imports already exceeded that of the entirety of February 2021. Therefore, in the first two months of 2022, China is increasing its agricultural imports compared to 2021. While this could signal the beginning of a trend, it is essential to consider that in February 2022, the Winter Olympics are being held in Beijing and overlap with the Lunar New Year and Spring festival. All of those events boost food consumption, requiring large stocks of Soybean. Moreover, China’s Soybean Meal stocks are simultaneously at their lowest point in two years (Brownfield), resulting in more Soybean imports. 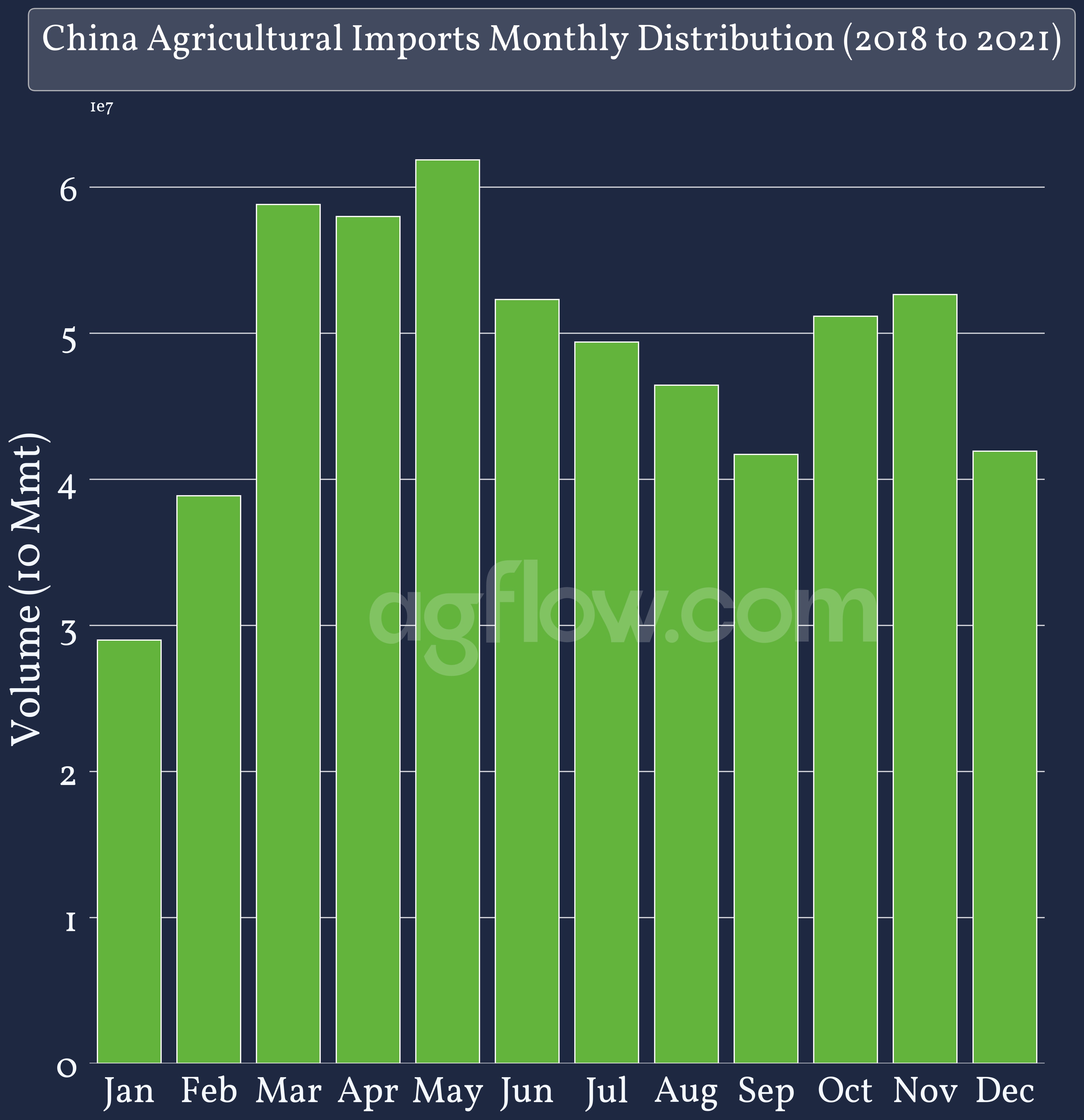 China’s cumulative import volumes by month, displayed in Figure 4, show the import volume trend across all commodities covered by AgFlow in the last four years, from 2018 to 2021. It shows that overall, January and February are slow months compared to the rest of a usual year. On the contrary, imports peak in March, April, and May with South America Soybean & Corn new crops made available. 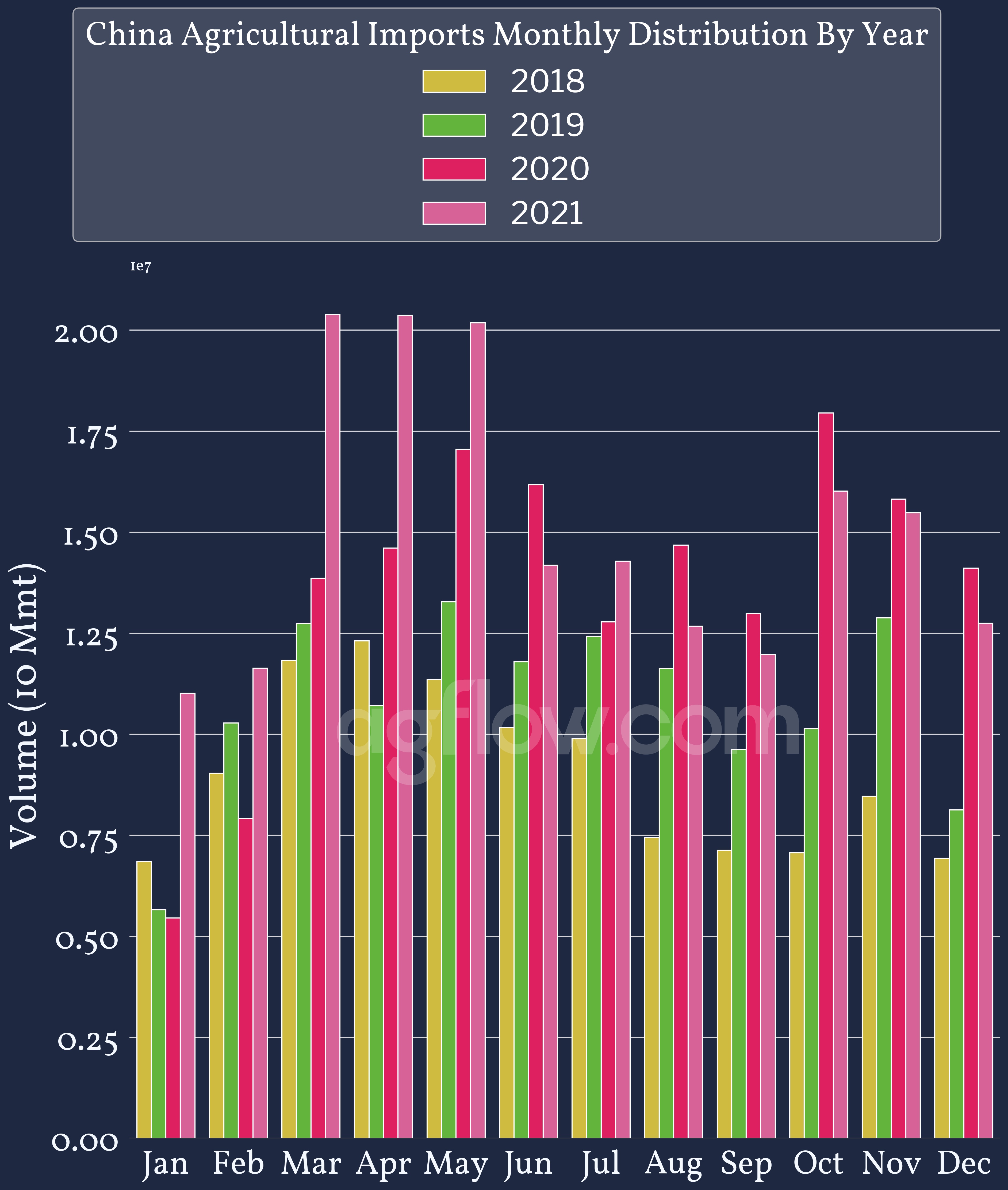 China Monthly import volume by year in Figure 5 shows that while the distribution in Figure 4 remains true, 2020 and 2021 particularly stand out. Indeed, import volumes for these two years remarkably increased compared to 2018 and 2019. Moreover, import volumes in 2021 showed more disparity than in previous years, where it was more spread out over the months in the earlier years, thus showing some bias in Figure 4. This indicates that China focused most of its imports over short periods, which could repeat in 2022. However, large imports in January and February can be attributed to the conjunction of both the Olympic games and Spring festival boosting the demand over Q1 as well as the Brazil Soybean crop, which is available sooner in 2022. Therefore, it is impossible to determine a trend for 2022 imports based on January and February. It will be necessary to wait until at least May of the same year, and most probably the beginning of June, as China is expected to have a slow demand for Soybean, dragged down by freight volatility and low pork margins (S&P Platts).

Track Soybean, Corn, Barley, and Up to 32 Other Commodities Cargo Vessels
From 13 Origins to China

After record imports in 2020/21, China S&D reports for 2021/21 show that the country intends to reduce its reliance on foreign goods and promote its local production thanks to a larger production, particularly for Corn, and due to the rampant food inflation contributed to domestic prices surge.

Nonetheless, S&D reports evolve from one month to another. In January 2022, agricultural imports increased YoY, particularly for Soybean and Corn. In February 2022, imports already reached half of the February 2021 volume in the first week of the month, thanks to large bookings for the new crop of Brazil Soybean, setting the pace to exceed 2021 February imports. However, from past years’ volume distribution, the largest import period is from March to May, and large imports early on in 2022 can also be attributed to the Lunar New Year, Spring festival, and the Olympic games overlapping, thus boosting consumption.

All in all, China intends to import less and rely more on domestic production in 2022. While imports are surging in the first half of Q1 2022, it is hard to set an import trend from these two months only as many influencing factors can explain the import boost. Moreover, the largest import period for China has yet to come, and it will probably set the trend for the rest of the year.  At which point (end of May/beginning of June 2022) it will be possible to determine whether China’s intention evolved towards more imports or not.

2 Factors That Could Impact China Agricultural Imports in 2022

The Lift on Russian Wheat Imports:

China and Russia struck a $117 bn energy deal during the first weekend of February 2022 during President Putin’s visit to the Olympic games. In exchange, China agreed to lift its ban on Russia Wheat imports. This could also spark some interest for Soybean and Barley from Russia, which could change trade dynamics for 2022. However, due to freight volatility and low supply available compared to North and South American competitors, this might only remain anecdotal.

China agricultural goods stocks are not only required to curtail domestic prices surge and guarantee strategic stocks, but also to impose political pressure. At the end of 2021/22, China is expected to have 51% of global Wheat end stocks, and 69% of global Corn end stocks. Therefore, China could potentially boost its imports in these key commodities, as well as Barley and Sorghum, to reinforce its position and pressure on global food demand.