Why Are LatAm Wheat Exports Booming in 2022?

Since the start of the conflict in Ukraine at the end of February 2022, Wheat supply has become a concern for major Black Sea Wheat importers. In Q1 2022, Argentina exports to Algeria represented ~12% of Wheat exports and grew 329% YoY. Similarly, Brazil exports to Indonesia accounted for 25.3% of its Wheat exports in Q1 2022. LatAm represents a competitive Wheat alternative to Ukraine’s Wheat supply & grew 127% YoY. But how do these origins fare against North America or Europe? 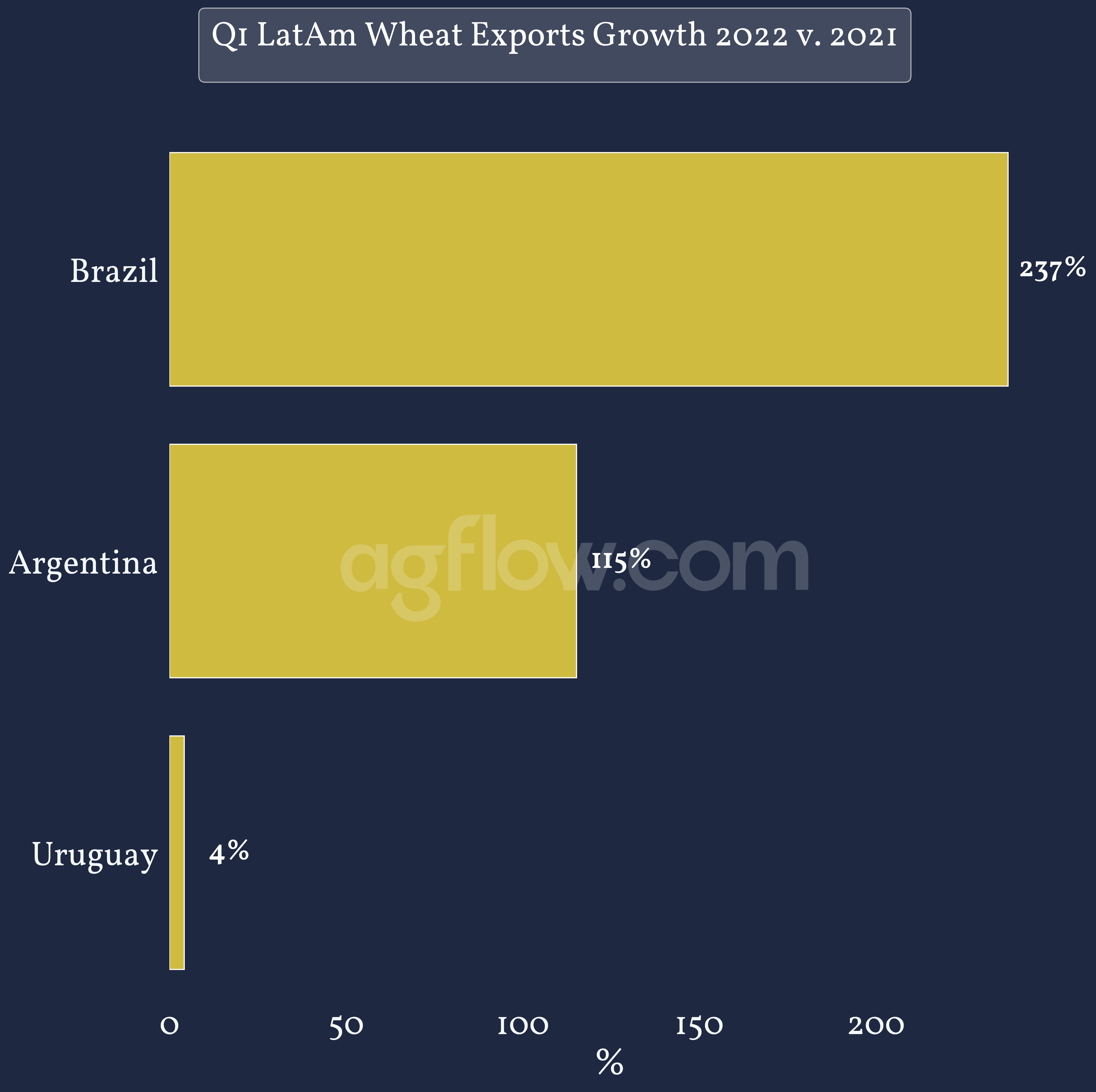 Track Wheat Cargos From the LatAm to Indonesia, Algeria, an Up to
60 Other Destinations

Read also: What Should You Expect if You Deal with the Black Sea Wheat Market In 2022?

As the Ukraine conflict sparked end of Feb, Prices spiked from fear of supply shortage, gaining up to $105/mt for US Wheat in two weeks. Meanwhile, Brazil prices only increased by 1.5% (+5$/mt) simultaneously. Since the beginning of the year, all those prices surged $119/mt (+37.6%) on average. Brazil Wheat, whose prices were around French ones in Jan, quickly became one of the cheapest Wheat sources available, & LatAm Wheat is now more competitive than Europe or North America. While Wheat importers diversified their sourcing, did they also put a brake on pricey Wheat imports? 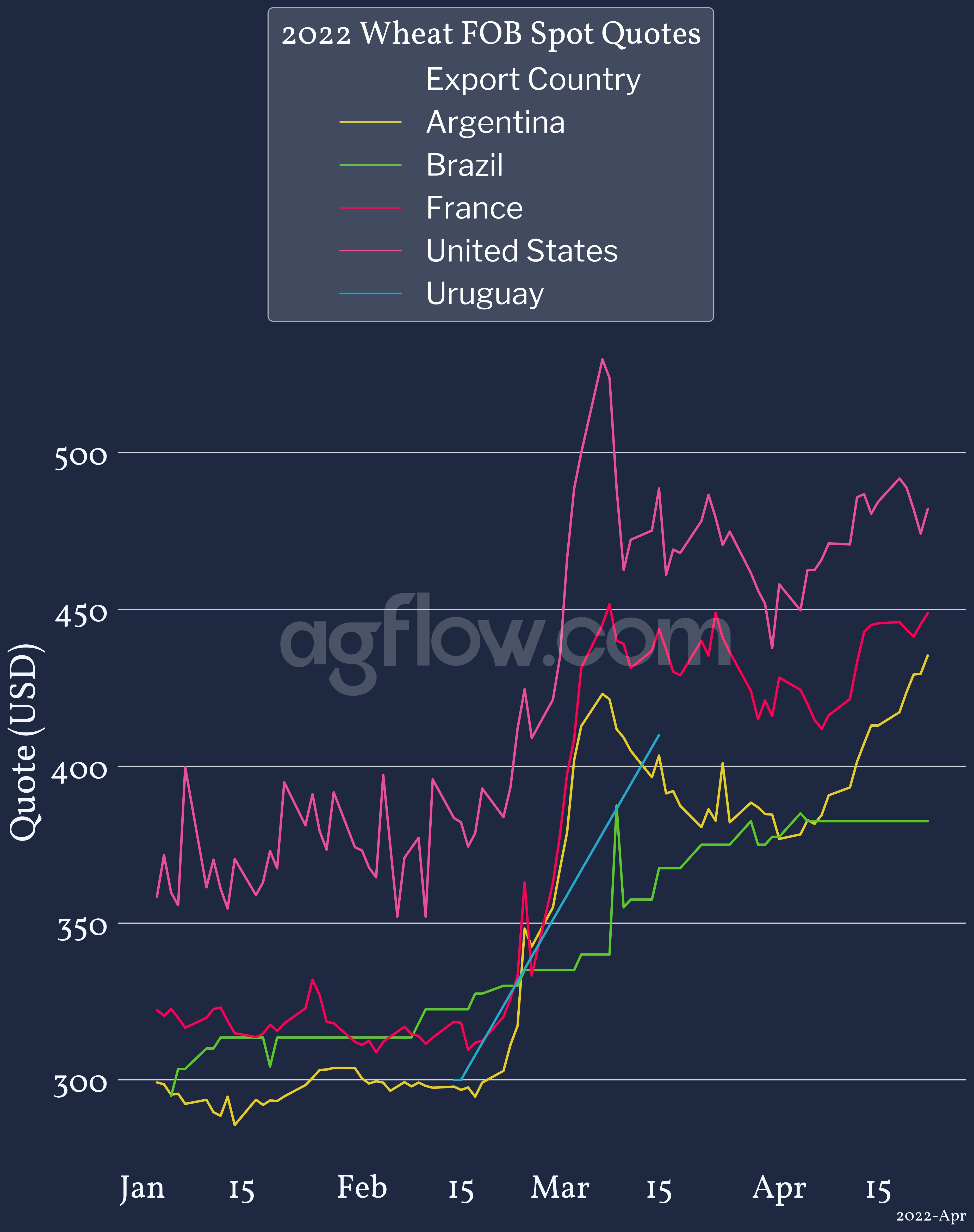 Access +40K Monthly Wheat Cash Quotes From Brazil, the US, and Up to 29 Other Origins

Read also: What to Consider if You Are Trading Argentina Wheat in 2022

Since Ukraine Wheat exports shut down, importers preferred diversifying their Wheat pipelines with the cheap and accessible Brazil & Argentina supply rather than increasing imports from established ones. While Vietnam imported around ~70 kmt of US Wheat  in Q1 2022 (+60 kmt YoY), the LatAm supply led most importers to decrease Wheat imports from other sources. French exports to Morocco fell by 138 kmt, and Russia exports to Pakistan plunged by 345 kmt YoY, & these gaps were covered mainly by Argentina & Brazil. 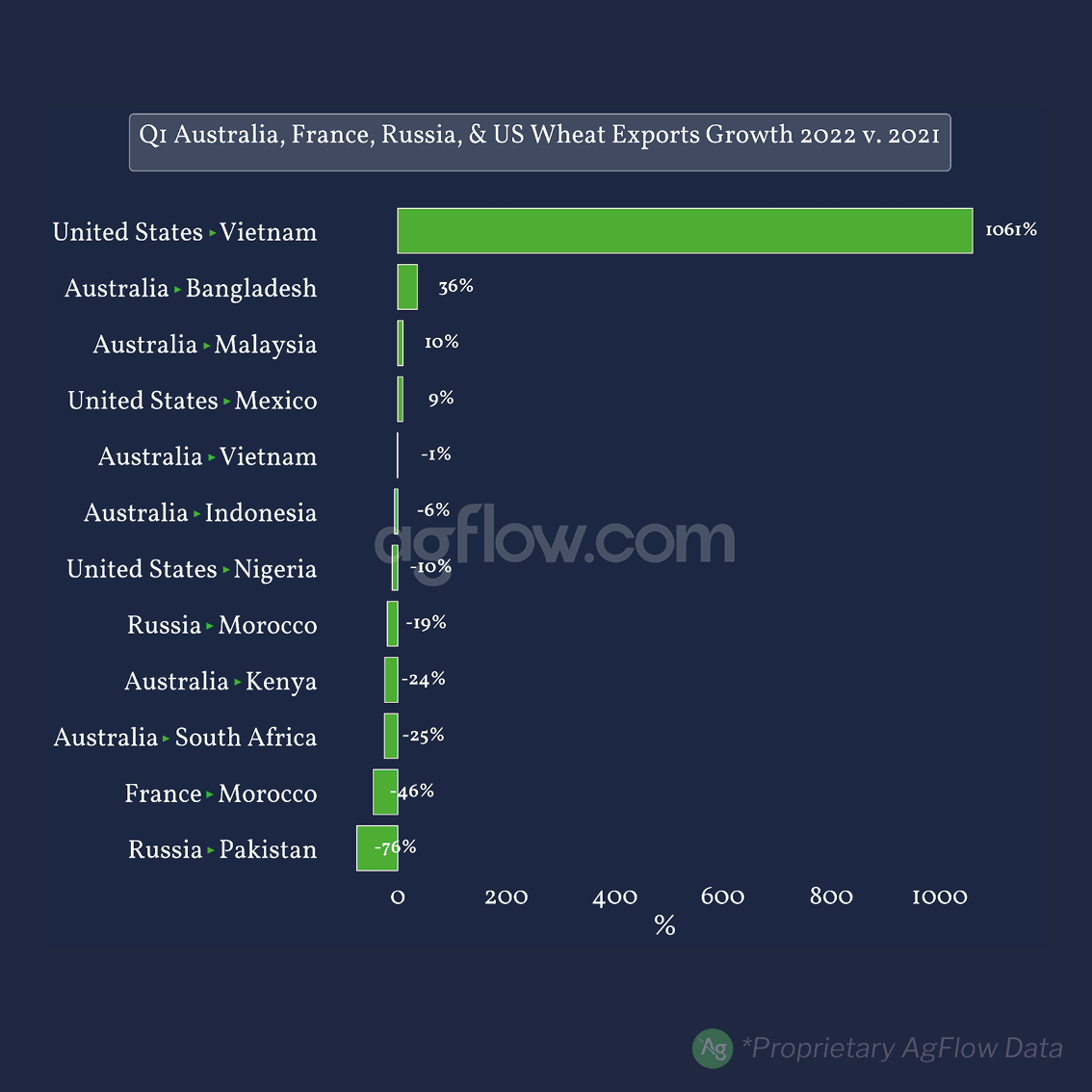 LatAm Wheat exports in 2021/22 (From Nov 21 to Apr 22) grew 113% YoY so far. Exports to usual Ukraine Wheat importers are growing, particularly for Indonesia, increasing ~296% YoY and almost doubling its share of LatAm Wheat exports. Still, the primary market for LatAm remains the MERCOSUR intra-trade despite losing 9.3% of market shares in 21/22 so far, with Brazil and Argentina representing 20.6% & 12.4% of all imports, respectively.

Track LatAm Wheat Export Growth  to Indonesia, Morocco, and Up to 60 Other Destinations

Since the beginning of the marketing year in the Southern Hemisphere, LatAm Wheat exports have been surging, with Argentina and Brazil at the forefront. This trend accelerated at the end of February with the start of the conflict in Ukraine.

Due to Ukraine exports shutting down, Wheat prices surged and gained up to $105/mt in two weeks. LatAm Wheat cash prices, which were competing with French (and thus EU) Wheat prices, suffered less from this crisis and became some of the most competitive along with Australia and, in some respects, India. This helped boost LatAm Wheat exports as countries that relied on Ukraine Wheat supply had to turn to another pool of Wheat sources which remained relatively cheap and available. Nonetheless, LatAm’s first market remains the MERCOSUR, thanks to its free-trade deals and well-established pipelines.

All in all, LatAm Wheat is currently in a great position thanks to low prices, new supply availability, and strong demand from usual Ukraine Wheat importers. However, MERCOSUR channels a sizeable share of the supply available and remains a priority for these origins. Therefore, LatAm Wheat became an excellent opportunity for importers due to the market conditions, but it cannot sustain continuous demand and fully replace Ukraine in the long term. On the other hand, LatAm continues to supply East & West Africa alike and will probably remain a great alternative to major importers in the first half of the calendar year.

Read also: Can US Winter Wheat be Attractive in 2022?