What Should You Be Expecting if You Are Selling From the EU Or US Corn Market in 2021/22?

The Corn Market in the US and the EU in the marketing year 2021/22 faces difficulties with regards to production. The US has faced significant drought events in the Corn Belt since the beginning of 2021, which led to uncertainty about the supply and drove the price volatility through the roof. Meanwhile, in the EU, heavy rain and storms in Summer 2021 damaged some of the crops. Despite these weather events, some countries in the EU, such as France, saw large yields thanks to the consistent moisture levels. However, this also drove the quality of the crops down.

China is at the center of discussions for the US and EU Corn markets’ demand. But they also face heavy competition from Brazil/Argentina and Ukraine, respectively. The most recent Chinese crop also suffered from floodings and quality concerns (reuters.com), which could change the world’s demand for the largest grains importer. Additionally, the US and the EU can count on solid pipelines from major importers and new ones emerging from changes in the global market.

This means that expectations in 2021/22 rely on the quantity and quality of supply and how China will shape the global demand distribution.

Jump to conclusions: 3 Things You Should Track Coming Into 2022 If You Are Selling EU or EU Corn?

The US Corn market experienced high cash prices volatility in 2021 due to the uncertainty of the supply available for 2021/22. Indeed, the US Corn crop, similarly to Wheat, suffered from droughts resulting from La Niña. The floodings, storms, and hailstorms in Europe also impacted Corn growth. Although estimates remained high throughout the months, the quality drop led production estimates to scale down. 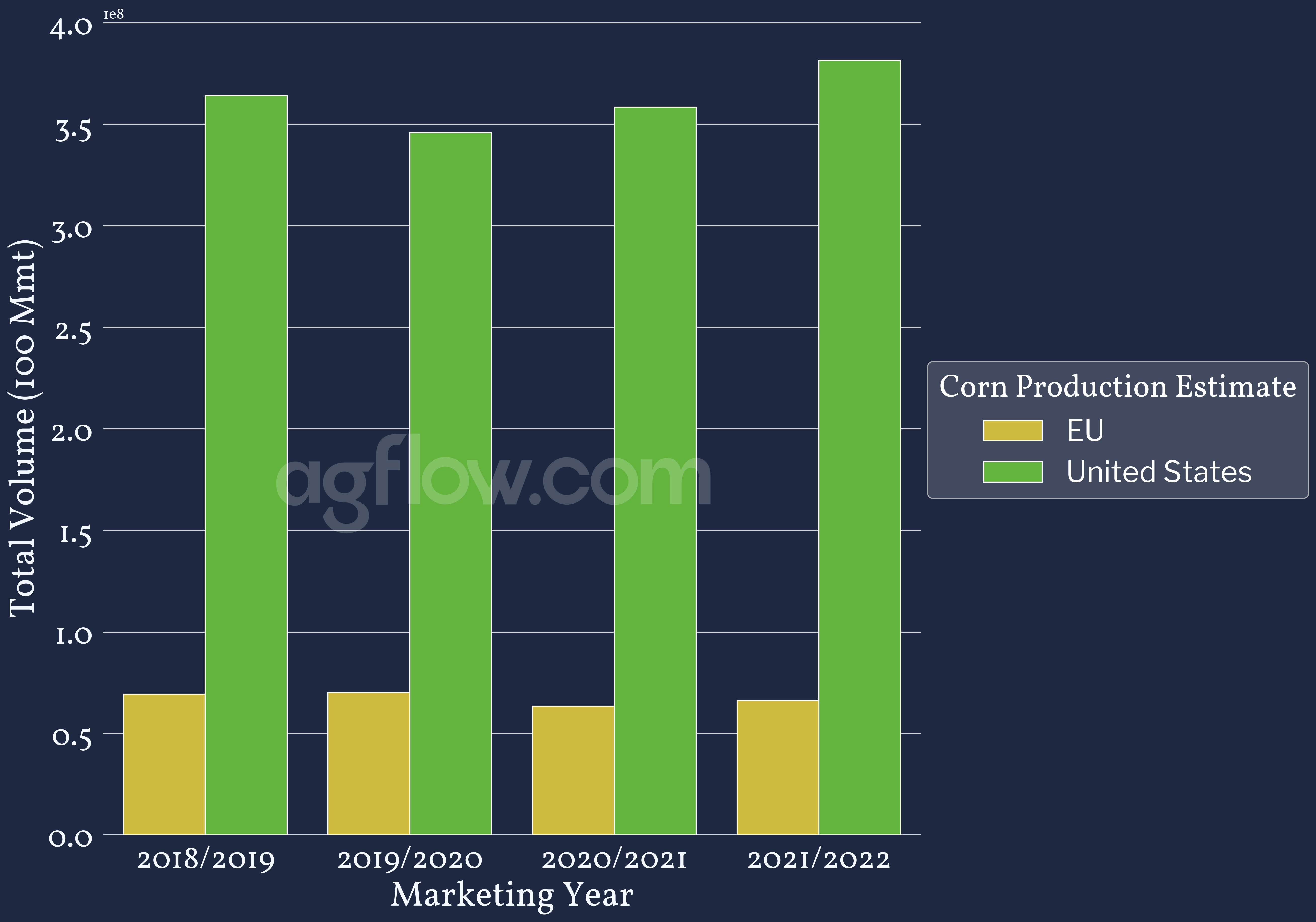 Despite all these difficulties, crop estimates in the US increased as the outlook continually improved. The latest estimates show that the 2021/22 US Corn crop is the largest in the past four years, beating the all-time record from 2017/18. However, the EU crop is only slightly better than the previous marketing year and below that of 2018/19 and 2019/20. With final yield estimates decreasing in light of mixed test results on the crop, the EU production estimate decreased as well month-to-month (feednavigator.com). The pricing also evolved as a consequence of how the market estimated the Corn production. 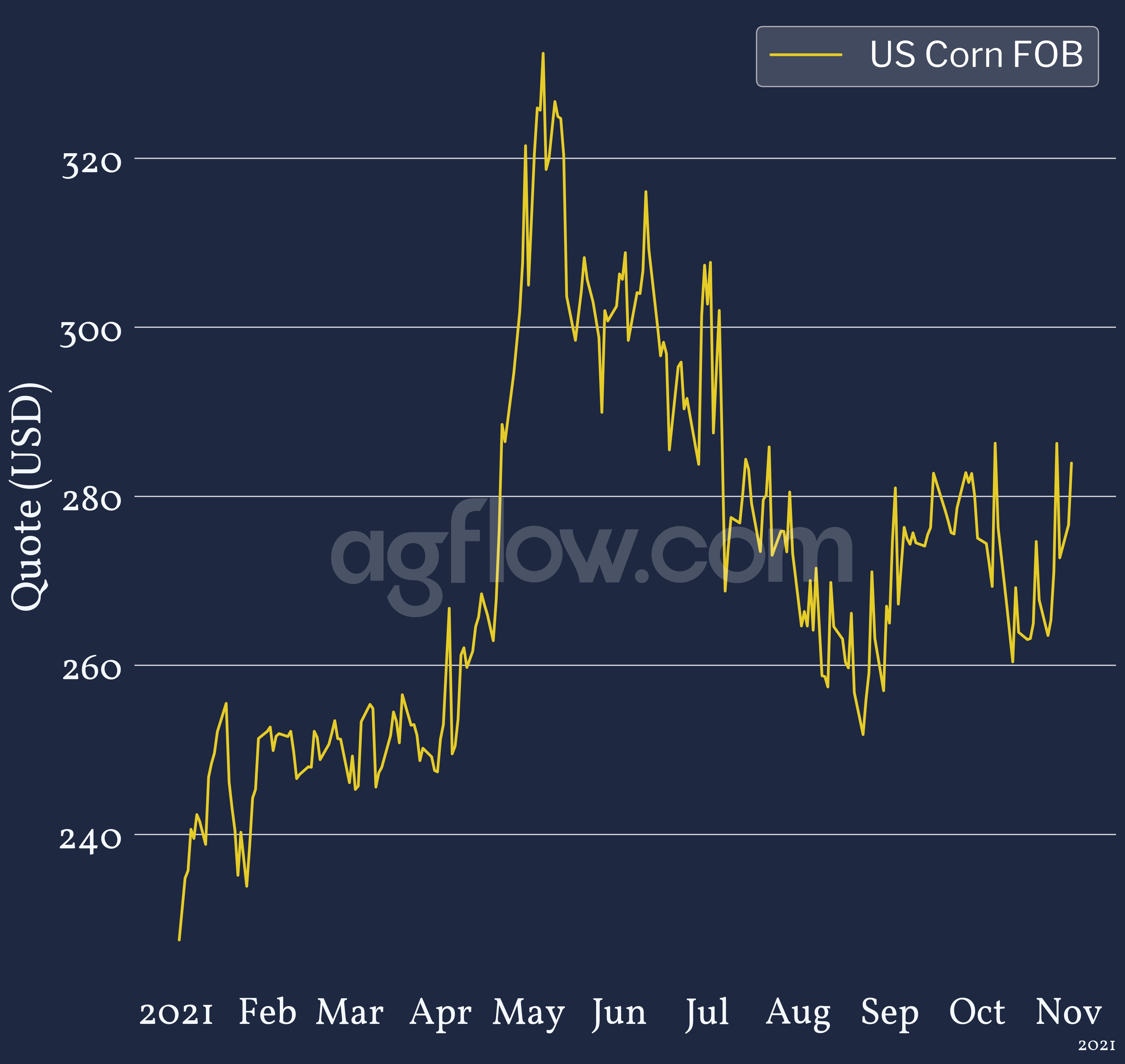 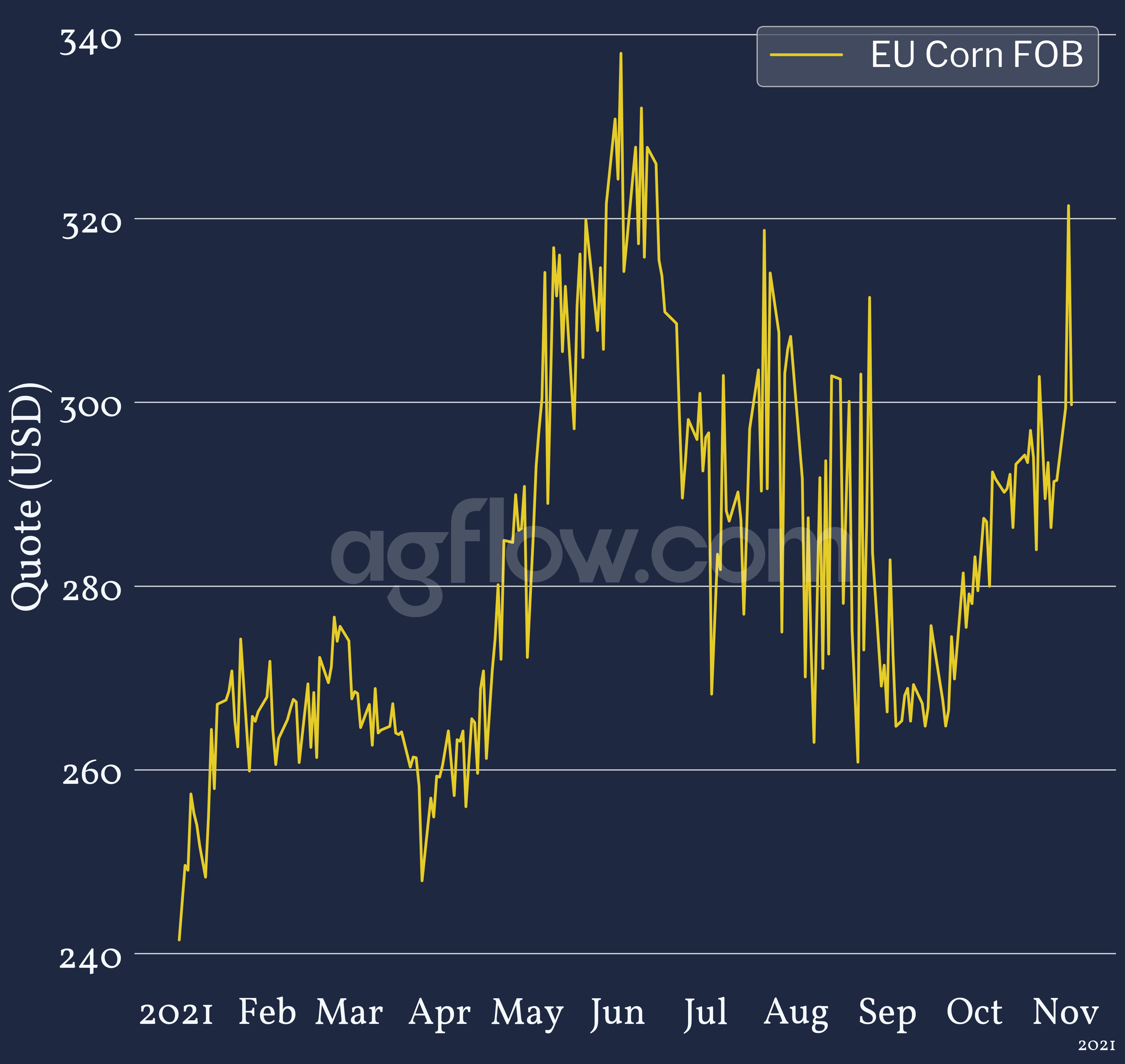 The FOB spot prices for both US and EU Corn, displayed in figure 2, rose rapidly in May/June 2021 due to the adverse weather conditions in both regions. The wide prices’ amplitude in plot 2 also showcases how this uncertainty drove prices as European regions encountered different crop conditions.

Along with a challenging supply in the EU and the most significant crop recorded in the US, China’s 2021/22 Corn crop is also important to track. 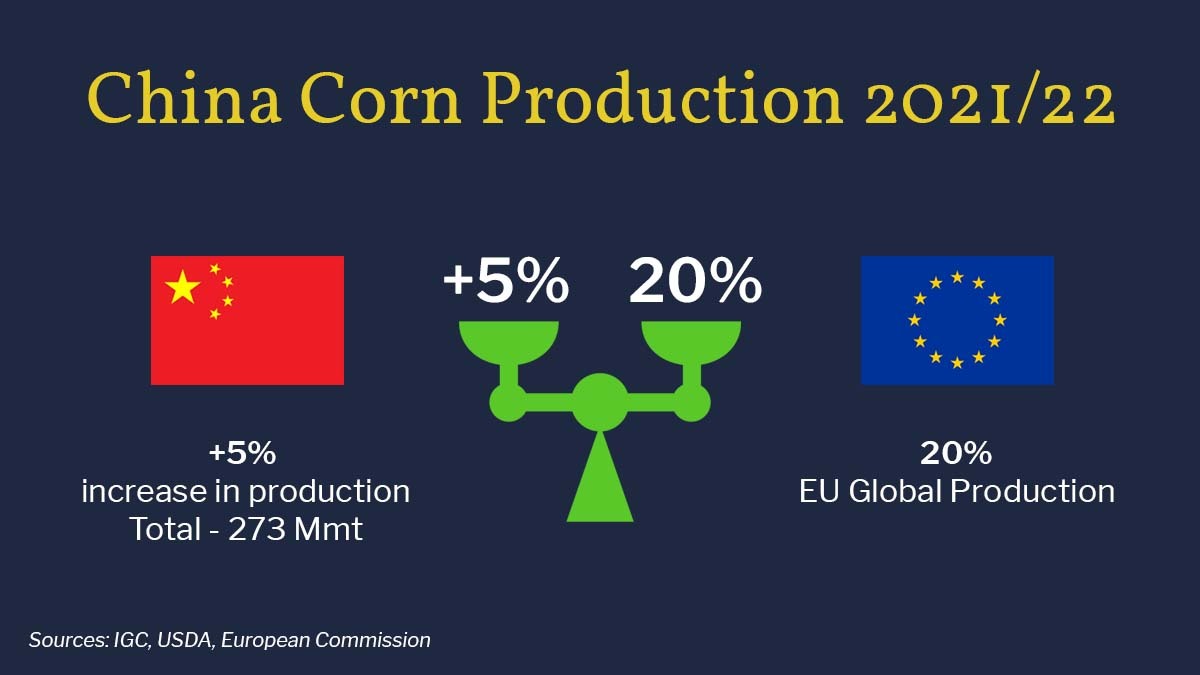 China’s Corn crop production estimates (sources: IGC, USDA) forecast a record Corn crop in 2021/22. Compared to 2020/21, this is an increase of between 9.3 to 12 Mmt or the equivalent of 14 to 18% of the estimated EU production. Like the EU, China endured large floods during the crop growth period, which reduced the total production throughout the months, and raised concerns about domestic Corn quality. Thus, despite the exceptional crop production, the Chinese demand might still change in 2021/22.

Read also: Here is Why Turkey and Iran Grain Imports Surged in August 2021

Access 15k Corn & Corn Complex Monthly Cash Prices from the US, Brazil, and 22 Other Origins

How Is the Corn Market Demand Structured for the EU & the US?

The US and EU Corn markets can rely on solid export pipelines globally, including China. However, they are facing intense competition from other origins. The US particularly depends on China as well. Indeed, China’s pork herds have been recovering from the Swine Flu epidemic, which decimated the herds’ headcount. As such, an essential share of its agricultural products imports was dedicated to animal feed, which helped boost US Corn sales in 2020/21. 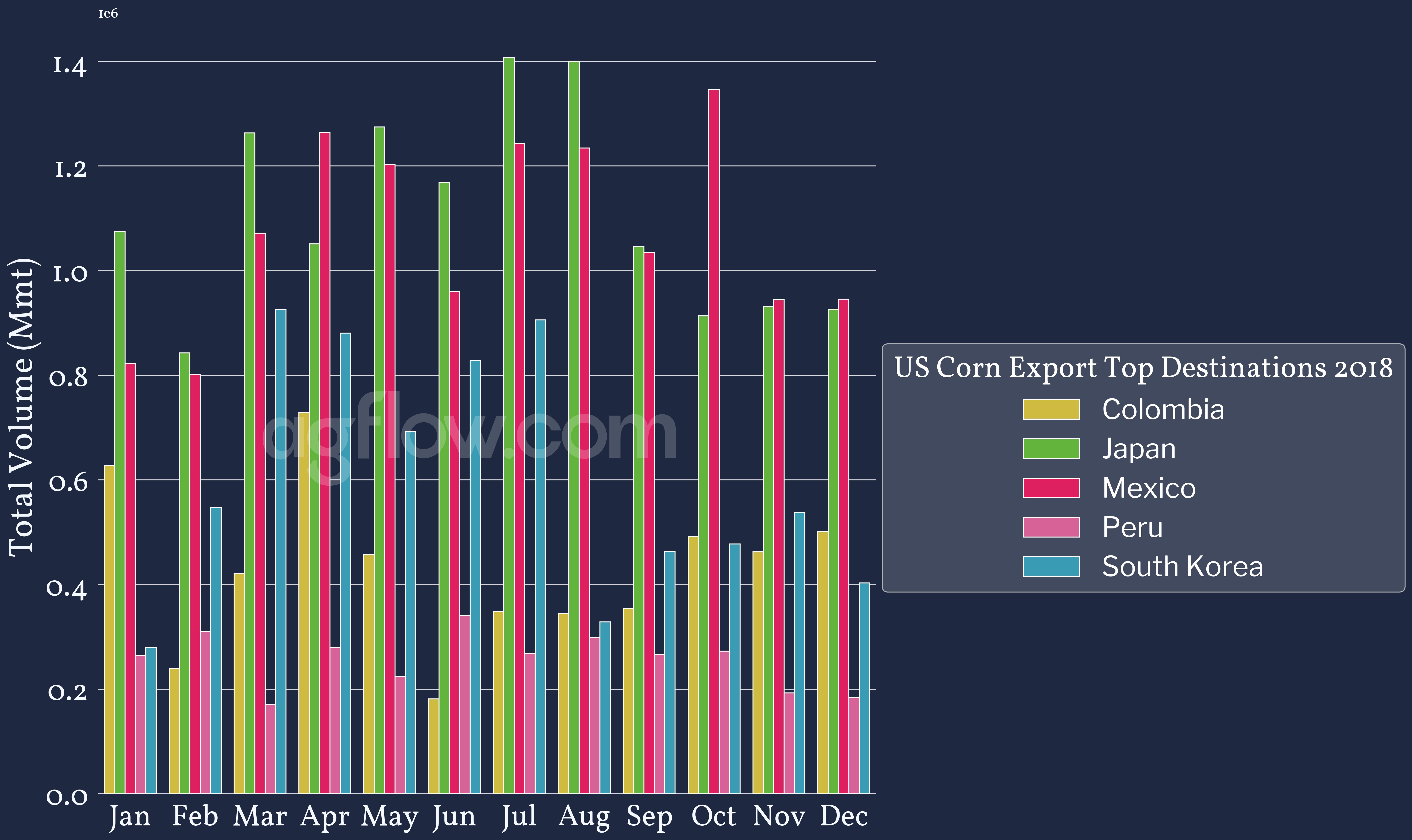 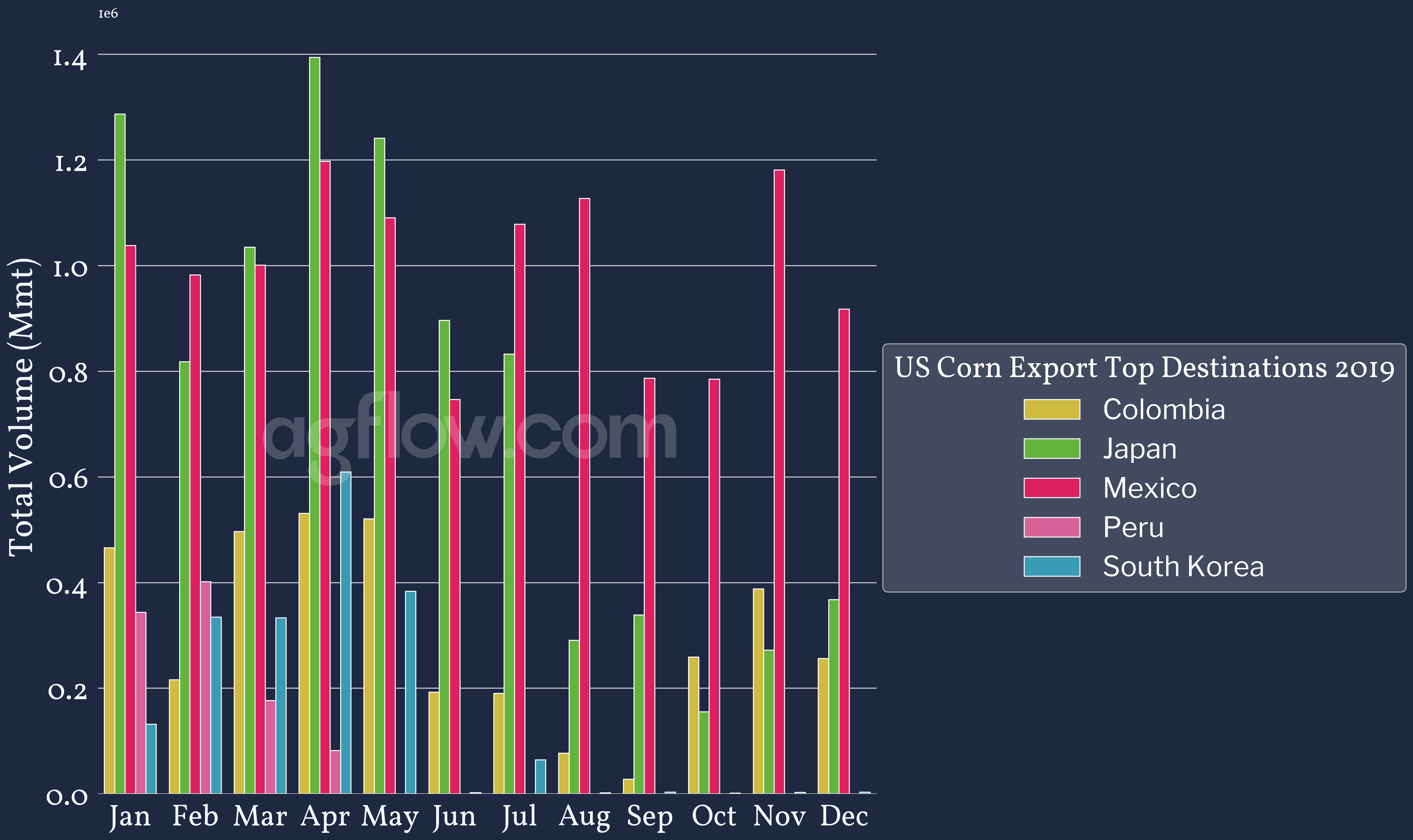 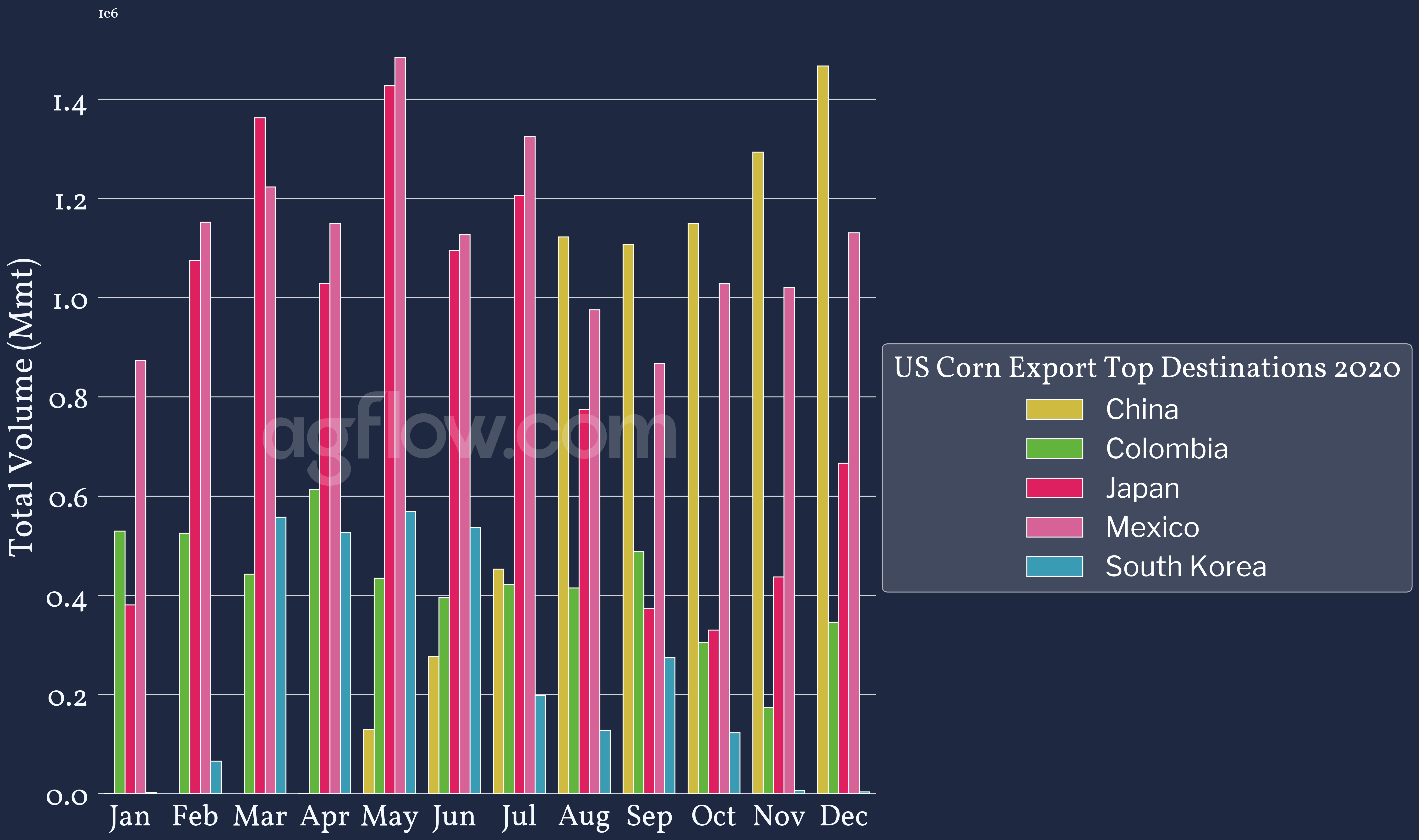 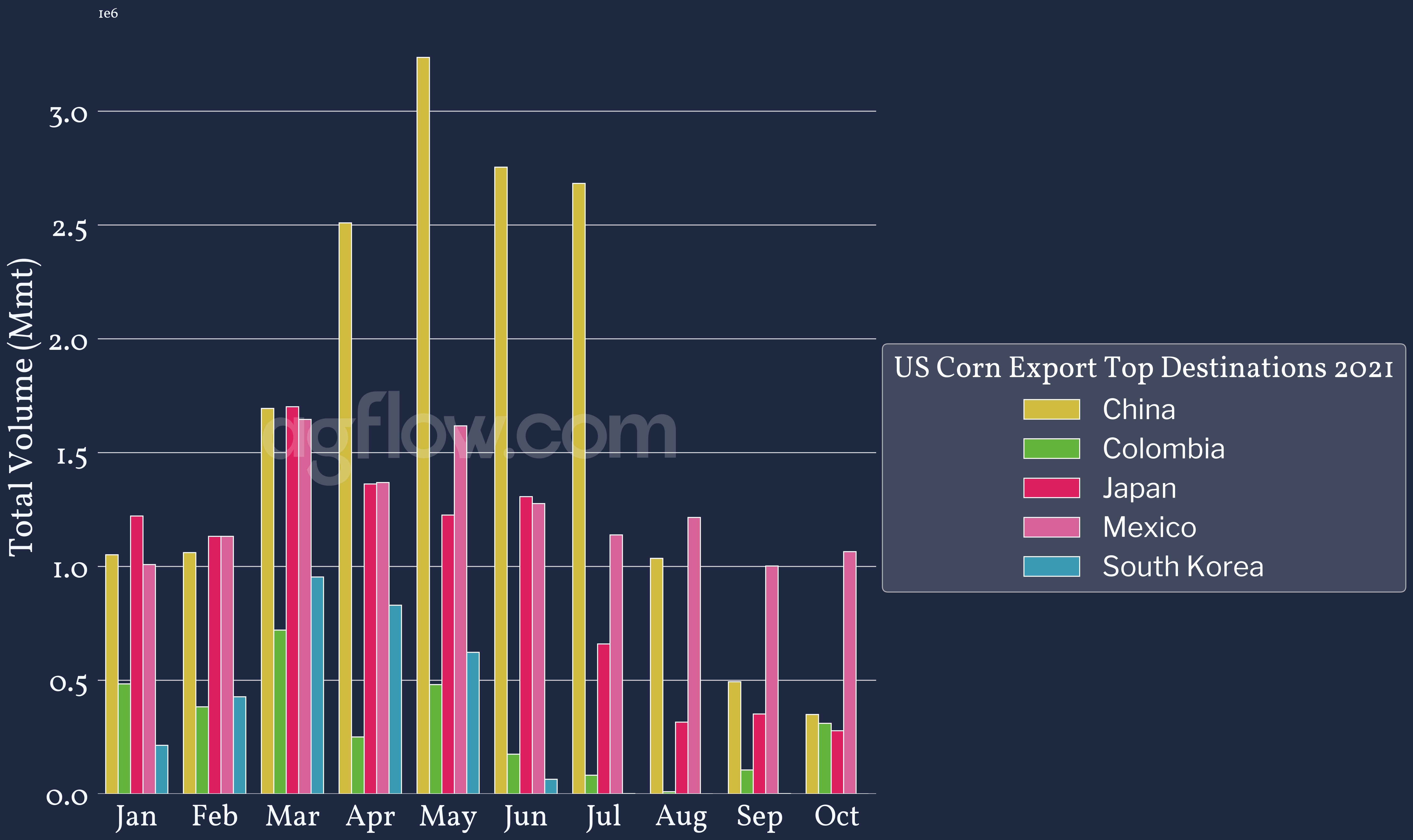 US Corn top destinations displayed in Figure 3 show that China has only become a top destination since 2020. By 2021, it has become the single largest importer of US Corn, ahead of Mexico. Additionally, the competitive pricing and the Phase 1 deal struck between China and the US allow the US to retain a competitive edge over its competitors (S&P Platts). Nonetheless, the US also suffered from deep logistics issues in the Gulf area, which prevented exports as well as fertilizer inputs for the Corn crop (Farm Policy News Illinois), thereby profiting Argentina Feed Corn exports. Nonetheless, the US can count on its most robust pipeline with Mexico, which recently confirmed its demand for US GMO Corn, as the country is limiting the share of GMO products in its carry (Brownfield News). 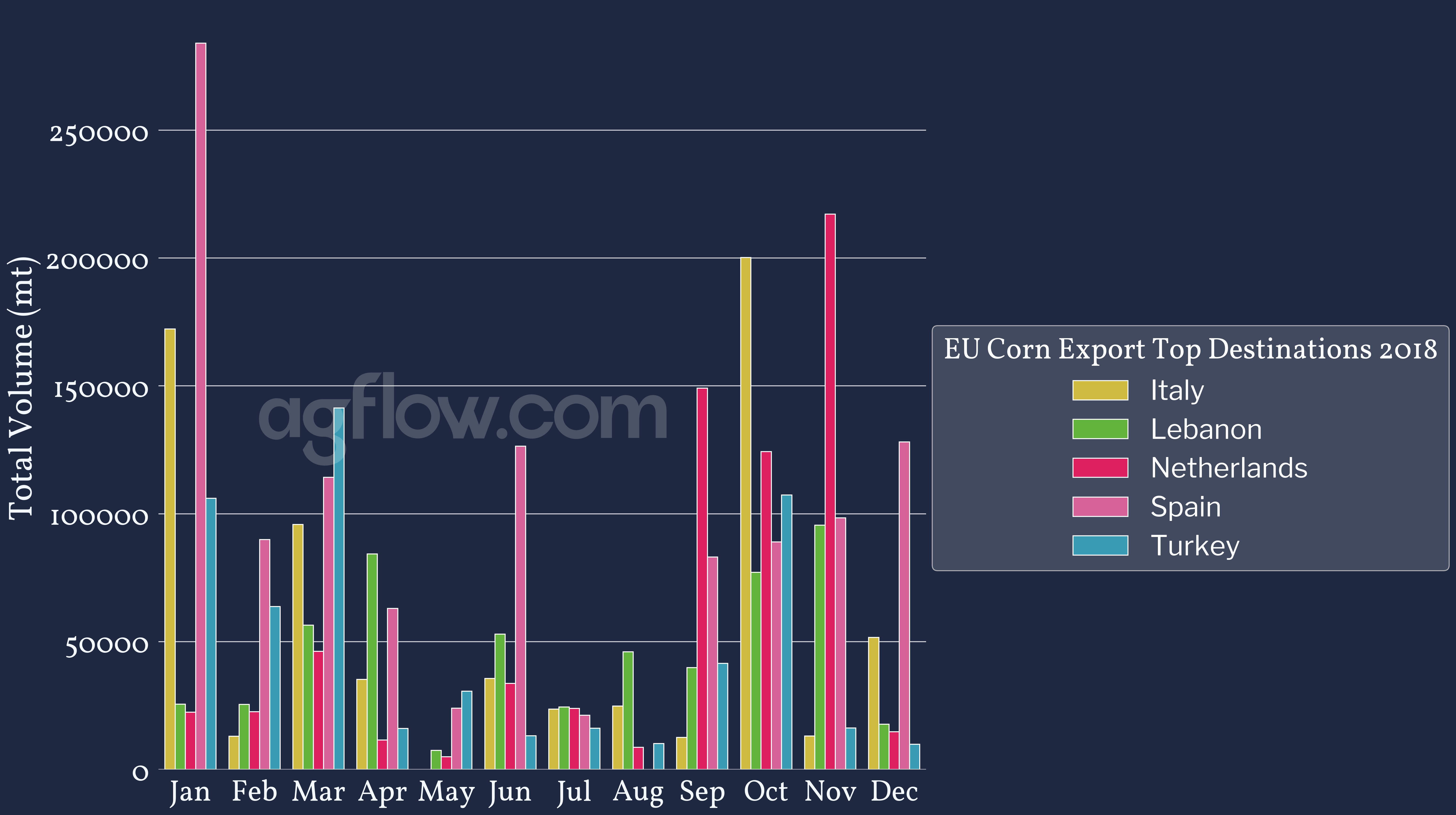 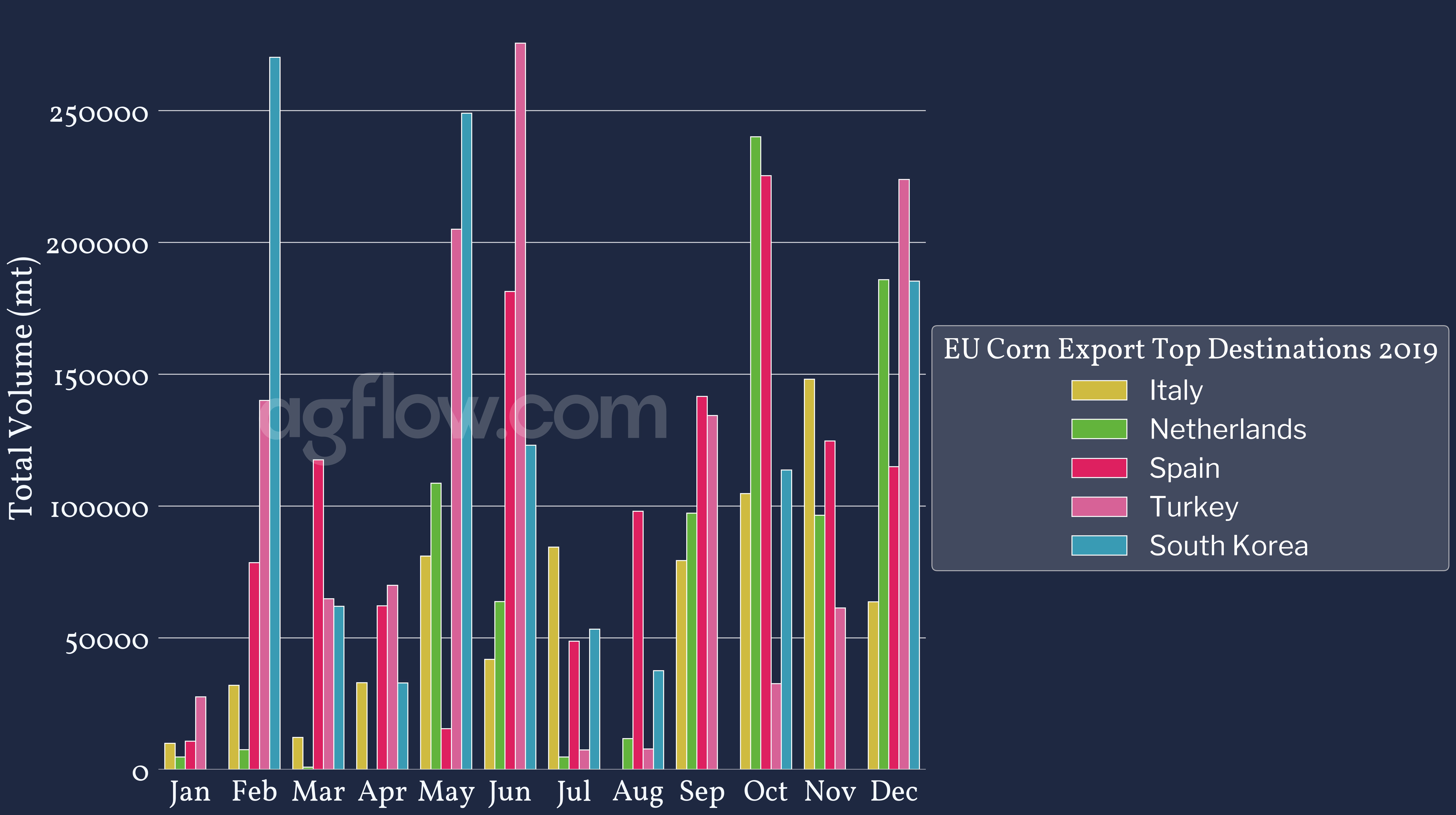 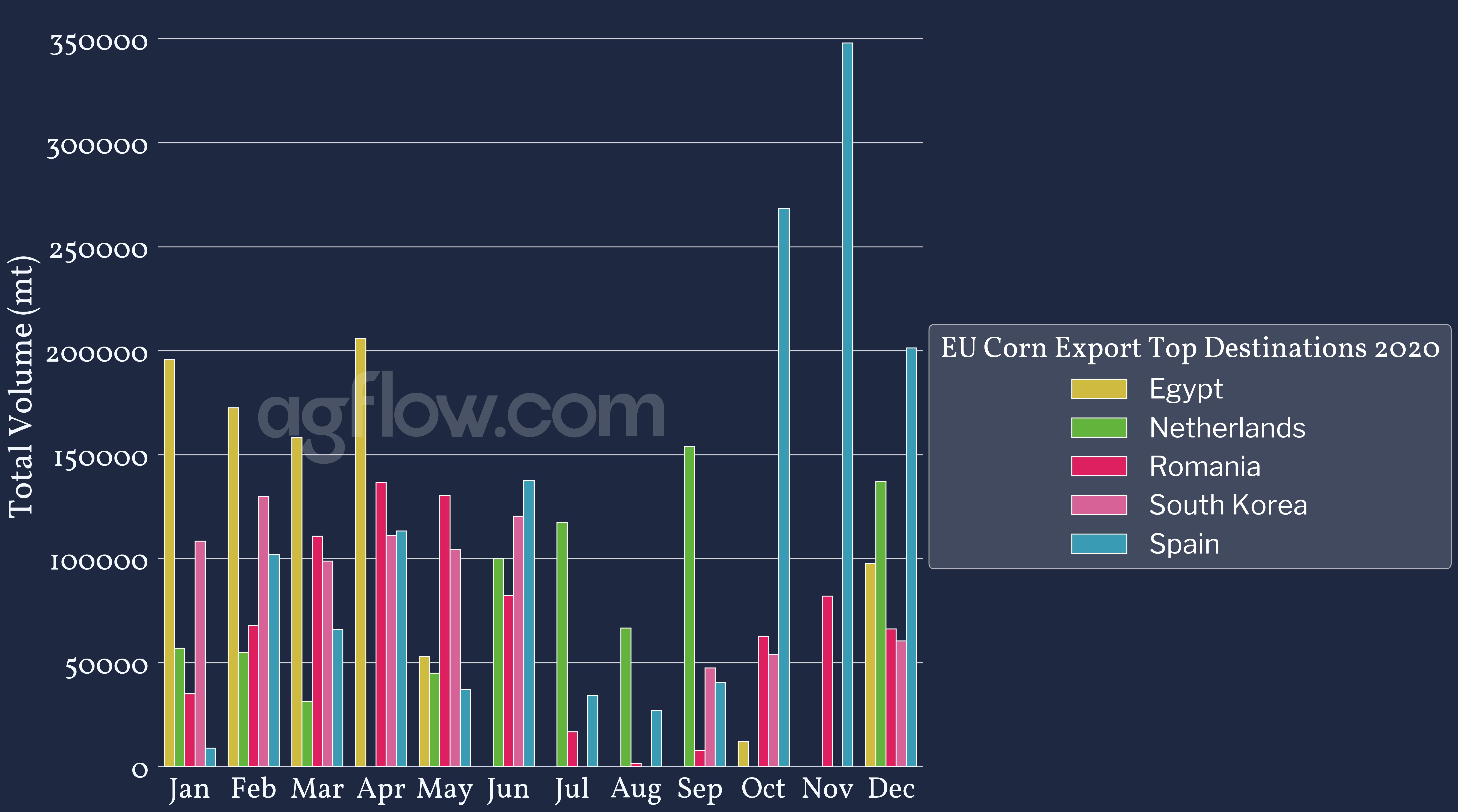 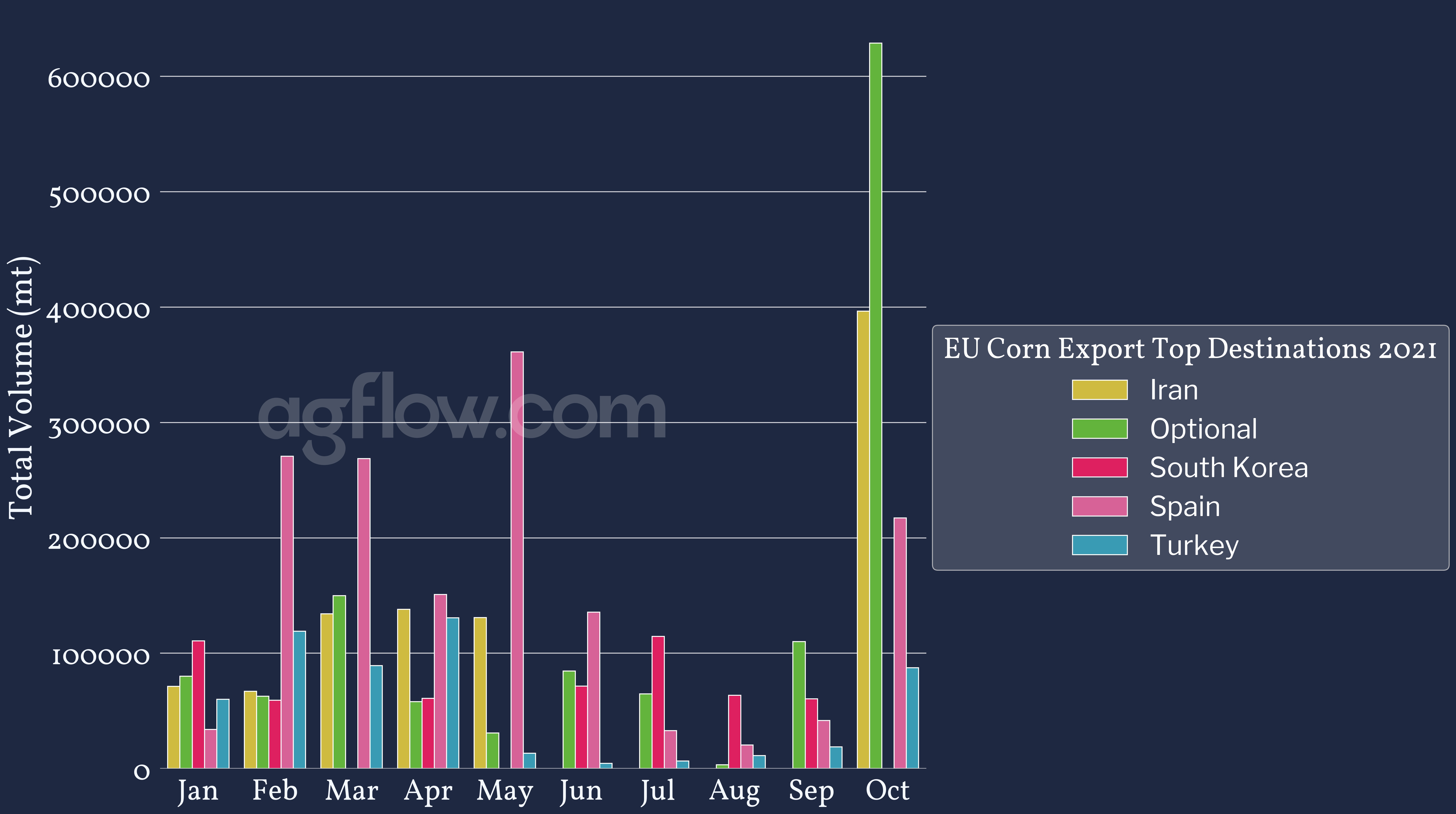 EU Corn exports are principally turned towards the internal EU market from 2018 until 2020, where three of the five top export destinations were in the EU. However, in 2021, at least three of those top five destinations were outside the EU. While Turkey and South Korea are solid pipelines, Iran imports are a consequence of the domestic supply difficulties and the increased consumption of feed products due to increasing its livestock production. However, the EU faces intense competition from Ukraine in Turkey and the countries surrounding the Mediterranean Sea. Moreover, the Iranian imports were probably a one-off event, and the country will likely not retain its status as a top destination.

Track Corn Shipments From the US & EU
to 167 Port Destinations

The US and EU Corn markets faced challenging weather conditions, leading to a mixed crop in the EU and an all-time record US Corn crop production thanks to better conditions in late Q3. These difficulties also contributed to volatile prices and a bull market as production estimates changed throughout the months.

The US Corn market has relied heavily on its exports to China since 2020, thanks to a renewed demand for Feed products and the Phase 1 deal between both governments. Additionally, it relies heavily on Mexico, which remains its most robust export destination. On the other hand, the EU depended predominantly on its internal market until 2021. However, in 2021, Iran represents an essential part of the EU Corn exports due to growing livestock and poor domestic production.

However, while the US has a competitive edge over its competitors, Chinese imports will likely be lower in 2021/22 (Farmprogress.com), which will impact US Corn exports heavily, and will reflect on prices. The EU Corn exports will also depend on how competitive its products are against Ukraine Corn, which also produced a record crop, limiting EU exports in 2022.

Read also: Here’s Why US Agricultural Exports Have Decreased in August 2021 v. August 2020

3 Things You Should Track Coming Into 2022

La Niña will have an impact on Brazil and Argentina Corn coming into 2022. Following the weather pattern will be necessary to prepare for the US Corn competition.

Black Sea Wheat and the Russian export tax lift the Corn market and the strong demand from Mediterranean sea countries. The EU could see more demand if it were to be at a discount to Ukraine Corn.

China’s pork margins are currently too thin due to slow demand to absorb the large stocks. The government is already acting to reduce the pork herds’ sizes while increasing the poultry sector to balance the market. The demand for feed Corn will probably not be as strong then, and monitoring trade flows in early 2022 and livestock reports will reveal signs of whether China in 2022 will import more or less than in 2021.

You Missed the analysis? Jump back to the start