Soriano, Rio Negro, and Colonia are clearly the regions with the most grain production in Uruguay. This is due to the high soil productivity in these places. In Colonia, crop fields tend to be smaller, and in Rio Negro and Soriano there are more options for large-scale farming.

The USDA projects yields for the MY 2022/2023 at 3.72 tons per hectare, 7-9 percent lower than the yields of the previous two crop seasons. Weather is forecast to normalize after two La Nina seasons, which in this region tends to be drier than usual. However, farmers in MY 2022/2023 are expected to proceed somewhat defensively due to high input prices, especially fertilizers. At current prices, progressive farmers indicate that their breakeven yield is approximately 3.5 tons per hectare on owned land and roughly 4.0 tons on rented land, the country’s projected average yield.

While farmers want to take advantage of current high world prices, especially coming from two good crop seasons, the high cost and reduced availability of fertilizers and some crop protection products could negatively affect yield in the coming year. Uruguay imports all of its fertilizers, and it could be short of phosphorus and potassium for the winter crop season. Prices often mirror those of Argentina, the region’s largest producer, and exporter. However, these prices are distorted due to policies that limit exports.

The Wheat area in MY 2022/2023 would be the highest of the past six years at 255,000 hectares, but less than half of the record high of 590,000 hectares in MY 2011/2012. The growth of canola area, due to its good returns and convenient crop rotation, and Barley took a lot of area from Wheat. Farmers’ first choice of winter crops this year is canola, followed by Barley which projected reasonable prices and demand for malt and feed Barley. The total Barley area in MY 2021/2022 was 224,000 hectares, with a production of 920,000 tons. Malting Barley accounted for 165,000 hectares, while the balance was planted for feed for exports and domestic consumption. Early projections indicate that the Barley area could remain unchanged or grow marginally in MY 2022/2023.

Wheat domestic demand in MY 2022/2023 is projected at 440,000 tons, in line with the previous two years. Despite increases in the domestic price of flour, reflecting higher world Wheat prices due to the war in Ukraine, flour consumption is relatively inelastic. 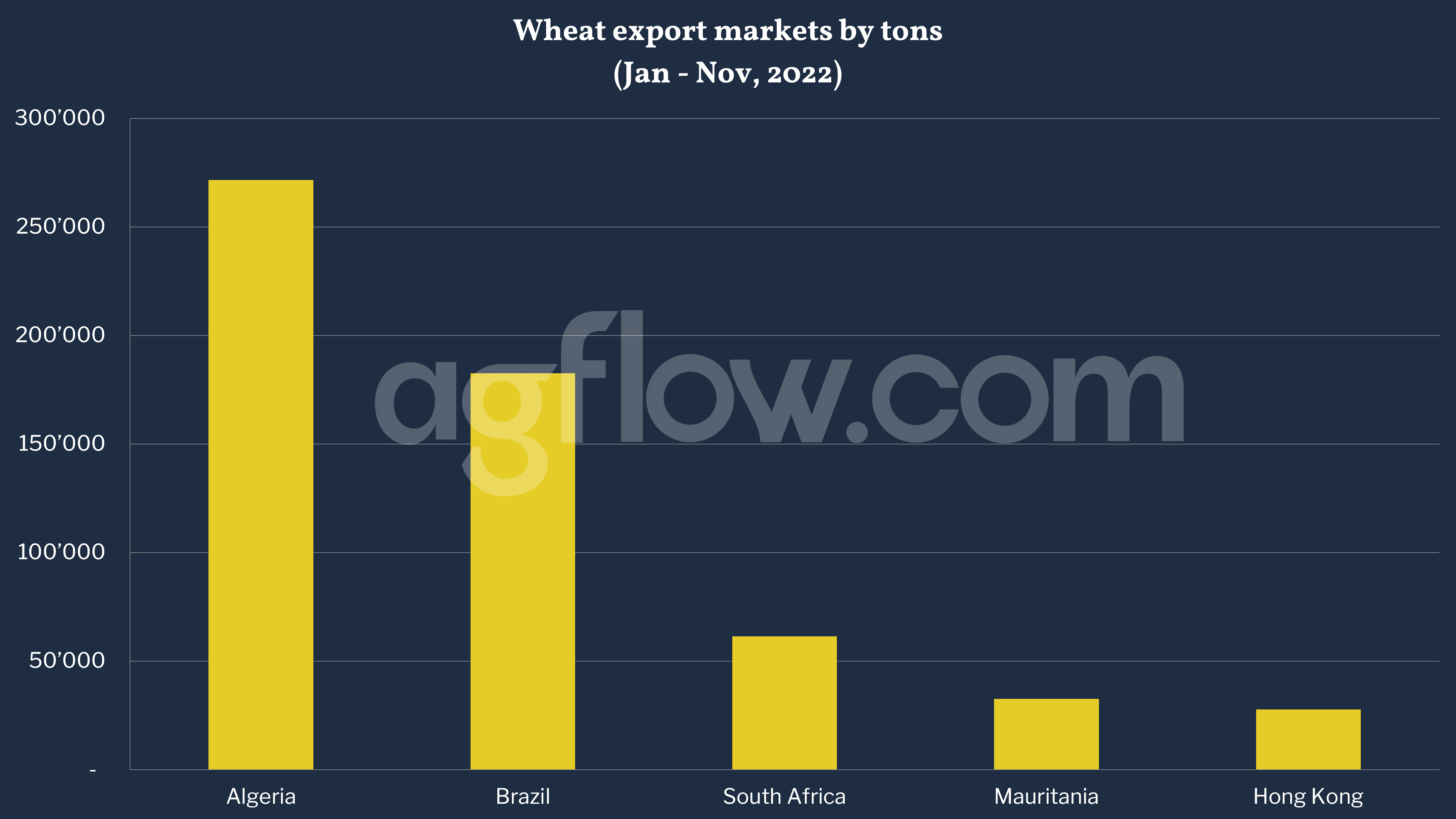 Wheat exports in MY 2022/2023 are forecast at 520,000 tons, somewhat lower than in the previous two crop seasons as a result of a projected smaller output and reduced stocks. In the past few crop seasons, exports have accounted for roughly 55-60 percent of total Uruguayan Wheat output. Algeria and Brazil are expected to continue to be the leading destinations for Uruguayan Wheat in MY 2022/2023.

According to the AgFlow data, in volume, Algeria led Uruguayan Wheat export market with 271,650 metric tons in Jan-Nov 2022, followed by Brazil (182,600 metric tons), and South Africa (61,400 metric tons). The other importers were Mauritania, Hong Kong, Chile, and Vietnam.

Read also : Wheat Prices Are Falling In Russia Due to the Replenished Stocks