Soybean Exports as a Second Priority for the U.S.?

U.S. Soybean domestic consumption reached 63.2 Mmt in MY 2021/22, including 11.29 Mmt of Soybean Oil and 43.93 Mmt of Soybean Meal. U.S. Soybean Oil and Meal productions have been growing gradually since 2018, increasing by 1 Mmt and 3 Mmt, respectively, between 2018 & 2022 and reaching 47 Mmt and 12 Mmt in 2021/22. Thus, ~95% of Soybean Oil and ~93% of Soybean Meal produced are reserved for domestic consumption. Total Soybean production is less consistent. Indeed, in 2019/2020, due to unfavorable weather conditions, total production decreased by 24 Mmt YoY. And while Soybean Oil production remained constant YoY and Soybean Meal increased slightly by 2 Mmt YoY, the production of non_crushed Soybean decreased by 31 Mmt YoY. Therefore, the U.S. mainly secures its market demand for Soybeans and derivatives by crushing the volumes needed and then only exporting the surplus. 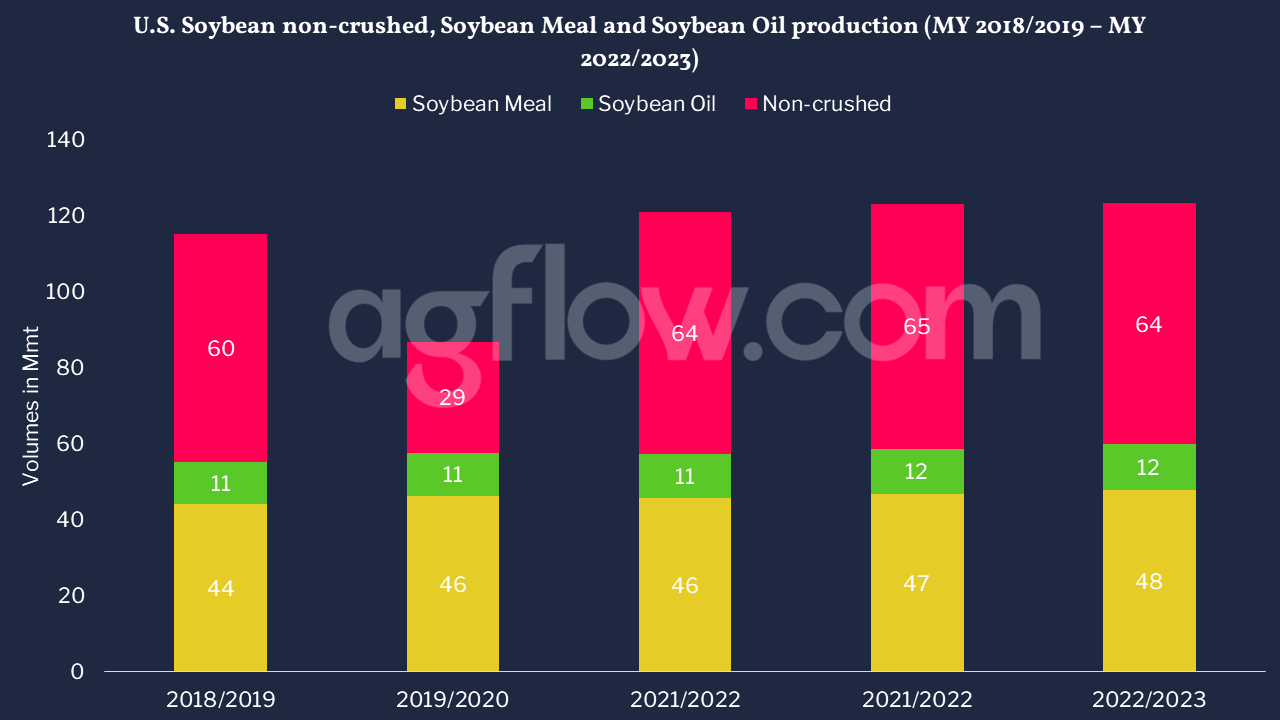 Track Soybean, Soybean Meal and Soybean Oil Production in Up to 82 Origins

Read also:What Should You Expect From The US Soybean Crop in 2021/22?

The U.S. exports an average of 55.25 Mmt of Soybeans yearly, including 12.5 Mmt of Soybean Meal and 959kmt of Soybean Oil. U.S. Soybean exports increased by 11 Mmt between MY 2018/2019 and 2021/2022. However, in MY 2021/2022, exports declined by 3 Mmt YoY to 56 Mmt due to China’s imports decreasing by 5 Mmt YoY. Furthermore, the USDA estimates exports will decrease by 950 kmt YoY in MY 2022/2023 even if production increases by 1.9 Mmt, due partly to the domestic consumption increase expectations by 1.29 Mmt YoY. Nevertheless, since the harvest began in Sep 2022 for MY 2022/2023, Sep exports increased by 367 kmt YoY. Historically, export volumes peak in Q4, therefore monitoring exports during this period will show whether the trend set in Sep will continue. 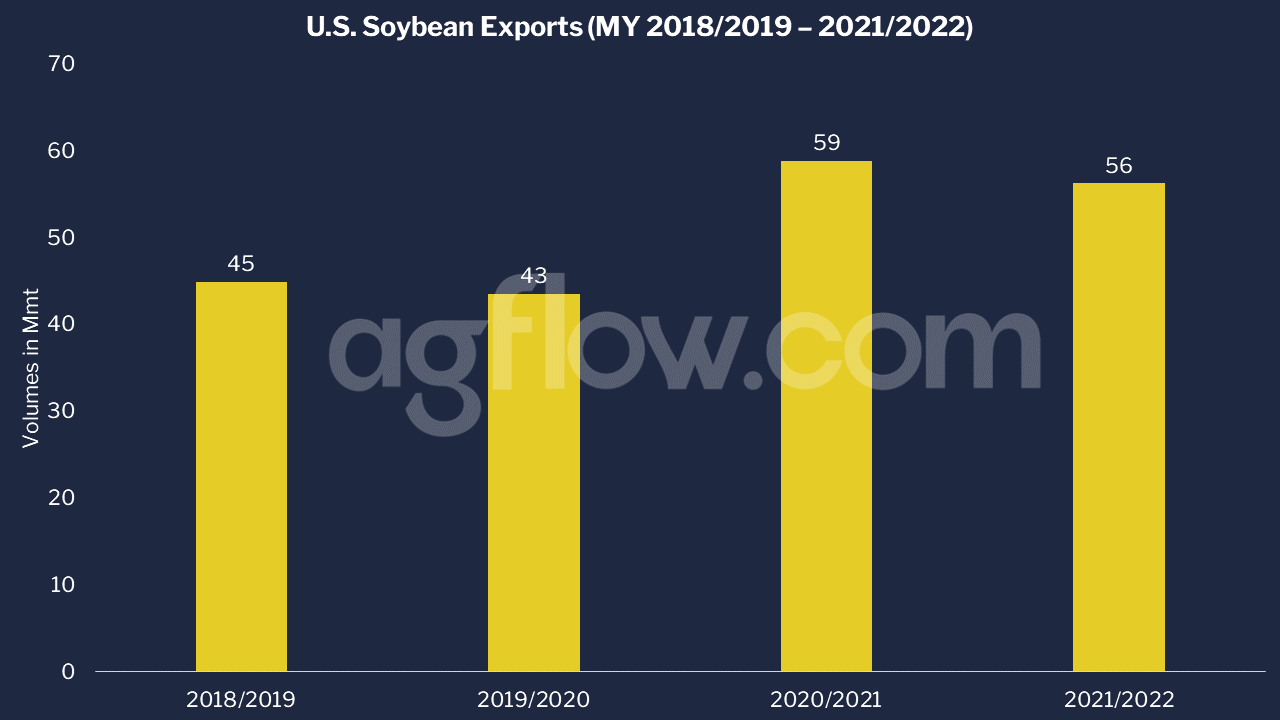 Track Monthly Soybean Exports From Up to 43 Origins since 2017

Read also: German Soybeans: Via Holland or Not

The U.S. Offsets Loss of Soybean Exports to China with Exports to Mexico, Japan & Egypt

The main U.S. Soybean export market is China. However, exports declined by 5 Mmt YoY in MY 2021/2022, due to the large Brazil Soybean supply and political tensions. However, the U.S. benefits from other strong export pipelines. Indeed, Mexico ranks as the second top destination for the U.S. In order to supply its domestic market with 6 Mmt of Soybean in MY2021/2022, Mexico increased imports from the U.S. by 1 Mmt YoY. Moreover, the U.S. benefits from strong commercial relationships with Japan & Egypt, both increasing Soybean imports from the U.S. by 0.2 Mmt and 1 Mmt YoY, respectively. All in all, the U.S. exported 3 Mmt less of Soybean YoY, partially compensating for the 5 Mmt China loss by strengthening its other markets. 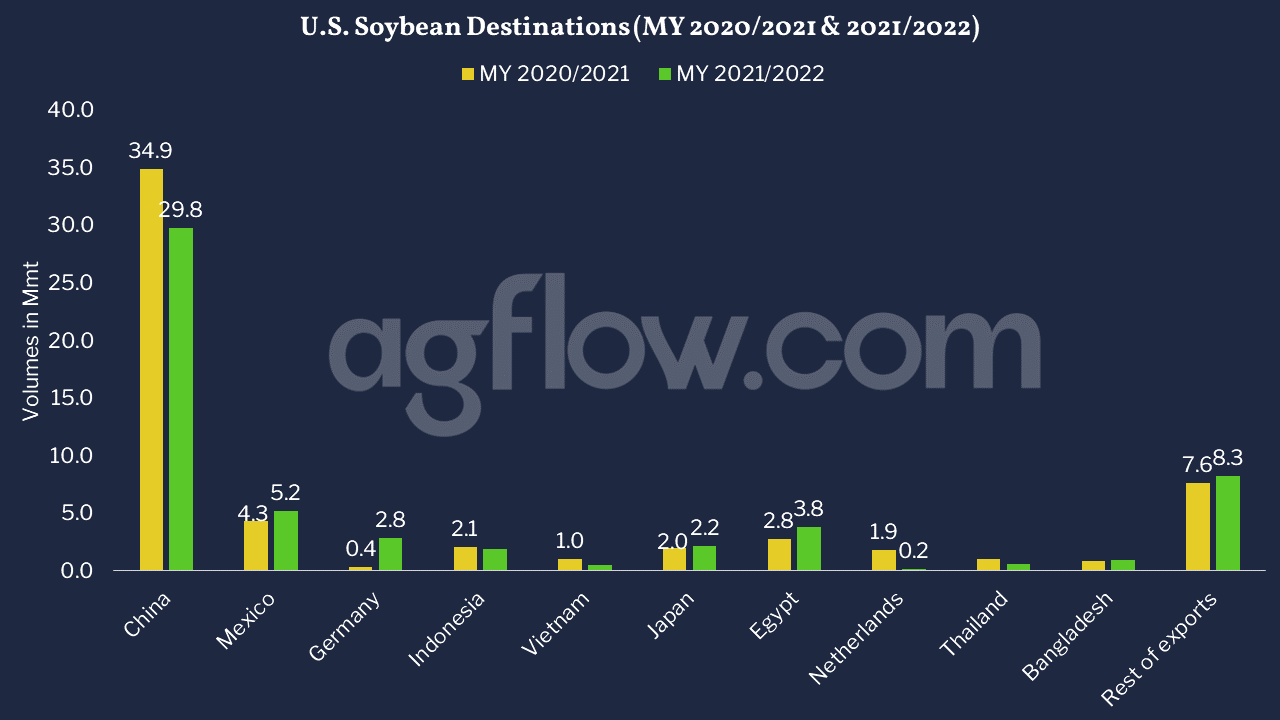 Track U.S. Soybean Exports to Up to 74 Destinations Since 2017

Will the U.S. CFR Price Indications Continue to Increase in 22/23?

U.S. Soybean exports usually peak in Q4, as the harvest begins in Sep. At the same time, CFR prices decrease to their lowest point. For the MY 2020/2021 and 2021/2022, exports reached a similar peak of 11 Mmt in Oct. However, at the same time, CFR price indications increased by USD 113/mt YoY. And during the seasonal rally before the harvest starts, U.S. CFR indications peaked at USD 762/mt in Jul 2021 increasing by USD 47/mt YoY. At the start of this MY 22/23 CFR price reached a maximum of USD 716/mt in Sep 2022, which is USD 60/mt higher YoY. In Oct 2022, prices were USD 50/mt higher YoY. Thus it seems that prices will remain higher YoY. As prices will reach their minimum in Jan 2023, will the price delta remain large? 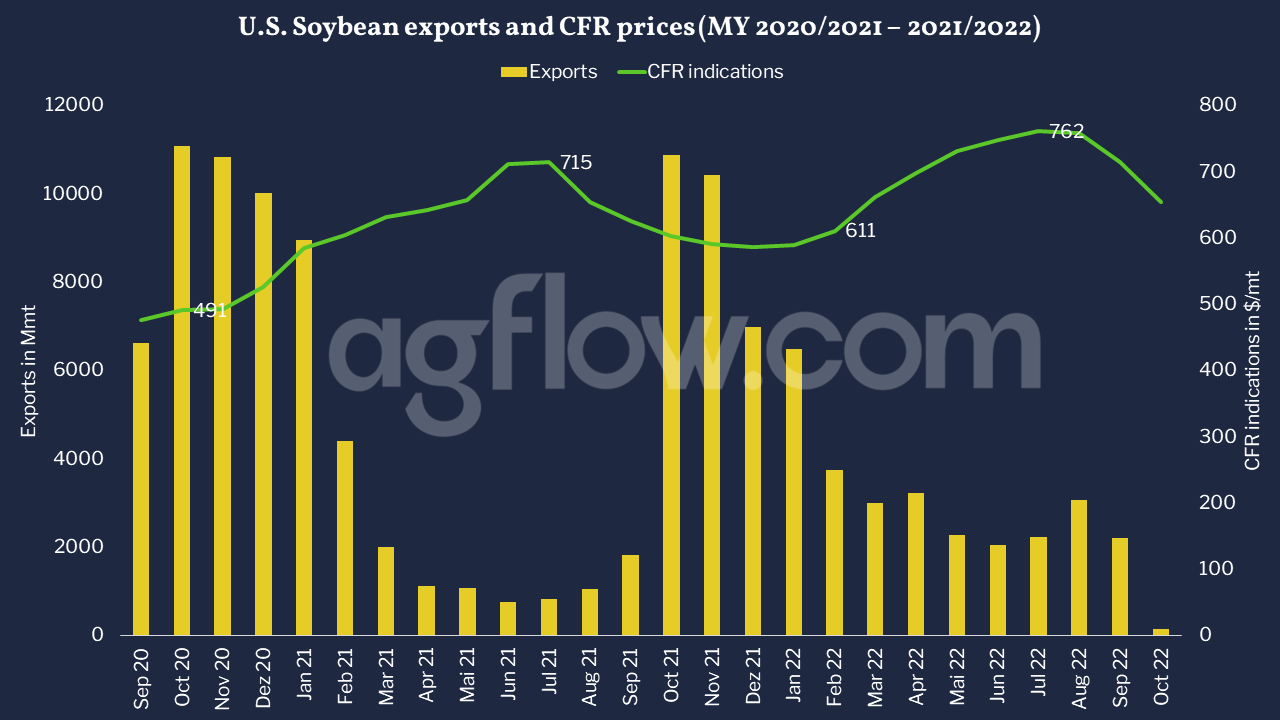 Access + 1k  Daily Soybean CFR indications to Up to 24 Destinations

The U.S. is a major producer of Soybeans. Half of the annual production is used for crushing and domestic consumption. The production of Soybean by-products has remained constant over the years, regardless of the evolution of gross production. Thus, U.S. Soybean production covers mainly domestic needs for Soybean Meal and Oil. In contrast, annual export volumes tend to vary depending on weather conditions and domestic demand.

China remains the top destination for U.S. Soybean exports although the country relies first on the Brazilian Soybean supply. Meanwhile, Mexico – ranking second for U.S. exports – relies mainly on the U.S. supply to cover the larger part of its domestic consumption – reaching over 78% in 21/22. As with Corn and other commodities, the USMCA is one of the drivers of the dominant U.S. presence in the Mexican market.

CFR prices for U.S. soybean exports fluctuate with the supply over the course of a year. . Prices usually begin to fall during the harvest season and reach their lowest level in Q4. They rise during the low supply season in June and July when export volumes are at their lowest. In 2022, they surged to USD 762/mt in July due to ramping inflation.

All in all, the USDA estimates that U.S. Soybean production will increase in the 2022/23 crop year. Yet exports will decline as domestic demand is expected to increase by 1.29 Mmt YoY.  And as expected, a lower supply is driving prices up to USD 60/mt in September 2022/2023 YoY. However, as tensions with China remain strong, the demand for the U.S. product could decrease, leading to more supply available and prices decreasing.