Malaysian exports of Palm Oil and other Palm Oil-based products (POPP) amounted to 11.5 million tons in H1, up 3% y-o-y. Higher Palm Oil product prices had boosted POPP’s export revenue by 55% to RM67.5 billion in the H1, from RM43.5 billion in the same period in 2021.

Palm oil exports alone increased by 2% to 7.2 million tons, accounting for 63% of the total POPP, while the Palm Oil export revenue increased significantly by 54.5% y-o-y to RM44.6 billion. Higher palm oil prices during the period were influenced by rising global Soybean Oil prices and strengthening Brent Crude Oil prices in the world market.

Immediately after the industry started showing signs of recovery this year, the Russia-Ukrainian war disrupted the global Sunflower Oil supply chain, thus driving demand for Palm Oil as an alternative to Sunflower Oil. Moreover, Indonesia’s ban on Palm Oil exports on April 28 put further pressure on demand for Palm Oil, which pushed up Palm Oil prices and resulted in some contraction in demand in some markets.

Palm Oil prices, however, began to decline faster when Indonesia lifted the ban on May 23. The price of Crude Palm Oil (CPO) is expected to average RM5,300 per ton in the H1 of 2022, lower than the first half. This is due to higher global vegetable oil supply expectations, increasing CPO production in the third quarter, and lower Palm Oil exports.

CPO production this year is projected to increase slightly by 2% due to expectations of an increase in mature crop areas and favorable weather conditions. In H2, the country forecasts to produce 10.2 million tons of CPO while anticipating the closing stock of Palm Oil in 2022 to be at 1.9 million tons.

On average, 90% of Malaysia’s Palm Oil production in the H2 will be exported due to expectations of stronger demand for Palm Oil from major importing countries.

According to the AgFlow data, India is leading their export market by 42,000 tons in July shipment, followed by the Netherlands, South Africa, Tanzania, Spain, Japan, and South Korea. 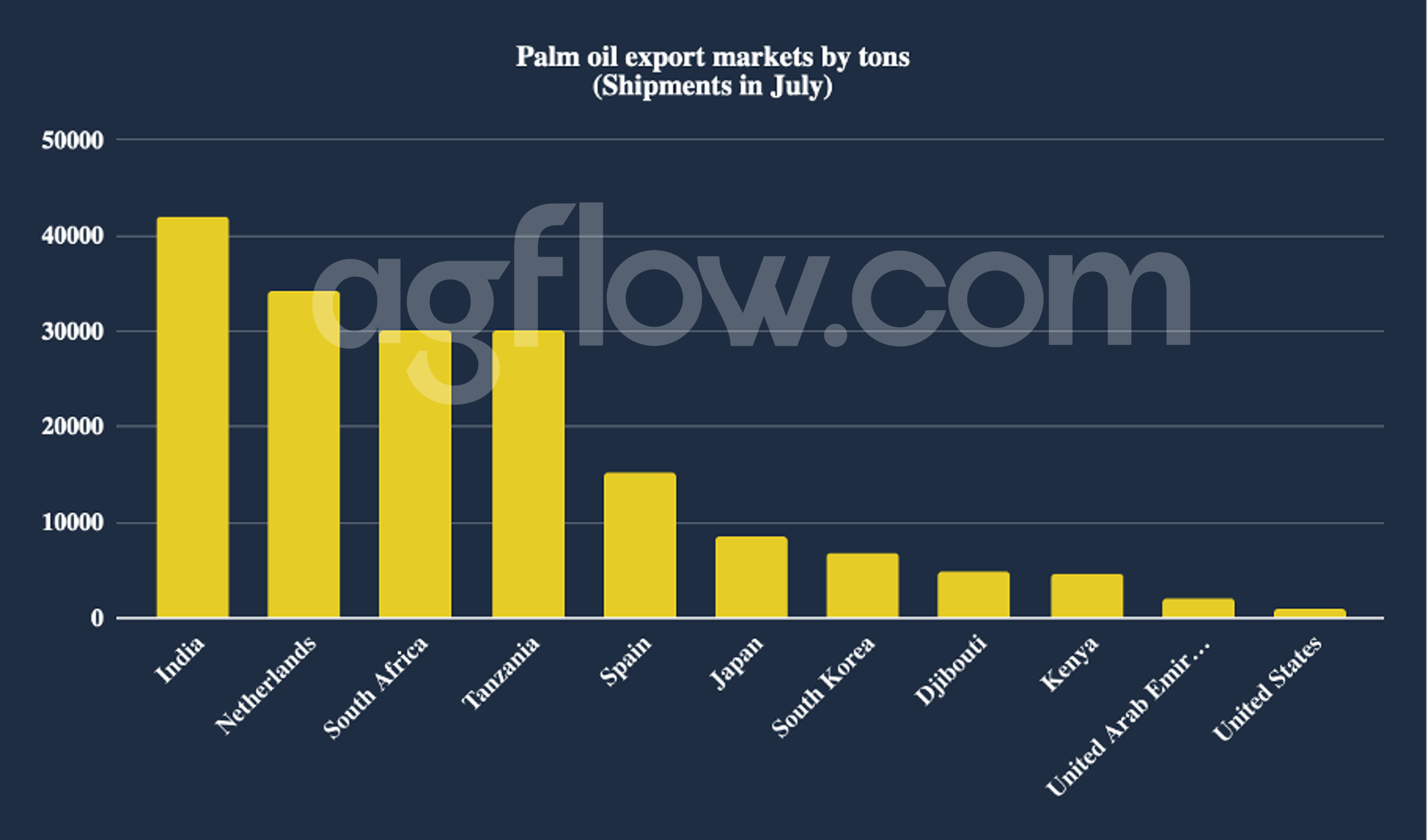 According to the Malaysian Palm Oil Board (MPOB), labor shortages are still one of the challenges being addressed by industry stakeholders. The Malaysian Plantation Owners Association, in a statement issued last month, estimated that the oil palm industry was short of 120,000 workers.

The MPOB statistics show a decrease in total employment in the plantation sector by 6% in May 2022 compared to the same period of 2021. The Board said if the problem of manpower shortage is not addressed wisely, it would affect the competitiveness of the Malaysian Oil palm plantation sector.

Almost all categories of farm work experienced a decline with the highest rate: field workers (fertilizing, weeding, and pruning) as well as harvesting workers and fresh fruit bunch collectors with a decline of 9% and 7%, respectively.

The labor force situation in the plantation sector has caused CPO production to be much lower than the usual business scenario, which has the potential to produce almost 20 million tons, said Ahmad Parveez, Director General of the MPOB.

Expected CPO price weakness coupled with higher operating costs following the increase in the minimum wage in Malaysia to RM1,500 per month effective May 1, 2022, the higher fertilizer cost and the prosperous tax will lead to lower profit margins unless productivity improves.

Read also : The Impact of The Indonesia Palm Oil Ban