The EU: Dutch Ports Take More Soybeans Than Others

Soybean production in the European Union is still tiny compared to global output but showed significant growth in recent years. Output more than doubled during the last ten years, from 1.26 million tons in 2010 to 2.7 million tons in 2020. The top-5 producing countries – Italy, France, Romania, Croatia, and Austria – accounted for more than 80% of output in the EU in 2020. Production in the UK is too small to be reported in agricultural statistics.

According to AgFlow data, the EU imported 22.6 million tons of Soybeans in 2022 and January 2023. The Netherlands led others with 5.4 million tons, followed by Spain (4.1 million tons), Turkey (3.3 million tons), Germany (2.7 million tons), and Italy (2.2 million tons). Soybean, meal, and oil imports to the EU27+UK reached a combined 33.9 million tons in 2020. The top soy-producing countries, Brazil, Argentina, and the United States, accounted for 86% of these imports, with Brazil alone for almost half.

Soybean meal and Soybeans are the main traded soy products. Soybean oil plays, in comparison, a much smaller role and mostly comes from Central and Eastern European countries, including Ukraine, Russia, and Serbia. This can be explained by the demand for non-genetically modified (GM) Soybean oil for food products.

Soy exports from the EU27+UK only account for a small share of total available soy from imports and production. According to AgFlow data, the EU exported 1.6 million tons of Soybeans in 2022 and January 2023. Ukraine ranked first with 1.2 million tons, followed by Russia (118,517 tons), Romania (117,900 tons), and Spain (67,900 tons). In 2020, 1.31 million tons of Soybeans, Soybean meal, and Soybean oil were exported to non-EU destinations, with Morocco and Algeria as the most important trading partners and Soybean oil as the most important exported product. Soybean oil has taken up a comparatively large share in exports since 2013.

Overall, the EU27+UK trade balance for essential soy products shows little change over the ten years since 2011. There has been a slight decrease in Soybean meal and a concurrent increase in Soybean imports to the EU27+UK over the ten years to 2020. After crushing most of the Soybeans with meal and oil as critical products, the overall volume of soy products available for use does not suggest a sizable shift away from the predominantly South American soy imports to the region. 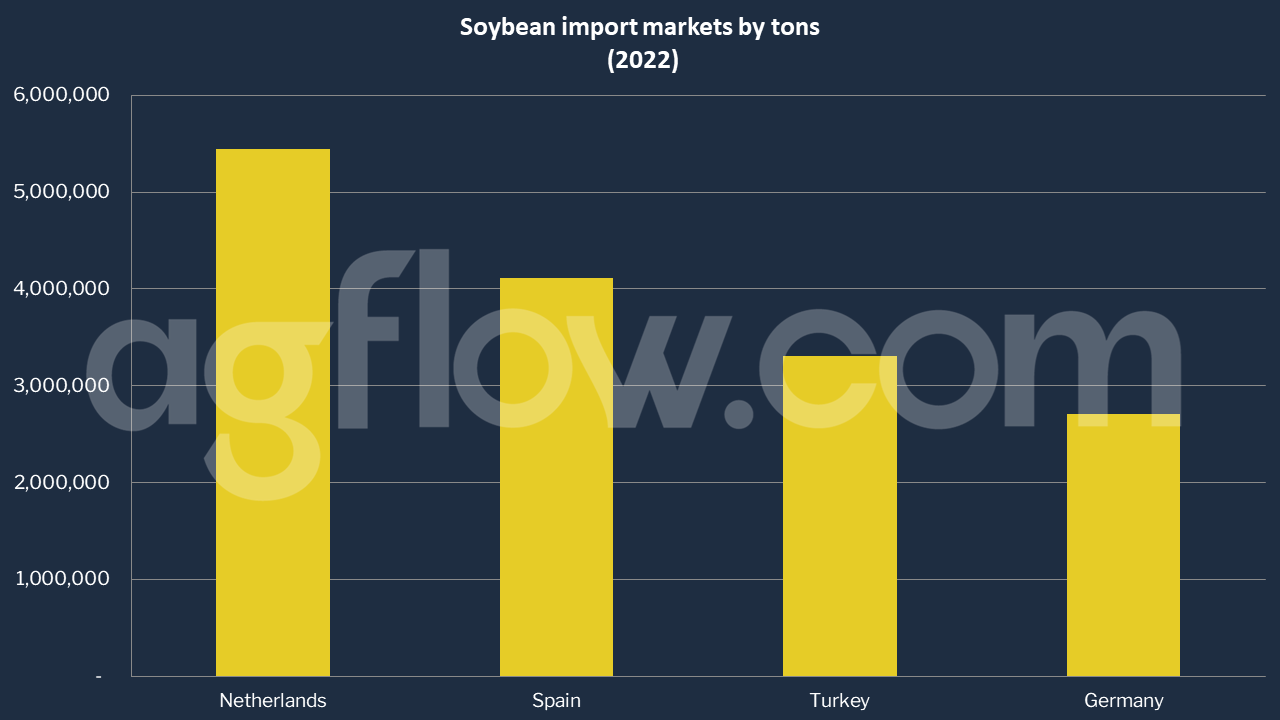 The EU’s Soybean Products Use