Cultivation of Wheat is one of the Omani farmers’ ancient practices. These days the farmers are using a modern irrigation system, as Wheat crops have shown adaptability in harsh desert conditions in some Wilayats (provinces). The Wheat crop production during the agricultural season 2020/2021 amounted to 2,649 tons only, an increase of 19 percent, while the total lands planted with Wheat last season amounted to 2,450 acres, recording an increase of 20 percent.
The Ministry of Agriculture, Fisheries, and Water Resources ministry works in cooperation with many international, regional, and local organizations and research centers through the implementation of research and extension programs to develop local Wheat varieties and introduce imported varieties under the prevailing conditions in the country. The majority state-owned Oman Flour Mills (OFM), one of the biggest importers of Wheat in the country, informed that Oman Government had begun subsidizing Wheat imports to offset the steep rise in international Wheat prices following the outbreak of hostilities between Ukraine and Russia in February.
The publicly traded company reported: “We would like to disclose that OFM received a letter from the Government for the Wheat subsidy effective from May 1, 2022. As global Wheat prices have seen a sharp increase, the Government is keen to stabilize flour prices in the local market”. It is the latest in a series of measures adopted by the Omani Government to ensure that the high international cost of Wheat, coupled with restrictions on global Wheat trade, do not translate into a substantial increase in the price of flour products in the Sultanate of Oman.
The Ministry of Agriculture, Fisheries, and Water Resources has been encouraging farmers to cultivate Wheat and preserve it as much as possible. This is also an attempt by the Government to diversify resources. The initiatives included allocating additional areas for some primary crops, such as Wheat, in the Najd area in the Dhofar Governorate. Wheat yield in Al Najd farms reaches about 1,500 tons. Rashid bin Saeed al Ghafri, Director-General of the Directorate of Agriculture, Fisheries and Water Resources in the Governorate of Dhofar, said: “The ministry is offering 50 percent subsidy on improved Wheat seed to farmers, in addition to Wheat harvesting equipment and coordinating with the flour mills to market Wheat produced by the farmers.” 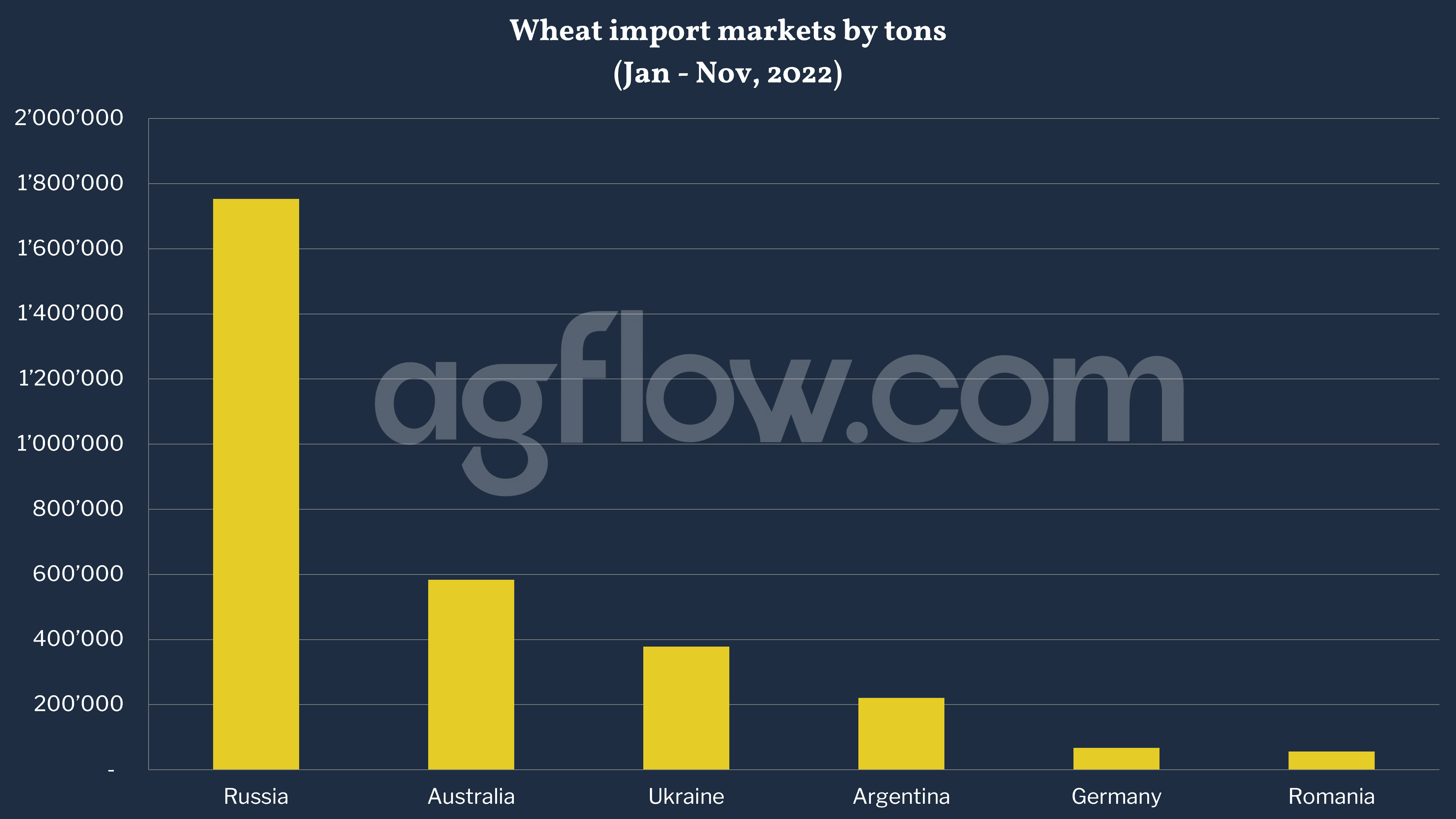 Oman had about 400,000 tons of Wheat in storage, enough reserves to cover six months, OFM’s Chief operating officer said in late September. After the U.N.-brokered grain export deal, Wheat shipment was to arrive in Oman, a purchase from Ukraine of about 30,000 tons. OFM processes about 60% of the country’s total annual imports of 800,000 tons, according to the official. It exports excess production, mainly to Yemen and East Africa.
According to AgFlow data, Russia led their Wheat import market with 1.7 million tons in Jan-Nov, 2022, followed by Australia (0.6 million tons), Ukraine (0.4 million tons), Argentina (0.2 million tons), and Germany (0.07 million tons). Other exporters were Romania, Canada, India, etc.
In 2018, Oman imported Wheat worth $144 million, becoming the 63rd largest importer of Wheat in the world. In the same year, Wheat was the 40th most imported product in Oman. Oman imports Wheat primarily from: Russia ($88.7 million), Australia ($18.4 million), Germany ($16.7 million), Canada ($10.7 million), and Ukraine ($5.32million). In 2020, Oman exported Wheat worth $119k, making it the 75th largest exporter of Wheat in the world. The leading destination of Wheat exports from Oman was the United Arab Emirates.

Read also : Wheat Prices Are Falling In Russia Due to the Replenished Stocks