Ocean Freight Rates for Dry Bulk Cargoes vary depending on parameters such as route lengths, price of crude oil and, of course, vessel type. 2020 has been a peculiar year due to the Covid-19 outbreak, having a huge impact on the economy, including freight. The first general lockdown had such a dramatic impact on crude oil that freight rates tanked in April. For bulk cargo in general, that means that the usual spread between different vessel sizes varied with these events throughout the year. These changes in spread do also present trading opportunities, as a vessel type can become more attractive than another. Reviewing freight rates for dry bulk cargoes in 2020 across vessel types and countries will show how these events influenced them and their execution throughout the year.

The ocean freight rates for dry bulk vary depending on factors like route length or vessel size. However, ports – due to their capacity or incapacity to accommodate different vessel sizes – can lead to some differences based on export origin.

Figure 1: Ocean Freight Rates for Corn by Vessel Type and Export Port in 2020 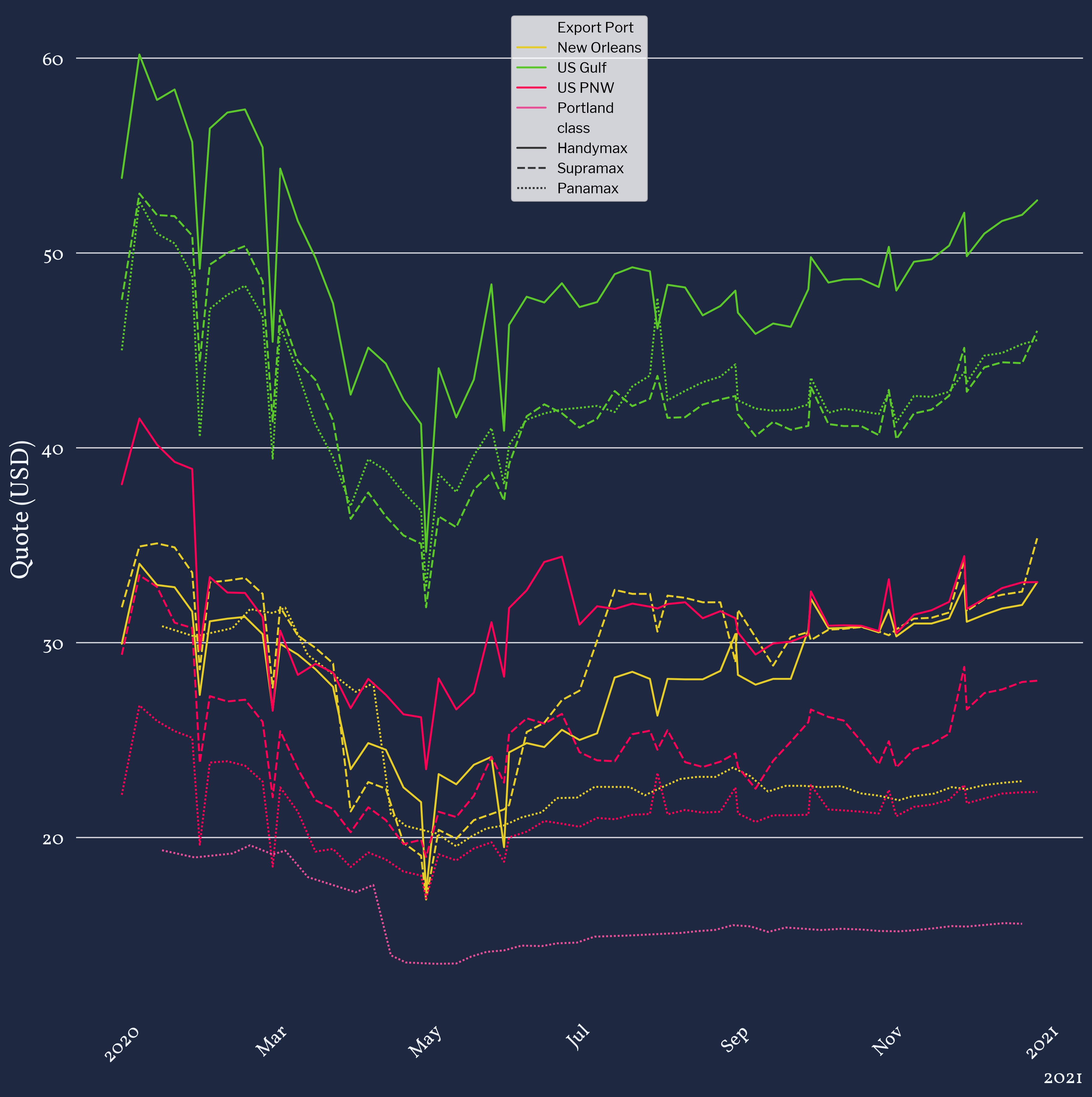 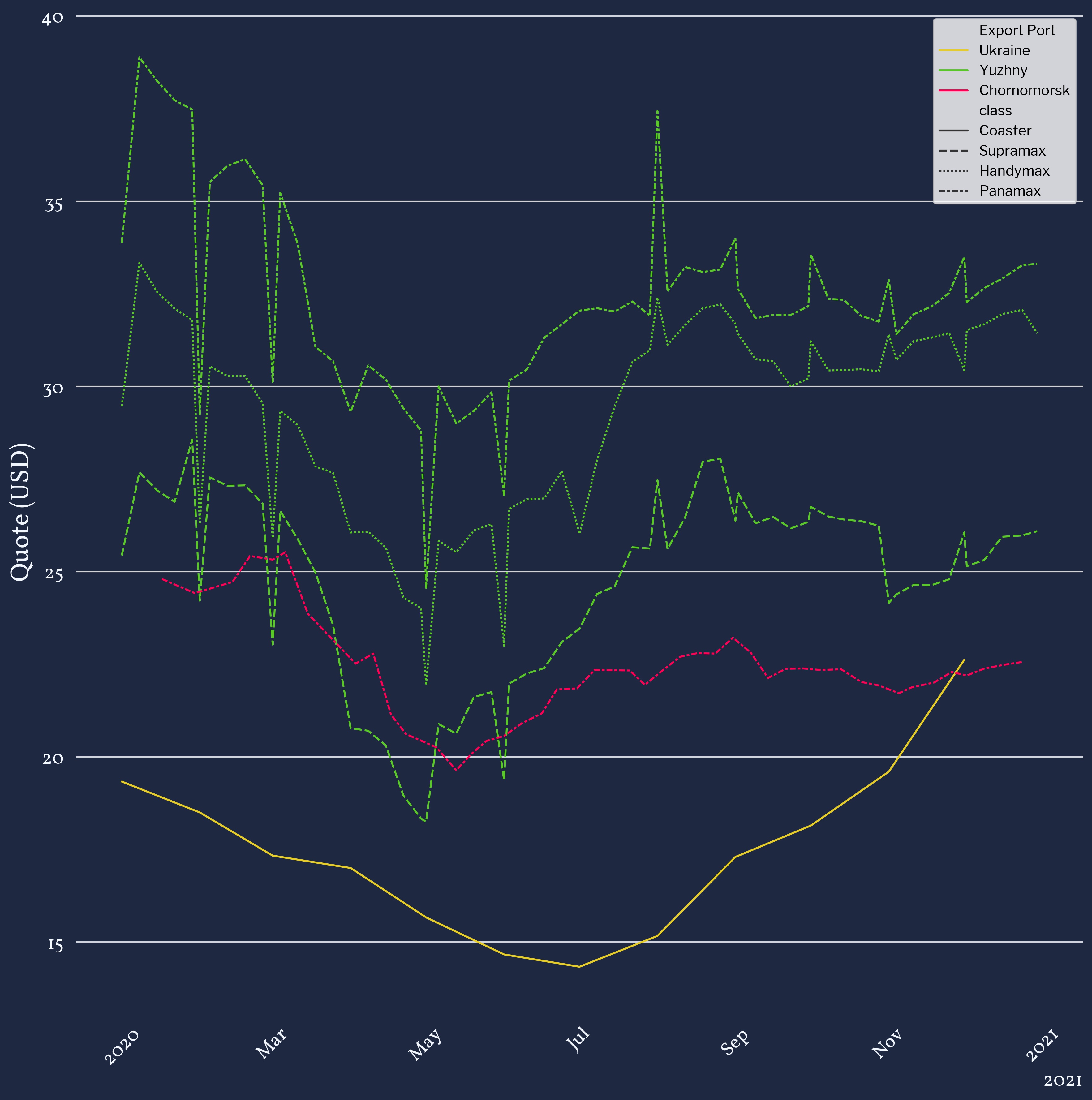 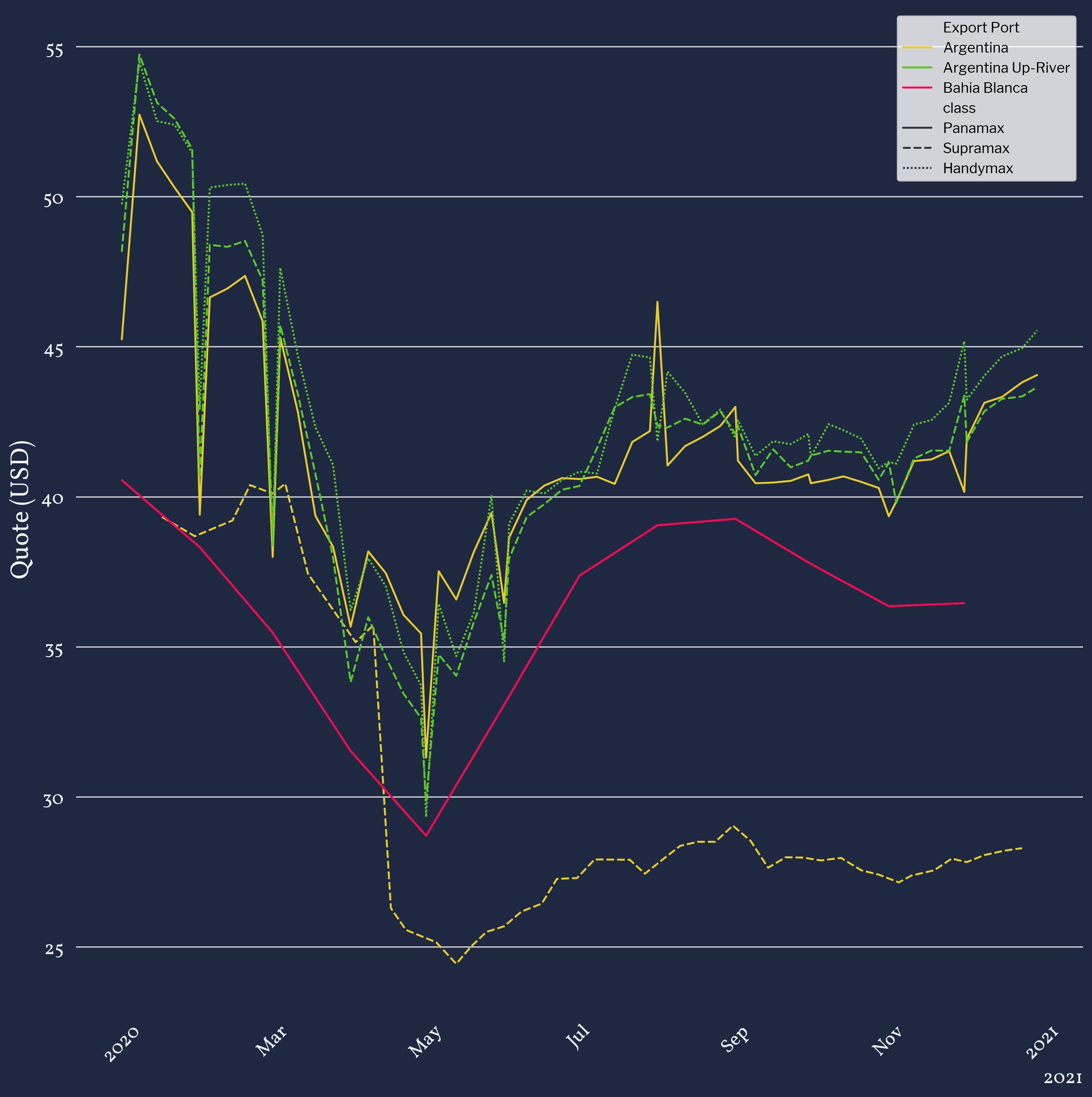 The time series for the Corn Ocean Freight rates by Export Ports and Vessel sizes in Figure 1  highlight the moment when Crude Oil prices reached a historic low in April 2020. This event, previously discussed in an AgFlow article published in Gafta World, corresponds to the year’s lowest freight rates.

In Plot 1, Portland is the most striking origin, in the sense that it never recovered from the Spring 2020 freight rates crash. This is also the case for Argentina (plot 3), although rates did increase slightly over the course of the year. Moreover, all three plots show a peak in freight rates near August 2020 for some export ports; which happens year-on-year as it is the annual shipments peak. Ukrainian freight rates reached their lowest point later than the rest of the other ports. However, the spread between the freight rates for the different vessel sizes is much smaller than for the other two countries, especially for Up-River origins.

The ocean bulk freight rates export ports in 2020 mainly suffered from the Crude Oil crisis in April 2020. It is clear for all the different parts of the world covered that later Covid-19 lockdowns and restrictions had little effect on the ocean freight rates overall. Still, some export ports did not recover well from this crash, leading to very competitive freight rates compared to other ports of the same origin.

This view skews towards exportation. Looking at the importation side of freight rates will then provide a more global perspective for the year. 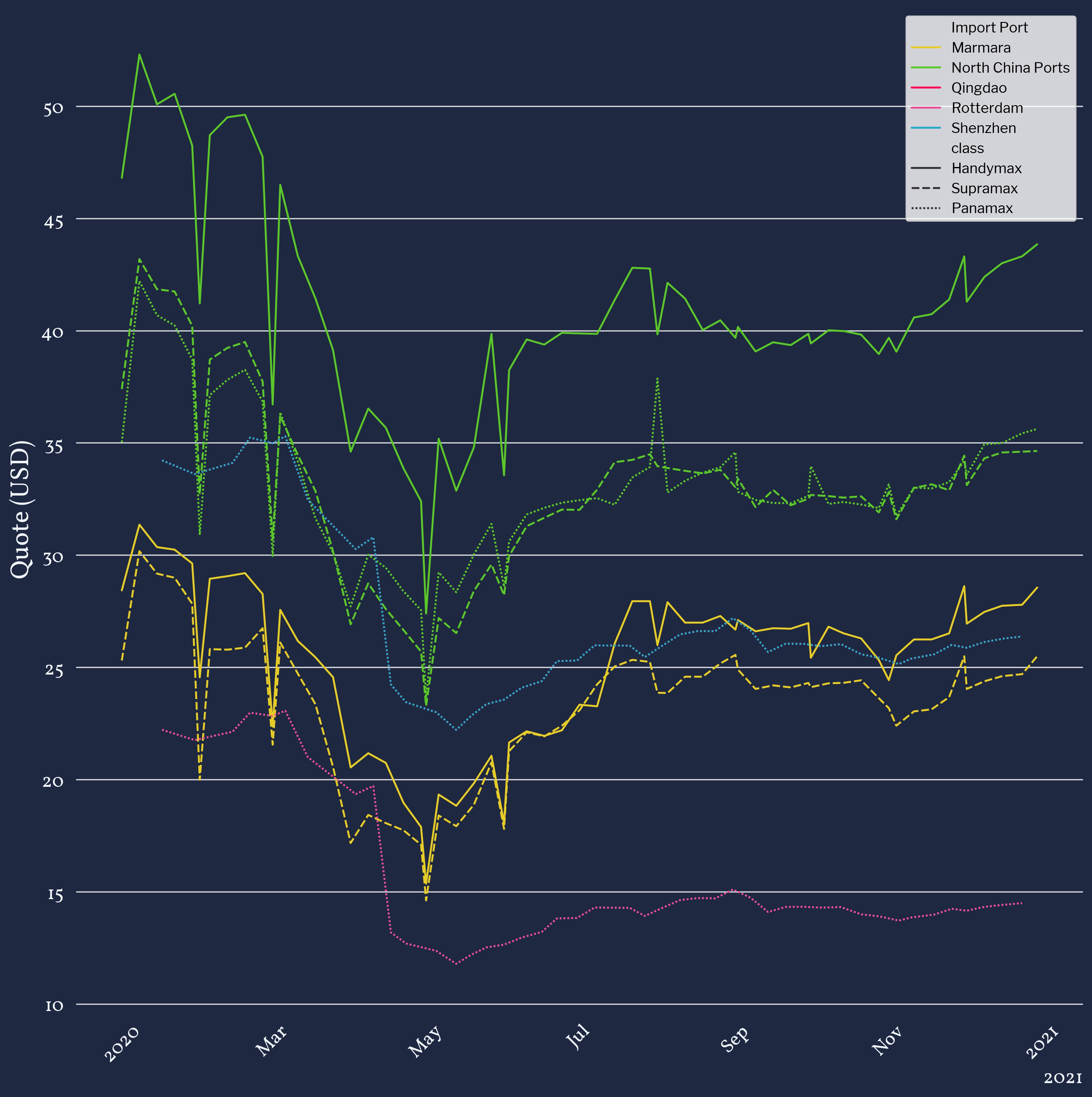 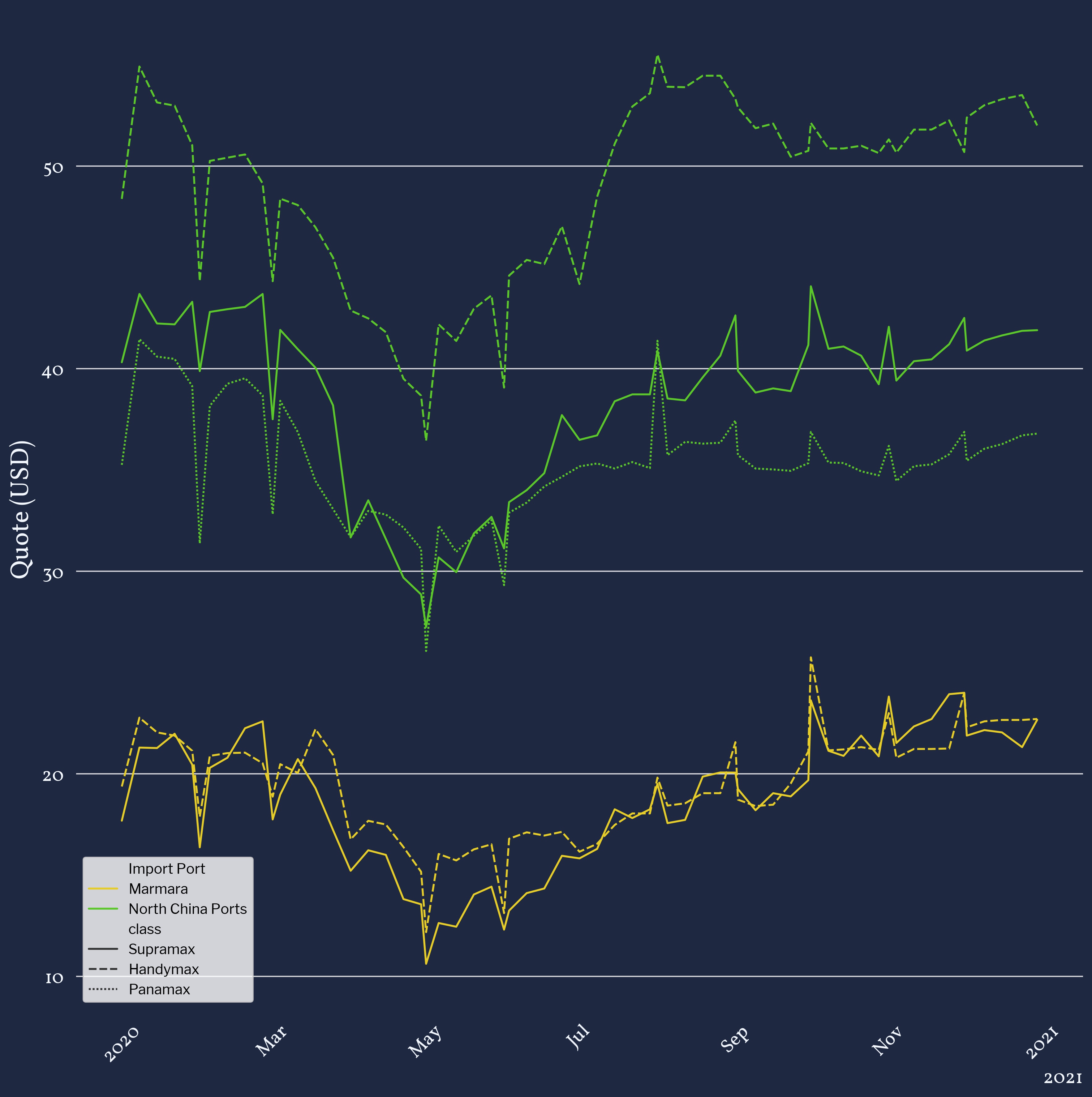 Figure 2 shows the import freight rates for Brazilian and French products by Import port and vessel size. Again, the Crude Oil prices’ event at the end of April 2020 is the most remarkable one.

Plot 1, illustrates imports from January 2020 to January 2021 from Brazil to several ports in three different origin countries. Chinese Imports show a spread in freight rates between vessel sizes in ports, but the ports are different. Indeed before April 2020, the freight rates to Shenzhen and North China Ports are close for Panamax and Supramax. However, after the Crude Oil crash, Shenzhen import freight rates did not recover, much like exports freight rates from Portland and Argentina.

For French products (plot 2) there are only two import ports for two different countries; logically the closest origin to France is the cheapest route. The most remarkable difference between both import ports is that, except for the April 2020 events, the size spread is much smaller for Marmara than for North China. This also translates into August peaks that are much smaller than the ones for North China ports.

The data shows that import freight rates logically suffered from the Crude Oil crash as well. This impacted port freight rates from similar countries by either making the size spread closer or widening it, particularly with French products. Additionally, some ports suffered the same consequences as export ports by not recovering after the crash, although they did not also suffer from the other Covid-19 events later this year.

The consequences of the crude oil crash on the size spread are visible throughout the year 2020. These changes in size spread between various vessel sizes will perhaps show a link with changes in execution.

The size spread is usually relatively stable between two different types of vessels. However, the consequences of an important change in a variable can change how this size spread behaves. As such, 2020 is particularly good for analyzing the size spread. 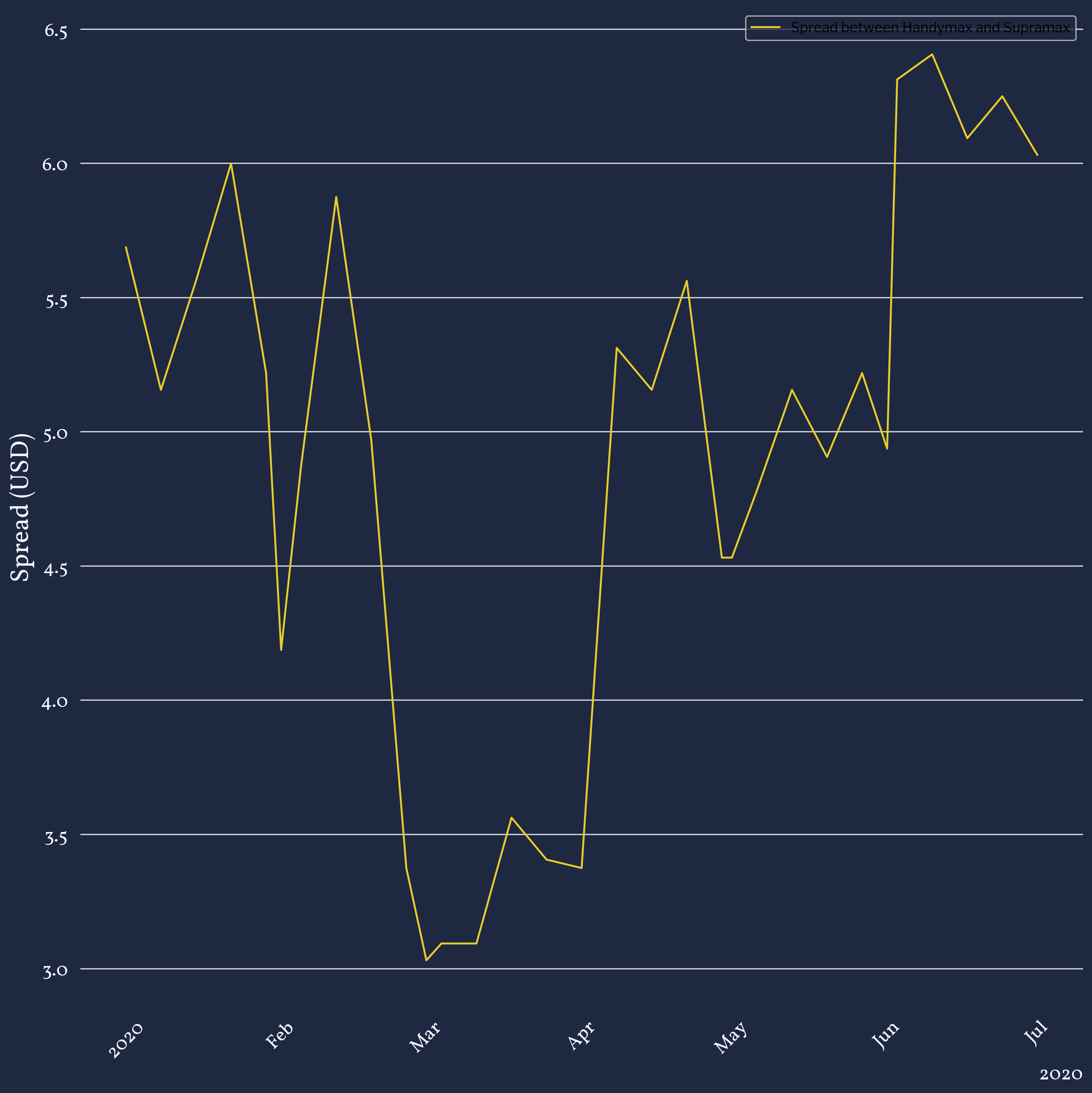 Spread between Handymax and Supramax 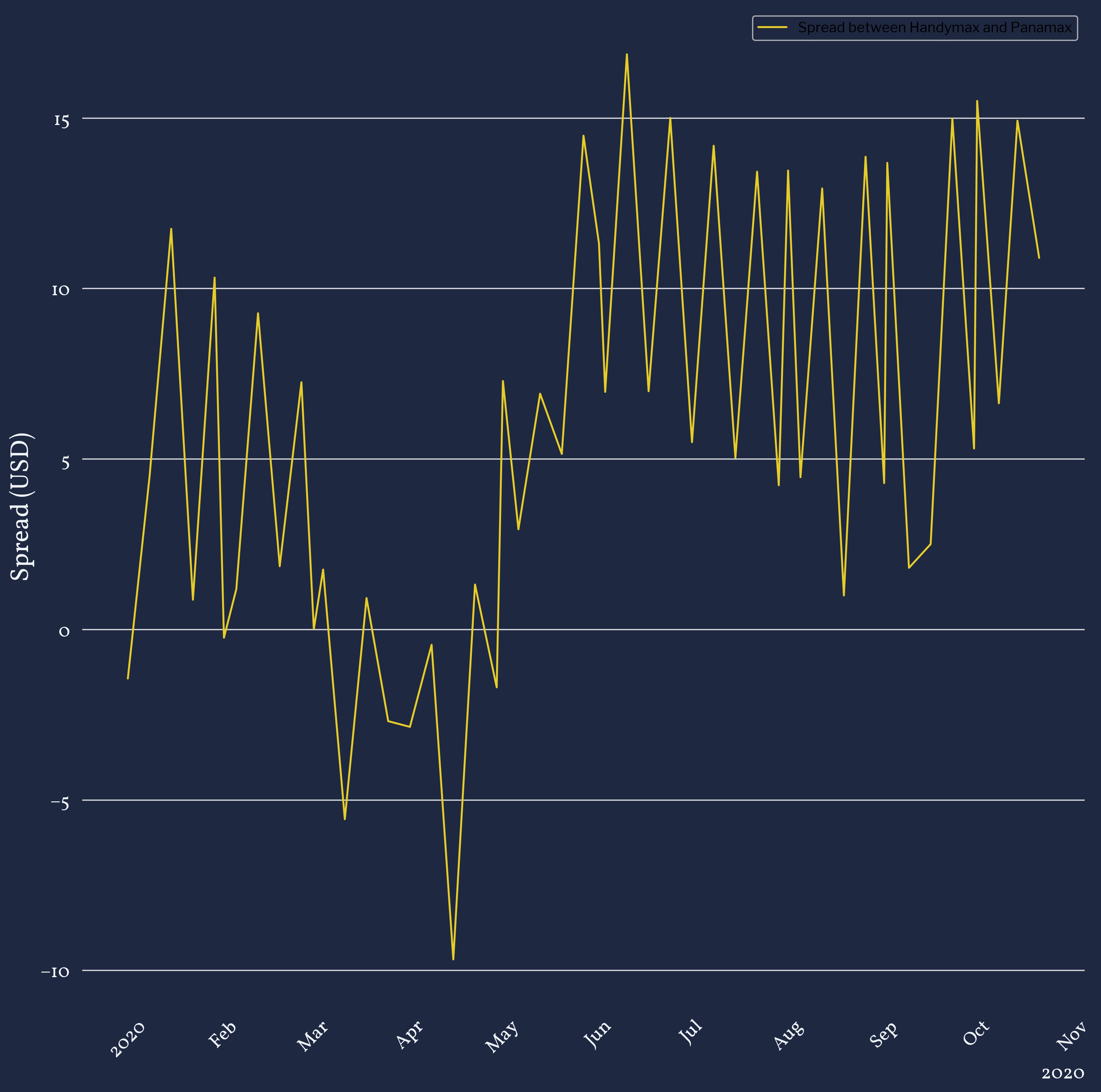 Spread Between Handymax and Panamax 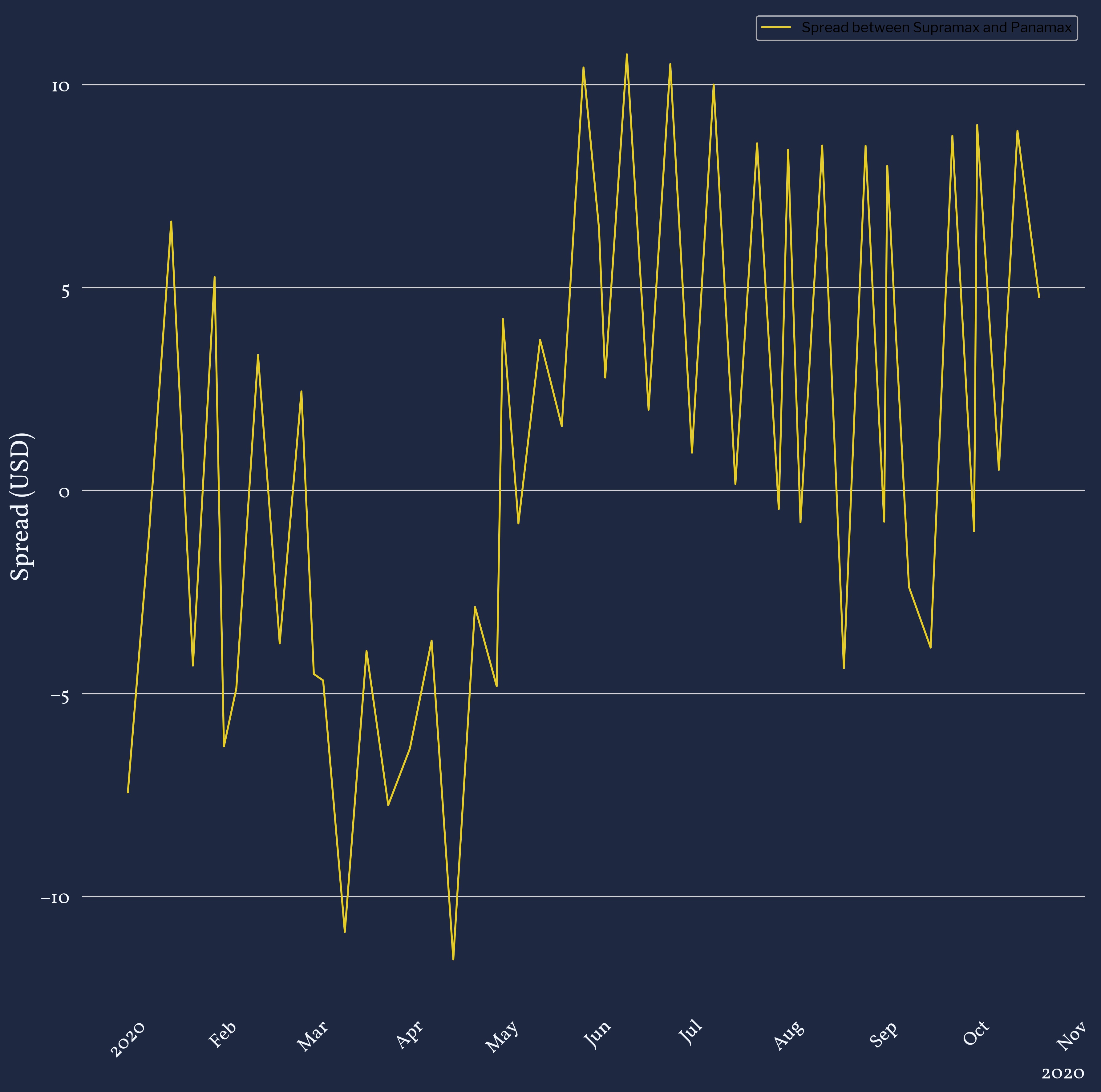 Spread Between Supramax and Panamax

Figure 3 displays the Spread between vessel sizes available from the AgFlow dataset for Brazil Corn Exports. While this analysis covers many different countries, it would be overwhelming to cover the size spread for all. We chose to focus on Brazil exports as they provide a sound basis to draw conclusions. Naturally, to compare vessel sizes, their timestamps must be similar. This is why the plots don’t necessarily cover the entire year.

Moreover, the spread for the last two combinations of vessels shows similar behavior where the spread changes direction as it approaches the year’s peak, favoring either Supramax or Panamax executions. 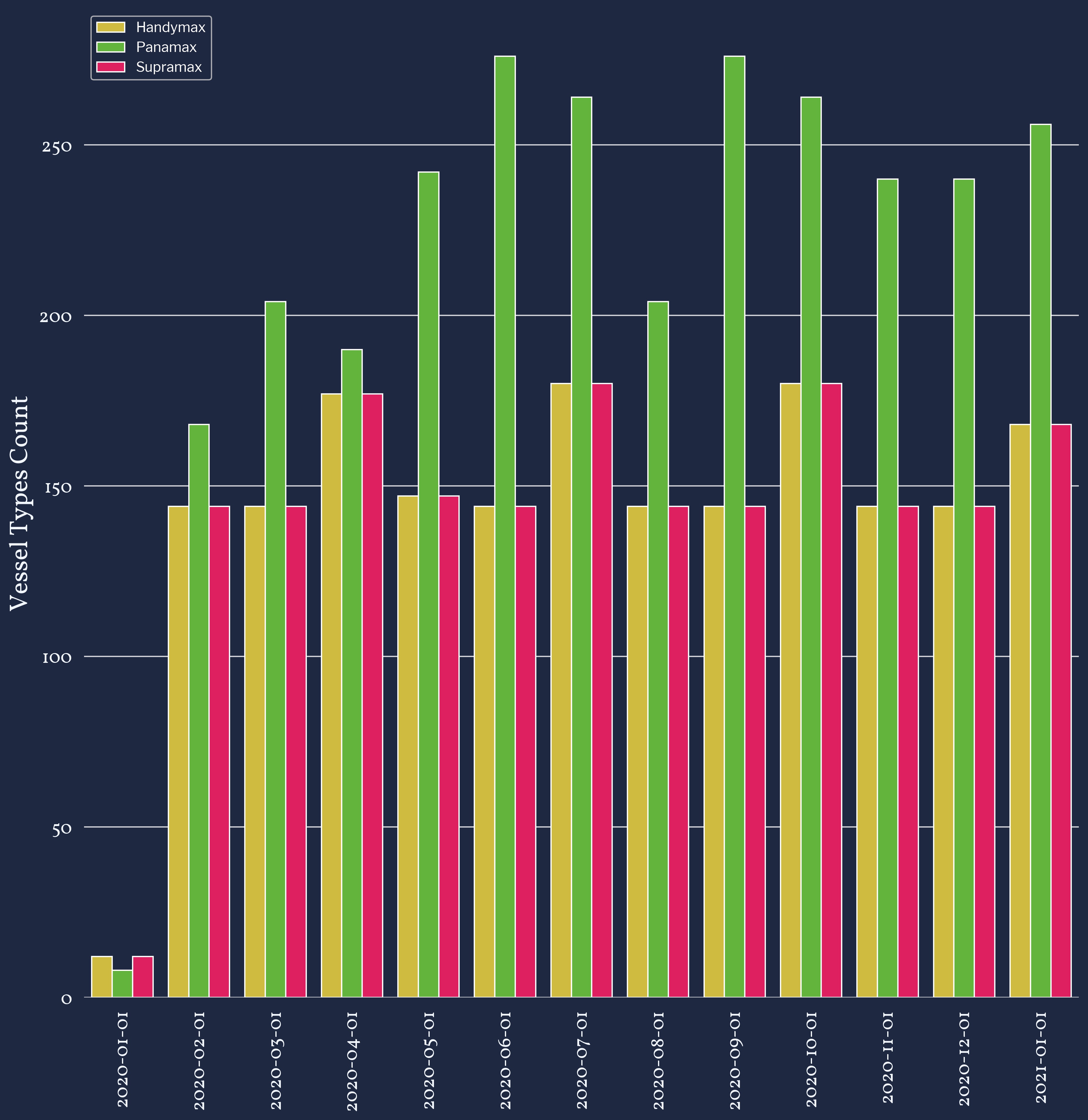 Figure 4 illustrates how many freight quotes by vessel types recorded by AgFlow monthly between January 2020 and January 2021. True enough, there is a preference for Panamax executions. However, the data does not indicate that this change in size spread influenced the executions overall.

Nonetheless, in April 2020, the Crude Oil prices crash did influence the vessel sizes for Corn executions. Thus, Panamax class vessels, although still dominant, are proportionally less favored than they are for the rest of the year.

Lastly, figure 4 shows that the proverbial August peak was instead recorded in July and October 2020.

Freight rates across the world in 2020 suffered from the consequences of Covid-19. The most impactful event was the April 2020 Crude Oil prices crash, which was visible throughout countries for both export and import rates.

Import and export rates indeed followed the crude oil prices and dropped dramatically in April 2020. However, most freight rates recovered from it, and overall did not suffer from other, more minor consequences induced by the pandemic. Nonetheless, some routes, like Shenzhen Corn Imports from Brazil, did not retrieve their previous levels. Which could potentially indicate that freight rates were inflated. The most impressive impact however was on the size spread.

Indeed, the size spread analysis revealed an inversion in the relationship between vessel sizes for April and the August Peak. This change impacted the executions for the April period, with Panamax executions being significantly lower than usual.  Additionally, August’s yearly peak showed inconsistency,  whereby it did not have as many vessels as for July or October, an indication that this was perhaps due to those consequences.

In conclusion, the April 2020 Crude Oil crash was the main driver of freight rates variations and decline. Further Covid-19 restrictions (like Lockdowns or border closing, among others) were better prepared and apprehended by the freight market. Consequently, they had less of an impact on freight rates overall than the panic-induced Crash in April, and led to a steady – though not always steep – increase for ocean bulk freight rates. Nevertheless, vessel price spreads and executions had lasting effects, and seemed to be more impacted by those limitations.

With 2021, the health crisis is still not resolved, although there are hopeful signs. As such, changes in freight rates, size spreads, and executions will depend on the lessons learned from managing these events in 2020.