The US primarily produces Corn for ethanol production, livestock feed, and export, of which about 10% is used for food, beverage, and manufacturing. Mexico, by contrast, produces mostly white Corn used directly for human consumption in the form of tortillas and other staple foods from Mexican cuisine. Mexico must import about 5 percent of its white Corn to fulfill domestic demand.

While white Corn is the mainstay, Mexico’s yellow Corn imports are increasing, reflecting Mexico’s growing livestock and poultry industries that its scant yellow Corn production is unable to support at current rates. This trend in Corn trade between the US and Mexico is due to the very different characteristics of Corn cultivation in Mexico and the US.

The US Corn sector is much larger than the Mexican Corn sector. Mexican Corn farms are small-scale, with an average of 3.6 hectares each, and government policies support small-scale farming through direct payments and other programs.

However, in 2020, Mexico’s President, Andres Manuel Lopez Obrador, announced the country would end the import of genetically modified (GM) Corn for human consumption by 2024. This decision will directly affect the traditional trade between the two countries.

Due to Mexico’s proposed GM Corn ban, import between the two countries expected to take effect in 2024, has the potential to increase Mexico’s food insecurity, add $4.4 billion to its Corn import costs, and impose fundamental and costly changes on the U.S. farming and grain handling sectors. This ban can also affect other major exporters such as Canada, Brazil, and Argentina to shift production to meet Mexico’s demand. According to the AgFlow data, the US led Mexico’s import market with 14.7 million tons of Corn in 2021-2022, followed by Brazil (0.7 million tons), and Argentina (0.2 million tons). 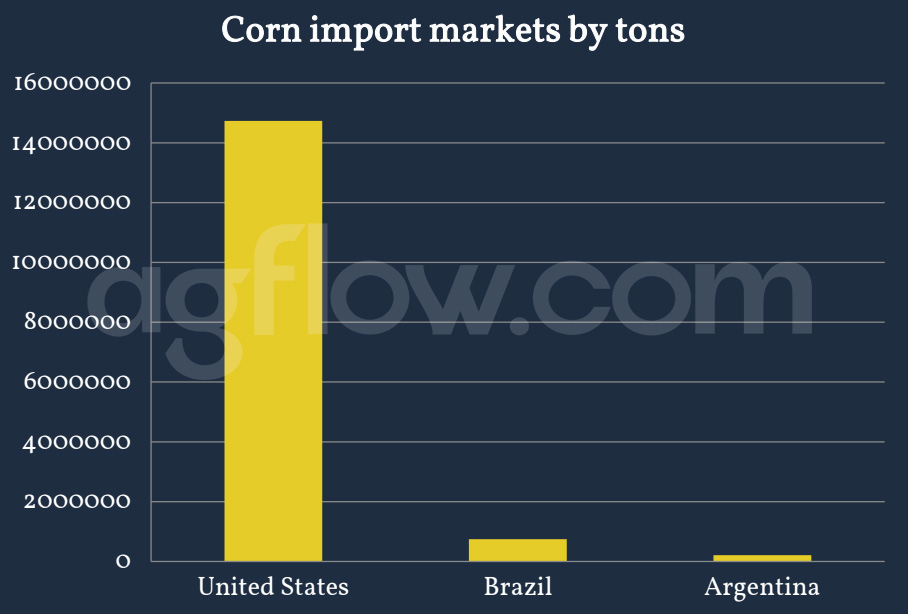 Mexico’s 2021 Corn imports accounted for 4.4 percent of the 2021/22 US crop (and 24 percent of U.S. Corn exports).  They exceeded the production of Ohio, the eighth largest Corn-producing state in the US Mexico is a profoundly important market for US Corn producers. Its loss would have significant impacts not only in the US but in nearly all connected markets. The GM Corn sector suffers the impact of a sudden reduction in demand that is only partly offset by exports to other countries, and prices fall as a result.

Conversely, the non-GM Corn industry experiences a sudden demand surge but, due to the fact only one crop is produced each year, cannot alter production in the first year. Also, the price of non-GM Corn rises sharply in the first two years of the ban as markets work to ration demand, and buyers in the US, Japan, South Korea, and Mexico for relatively small supplies.

In the first year of the ban, the US non-GM ending stocks-to-use ratio falls from 15.2 percent in the baseline scenario to 7.0 percent, and the non-GM price increases from $3.78/bushel to $5.37/bushel. This price increase causes Mexico to reduce its Corn imports, which may add to existing food insecurity. In contrast, the U.S. GM ending stocks-to-use ratio increases from 15.2 percent to 17.5 percent and the GM price falls by $0.32/bushel.

Even though, the country announced it will be GMO-free, Mexico is forecast to see a slight increase in Corn imports in the 2022-23 marketing year, which begins in October, to meet rising domestic consumption, according to a recent Global Agricultural Information Network report from the Foreign Agricultural Service of the US Department of Agriculture (USDA).

Read also: Did War Affect the US Corn Industry?