World Corn production is about 1.1 billion tons per year. About a third of that, 350 million tons, is produced in the United States. Until recently, Japan was the world’s largest Corn importer, but now Mexico and China overtook Japan. In particular, China has been steadily increasing its import volume since 2020. China is also the second largest Corn producer in the world. Japan imports about 15 million tons of Corn.

FAS (Foreign Agricultural Service) Tokyo anticipated Corn imports to decline to 15.2 million tons in MY2021/22 and MY2022/23 as high Corn prices push feed mills to increase rice in favor of Corn in compound feed rations. As per AgFlow data, the United States shipped 9.9 million tons of Corn to Japan in 2021-2022, followed by Brazil (2.0 million tons), Argentina (1.1 million tons), and Ukraine (0.1 million tons).

Eighty percent of the domestic consumption of Corn is consumed mainly as feed for livestock such as pigs, cows, and chickens. In Japan, poultry and swine consume over 65 percent of compound feed. FAS Tokyo revised the MY2020/21 and MY2021/22 Food, Seeds, and Industrial (FSI) consumption estimate down to 3.45 million tons as Corn starch demand remains sluggish.

MY 2020/21 Corn starch production declined two percent from the previous year, an approximately 60,000 tons of Corn equivalent decrease. FAS Tokyo forecasts the MY2022/23 FSI consumption to increase slightly to 3.5 million tons reflecting a gradual recovery of Cornstarch demand in line with an overall economic recovery in Japan.

In Japan, Cornstarch accounts for approximately 90 percent of FSI consumption. Manufacturers use over half of the Cornstarch to produce high fructose Corn syrup (HFCS), half of which is then used to manufacture soft drinks. COVID-19 related restrictions reduced demand for soft drinks in Japan, resulting in declining Cornstarch production.

FAS Tokyo anticipates Cornstarch demand to remain weak in MY2021/22 but to gradually recover in MY2022/23 in line with an overall return to regular economic activity. However, industry sources expect the preference of Japanese consumers for low-sugar and sugar-free drinks to hamper a full recovery in Cornstarch demand to MY2018/19 levels. 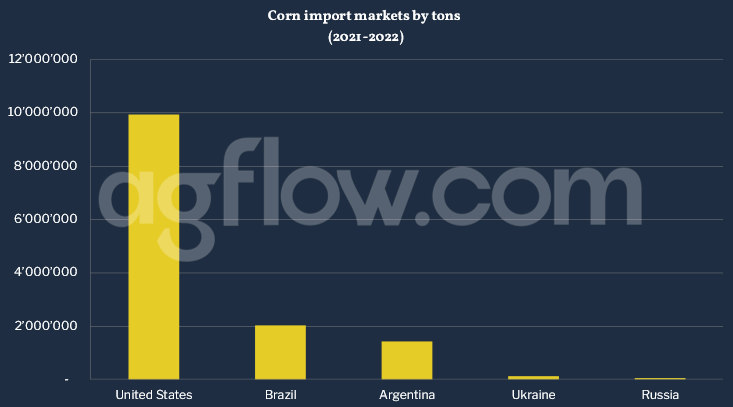 In Japan, Corn is widely cultivated, mainly in Hokkaido, to use the whole plant body, such as Corn kernels, stems, and leaves, as feed for cattle. Japanese Corn for grain production is negligible but steadily increased in recent years. In MY2021/22, Japanese Corn production totaled 6,477 tons on 992 hectares, up 23 percent and 26 percent, respectively, from the previous year.

FAS/Tokyo forecasts MY2022/23 production and area harvested to expand to 8,500 tons and 1,300 hectares, respectively. The Ministry of Agriculture, Forestry, and Fisheries (MAFF), in response to surging prices for imported Corn, increased support payments for grain Corn produced in paddy fields. Growers typically use the Corn on a farm for animal feed or sell it locally.