How Is the Brazil Soybean Cash Market Structured during the 2021 Harvest?

The Brazil Soybean harvest 2021 is currently taking place. However, it suffered from delays due to the droughts resulting from the La Nina event, which was particularly intense in southern Brazil. It was only relieved by the late rain at the end of January and February 2021. This did not change the expected record of 133Mmt Soybean crop yield released by USDA in September and confirmed in January. However, the recent rains lead analysts to expect an even higher yield than previously forecasted. With this in mind, the current bull market – that arose in October last year -drives the market towards China, influencing the Brazil Soybean market, which is also known to have a major influence on the United States Soybean market. As such, there are multiple factors to take into account that structure the Soybean market, starting with Brazil.

From Brazil, USA, Argentina, and more

The structure of the cash market revolves around the crop yield prediction and the demand for Brazil Soybean. The rally behind cash prices usually starts during the off-season and stabilizes around harvest season in the first quarter. Looking at cash spot prices will show how the bull market impacted the cash market for Brazil’s Soybean cash market this year. 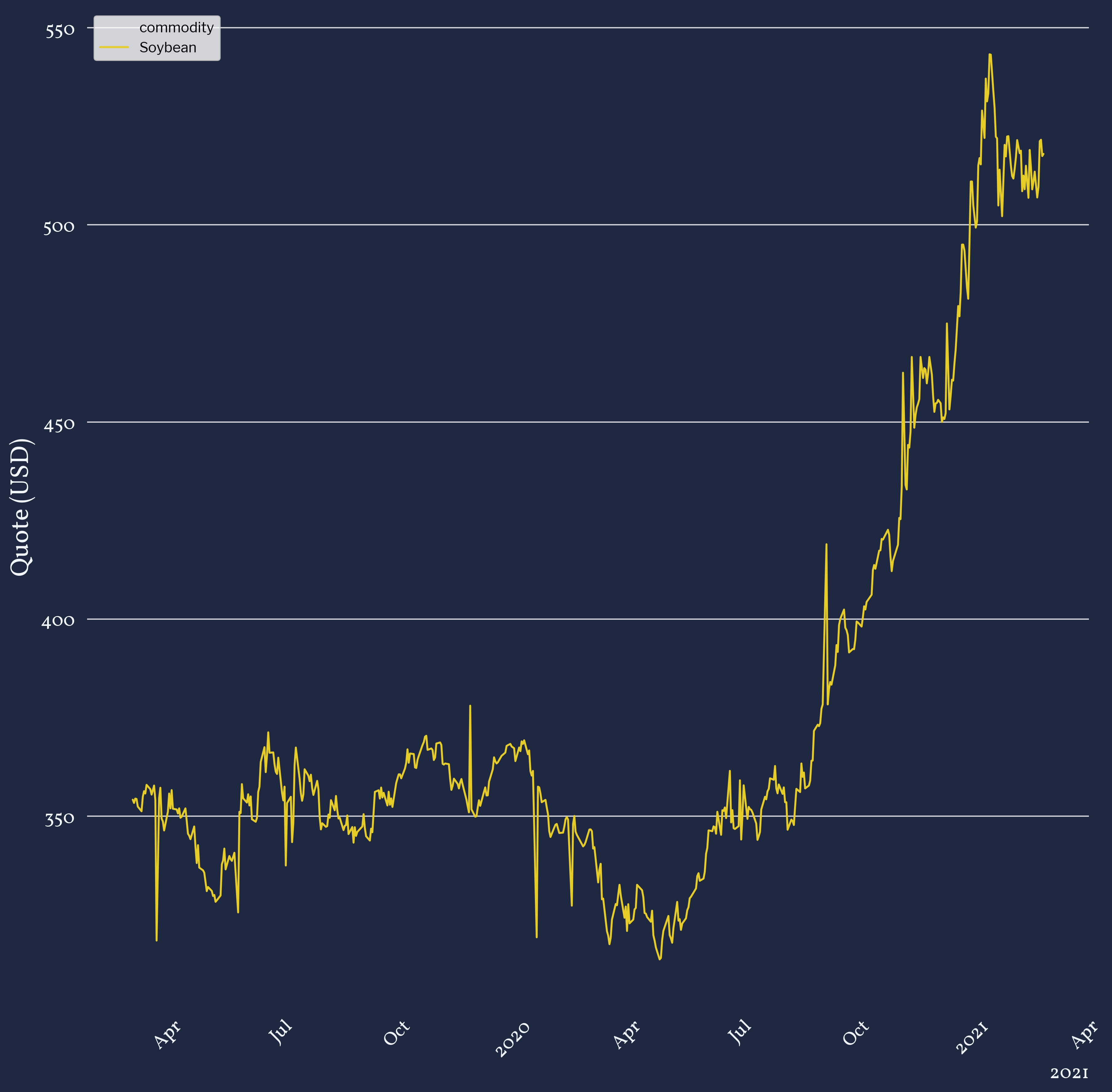 Brazil Soybean cash spot prices reveal the impact of the bull market in 2021. Indeed, prices since 2019 move around the $350/mt bar.

The rally behind the Brazil Soybean harvest 2021 started at the end of April 2020 and overcame the $400/mt in October at the bull market’s beginning. Remarkably, the acceleration of the price increase began in September, in the wake of the USDA’s crop yield prediction report.

As it stands, the prices stabilized between around $500/mt and $530/mt in February, equating to a 148% price increase year-on-year. This stability ultimately results from tightening crush margins. 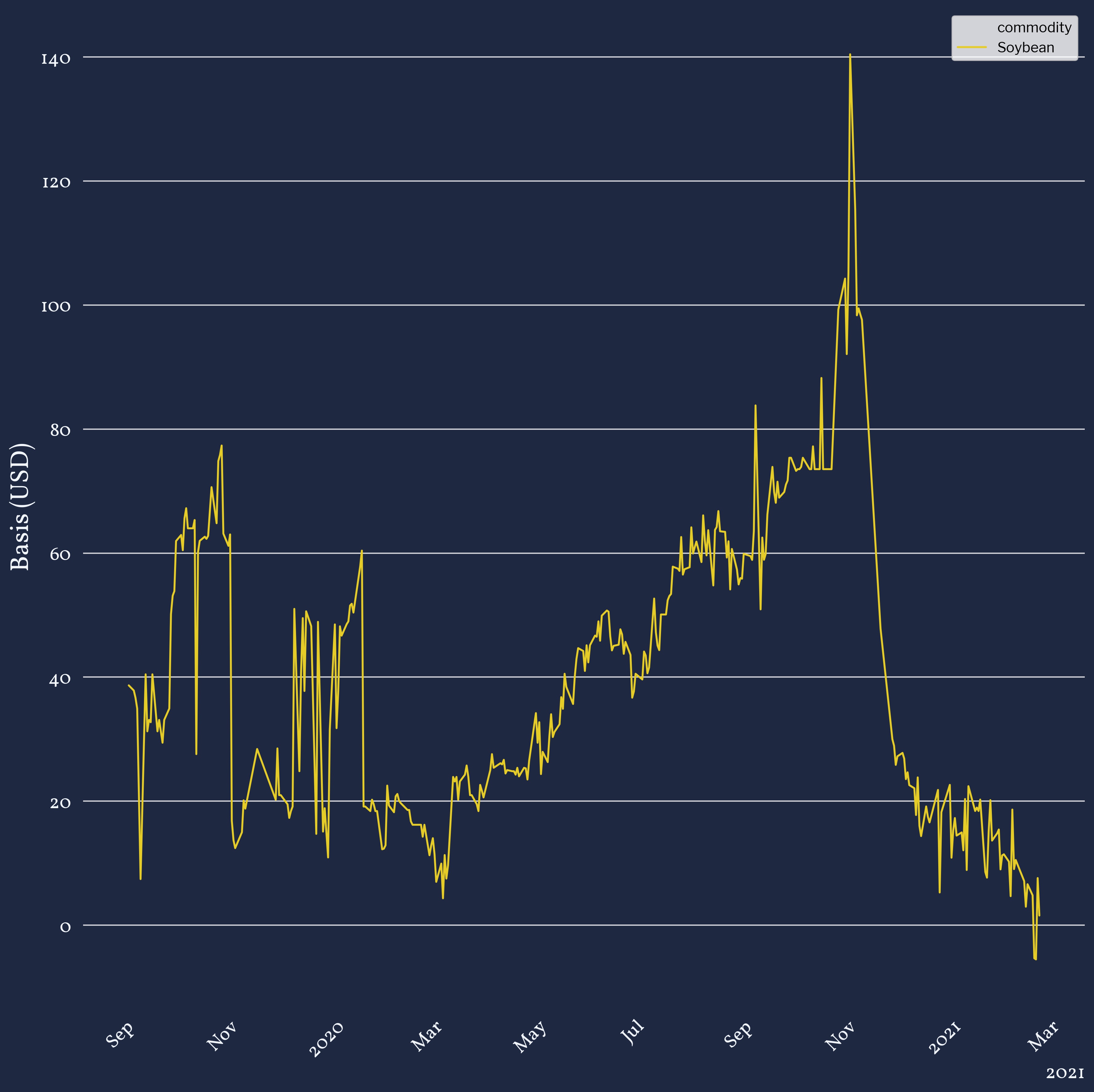 The time-series in Figure 2 shows the reconstructed price basis for Brazil Soybean corn during the summer between September 2019 and February 2021. Compared to last year the basis also sharply increased, particularly in November where cash prices were around $140 higher than future quotes. This shows that cash prices drive the Brazil Soybean market and the Cash Market is indeed pricing the record-high yields. However, futures caught up by the beginning of 2021, probably—as the flat cash prices in February show— due to the crush margin probably reaching a critically thin point. However decreased, the basis remains positive overall.

Therefore, this year-on-year increase results from the craze behind the record high Soybean output predictions from September, the delayed harvest season, and the promise of an all-buying Chinese market from October onward. 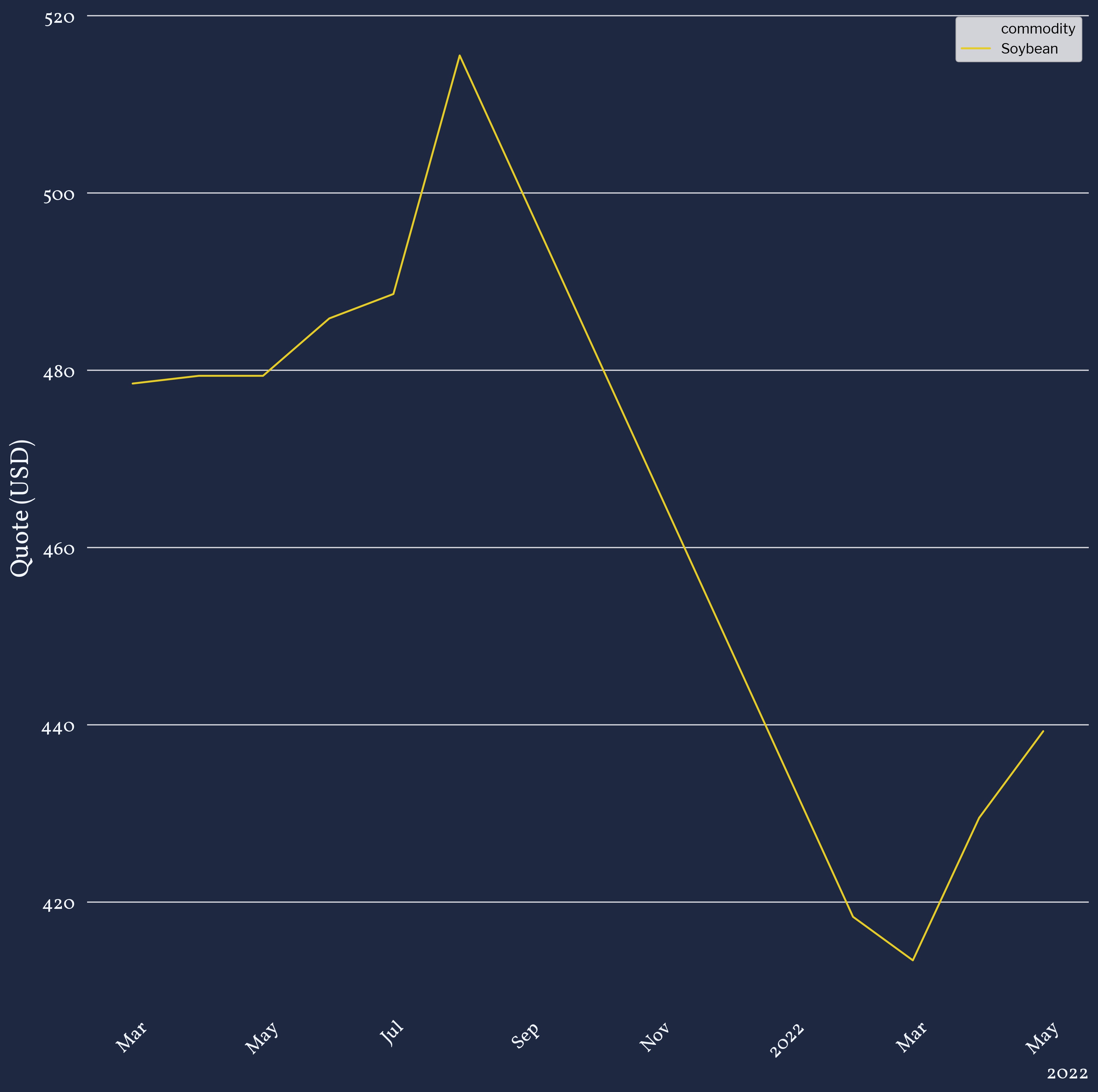 The forward cash contracts extend all the way to shipments in May 2022. They are an aggregation of contract prices and thus not set in stone. In the short term, contract prices increase until August 2021 to about the level Spot prices are at the moment.

In reality, this will ultimately depend on the price evolution of Soybean Oil and Soybean Meal as the crush margin can put a cap on the demand. Then, looking at last year’s Soybean harvest shipments’ destination will show where this year’s crop import lies.

How Much Soybean is Brazil Going To Harvest & Where Will It Ship?

Unsurprisingly, as the largest Soybean consumer in the world, China is the leading importing country. However, a large group of other countries also share the rest of the Brazil Soybean exports. 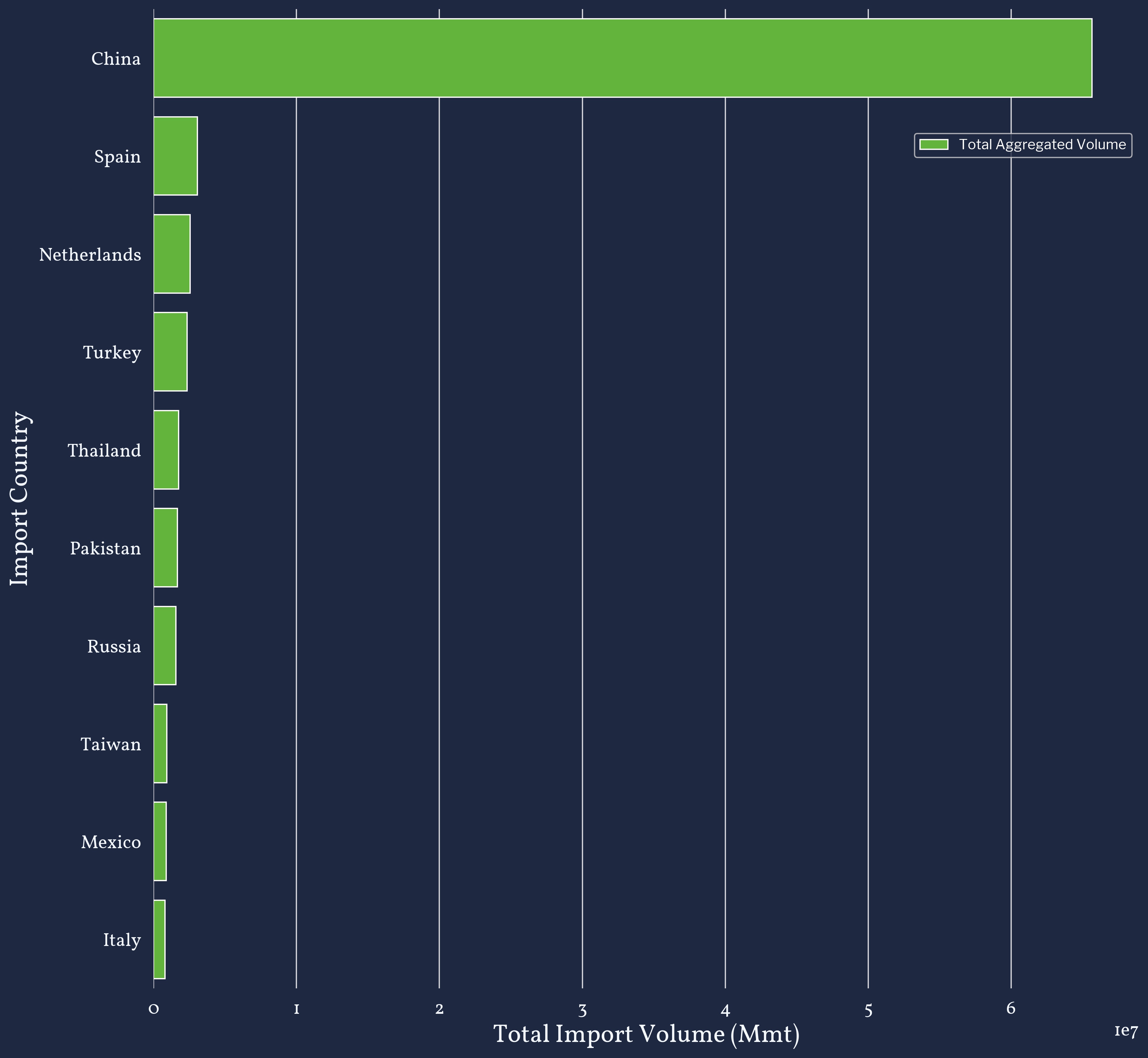 Indeed, the total volume of imported Brazilian Soybean in 2020 was more than 65 Mmt, according to AgFlow’s trade flows data. For the ten other countries displayed in Figure 4, the second-largest – Spain – is slightly more than 3 Mmt, which is almost 22 times less than China. This massive difference in shipment volumes shows that Brazil’s Soybean massively relies on China’s imports – just like the United States’ Soybean market.

Figure 5: Distribution of Import Countries based on Shipment Volumes 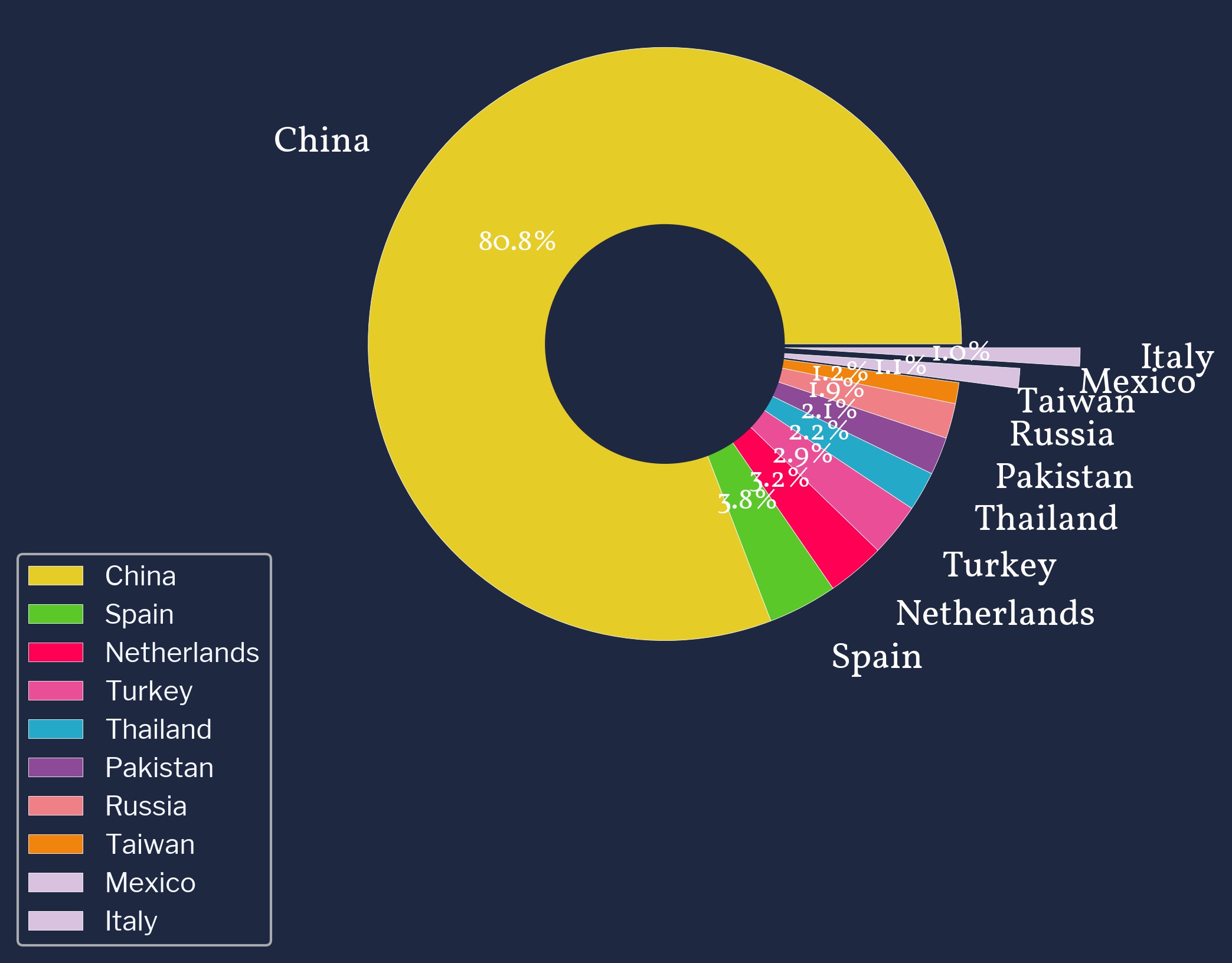 The pie chart for Figure 5 reveals that China represented 80.8% ~ 81% of all shipments volume in terms of percentages among the top 10 import countries. Except for Spain, the rest of the import countries are relatively well spread, with the distribution between 3 and 2% for five countries.

It also shows that these minor Soybean shipments are globally distributed, with import countries in Europe, South-East Asia, the Middle-East, or even North America and Mexico. This demonstrates a global demand for, and reliance on Brazil’s Soybean Shipments, whilst Brazil depends primarily on China’s imports for its Soybean market.

With this year’s exceptional yield, all these countries should see a raw increase in import volumes, but the distribution order should probably remain similar. However, analysts in India expect the Soybean market to produce 15% less than last year. This already led to higher Soybean Oil and Palm Oil imports to balance this loss. Thus, India (which is absent from the dataset) could perhaps try to get a piece of Brazil’s Soybean this season, shifting the distribution order.

Follow Soybean shipments from the USA, Argentina to China, Mexico, or the Netherlands

Brazil’s Soybean crop predictions remained intact throughout the summer, even though an arid summer due to La Nina impacted the quality of crops in Brazil’s most southern parts. In fact, the late rains in January improved crop quality, pushing analysts to revise these predictions upwards.

In conjunction with the bull market, these circumstances led the seasonal spot cash prices rally to increase Brazil Soybean prices past the $500/mt bar in late January, and a somewhat stable position—at the same level— throughout February and March thus far, perhaps limited by the crush margin. Additionally, forward cash contracts show that the demand remains strong in the coming months, and decreasing prices past August 2021 are a strong incentive to buy Soybean products.

Based on last year’s shipment destinations distribution, the most significant part of Brazil Soybean export will undoubtedly go to China, which will increase the total volume of imports due to the sheer volume produced this harvest season and the center of the bull market demand. However, India could potentially import some of Brazil’s Soybean crops this year, which —without threatening China— can disrupt the minor import destinations’ demand.

All in all, Brazil’s Soybean cash market during the 2021 harvest is solid. Bolstered by the Chinese demand and the delayed harvest, cash prices are at a historical high, driving the future prices and the market, as shown by the basis. Nonetheless, the necessity and reliance on this product being what it is, prices will not hamper the demand and exports. As Brazil Soybean’s harvest season comes earlier in the year, and with their mutual reliance on the Chinese market, it is incredibly likely that the Brazilian Soybean market will lift the United Soybean market in a tide-like fashion.

Read also: The Growth and Relevance of Biodiesel in Brazilian Market – by Aboissa Commodity Brokers