France is a cereal land with a production recognized in volume and quality, which allows it to ensure its food sovereignty. Soft Wheat is the leading cereal produced in France. The soft Wheat sector is very organized and integrates producers (about 300,000 farms specializing in cereals), the collectors (over 152 cooperatives and 839 traders) and processors. The main four producing regions are Hauts-de-France (20% of national production), Grand-Est (15%), Centre-Val de Loire (13%) and Normandy (11%); they concentrate 58% of the total production.

The domestic market consumes, each year, about half of the production and the rest of the harvested grain is intended for export, which allows France to rank 5th in the world as a Wheat exporter, behind Russia, the USA, Canada and Ukraine. Around 30.5 million tons of soft Wheat should be collected in 2022, according to French Agriculture Ministry: only 7% less than in 2021, but almost 12% more than in 2020. For durum Wheat, the Ministry estimated production at 1.4 million tons. Durum yield is estimated at 5.3 tons per hectare, just below last year’s levels. And the 2022-2023 marketing campaign starts “under good auspices”.

In July-August, French soft Wheat exports showed unprecedented dynamism, boosted by good availability and the low presence of Wheat from the Black Sea, which supported prices. French soft Wheat exports in July-August were forecast to exceed 2.4 million tons, more than 800,000 tons above the previous record in 2018. French Wheat is acclaimed by international buyers such as Egypt, Morocco, Algeria, sub-Saharan Africa, as well as by less usual customers.

FranceAgriMer stressed in July that the current campaign has started in a “particularly dynamic way towards sub-Saharan Africa, Yemen, Egypt and the Maghreb”. Egypt, the world’s leading Wheat importer, already placed an order for more than 900,000 tons of French Wheat, and of the 700,000 tons already purchased by Algeria for future shipments, a significant portion could come from France.

France sold 530,000 tons of Wheat to Egypt which, taking advantage of development aid of 500 million dollars from the World Bank to finance its Wheat imports, acquired 1.3 million tons between June and July tons. According to the AgFlow data, Algeria led their export market by 1.3 million tons of Wheat in the last 3 months, followed by Morocco and Yemen. 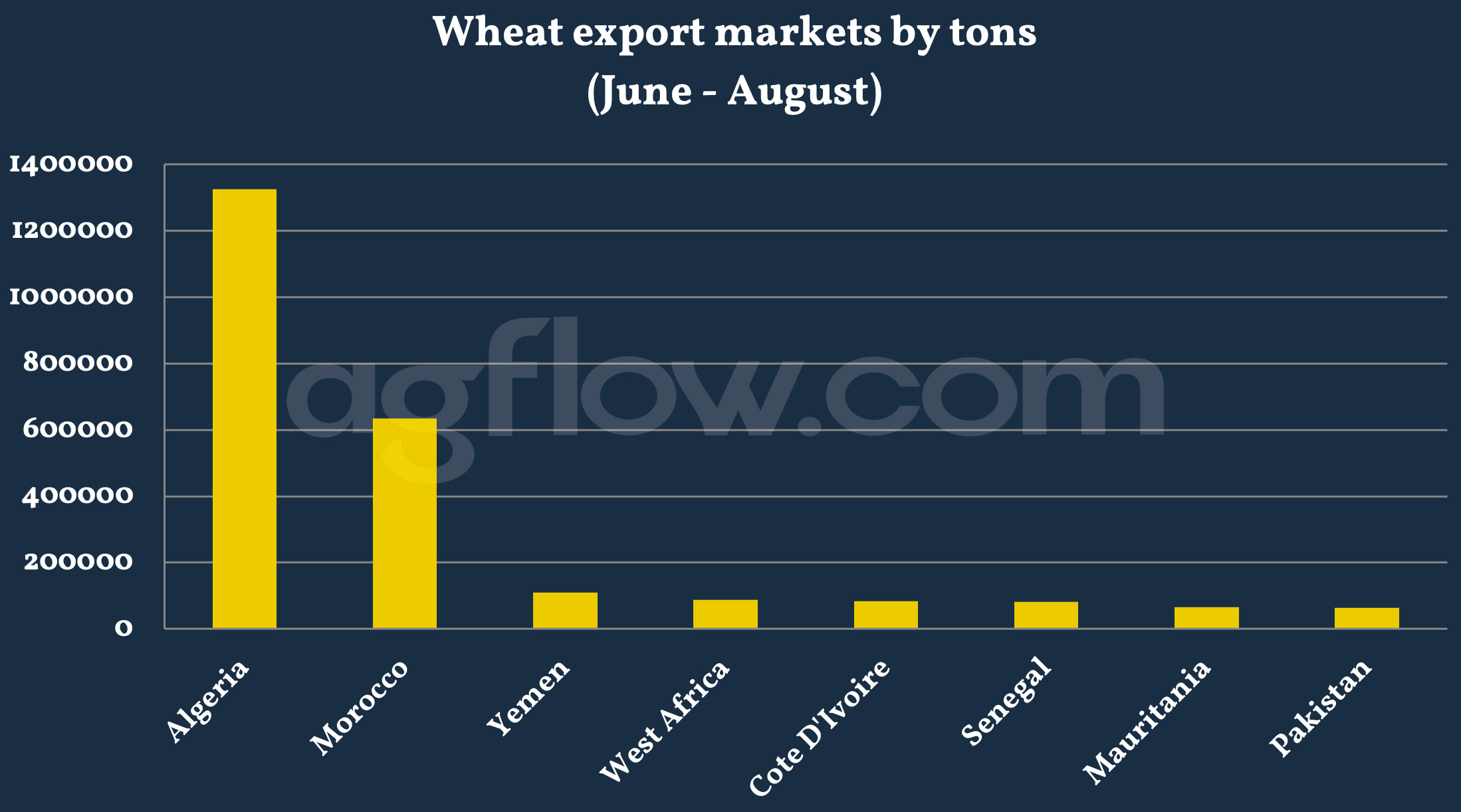 Agricultural analysts say: If this demand supports French prices, it is not certain that this momentum will continue. However, this does not necessarily mean that demand will be cut by a price increase. France could instead see demand captured by Russia, whose harvest is expected to be at a record level. This should encourage downward pressure on world prices. But European prices probably have more resistance to the downside given the strain on European Wheat and maize balance sheets.

In addition to its plethoric production, Russia’s aggressiveness could be reinforced by the large part of its harvest suffering from a relatively low protein content. This places it in direct competition with French Wheat. Already, Russian Wheat with 11.5% protein has seen its price fall in recent weeks, to now offer a discount of 20 US$/t in Fob price compared to Fob Rouen. The physiognomy of prices will now largely depend on the ability of Russia and, to a lesser extent, Ukraine, to export their surpluses in a complicated logistical context.