In MY 2022/23, Colombian Corn production is forecast at 1.5 million MT, with an estimated harvested area of 380,000 hectares (ha). While the expected fertilizer shortage from disruptions in supply chains caused by the Russian invasion of Ukraine did not materialize, reductions in area planted, rising production costs and interest rates, and adverse weather conditions will prevent more significant increases in Corn production.

Colombian Corn production is divided into modern production, which includes medium and large industrial farms, and traditional production, comprised of small landholdings. According to the Colombian Association of Cereal and Legume Producers, approximately 80 percent of Colombia’s total Corn production is from modern, hybrid seeds with an average yield of 5.7 MT/ha, while traditional Corn crops are primarily for household consumption with an average yield of 1.8 MT/ha. In calendar year (CY) 2021, Colombia planted 142,974 hectares of genetically engineered Corn, a record year at 31 percent more than CY 2020.

Excessive rains and cloudiness have continued in some Corn-producing regions due to the La Niña weather phenomena. According to a recent report from the Colombian Institute of Meteorology (IDEAM), rainy weather conditions are forecast to occur with an 80 percent probability in the last quarter of 2022. In addition, the area planted will slightly decrease as some farmers are expected to shift to produce rice instead of Corn, as rice prices have started an upward trend in recent months compared to Corn prices.

The rising demand supported increases in pork and poultry production which are estimated to grow yearly by 7 and 6 percent, respectively. According to the Animal Feed Chamber of the National Association of Industrialists (ANDI), Colombian animal feed production increased 5 percent annually in the last five years to reach 9.6 million MT in 2022. This increasing animal feed production requires more imported raw materials, such as Corn, to support the rising production of pork, poultry, and other animal proteins. Poultry consumes 65% of animal feed production, followed by pork (16%) and beef and dairy (9%). 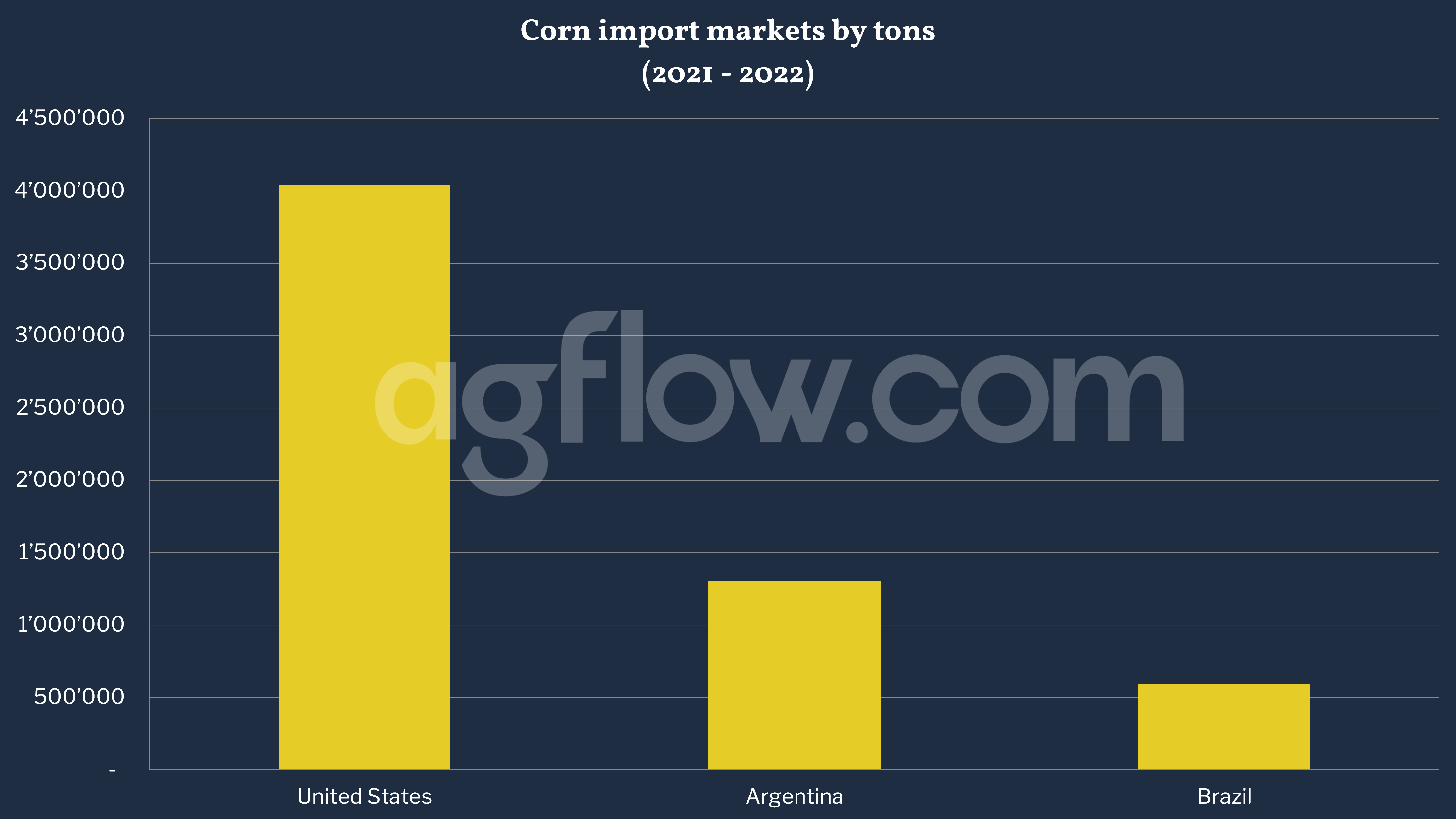 In MY 2022/23, Corn imports are forecast to increase by 5.8 percent to 6.4 million MT. This is driven by higher-than-estimated import volumes from the previous marketing year. While Colombia’s animal feed production increased, more than 95 percent of Corn imports are destined for animal feed, with the remaining 5 percent for human consumption. Only about 10 percent of Colombian production is for animal feed, while 90 percent is for the food processing sector, necessitating increasing imports to feed the demand of the local livestock industries. U.S. Corn’s market share is not expected to grow beyond 70 percent of total imports (4.5 million MT) in MY 2022/23. Grain importers are highly price-conscious.

Although the United States continues to be the main sourcing option for Colombian importers of Corn due to trade preferences in the U.S.-Colombia Trade Promotion Agreement (CTPA) and strong trade relationships with some grain importers, U.S. market share continues to be affected by South American imports due to competitive prices and preferential treatment granted to Mercosur countries (Argentina and Brazil) under the Andean Price Band System (APBS). According to the AgFlow data, the US led their import market with 4 million MT in 2021-2022, followed by Argentina (1.3 million MT) and Brazil (0.6 million MT).

Read also : Did War Affect the US Corn Industry?