As a result of the application of advanced technologies and the improvement of farmland infrastructure, it is estimated that the Corn yield per hectare is 6,410 kilograms, up 2% over the previous year. Also, favorable meteorological conditions in the Northeastern production areas contributed to the growth of Spring Maize, combined with suitable soil moisture in most production areas. The total output is projected to be 273 million tons.

China’s Corn planting area will be 42,524 thousand hectares in 2022/23, a decrease of 800 thousand hectares compared with the previous year. In H1 of 2022, the domestic Corn market showed a trend of stability first and then rising. The local spot market was stable also at first and then fluctuated strongly. At the end of June, the surplus Grain in Northeast China was relatively small while relatively large in North China comparatively y-o-y.

The demand for deep processing remains relatively stable. Still,  the demand for feed is weak, the proportion of Corn added to the feed mixtures decreases, and most feed companies adopt the strategy of purchasing on demand.

According to the National Bureau of Statistics, the market price of Corn in the circulation field in May 2022 was 2,784 yuan/ton, an increase of 2% month-on-month. As of June 30, the settlement price of the main Dalian Corn contract was 2,792 yuan/ton, an increase of 97 yuan/ton from January 2022. It is projected that the domestic Corn market price will remain at a high price range. Additionally, the price of Wheat has risen at a high level, and the expectation of Wheat as a substitute for Corn feed consumption has been reduced. The Corn price was 253 yuan/ton lower than Wheat.

The arrival cost of Corn in Nangang was relatively high, but the market demand was weak, and it could not undertake high-priced Corn, and the immediate profit continued to be inverted. Nangang’s Corn-related substitutes have sufficient stocks and have a price advantage. In order to save costs, feed companies often use imported Corn, Sorghum, or an appropriate amount of Barley, which inhibits domestic Corn’s purchase demand for downstream feed companies in the South and restricts the Southern port. Corn feed consumption is lowered by 1 million tons to 186 million tons.

In terms of imports, high international Corn prices will inhibit China’s Corn imports. Considering the above factors, the after-tax CIF price of imported Corn this season will increase by 150 yuan per ton this summer.

According to the AgFlow data, the US supplied 9.5 million tons of corn in the sea shipment period of January- early July, followed by Ukraine (2.7 million tons) and Brazil (0.5 million tons). In terms of Sorghum, the US led the import market by 4.6 million tons. As per the data of China Customs, the total amount of domestic imported Sorghum was 5 million tons between Jan-May 2022. 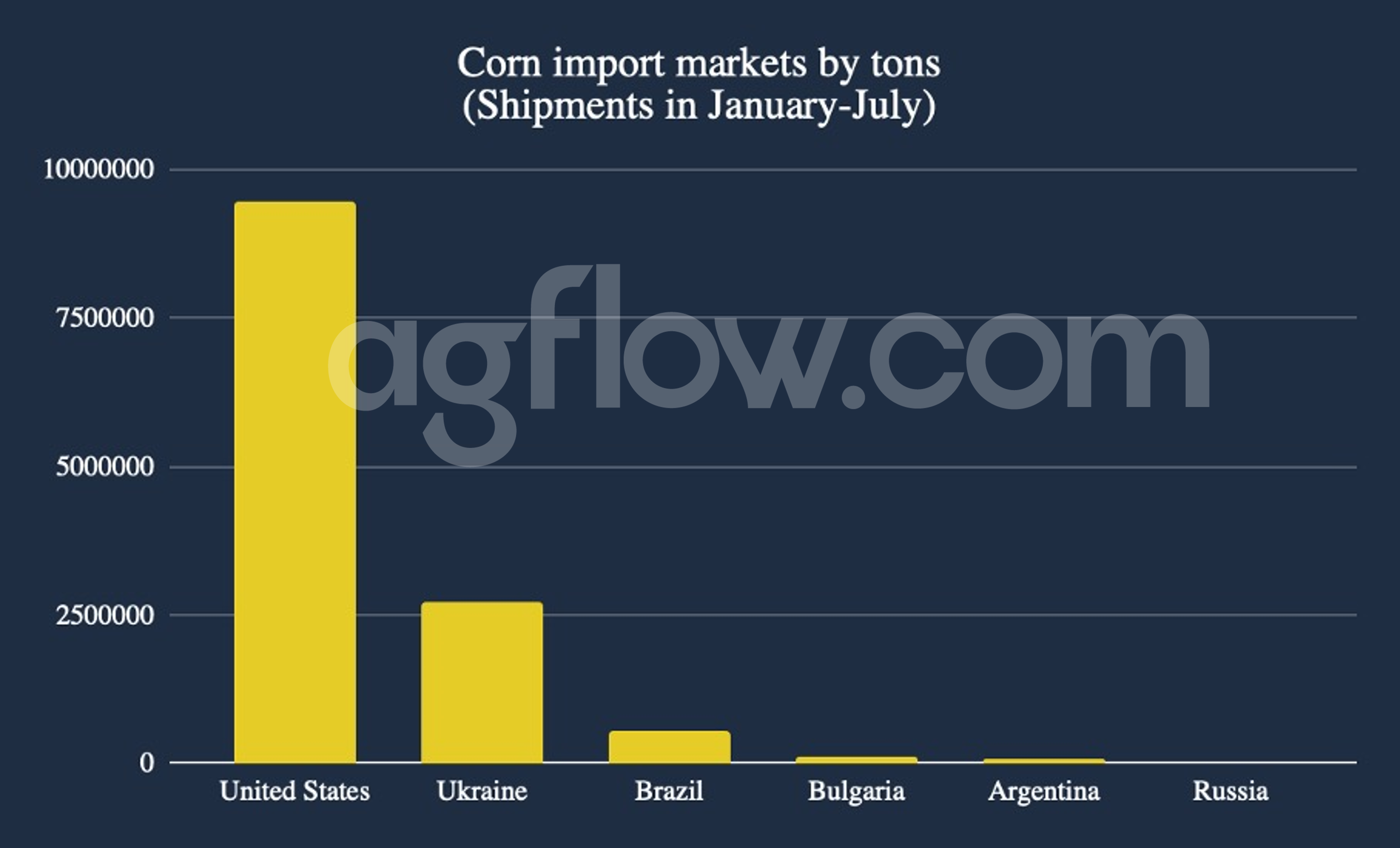 Although the spot profits continue to be down and the short-term spot sales are at a favorable price, the volume of shipments from the North port has been maintained at a high level, and the arrival volume of the South port is relatively sufficient.

The estimated total consumption of Corn is 291 million tons, an increase of 1% over the previous year.

Pig farming has continued to lose money, affecting the enthusiasm of farms (households) to replenish the stock. At the same time, high raw material prices squeeze the profit margins of Corn deep-processing enterprises, and some enterprises reduce Corn purchases. In January-June, the total consumption of Corn for deep processing totaled 27.7 million tons, up 11% year on year.

Track Corn, Barley & Other Feed Cargos to China From Up to 12 Origins