In the first half of 2022, the overall supply and demand of the Chinese Barley market were weak, and the market supply continued to be tight, which formed strong support for prices. The shipment speed has slowed down significantly due to Covid-19 restrictions. These have caused shockwaves in the market. Hence, the purchase of Barley by feed companies has remained low. Brewing companies only maintain safety stocks, making it challenging to increase demand.

As of July 1, the imported Barley inventory in Guangdong ports was 115,000 tons, an increase of 19,000 tons from the previous week. This is the first rebound since the continuous decline in inventory at the end of April, but it remains at a low level.

According to the AgFlow data, Argentina is leading their import market by 690,845 tons in the sea shipment period of January- early July, followed by Australia, Canada, France, Uruguay, and Ukraine. The volume remained low for China exports, with a cumulative export of 5.8 tons from January to May, down 67% year-on-year. The export destinations are the United States and Hong Kong, accounting for 68% and 32%, respectively. 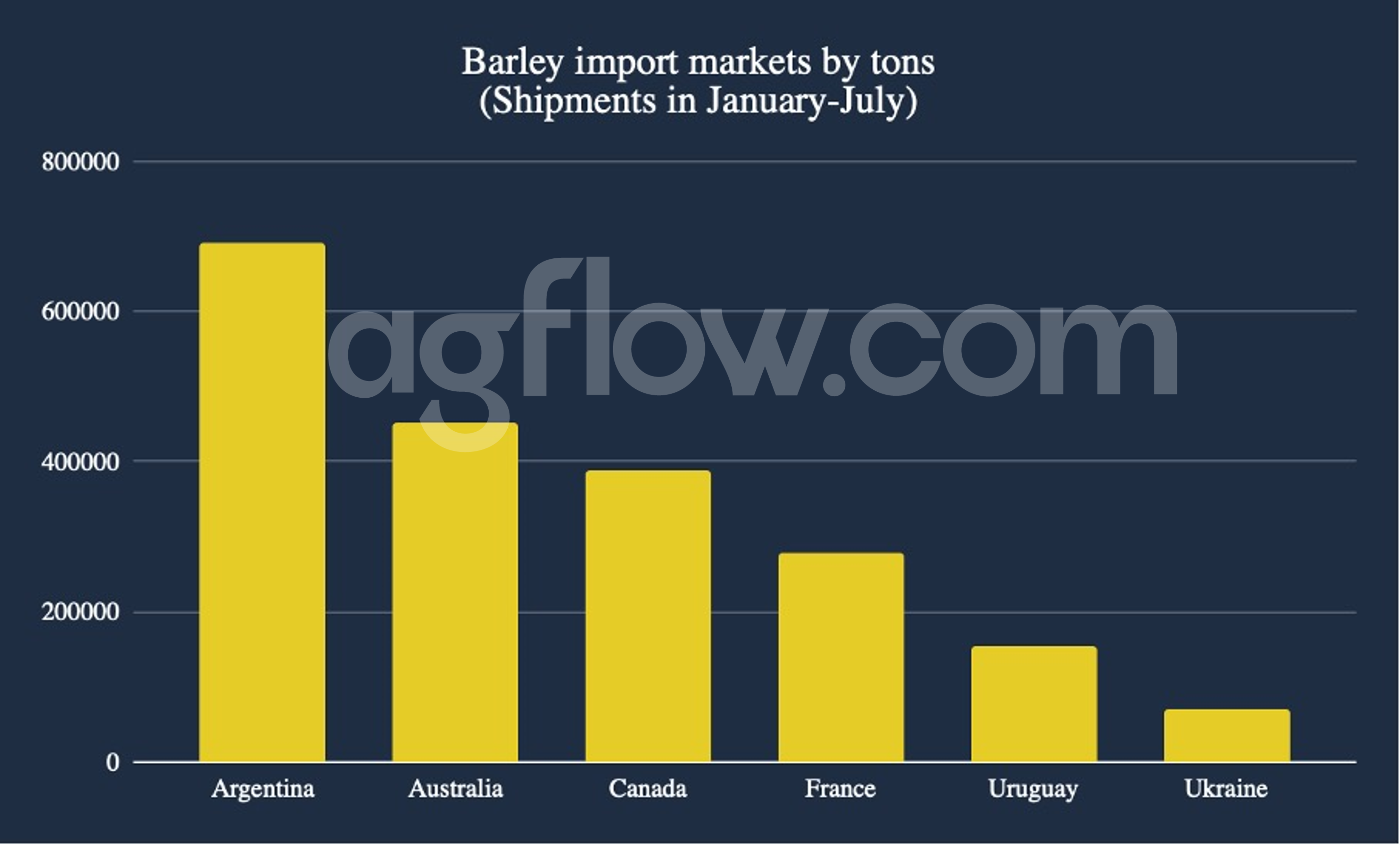 Chinese Barley import dependence is high, easily affected by fluctuations in the international market, and domestic prices generally follow the trend of external markets. In the first half of 2022, the cost of imported Barley showed a fluctuating upward trend.

There were two significant increases. The first time was at the end of February. The main reason was the conflict between Russia and Ukraine, the rise in shipping costs, the shortage of domestic supply, etc.  The second time occurred from late May to early June. The main reason was that the breweries made a small amount of centralized replenishment, the inventory was low, and the Grain merchants generally held up the price.

On the other hand, the terminal demand for feed was weak, which contradicts high prices and the epidemic situation in many places. It is difficult for brewing enterprises to ship goods and purchase cautiously. In the second quarter, the prices of the North and South ports started differentiating sensibly. The traders in the North port had a strong price-preserving attitude and continued to rise slightly. The momentum in the South port was somewhat reduced, as the domestic Wheat harvest momentum spans from South to North in the new season.

Entering July, the beer industry demand for raw materials is off-season. The ports continue to be in short supply, and traders have a solid mentality to raise prices, being cautious about forward orders.

The upstream and downstream participants in Barley have a robust bullish atmosphere. After the launch of new Grains, the opening price is much higher than in previous years. As a result, it is expected that the price of Barley will continue to show a mainstream and stable trend in the second half of 2022.

Track Barley Cargos to China From to Up to 9 Origins