Market Early Warning Expert Committee of the Ministry of Agriculture and Rural Affairs of China estimated this month that the country’s edible Vegetable oil production would be 28 million tons in 2022, down 150,000 tons from the previous month’s estimate. China’s refined edible Vegetable oil production reached the highest level in 2016 and has shown a general downward trend since then.

It is related to the decrease in the import volume of edible Oilseeds and the output decline of Vegetable oil. But, due to the significant increase in the output of domestic Rapeseed, local consumption would be 36.3 million tons.

By the end of May, most of the main producing areas of winter Rapeseed in China have been harvested, and the harvest in some areas such as Jiangsu and Southwest China is coming to an end. The weather conditions in most producing regions are good, which is conducive to the harvesting and drying of Rapeseed.

The National Grain and Oils Information Center predicts that this year’s Vegetable oil imports will drop by 6.1% from a record level of 11.9 million tons, but still higher than the average level of the past three years. Among them, Palm oil imports would be 7 million tons, an increase of 180,000 tons compared with the previous year.

According to the Customs data, China’s edible oil imports in June were 254,000 tons, down more than 20% month-on-month and 75% year-on-year, reflecting weak demand in the catering industry. China mainly imports Palm oil from Malaysia and Indonesia Soybean oil, and Sunflower oil from Argentina and Ukraine.

As per AgFlow data, Indonesia has been leading the market by 184,000 tons in sea shipment in the first half of 2022, followed by Malaysia, Argentina, Ukraine, and Brazil. The top 2 players’ exports include Palm kernel oil, Palm fatty acid oil, and Coconut oil. 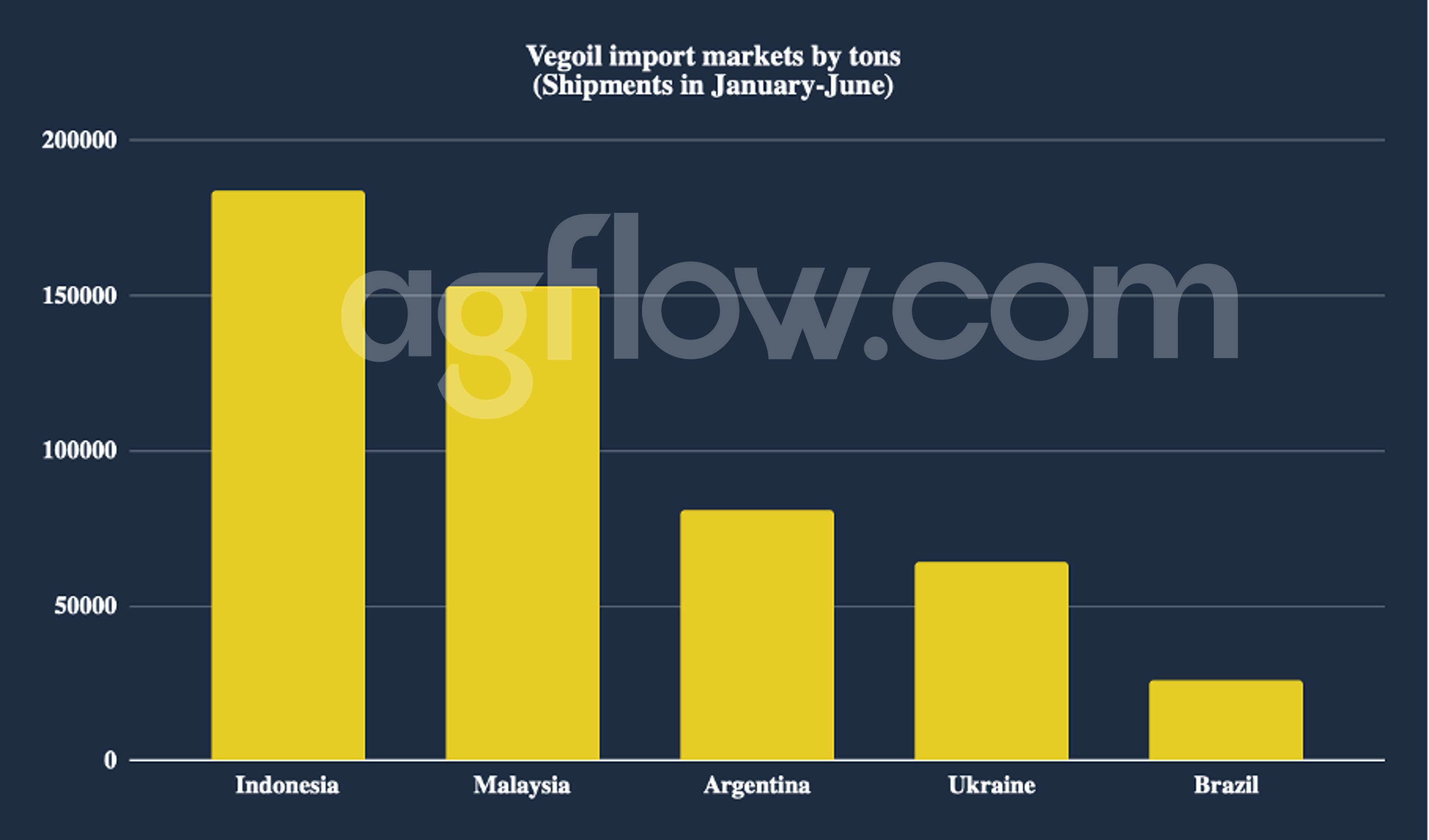 The industry sources said that with the continuous decline in the self-sufficiency rate of oil plants and the increasing dependence on foreign countries, the domestic oil industry is squeezed by the cost floor and the price ceiling, and the profit margin is getting smaller and smaller. In terms of pricing, compared with the sharp fluctuations in global edible oil prices, domestic edible oil prices fluctuate less.

In 2021, China imported about 10 million tons of Vegetable oil, and demand is expected to grow in the next few years. However, the process of importing Vegetable oils to China remains extremely complicated.

Import firms must submit to the General Administration of Customs China (GACC) a Certificate of Analysis (COA) for all imported Vegetable oil consignments. This requires verification of whether the product complies with China’s national food safety standards, and imported Vegetable oils need to be tested for the presence of additives (GB2760), mycotoxins (GB2761), pollution sources (GB2762), and pesticides (GB2763).

Vegetable oil importers must also provide a list of vehicles/vessels used to transport the first three shipments and their carrying restrictions. All accompanying documents, including China Customs’ Exporter Registration Form and related food safety certifications, must be submitted to the GACC before arranging shipment to China.

There have been cases where a ship carrying Indonesian Palm oil liquid was short of some tons. These were because the oil’s density was higher at the loading port than at the discharge port.