Argentina is one of the largest countries in the world. That large extension determines the existence of a wide variety of climates, soil types, vegetation, and landscapes. The country is also known for its most fertile soils in the world, especially those located in the Pampean Region. This rich soil is one of its greatest assets of Argentina and gives the country the capacity to produce food for more than ten times its current population. Argentina has quite a low share of global crop and grain production, which is only 3%, although its importance is growing in terms of global exports, contributing 10% of the total.

In the crop season of 2020/21, Argentina barely achieved its best performance since 2013/14, positioning itself as the second-best crop on record. The fruitful leap of 18% in the previous crop season was accompanied by improved demand, essentially from domestic use. However, the supply growth was higher, with the 2021/22 crop season having initial stocks of 1.2 million tons.

Last winter, Argentina crop producers changed their commitment to Barley and covered 1.3 million hectares with the cereal, 5% more than the area designed for Barley in the previous crop due to some reasons, such as increased global price and sustained growth in domestic demand for malt. In the marketing year of 2021/22, Barley fields are slightly lower than the previous years, mainly due to the production problems in the southern region, but this is offset by the growth mentioned above in the planted area, which will allow the production of 4.5 MMT, slightly higher than that of the 2020/21 crop season.

Therefore, a total 2021/22 production of 4.7 MMT is forecast, which stands out as one of the largest on record. It should be noted that unlike other trade years with high levels of demand, the current crop season presents a higher share of domestic consumption compared to exports. As highlighted, the Barley planted area and Barley production have grown enormously in recent years. Also, one of the reasons for growth has been the demand for this cereal for animal feed and the eruption of Chinese demand. 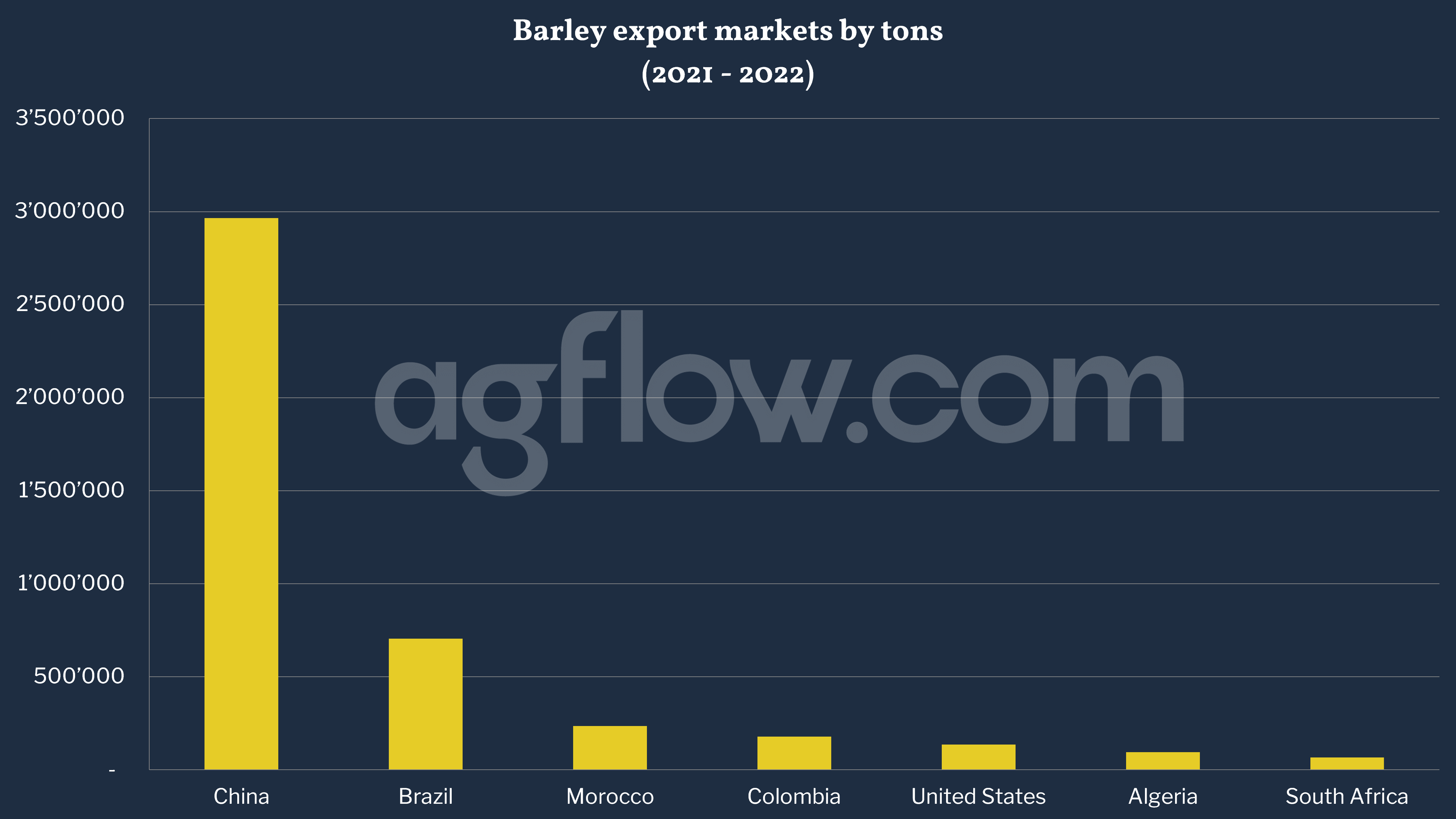 In the marketing year of 2022/2023, malting Barley and fodder Barley are forecast to see their exports increase by 28.7% and 42.1%, respectively, while malt is forecast to decrease slightly by 2.8% in its exports measured in tons. In this way, the growth of nearly US$310 million forecast for Argentina’s Barley exports is explained by a more than 63% rise in exported quantities. Argentina’s fodder Barley is massively exported to China to feed the Asian giant’s cattle. Regular malt exports are mainly to Chile and Brazil, and malting Barley is shipped to various destinations, including Brazil, China, and Colombia.

China plays a significant role in the growth of foreign trade for Argentina’s Barley. The country is the largest global importer of Barley and accounts for 31% of the world’s purchases. On the other hand, it is also crucial to consider the position of Australia, which is the largest international supplier of Barley with a global market share of 26%. However, the People’s Republic of China imposed a tax duty of 80.5% on Australian Barley in 2020, mainly as an anti-dumping measure. This situation benefitted other Barley-producing countries, including Argentina. It led to a sharp rise in Barley prices in alternative export markets such as the Black Sea, the European Union, Canada, and Argentina.

Then, the booming Chinese demand was reflected in better prices that materialized a growth in Barley production, for example, in Argentina. According to AgFlow data, China led their Barley export market with 3 MMT in 2021 – 2022, followed by Brazil (0.7 MMT) and Morocco (0.4 MMT).