Can Argentina Corn Exports Increase In 2022/23?

Argentina is a top 4 Corn exporter globally and benefitted from the conflict in Ukraine to boost exports in Q1 22. Indeed, Argentina Corn exports soared between Jan & Mar 22, increasing by 558 & 894 kmt YoY in Jan & Feb, respectively, and by ~1.4 Mmt in Mar. Despite a slow start for 22/23 in Apr, with Corn exports decreasing by 478 kmt YoY, exports have picked up since. Argentina Corn exports increased by 922 kmt in May and surged by 1.4 Mmt in Jul, thanks notably to the Brazil Safrinha Corn crop coming in Jul. As exports are picking up in Jul, who are the largest beneficiaries of the Argentina Corn supply?

Read also: Will Brazil Corn Exports Cover the Lack of Supply in 2022/23? 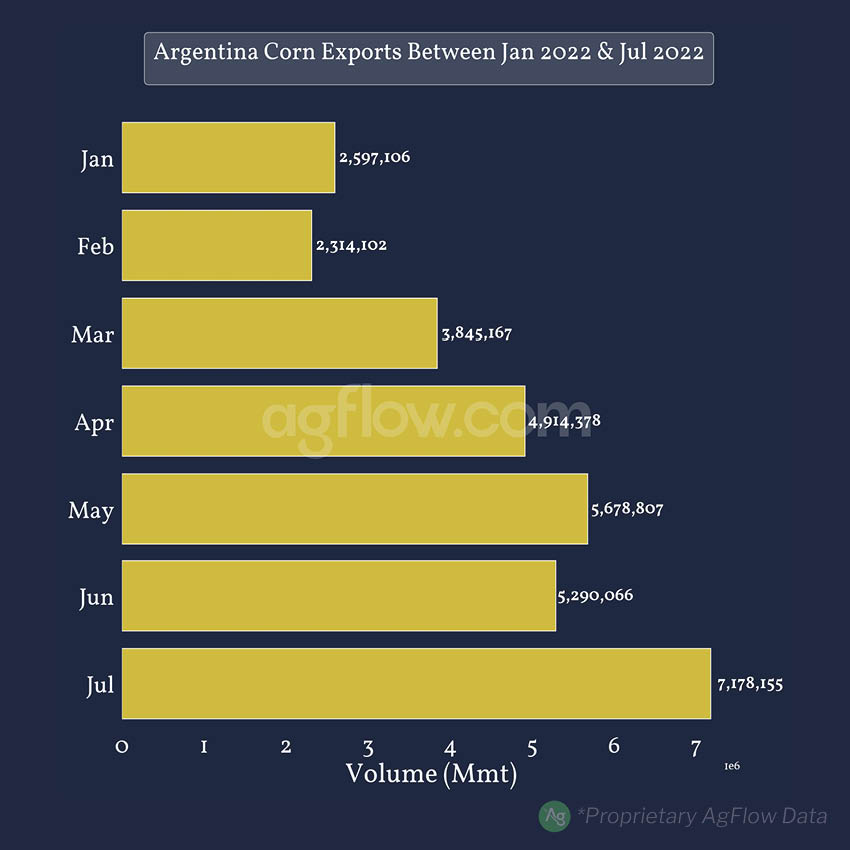 Track Corn Cargos From Argentina, Brazil & Up to 27 Other Origins

In the first months of the 22/23 season, Argentina increased Corn exports to MENA countries as they lost the Ukraine Corn supply due to the conflict with Russia. Indeed, between Apr & Jul, Argentina increased Corn exports to Algeria & Egypt by 932 & 261 kmt YoY, respectively, despite intense competition from Brazil in the region. Moreover, Argentina Corn increased its market share in Asia, raising exports to Vietnam by 776 kmt YoY, South Korea by 512 kmt YoY, and Japan by 383 kmt YoY. Additionally, much like Brazil, Argentina boosted exports to MERCOSUR member countries by 747 kmt YoY, spread between Chile & Peru. With Brazil competing in MENA, which are Argentina’s Corn competitors in Asia?

Read also: Will Brazil Corn Exports Cover the Lack of Supply in 2022/23?

Argentina Is the Most Diversified Origin for Corn in Asia

Argentina Corn competes with various origins in Asia. However, it does not lead all markets. Indeed, benefitting from trade agreements with Japan, the US remains the primary Corn provider despite exports decreasing 504 kmt YoY between Apr & Jul 22. On the other hand, Argentina increased its market share in Japan by raising exports by 383 kmt YoY. Meanwhile, Argentina thrives in Asia as it is the primary origin for South Korea & Vietnam Corn imports, boosting exports by 513 & 776 kmt, respectively. Overall, Argentina is the largest exporter of Corn in these countries for the period, increasing global volume by 1.6 Mmt YoY to a total of 6.3 Mmt. At the same time, the US exported 5.2 Mmt, and Brazil 768 kmt of Corn. 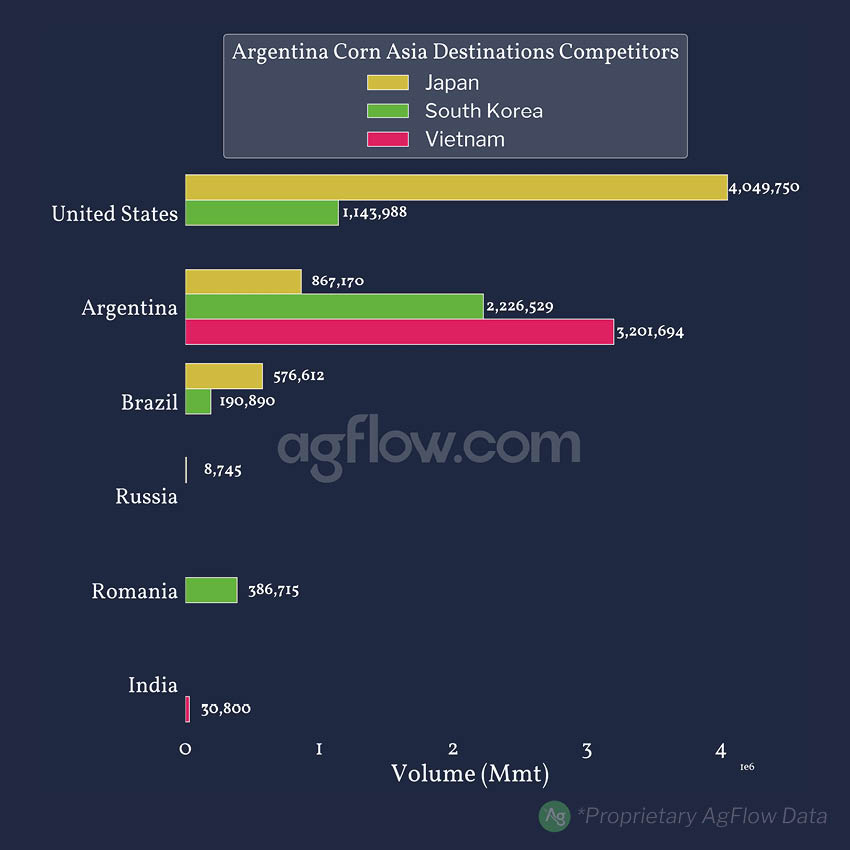 Track Corn Cargos From Argentina, Brazil, & Up to 11 Other Origins to 26

Read also: US Corn Wins Even When It Loses

As one of the top Corn producers & exporters globally, Argentina managed to increase its shipments at the end of the 21/22 season, notably due to the Ukraine conflict limiting the global Corn supply.

At the start of the 22/23 season in April, Argentina boosted exports toward Ukraine Corn importing countries in MENA, particularly in Egypt and Algeria. Moreover, due to US Corn prices being less competitive, Argentina also increased its Market share in Asia, with Vietnam and South Korea at the forefront. This allowed Argentina to be the largest exporter of Corn in the region (excluding China) so far in 22/23.

All in all, Argentina can potentially increase Corn exports globally as the demand remains strong in Asia and MENA countries. However, thanks to the recent deal signed between Ukraine, Russia, and supervised by Türkiye, Ukraine will be able to export its Grain in 22/23. Therefore, Argentina might lose its market shares in Algeria and Egypt gained since March, limiting its Corn exports. As such, Argentina will have to try and increase exports to the Asian market if it wants to outperform the 21/22 season.