Local Soybean production contributes approximately 5% of Bangladesh’s total Soybean demand. Domestically produced Soybean is used predominantly in the feed industry, while edible Oil is imported in crude form and as beans that are crushed locally. Due to the low potential yields of available Soybean varieties, Soybean cultivation was limited until recently. Of late, Soybean has been gaining popularity as a cash crop, particularly among farming households in the southern part of the country.

Since 1990, more than ten high-yielding Soybean varieties have been released in Bangladesh. However, roughly 70% of Soybean farmers are still cultivating “Shohag” – a variety officially released in 1991 but needs to be replaced with better types. Bangladesh witnessed its annual Oilseeds output double from over 0.6 million tons in 2009 to over 1.2 million tons. But, home production can hardly meet 10% of the country’s edible Oil requirement.

The remainder is imported as crude Oil or Oilseeds through spending over Tk28,000 crore a year to foot the bill. But with a massive surge in prices of both Soybean and palm Oils, Bangladesh’s edible Oil import bill was expected to reach anything beyond Tk35,000 crore in the last fiscal year. According to data from the state-run Trading Corporation of Bangladesh, the retail price of Soybean Oil (five-liter bottles) rose from Tk520 in May 2020 to Tk980 in two years. Against this backdrop, the country is now speeding up efforts to increase domestic production and cut import dependency urgently.

Officials at the Ministry of Agriculture said that a project to the tune of over Tk278 crore is underway to increase oilseeds production in the country. With a mandated project area in 250 selected regions of the country, the initiative aims at producing better-yielding seeds and providing them to farmers so that they can replace the current low-yield varieties. Only 30% of Soybean farmers are planting better kinds like BARI Soybean-5 and BARI Soybean-6, developed by the Bangladesh Agricultural Research Institute. The Bangladesh Institute of Nuclear Agriculture (BINA) and Bangladesh Agricultural University also released several high-yielding Soybean varieties, but planting is also limited.

Overall, the unavailability of high-yielding varieties and a lack of quality seeds hamper the expansion of Soybean cultivation in Bangladesh. Agriculture officials in Dhaka said the project would help more farmers have access to high-performing Oilseed varieties.

In Bangladesh, competing crops limit the available area for Soybean cultivation. Soybean competes with crops like winter rice (Boro), watermelons, sunflowers, and peanuts in the river basin islands (char land) of the southern coastal region of the country. Char land can be used for Soybean cultivation because of the relatively low levels of water availability and increased salinity in the late winter. 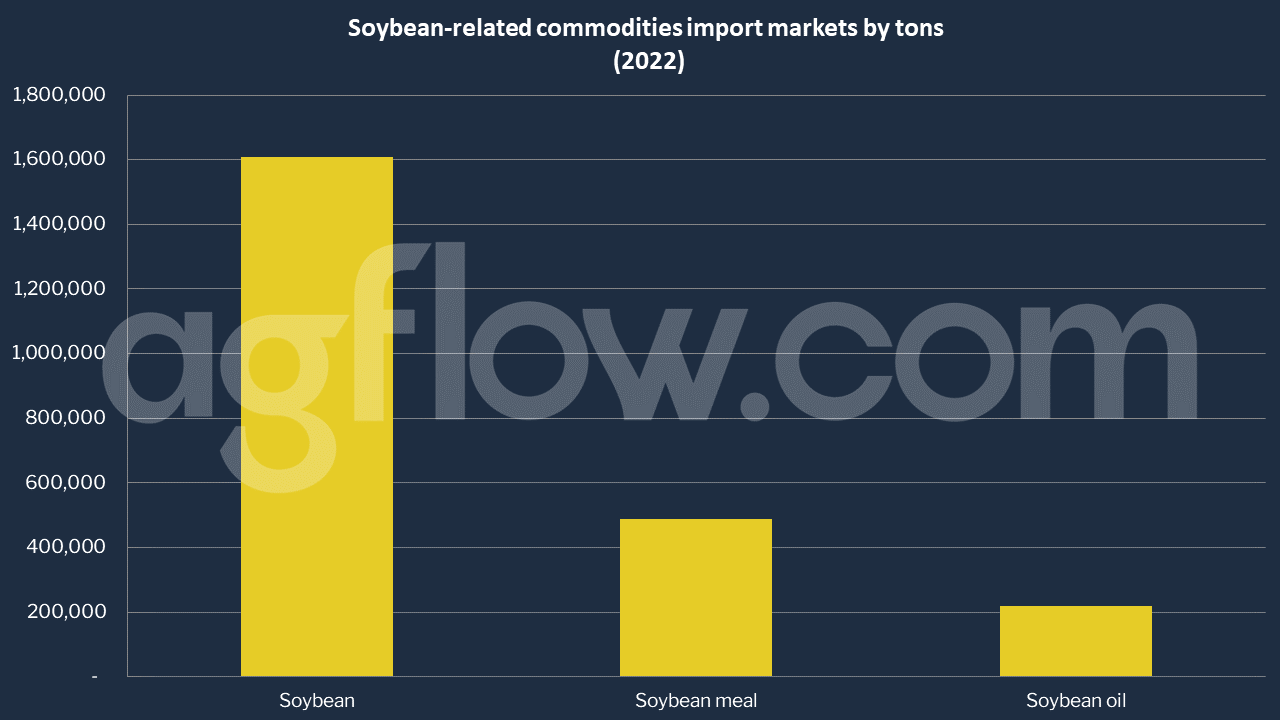 According to USDA estimates, Bangladesh’s Soybean imports for 2021-2022 stand at 2.6 million tons, and Soybean Oil imports at 0.7 million tons. There are about 80 Soybean Oil refineries in Bangladesh that import crude Soybean Oil and refine it for the domestic market.

In the last fiscal, as per AgFlow data, Brazil shipped 0.9 million tons of Soybean to Bangladesh in 2022, followed by the United States (0.6 million tons) and Canada (81,000 tons). The total import was 1.6 million tons, while Soybean Meal and Soybean Oil import volumes were 0.5 million tons and 0.2 million tons, respectively.