Barley in Saudi Arabia is mainly used for feed. SAGO expects the size of the Barley market in Saudi Arabia to stabilize at around 4–5 million metric tons (MMT) per annum. Saudi Arabia’s Barley imports for the first six months of Marketing Year (MY) 2021/22 was estimated at 2.36 MMT, a 41 percent decrease compared to the same period of the previous year. According to local importers, the decline in Barley imports was caused by a shortage of vessels delivering competitively-priced Barley and a decrease in overall domestic demand.

Eligible small-scale farmers can apply for financial support depending on their implementation of efficient feeding practices. However, over the past several months, numerous farmers departed the livestock sector due to increasing costs, thus lowering demand. As a result, the USDA’s projection for total Saudi Barley imports for this MY 2021/22 was 5.2 MMT, down 16 percent compared to the USDA’s official estimate of 6.2 MMT for MY 2020/21.

Saudi Arabia is also moving to free up its internal market in Barley, with prices responding to market forces. The Saudi Barley market is being liberalized, and this will open Barley purchasing to more exporters. Instead of a single, state-related purchasing organization, imports will be purchased by 10–15 private sector entities. Change is not confined to imports. The way that Barley is distributed within the kingdom is also being liberalized. In January 2020, Saudi Arabia canceled all direct feed subsidies and moved to supply Barley at market prices. 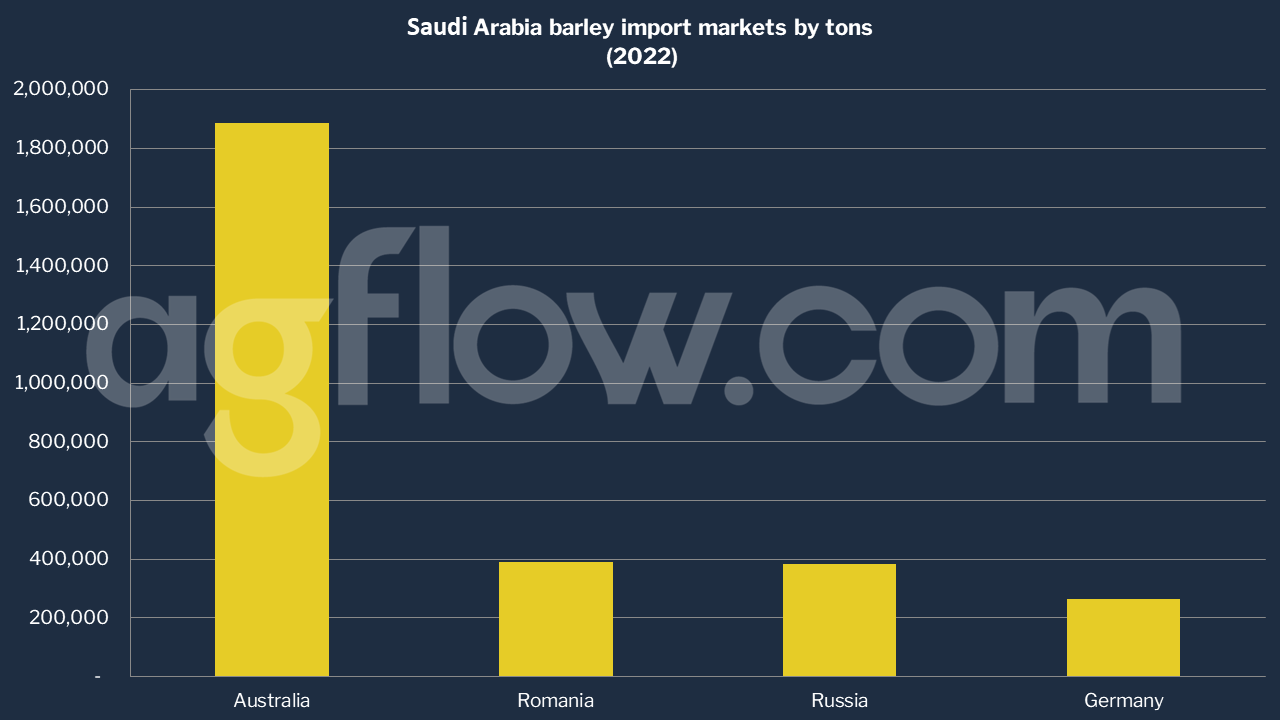 Australian produce has a market advantage. According to SAGO, Australia’s Barley is well regarded in Saudi Arabia owing to the product’s quality, the grain’s unique color, and the efficient handling and shipping logistics from Australia.

Until 2014, Saudi Arabia was a significant market for Australian feed Barley. However, as Chinese Barley import prices increased, Australian traders shifted output away from the Middle East. Since then, high prices from Australian suppliers have limited the amount of Australian Barley entering the Saudi market. The new import model should help Australian exporters find more competitive export price points.

Shipping issues should also ease. According to SAGO’s General Manager of Grains, shipping prices from Australia are competitive with costs from other markets. Currently, SAGO receives shipments in Panamax vessels with a capacity of 60,000 tons. With private companies taking over imports, it is likely that the 10–15 companies that are licensed will consider a variety of shipping options. This includes the potential for shipments in smaller vessels.

Austrade advisors in the capital, Riyadh, said that greater flexibility would create more opportunities for mid-tier and smaller exporters from Australia. This includes the potential for smaller shipping orders. Austrade will work with SAGO and industry experts to provide a briefing on the Australian Barley sector to existing and potential importers and continue to assist Barley exporters by helping them identify opportunities. Austrade will also provide in-market advocacy.