Australia Barley Market: Where Do You Export When China Boycotts You?

ABARES latest report of Australia Barley Market forecast its all-time second-largest crop in 2021/22. The Australian Barley export market faces global competition, and particularly from Ukraine and Canada with their large supply. However, the fact that China has been boycotting Australian agricultural products has been challenging exports since 2020. In December 2020, we covered how Australia diversified its Barley export pipelines following the trade war waged by China. Did Australia continue this dynamic in 2021, and where will export opportunities be in 2022?

Jump to conclusions: 3 Things You Should Track If You Are Exporting Australia Barley in 2022

Here’s Why Australian Barley Is Priced Too Low in 2021/22 v. Global Markets

The Australian Barley market is currently the most competitive against global competitors, thanks to the large crop forecasted, allowing for more supply and a higher ending stock available in 2021/22, leading to the least expensive Barley available on the market. Additionally, the recent rain and flood events due to La Niña first led to some incertitude about the supply and crop quality downgrades, which will not impact the total supply overall (farmweekly.com). Still, it may diverge some premium quality crops towards feed instead. 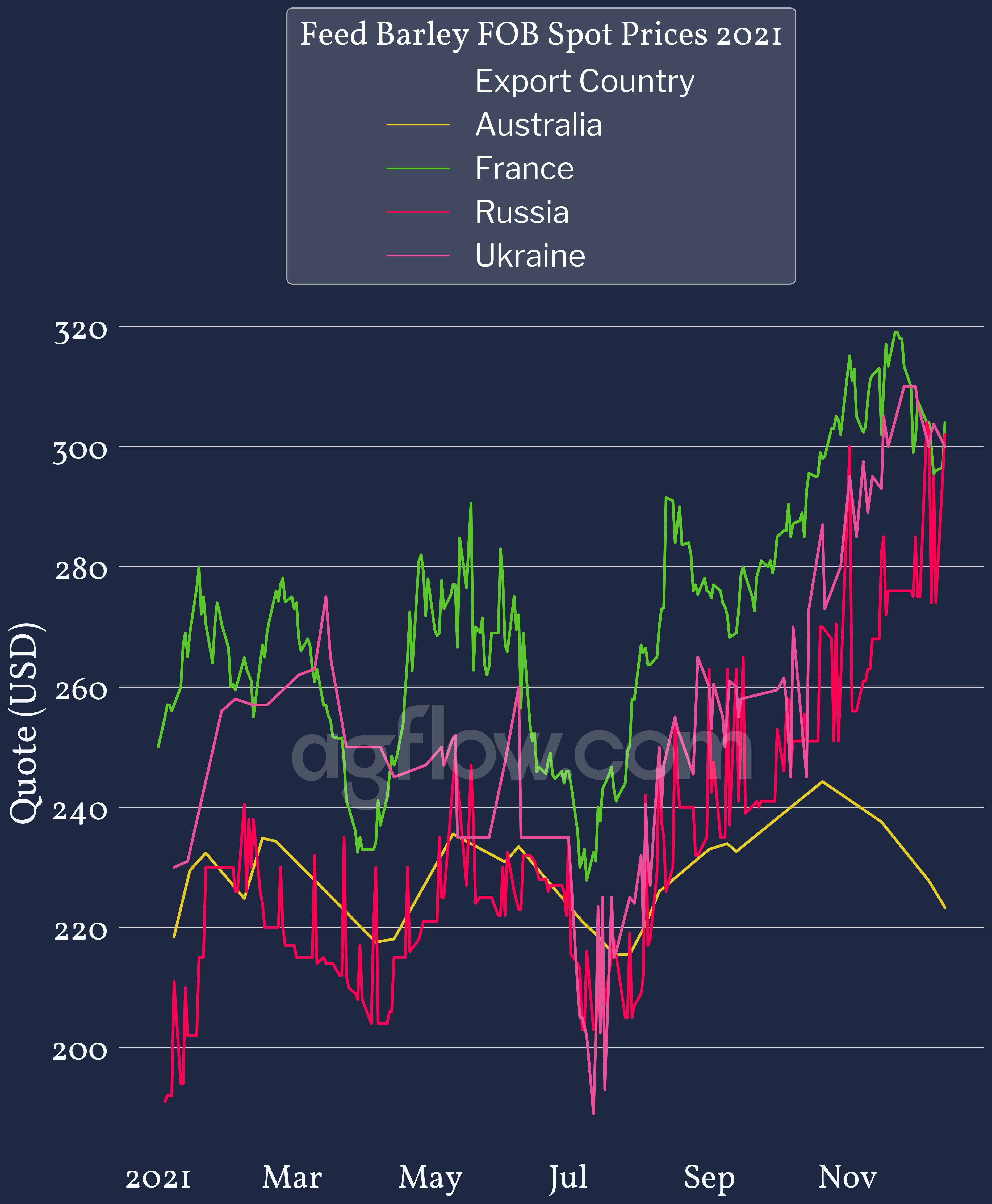 Feed Barley FOB spot prices displayed in Figure 1 show that Australia Barley was priced competitively in comparison to other origins throughout 2021 until the new 2021/22 crop came out of Europe and the Black Sea region. However, the great demand for Feed products from China, and the lower EU crop (represented by France in the plot), contributed to the bull trend in the Barley market from July 2021 onwards. Moreover, the ever-increasing Russian export tax on grains also bolstered the Black Sea market prices, showcased in the noise displayed in Figure 1.

Meanwhile, Australia Barley FOB prices rose under the effect of the global bull market but decreased rapidly in light of the crop forecast reports.

Read also: Here is Why Turkey and Iran Grain Imports Surged in August 2021 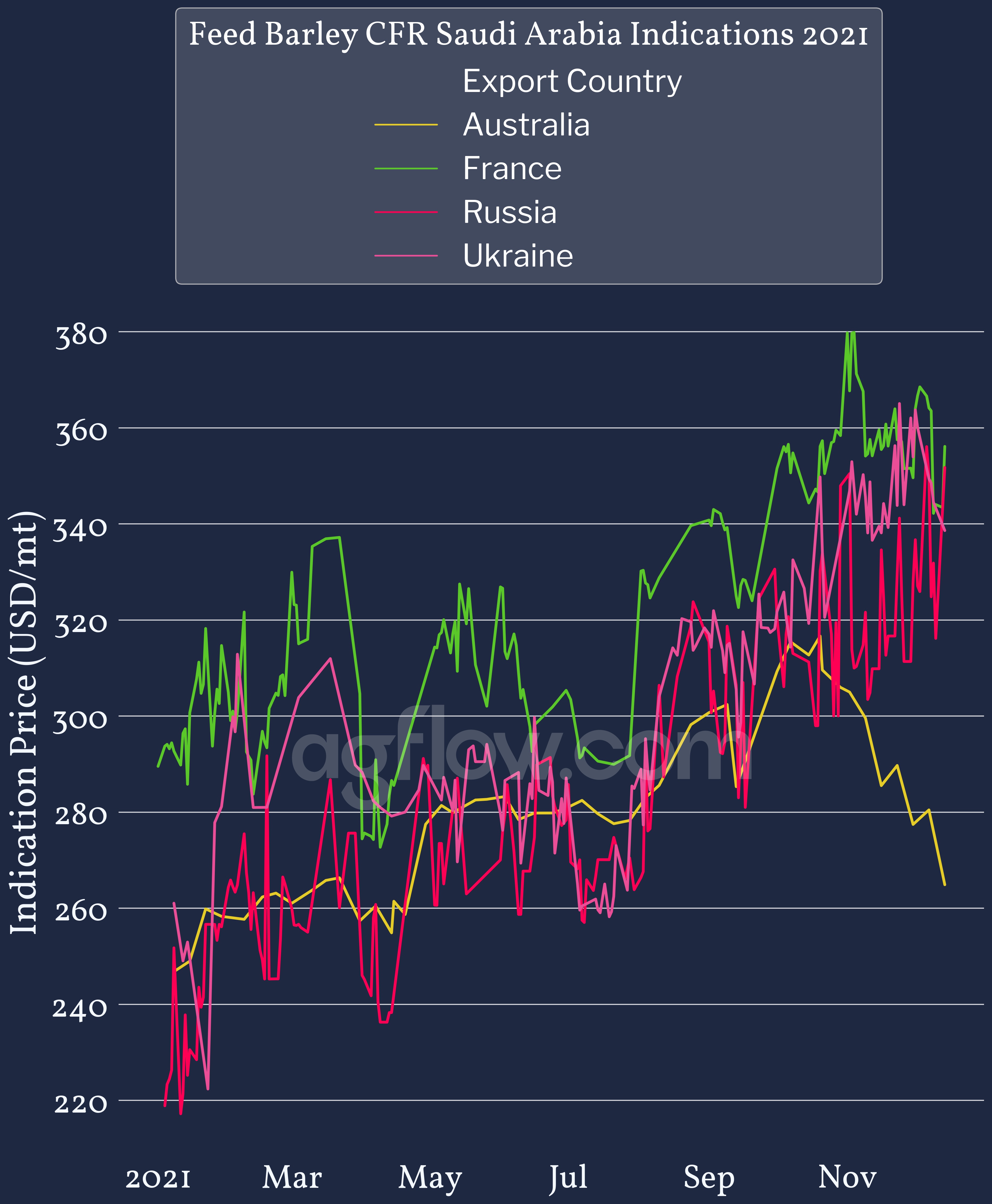 The Feed Barley CFR Indications displayed in Figure 2 help represent the trend of CFR prices. Thanks to its location, Australia has the most competitive cost and freight prices to China (Plot 1) and Indonesia (Plot 2). However, for Egypt (Plot 3) and Saudi Arabia (Plot 4),  the freight cost helped keep Australia Barley export market prices in line with the other origins. Still, by the end of October 2021, the pricing of the crop drove the CFR indications to decrease.

Therefore, the Australian Barley market is overly competitive compared to other origin countries due to its large crop pricing. Moreover, the freight market correction over the last few months contributed to CFR prices dropping. And since China boycotts Australian agricultural products, it depends on Europe, Ukraine, and Canada (with other origins like Argentina). The increasing demand for these origins and the lower demand for Australia also contributed to driving prices oppositely. Our partner at TEM also previously highlighted the impact of China tariffs on the pricing of Australia’s main crops in an article available on AgFlow.

Access +8k Barley Monthly Cash Prices From Australia, Ukraine, & Up to 31 Other Origins

As the Australian Barley export market cannot count on Chinese demand, it had to diversify its export pipelines. Similarly, China also had to rebalance its Barley sourcing after applying tariffs on one of the world’s largest Barley exporters. 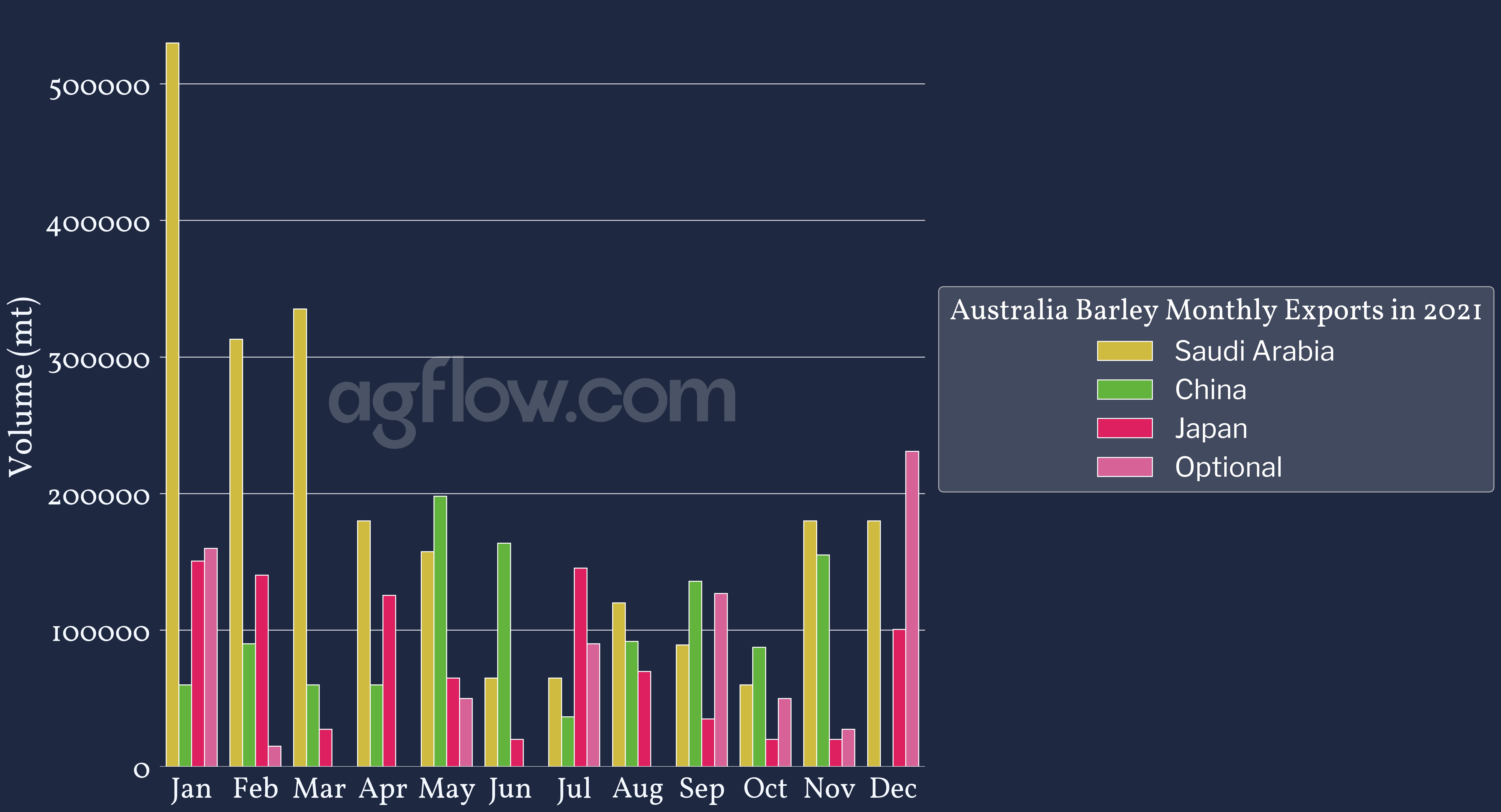 Australia Barley export volumes for its top destinations in 2021 displayed in Figure 3 show that China remained one of the primary importers of Australian Barley, and is in fact, the second largest one in 2021 behind Saudi Arabia. On the other hand, Saudi Arabia, which requires bread-making quality Barley, became an important—although inconsistent—pipeline in 2021. Saudi Arabia’s newly found position was a direct result of the trade war imposed by China, which was the leading destination of premium Australian Barley products prior to this (graincentral.com). 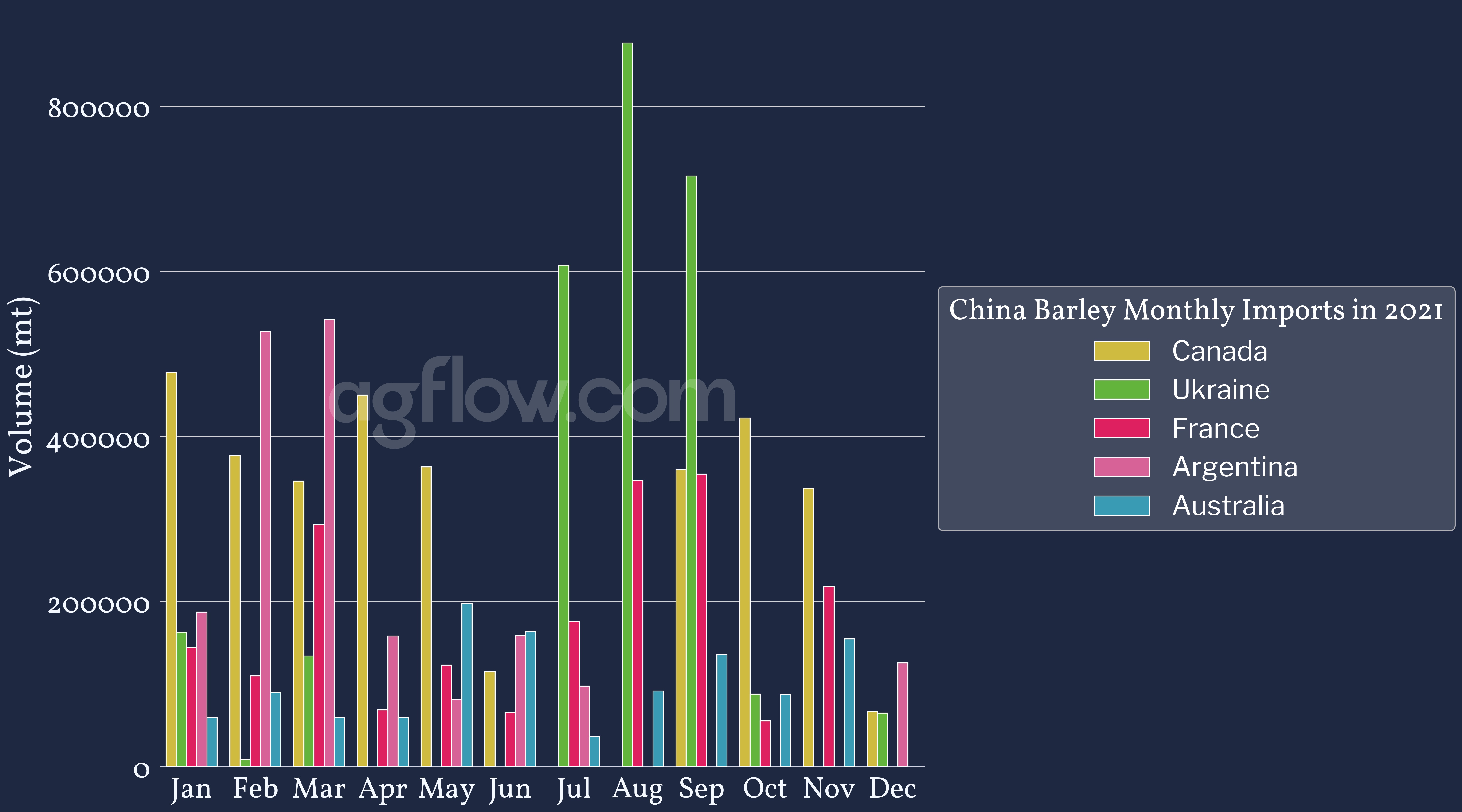 However, the 2021 Barley import volumes in China displayed in Figure 4 show that Australia, while remaining in the top 5 origins,  was not a significant part of China’s Barley sourcing strategy. China thus relied heavily on Canada, probably for premium and malting purposes, while France and Ukraine helped cover gaps in animal Feed needs, thanks to lower prices (Reuters). Thus, China relegated Australia to a filler position, as imports from the land down under only topped other origins in June 2021 with about 164 kmt, also the peak volume for this origin. Therefore, although the Australian Barley market diversified its export pipelines, losing the unmatched Chinese demand is not balanced by Saudi Arabia.

Track +170 Barley Vessels Monthly to China, Egypt, & Up to 68 Other Destinations

Australia Barley market prices in 2021 are overly competitive with other global Barley origins due to a lack of Chinese demand created by import tariffs since 2020. Additionally, prices decreased even more in Q4 2021 in light of the estimated Barley supply for 2021/22, the second-largest ever.

Due to this trade war waged by China, Australia diversified its export pipelines. Saudi Arabia caught this opportunity to seize the premium Australian Barley crop, usually destined for China. However, China remained the second-largest importer of Australian Barley in 2021. On the other hand, China dropped Australian imports dramatically, diversifying instead primarily towards Canada, Ukraine, and France.

Finally, China is restricting Australian Barley imports even more in 2022 as it is tightening its surveillance with a new import system, starting in January (farmweekly.com). Thus, Australia will have to count on Saudi Arabia and Japan. Nonetheless, the full extent of the crop downgrade will be known in the coming month, which will limit Australian premium Barley export, and thus will have to rely on a strong animal Feed demand.

Read also: Rock up for the cheapest grain in the world

Although analysts remain confident, the proportion of the premium quality crop downgraded due to La Niña is not finalized yet. As Saudi Arabia and Japan rely on this quality, Australian exports could take a blow from this smaller crop available.

While freight rates are already stabilizing, Australia faces canceled shipping lines and limiting export availability as part of a global supply chain situation. Exporters are awaiting improvements in the supply chain to leverage their goods better.

Barley Feed demand might play a more critical role in 2022 for Australia with the incertitude on premium quality downgrades. Vietnam and Indonesia’s fast-growing livestock industries could represent an opportunity for Australian Barley exporters.

You Missed the analysis? Jump back to the start