The Australian Barley exports Market is in a key position in Asia due to its advantageous location. In 2020, China is the largest importing country for Australian Feed Barley and represents a large part of Australian Barley exports. Nonetheless, during the September-November period, China started banning Australian Barley exports for several reasons; namely, due to the lack of measures against shipments’ contamination; and also in response to Australia backing the investigation of China as the source of the Covid-19 outbreak at the United Nations. It resulted in the loss of a significant partner for Australia in general, and more specifically, for Barley. Thus, Australia had to adapt its strategies in order to find solutions that compensated for this loss – and did so with some success.

Australian Barley export and the ban

As China’s ban on Australian Barley exports is a recent event, there isn’t too much data to assess this ban’s long-term effects. However, we can track the direct impact on this using trade flows and the cash quotes curves from AgFlow’s dataset.

Figure 1: Australia Feed Barley Shipments in mt to China Between Jan 2019 and Nov 2020 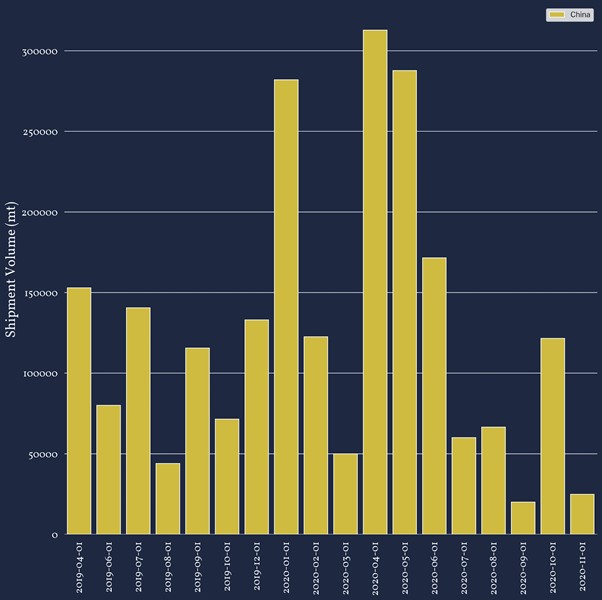 As the Barley crop harvest in Australia occurs in May and June, it is customary to see March as the tail end of the shipments and present the lowest total volume. However, the degradation of shipments volume from July 2020 onwards is significant compared to the same period in 2019, bearing in mind that Australian Barley crops were exceptional in 2020.
Another point to highlight is shipments for October 2020, which acts as an outlier for the period, but demonstrates the volumes available at the time. 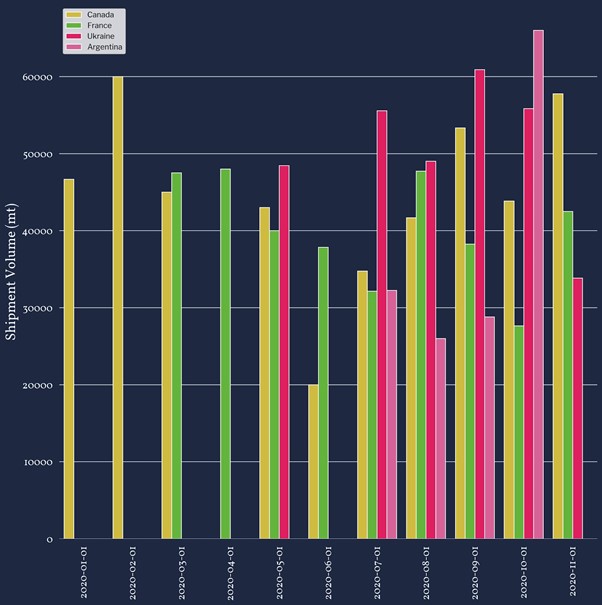 On China’s side, from Figure 2, the overall shipment volumes and origins increased from July 2020 onwards. It showcases the change in strategy operated to compensate for the loss, and the new policy towards Australia’s Barley exports. Indeed, as a short term solution, China imported from Argentina for the first time in 2020 – more than 60 kmt in November, in particular.

The ban on Barley exports from Australia is a major event for this market and undoubtedly impacts the economy surrounding the commodity. This, on the other hand, did not have a similar effect on China, which proved to be flexible with its pipeline and managed to find different origins for its importations.

The ban on Barley exports from Australia is a major event for this market and undoubtedly impacts the economy surrounding the commodity. 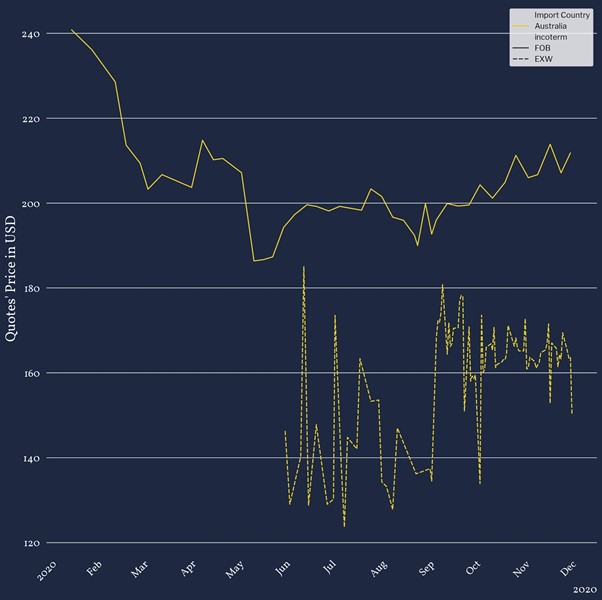 The Cash quote prices available from the dataset on AgFlow’s database, displayed in Figure 3, showed that there were quotes for Ex Works (EXW) and Free On Board (FOB) Incoterms in 2020.

Most importantly, the Australia Feed Barley FOB Australia market is bear from Jan 2020 through May 2020. From then on, the apparition of EXW products aligns with a newfound trust in the FOB market. Thus, the prices are steadily increasing, starting in August, even though China’s ban on Australian Barley exports is in place at the time.

Therefore, although the impact of the ban on Australia’s Barley exports shows on shipment volume, it is not the case with cash quotes. As China showed flexibility with its Barley pipeline, it is necessary to look at other Australian Barley export destinations to understand how Australia dealt with this event.

Australian Barley exports needed a new strategy to cope with the Chinese market loss and managed to muster this new confidence in the Barley FOB products cash quote. This new strategy relies primarily on EXW products, as well as reinforcing other export destinations.

Figure 4: Australian Barley Exports to China, Japan,
and Thailand Between Jan 2020 and Dec 2020 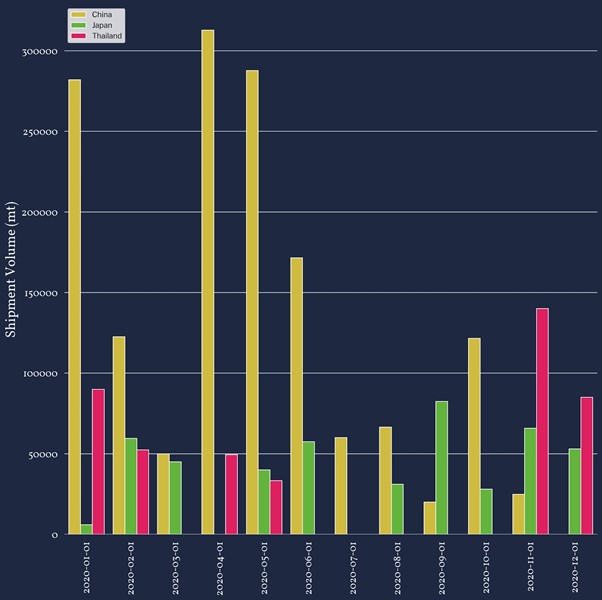 Figure 4 displays some of the top Australian Barley importers in 2020, with China, Japan, and Thailand shipment volumes per month in metric ton. The Australian Barley export volumes to Japan and Thailand increased mainly in September and November; moreover, while this data is still incomplete -it is still early in December at the time of writing this report – December 2020 already shows it will be an important month for these two destinations as well. This data is only a subset of the total number of other importing countries. And this observation also applies to other importing origins.
Hence, Australia compensated the Chinese market Barley exports with some of its other leading importers, thus showing great flexibility concerning its Barley exports pipeline.

With the introduction of a new domestic market Cash Quote product and rebalancing the Barley exports destinations’ shipment volumes, Australia seems to manage the new Chinese policies well. Nonetheless, the Chinese market represents large volumes, and rebalancing the export destinations is not enough to dump enough volumes to counterbalance the total volume of Australian Barley exports to China.

Track Barley Exports out of Australia

and from Argentina, Canada, France, Ukraine, and 11 more origins

All in all, Australian Barley exports proved to be robust. The Covid-19 outbreaks and the economic crisis that resulted from it may have had an influence on the bear market situation of the Australia Feed Barley FOB Australia Cash quotes market. However, it seems that it strongly resisted the Chinese ban policies that loomed since February 2020 and took place starting in September of the same year. The introduction of EXW cash quotes products as well as boosting Barley Exports to other leading importing countries, such as Japan and Thailand, allowed Australia to maintain a strong Barley export market.

Nonetheless, China represented the most important Barley export destination throughout the year and is the largest growing Feed Barley importer in the world. As such, it is complicated to refocus this volume on other countries. Moreover, China also showed flexibility with its importing pipeline by reinforcing its pool of Feed Barley origins, with Ukraine and Argentina, for example.

It could also be that, with the recent development and approval of several Covid-19 vaccines, the situation between both countries will improve, and China will lift the ban. Of course, that will also depend on Australia’s position at the U.N.

Read also:  Do Not Base Your Risk Management On Incomplete Forward Curves