The recent rise of dry bulk cargo ocean freight rates is a consequence of the current global bull market. Starting in Q4 2020, the Chinese economy surged with renewed and increased consumption needs, while in parallel, the hog industry was recovering from swine flu outbreaks. Consequently, Chinese imports of Grains, Oilseeds, and Vegoils increased massively in 2021. However, this generates an abnormal amount of vessels arriving in Chinese ports, provoking significant port congestion, demurrage charges, and a shortage of available ships, contributing to the increase of freight rates globally.

Therefore, one can wonder if the rising freight rates and the congestion in Chinese ports have impacted the vessel size on which traders ship their cargoes? And if not, why?

South American exports to China are an apt case study to analyze the relationship between freight rates and vessel sizes as Brazil is the most important origin for Soybean to China.

Read also: How Is the Brazil Soybean Cash Market Structured during the 2021 Harvest?

In the past four to five months, ocean freight rates rose rapidly across all vessel sizes, commodities, and export origins. 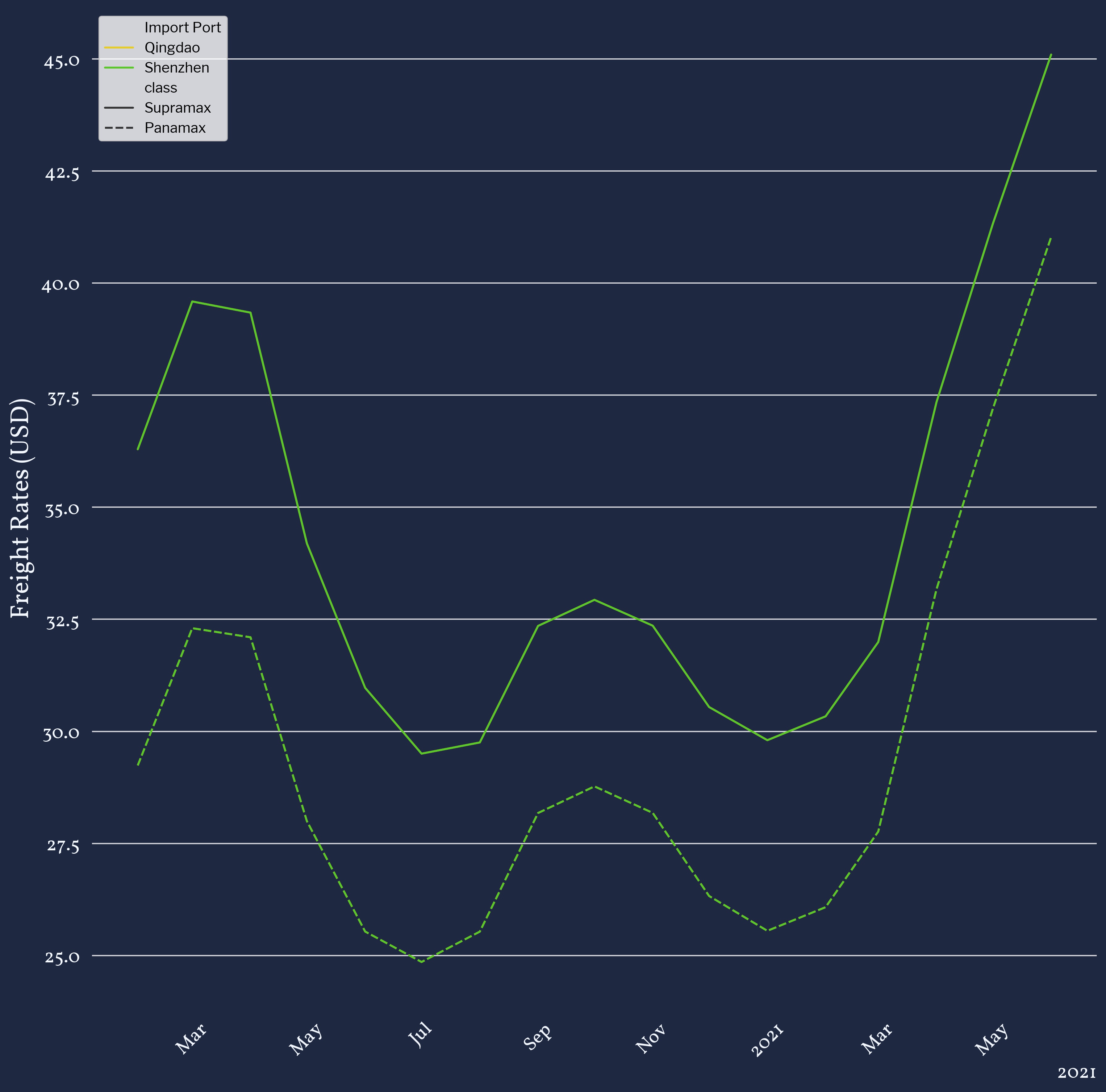 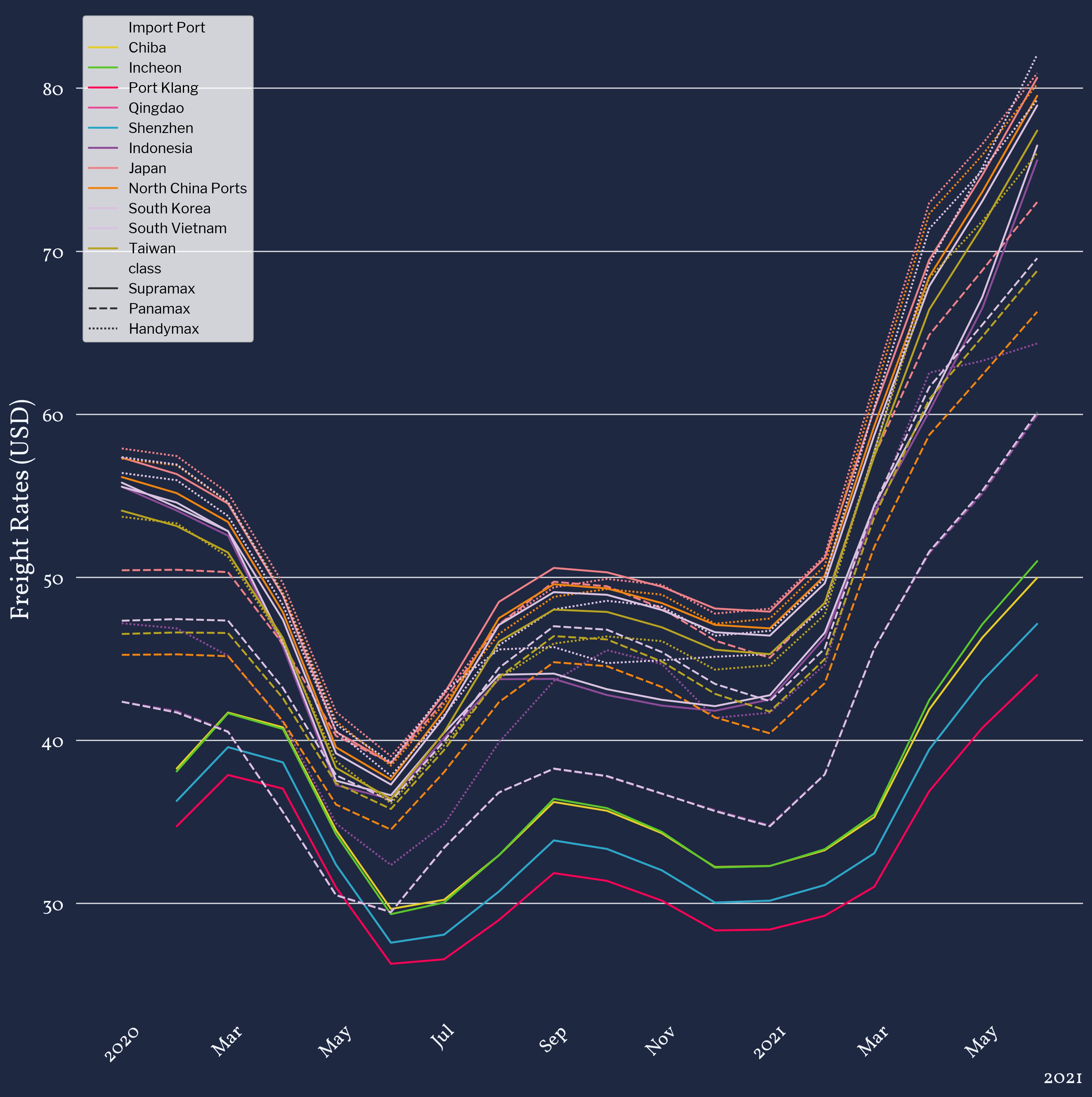 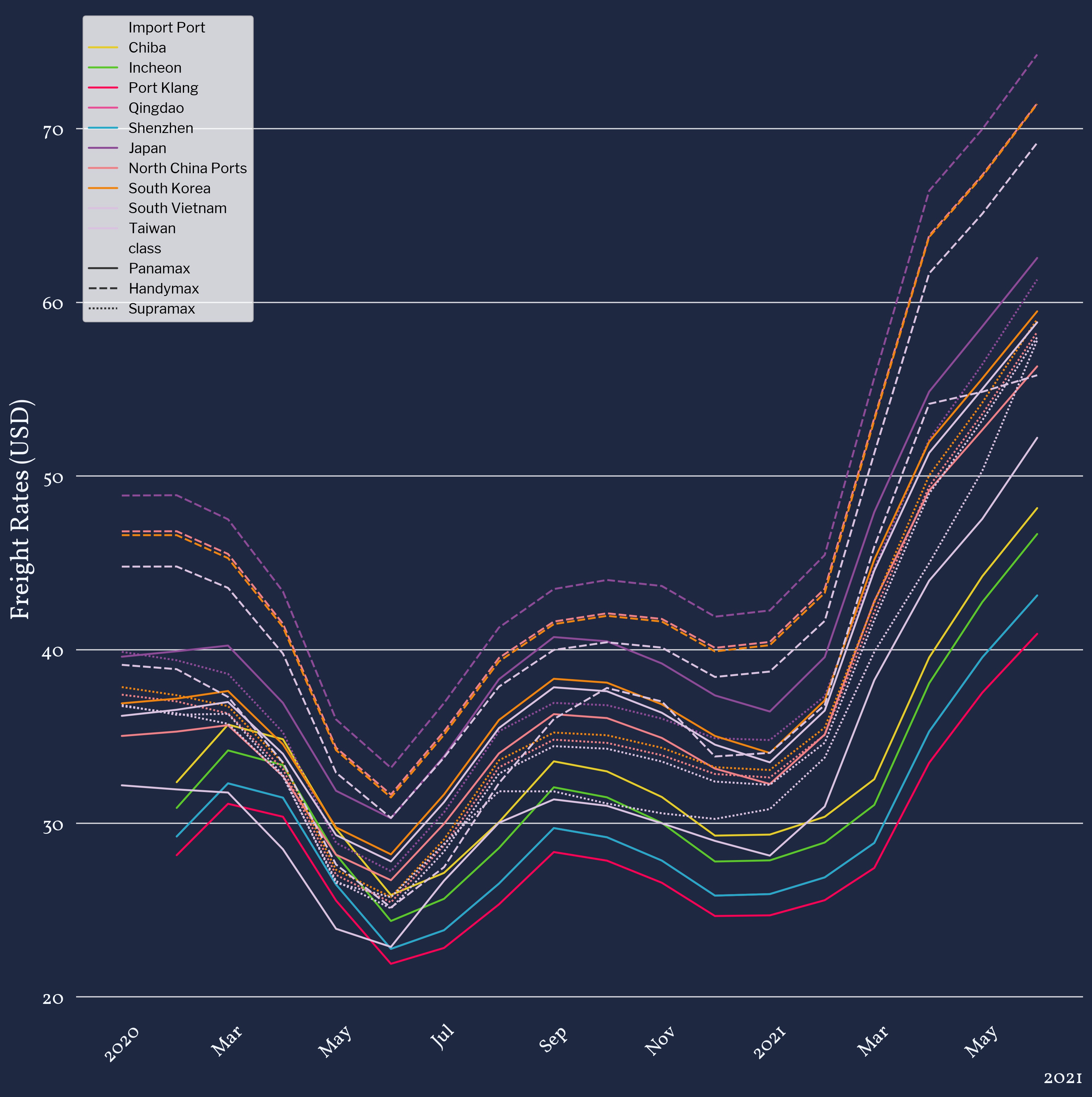 The various freight rates, destinations, and vessel size/class combinations also show a pattern. Indeed, most of the freight rates for Panamax vessels did not increase as rapidly and significantly as the other vessel types. The flatter curves for these Panamax freight rates indicate more availability on these routes for this vessel size. As such, this pattern implies that traders might want to shift towards Panamax vessels for their executions for these routes and commodities.

Following the spot freight rates, the number of freight quotes for Panamax vessels should increase with time, as it provides a reduction of the cost per ton for traders’ executions. 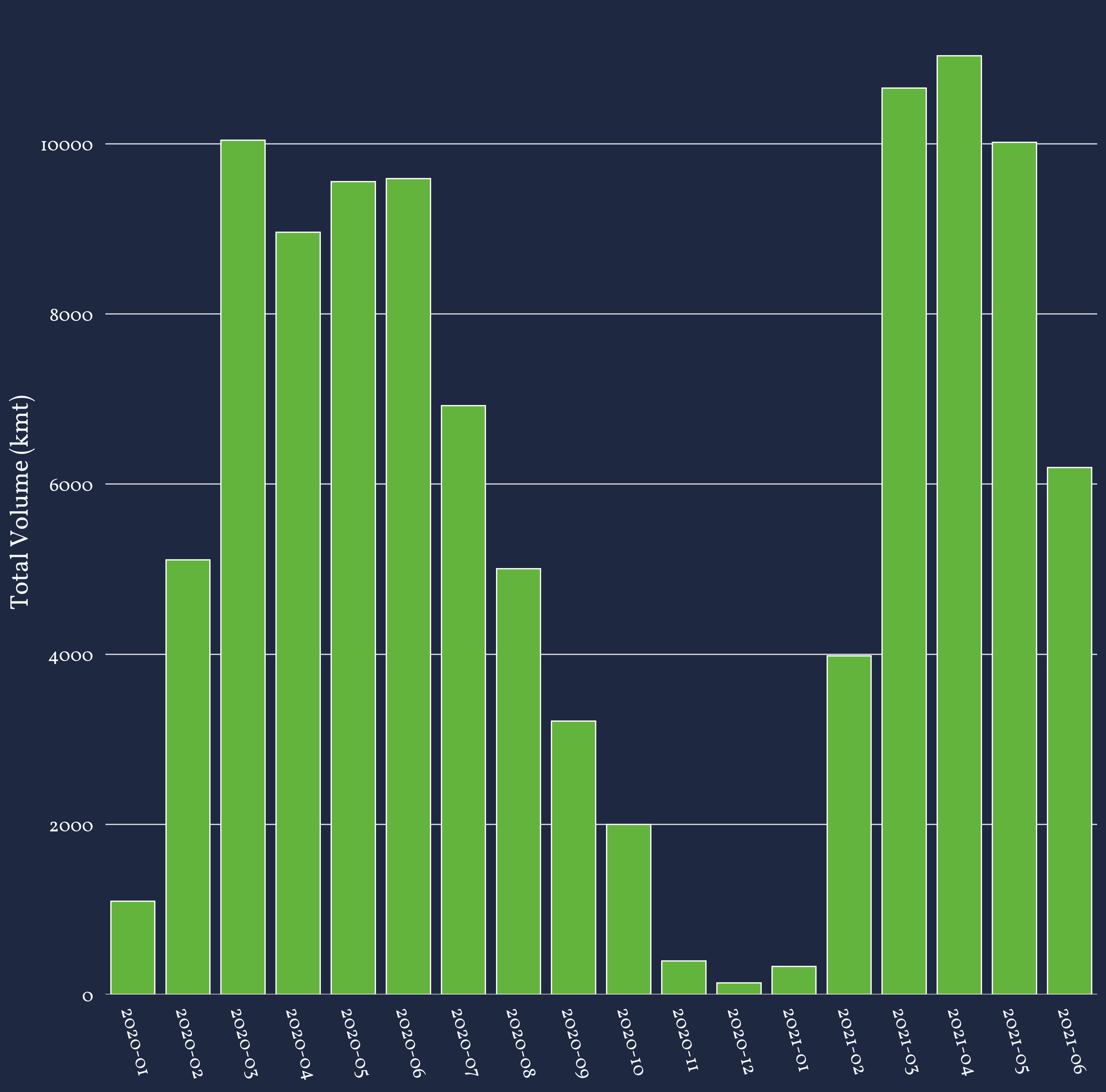 The total volume of dry bulk cargo displayed in Figure 4 consists primarily of Brazil Soybean shipments. The monthly export volume intensified in 2021 compared to 2020, with 3.15 Mmt (~11%) more volume exported from March to May, but the export volume only increased 4% when looking at the period between May and June. Therefore, the increase in spot freight quotes at the same period is related to the Chinese demand. Nonetheless, the average size of shipments did not increase but was roughly identical in Q2 year-on-year, as shown in Figure 5 below. 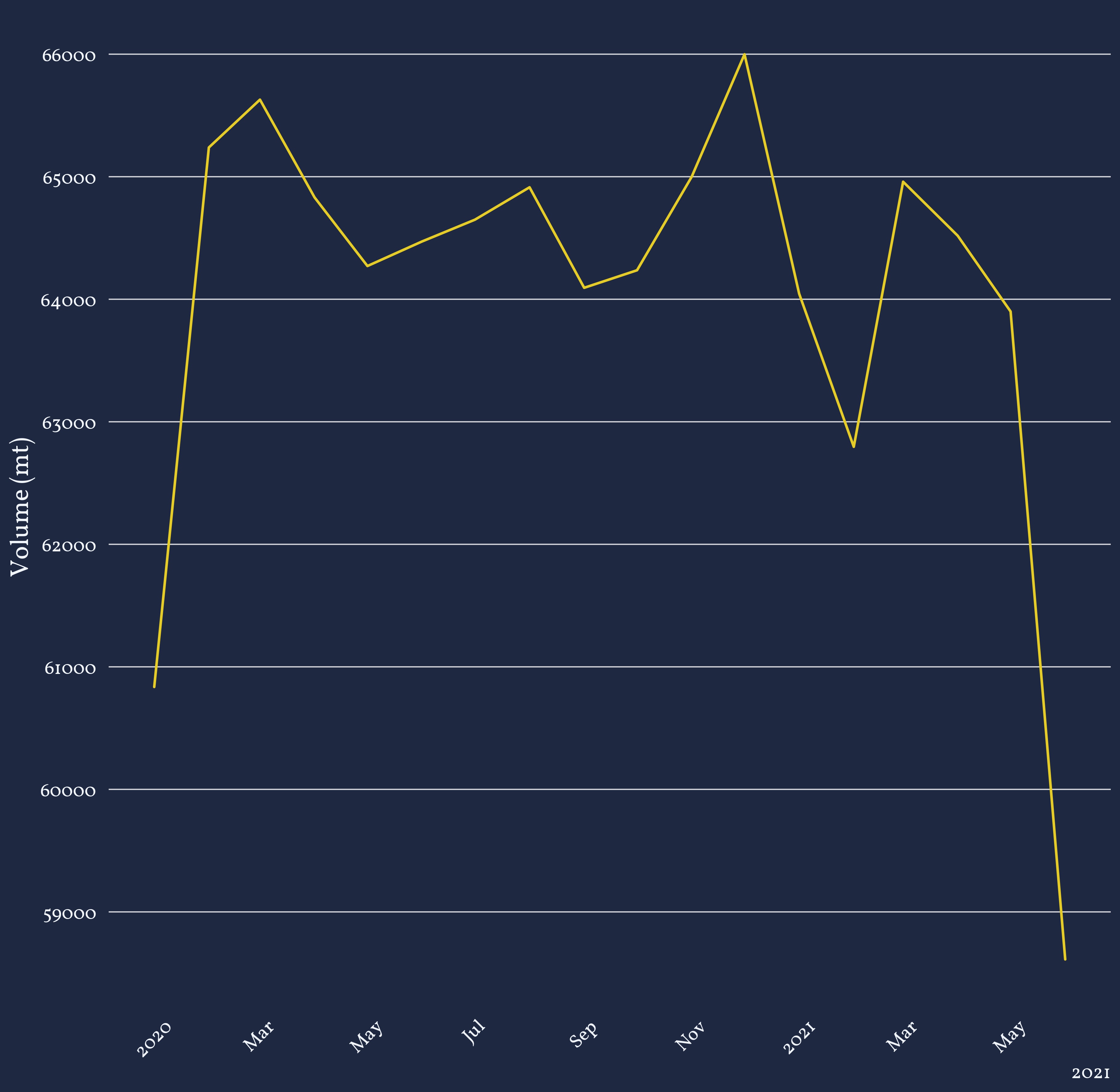 Indeed, the difference between the average volume of Brazil Soybean shipments to China in Q2 is about 450t or approximately a 1% decrease. As such, it does not appear that traders ship cargo on larger than usual vessels as Panamax-sized vessels seemed to be preferred already. Instead, the number of ships increased by 16% year-on-year from March to May 2021 to meet the increased demand.

The increased number of Panamax vessels shipping Soybean also explains the popularity of Supramax freight quotes. Since the Soybean export market occupies more Panamax vessels than previously, traders need to deal with the unavailability of Panamax, thus turning towards Supramax for other commodities, such as Corn or Soybean Meal.

Read also: A Guide to Chemical Tanker Types for Palm and Edible Oils

Track Shipments From South America
to China, Japan, or Indonesia 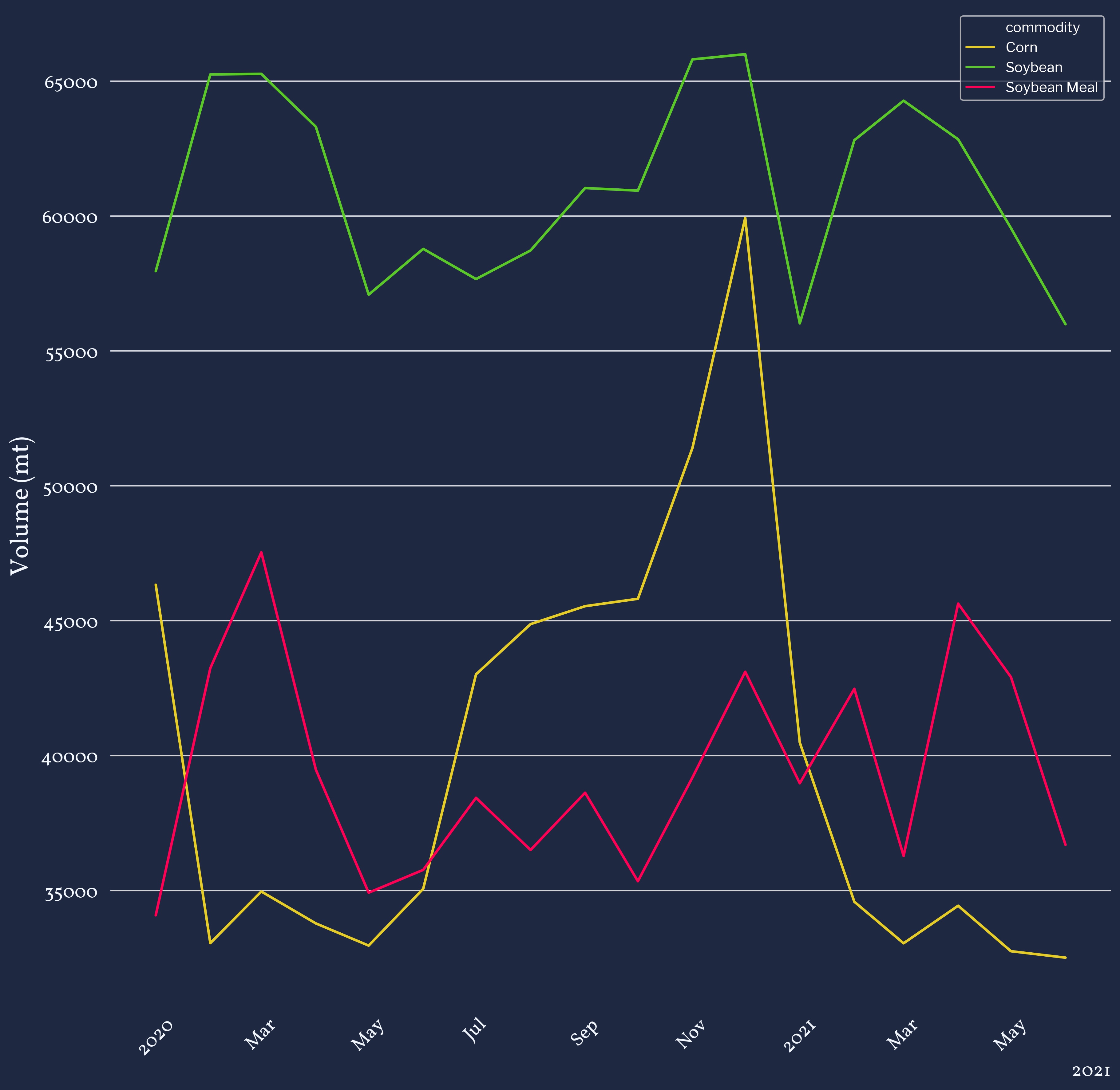 However, in June 2021, the average shipment size decreased for all commodities. In June, the congestion in Chinese ports reached its longest waiting period, with 14 days of waiting time in Yantianthus exacerbating the vessel unavailability.

In South America, quotes for dry bulk cargo ocean freight rates showed that the demand for Panamax vessels to China grew significantly in 2021. Additionally, Panamax and Supramax vessels were the most sought-after to ship to Asia.

Delving into the monthly shipment volumes revealed that the demand for Soybean, representing the vast majority of exports from Argentina and Brazil combined, did not rise significantly. In contrast, the intensity of exports in Q2 2021 did.

Nonetheless, the average shipment size remained roughly unchanged due to the number of unique vessels out of Brazil increasing 16% at the same period.

Finally, the increased number of freight quotes did not change the size of vessels on which traders ship their cargo, as they were already primarily using Panamax vessels. However, with the Chinese demand remaining strong and the congestion in ports not being resolved, traders will have probably have to shift to smaller-sized vessels.